For our transfer day we decided to have a brief pre-breakfast walk in the grounds of the hotel, so we met at 6:30 am in the car park. Dozens of birds were zooming around, calling, singing and feeding. Our only new bird for the list was a Legge’s Flowerpecker, we saw both the male and female feeding in the trees. Other birds of note include Hanging Parrot, Scarlet Minivet, Common Tailorbird, Alexandrine Parakeet, Pale-billed Flowerpecker, Oriental White-eye, Black-hooded Oriole and lots of others. 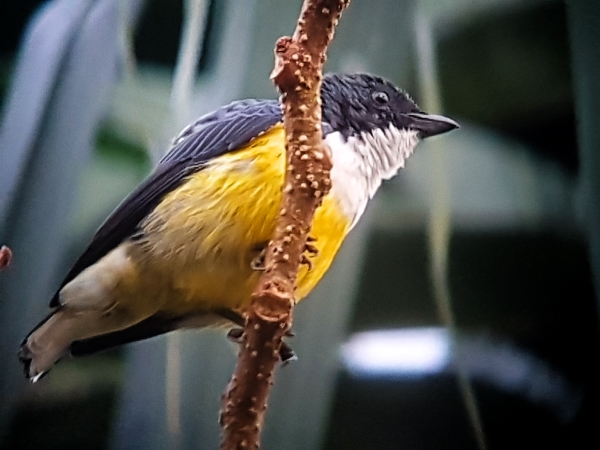 By 8:30 we were loaded into the bus and set off on our way. The journey was to take a couple of hours but we made several stops along the way which increased our travel time. Our first stop was to watch a colony of Chestnut-headed Bee-eaters, they performed very well as they were building nest-holes in the roadside bank. 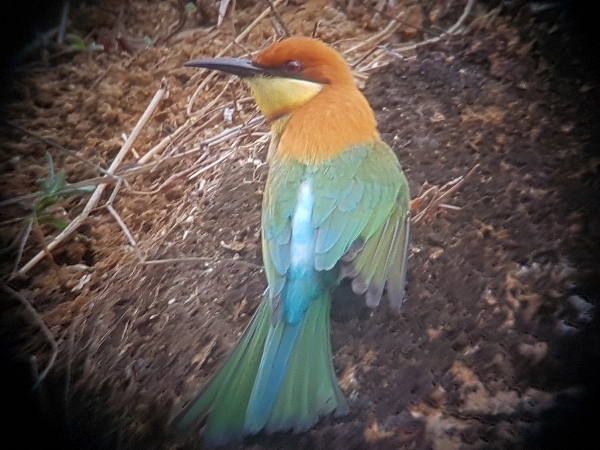 We stopped briefly to look at the magnificent ‘Devon’ falls and then across the road we visited a Tea Plantation where we drank a nice cup of tea. We noted our first House Sparrows, also Loten’s Sunbird and we saw Brahminy Kite and Crested Serpent Eagle circling over the hills. A Banded Bay Cuckoo called all the time we were there but we had no sighting of this elusive species. 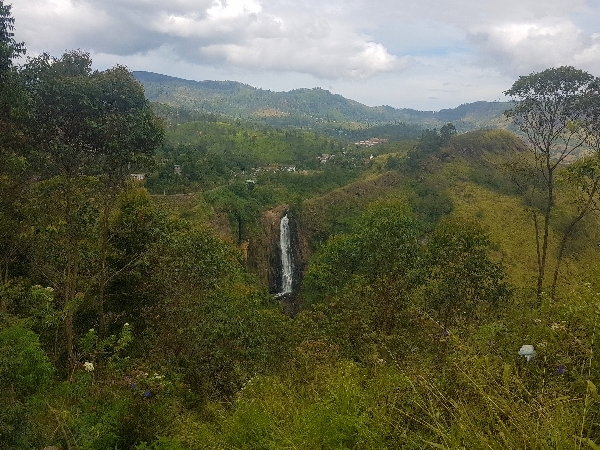 the Devon Falls, it was much better than this phot portrays 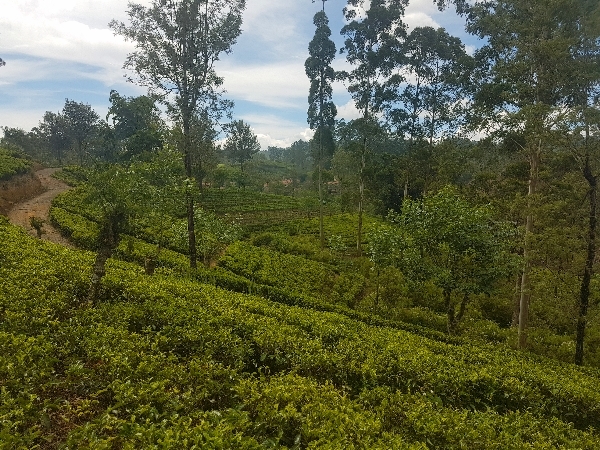 We drove through some beautiful lanscapes and we climbed into the mountains. The mountain sides we covered in tea bushes as far as the eye could see, with many trees lining the fields. As we passed through one town we were held up by a marching worker's group who were striking over 'low-pay'. Most plantations are owned by politicians, so not much hope there!

We arrived at our Hotel on the shoreline of Lake Edward in the centre of Nuwara, where we quickly found a Pale Prinia, Pond Heron, Little Cormorant,  Hill Swallow and more House Sparrow. A White-bellied Sea-Eagle was seen from the bus as we passed a lake. 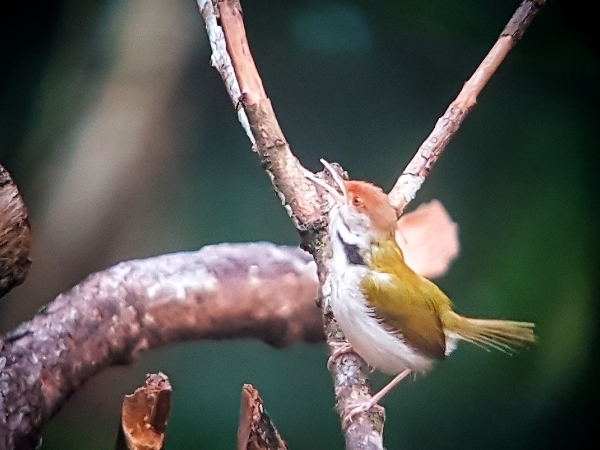 After checking-in we drove into town to buy lunch noting a Grey Wagtail on the driveway of our hotel, we returned to the hotel for our midday break, from then on it was dull and overcast for most of the day with a little rain.

Our birding excursion was a 10 minute drive from the hotel along a quiet lane on the edge of town, we quickly found several interesting species. A Dusky Warbler was ‘tacking’ from the scrub but refused to come out but we did see our first endemic Yellow-eared Bulbuls, followed by the endemic Sri Lanka White-eye and then the endemic Dull-blue Flycatcher, what a trio of endemic gems. Whilst on the subject of endemics we also saw the endemic Black-lipped Lizard sitting below one of the Yellow-eared Bulbuls. 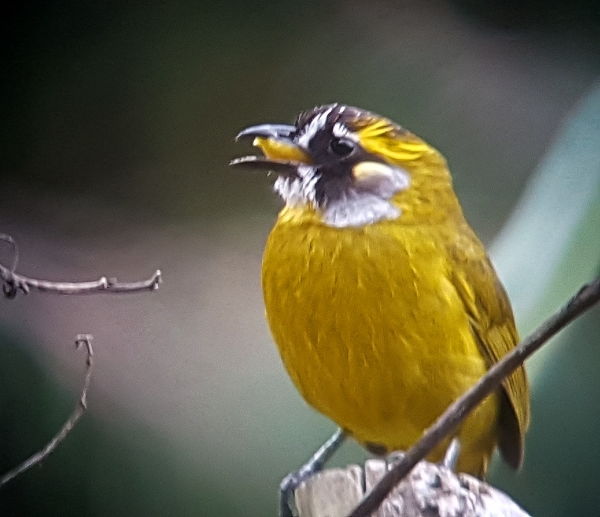 We then walked up the lane into a eucalyptus woodland which covered a steep-sided hillside on both sides of the lane and swept down to a river some 50 meters below us. Dense under-storey was covered in fly-tipping litter down towards the river, how nice. However, the rotting garbage attracted lots of flies and in turn, lots of flycatchers. 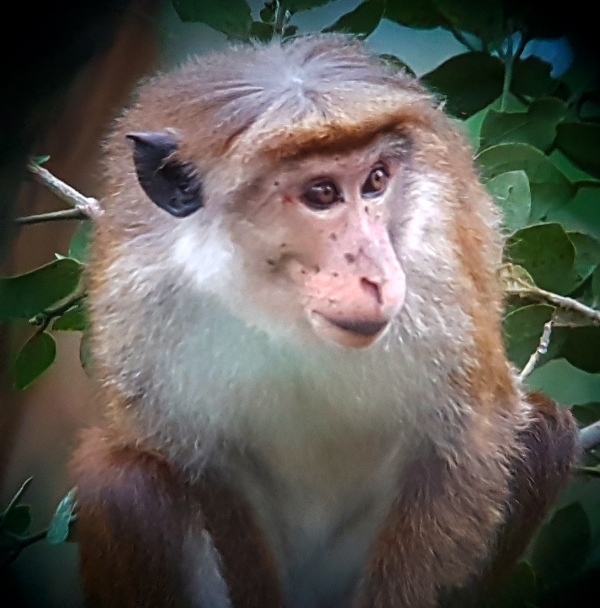 no, not a selfie..... Toque Monkey, we also saw Dwarf Squirrel, Brown Mongoose and Palm Squirrel

During past visits we have seen several excellent species here but not today, it was dull, overcast, with some light rain and not many flying insects which reduced our chances of seeing much.

We did added Great Tit (an introduced species along with Grey Wagtail, House Sparrow, Collared Dove……) to our list and we had very brief fleeting views of Sri Lanka Bush Warbler, yes you guessed it, an endemic, but generally it was disappointing. A Brown-breasted Flycatcher was new for the list and we then had excellent views of the endemic Sri Lanka Scimitar Babbler, what a beauty and so obliging. 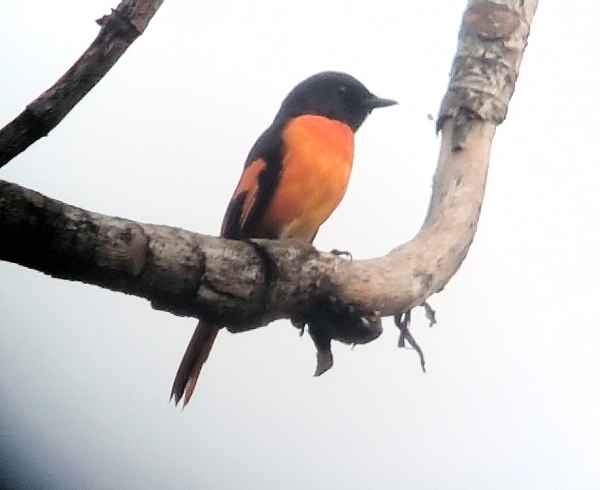 The bird we sought most of all was the Kashmir Flycatcher but it not found, but an equally good find was a Grey-headed Canary-Flycatcher which was found just 3 meters from the bus as were climbing in.

For the last hour of daylight we drove to another area of town where we climbed down a very steep path and stood on or near a bridge over a fast flowing stream. We hoped for a sighting of the secretive Whistling Thrush. When we arrived a birding group from Norway were there just ahead of us, so it was quite crowed down there. 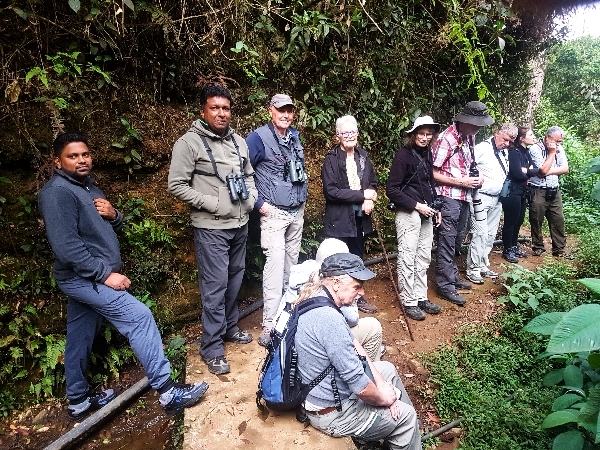 the Whistling Thrush stakeout, some of you will remember this place

We waited and waited and it grew darker and darker, several people gave up, we stayed until last, it started to rain and the bird………..never showed, Ha!  But we did have splendid views of the Indian Blue Robin, a male, it was a fantastic consolation prize.

We ate back at the hotel around 8pm, it was our best meal yet, yummy! Tomorrow we are leaving with our breakfast in a bag at 5am. Good night.