Goodbye to Sinharaja and Martin’s Lodge – transfer to Rockview Motel.

0We were coming down the mountain…………..at 5am we left Martin’s Lodge and took the bumpy track by land rover, the journey on the way down wasn’t so bumpy, it didn't seem so long as the upward journey and we were soon at the bottom. From there our luggage was sent on to Rockview Motel whilst we took another bumpy track up another hillside. The habitat there was more open with lots of small house surrounded  by associated cottage-industry style tea plantations. We stopped after 20 minutes or so at a regular venue of Jith’s. We were to look for Green-billed Coucal. 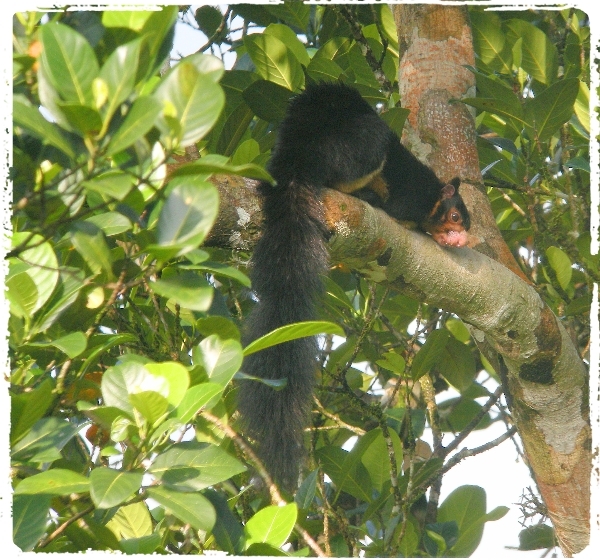 We walked to the backyard of a small house and waited, the light improved as the sun came up but we wouldn’t feel or see direct sunlight for a few hours yet. After a short while Jith drew our attention to the call of the Coucal, two or three were calling nearby. Then we had our first brief sighting soon followed by several good views of one individual which sat out on the open. 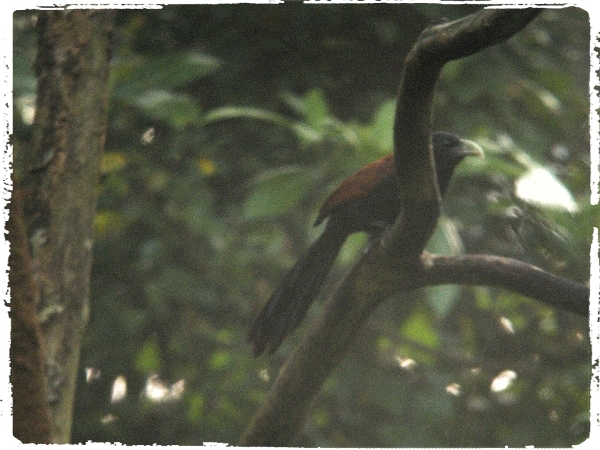 The light was too bad for digi-scoping so my pictures are a bit below par but they are record shots of one of the last three endemic species wanted for our list.

Next we walked across the road to another house, this house had a cleared garden which sloped fairly steeply down to some water. About five Junglefowl were milling around in the open space. Apparently the family had been throwing food scraps from their kitchen door down onto the slope and over a long period of time this had attracted a good number of birds. Three Spot-winged Thrushes joined the Junglefowl as well as Brown-capped Babbler, Indian Blue Robin and a White-breasted Waterhen messed about in the water at the bottom of the garden.

We watched for while then to our surprise and to Jith’s relief a male Sri Lanka Spurfowl appeared at the bottom of the garden. It showed well as it climbed up towards us, what a great bird, the field guide illustration doesn’t do it justice. A female also turn up a little later, both birds stayed in view for 20 minutes, we left them in peace as we quietly withdrew from the side of the house, well satisfied with our sighting. 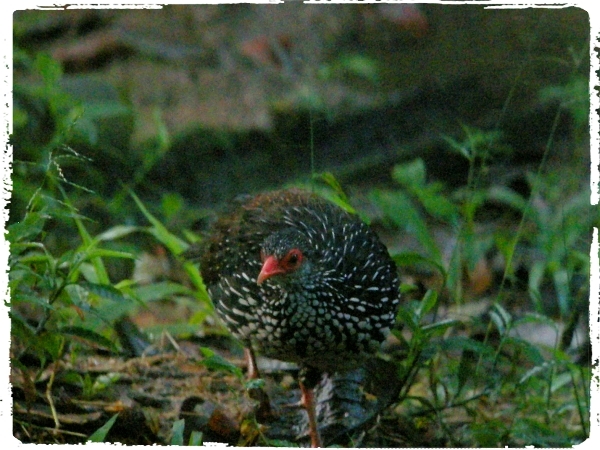 So now just one endemic eluded us, the Serendib Scops Owl.

We walked about a kilometer back down the track which took about an hour because so many species appeared and needed our visual attention. Yellow-fronted Barbets were common as was the endemic Sri Lanka Drongo. We also found Velvet-fronted Nuthatch, Small Minivet, Sri Lankan Grey Hornbill and lots of bulbuls, babblers, sunbirds and Blue-faced Malkoha.

Jith had arranged to meet a local guy who had reported seeing our most wanted owl last night, he was to lead us to the place deep in the forest. My god it was a steep climb, the humidity was about 90% and it was hot even at 9:00am.

It was a difficult climb we scrambled up a very steep dry river bed then through dense bamboo scrub. Finally we caught up the local who had shot up the hillside like a mountain goat. He had relocated the owl……..yes the SERENDIB SCOPS OWL  was sitting some ten meters away from us in dense bamboo. I had struggled up the mountain with my scope but I couldn’t digi-scope in the poor light and through the dense scrub so I just viewed through my bins.

Nevertheless this was a great sighting, our last endemic in the bag, 33 out of 33 recorded, it was a wonderful achievement by Jith. One point of interest, we noted that the owl had ear-tufts which are not shown in the field guide, Jith explained that the illustration shows the owl at rest when the ear-tufts are retracted or laid flat making the bird look totally different from the real-life bird.

Well we were all exhausted from the heat, humidity and the climb but we all agreed that it been worth it.

From there it took just 30 minutes to drive to the Rockview motel, we arrived around 11:30am. We planned to meet again at 4pm for our last excursion in the rainforest area.

The hotel rooms had lovely balconies that overlooked a beautiful green valley with many small tea plantations and clumps of forest. I soon had a nice list of species from our balcony. 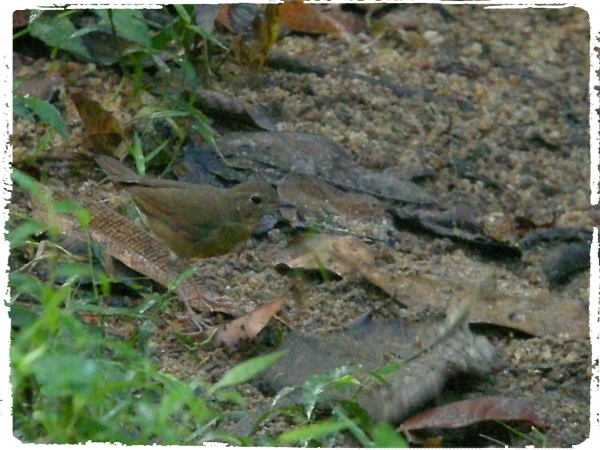 a poor record of a female Indian Blue Robin

At 4pm we set off back along the road toward Sinharaja and stopped as we climbed up into the forest area, our main target was a Sri Lankan Hill Myna, we had seen this species twice before, but we wanted good in-the-scope views.

The area was alive with birds, the usual rush to feed before nightfall brought the trees and shrubs alive with calls and movement. The Yellow-fronted Barbet was very common, we had lovely views of Imperial Pigeon and Sri Lanka Green Pigeon sitting together and one palm held Hanging Parrot, Little Minivet and a Hooded Oriole on the same branch!

We walked a couple of kilometers slowly uphill, hoping to see the Myna, but we failed to find one. As the light began to fade we walked back to the bus and set off for dinner at Rockview.