Wow! That was a hot one! I have been asking for warm sunshine for a while now..... we certainly have it now!!!

Dawn and I drove down to Weymouth arriving about 9:30am, we parked in a side street near the northern end of Radipole Lake. We had chosen a walk with plenty of tree cover and enjoyed the shady parts of the walk, however the first and the last sections of the walk were out in the open. 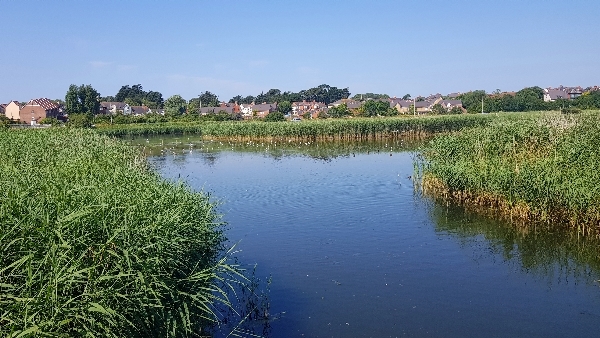 a typical restricted view of the pools at Radipole Lake

We entered the Radipole Lake RSPB Reserve from the entrance along the A354, Weymouth Way. I was hoping for a sighting of a Norfolk Hawker Dragonfly but never saw one. The reserve was alive with birds, the reedbeds were stock-still, not a whiff of air stirred them, some Reed Warblers flitted about, whilst others sang from deep, dense cover. Then we heard the distinctive "pinging" call of the Bearded Tit, a small flock of five birds came very close to the track and gave us short, but excellent views. We saw only juvenile birds and perhaps one adult female, but nevertheless a great sighting. 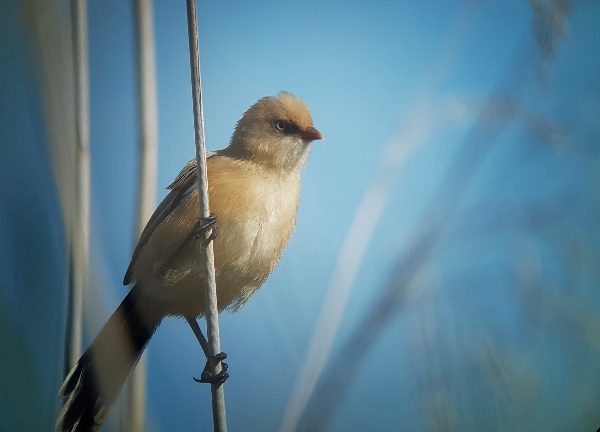 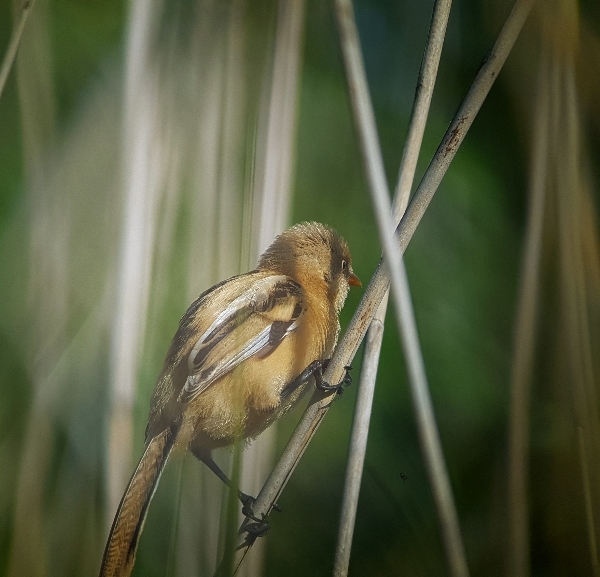 From various view points along the 'Buddleia Loop'  we saw Mallards, Canada Goose, Mute Swan, Little Egret, Cormorant, Teal, Tufted Duck, Great Crested Grebe and lots of Black-headed and Herring Gulls. Cetti's Warblers called from several sites along the path we saw them dash ahead of us across the track once or twice. 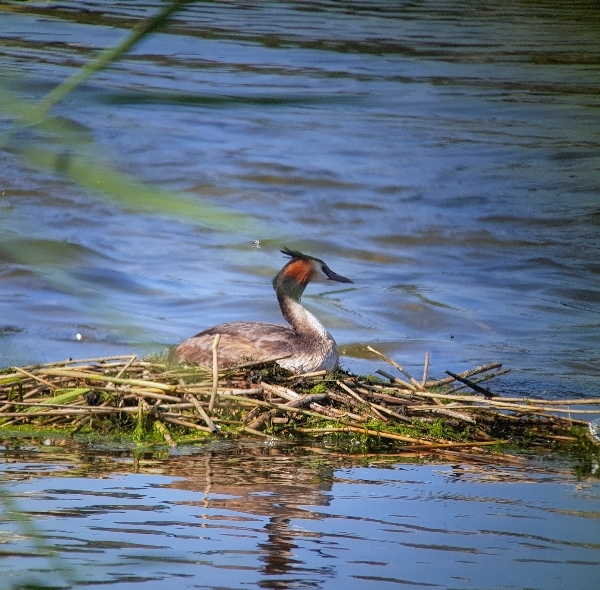 Great Crested Grebe on the nest, perhaps a little late in the season to be successful?

At the visitor's centre at the main entrance we stood on the wooden Bridge to scan the main lagoon, most of it was obscured by the reeds, but we did manage to see 3 Little Egrets, a Great Egret, Grey Heron and more of the same as listed above. 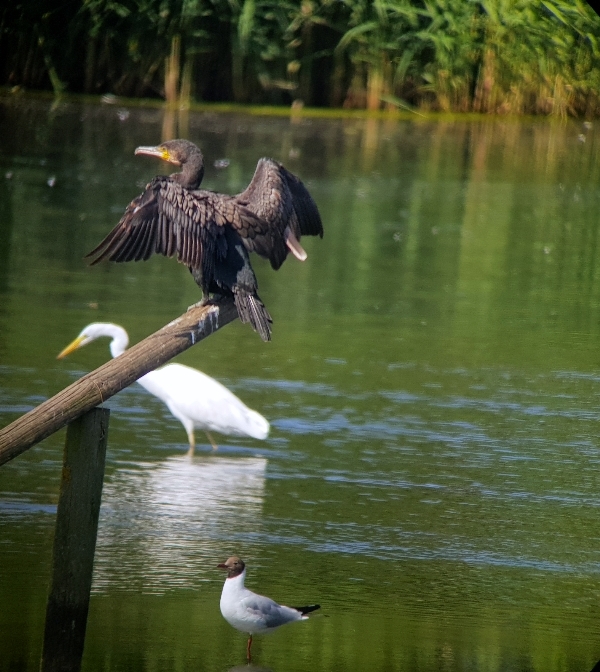 Great Cormorant, Black-headed Gull and an out of focus Great Egret, taken from the bridge at the Visitor's Centre

From Radipole we walked to the beginning of the Rodden Trail and headed off towards Ferrybridge, this trail is a disused railway track and is 2 miles long, it passes Sandsfoot Castle, Weymouth Sailing Club and runs along most of the northern shore of Portland Harbour.

Sandsfoot Castle is about a mile along the track and the perfect place to stop for a rest and resfreshments, it was only 11am but surely not too early for an ice-cream on a hot day? 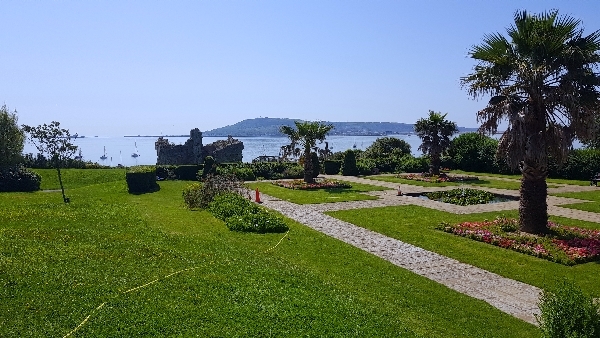 the gardens and Sandsfoot Castle ruins with Portland Harbour and the 'Isle' of Portland in the background. 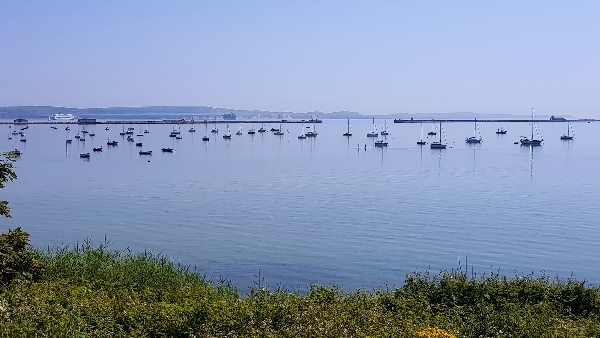 Portland Harbour looking eastward to Weymouth Bay, you can see the  Victorian-Built Harbour Walls and how flat-calm the sea is!! It was amazingly tranquil.

The rest of the walk was uneventful until we got to Ferrybridge, we did see a lot of common butterflies, Red Admiral, Large Whites, Meadow Browns, Speckled Woods, Gatekeeper, Ringlets, Small Skippers and Marbled Whites.

We stood on the actual Ferrybridge and scanned the mudflats, the air was clear, there wasn't a heat shimmer so all the roosting birds were quite clear, albeit a little too distant.

For the last few days a number of ROSEATE TERNS have been frequenting Ferrybridge,  they had also been seen along the Fleet at Abottsbury and at RSPB Lodmoor, at least four were seen at Ferrybridge yesterday!! We hoped to find them today, I had carried my scope all the way from Weymouth so that I could sift through the hundreds of birds out on the mud. 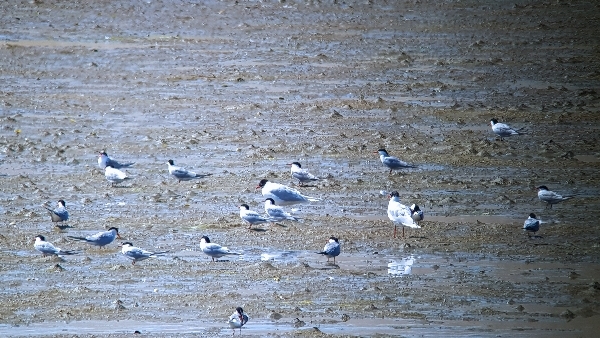 Well I spent half-an-hour looking at dozens of Common Terns, Little Terns, a few Sandwich Terns, mixed in with dozens of Mediterranean and Black-headed Gulls, but not a single Roseate Tern was present!! 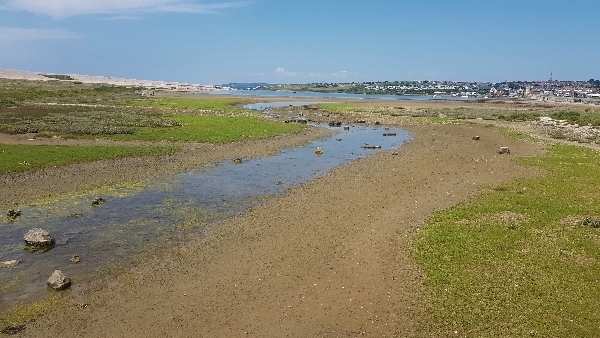 a view of Ferrybrdige from the footbridge near the visitor's centre

We walked up to the Cafe and Visitor's Centre at the main car park and met up with Guy Campbell, we knew he was in the area and had arranged to meet up. We had lunch in the cafe before more birding. Dawn remained in the shade whilst Guy and I walked along the edge of Chesil Bank to get nearer to the terns and gulls. 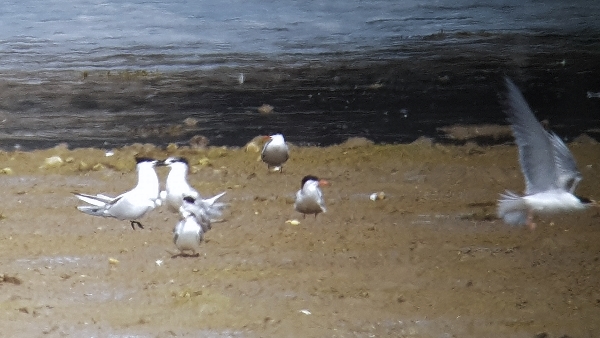 We found a flock of 30+ Dunlin, 2 Sanderling, 4 juvenile Redshanks, a single Turnstone, several Oystercatchers and a dozen or so of Ringed Plovers. The Terns were nearer and despite intensive searching we could not find a Roseate Tern. Other birders came by and got the same result, we came to the conclusion that the birds had flown off yesterday evening, Doh! 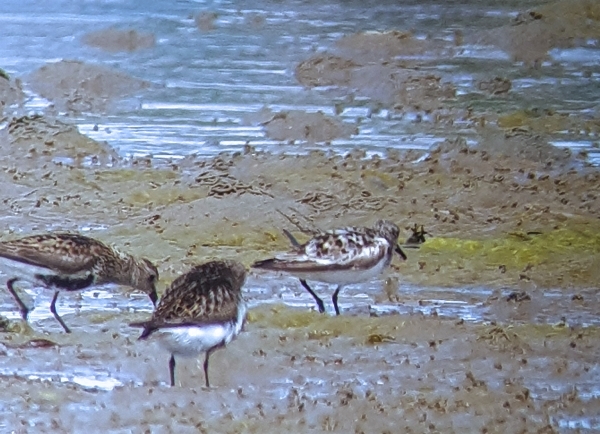 Dunlins with a moulting Sanderling 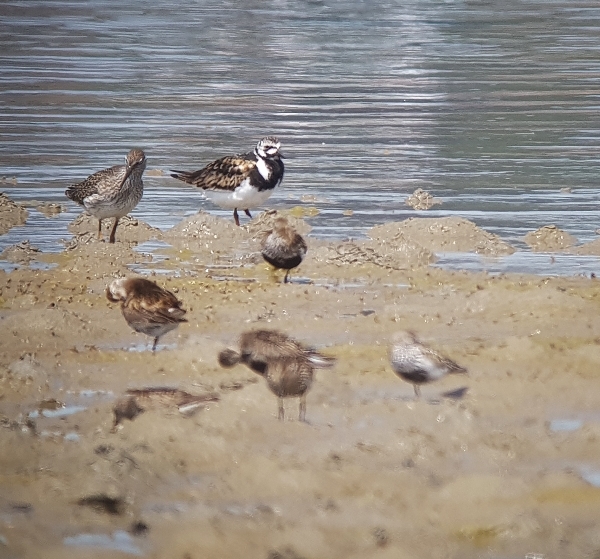 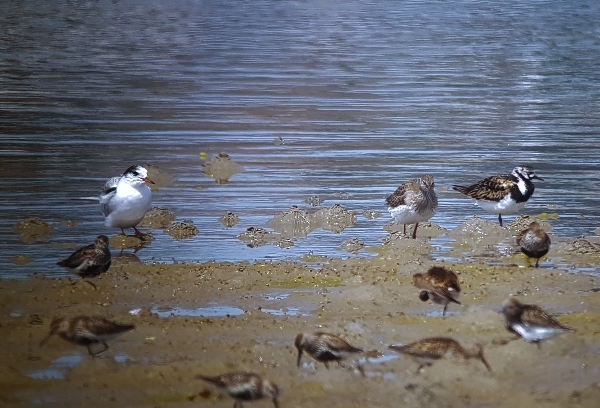 as above with juvenile Common Tern 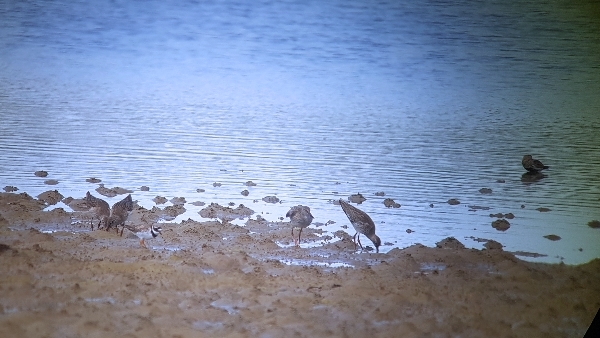 four juvenile Redshank, with a Greater Ringed Plover and a Dunlin in the water 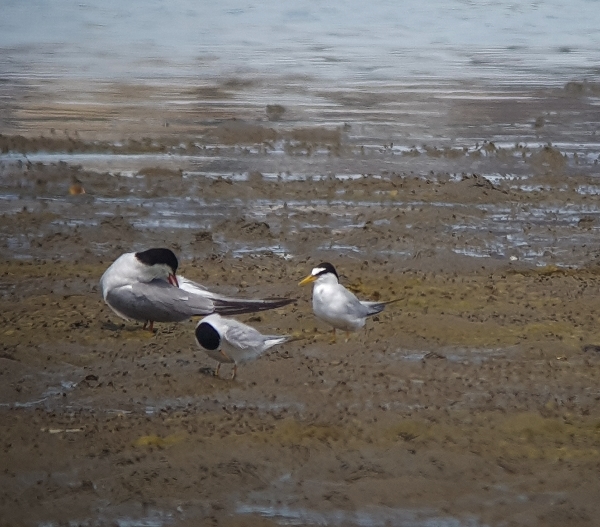 After more scanning from the roadside Dawn and I started our walk back to Weymouth, Guy set off for home in his car. It was even hotter on the way back but we survived, we had plenty of water and some shade. At Radipole I added Greenfinch to the day list but not much else, a breeze was now moving the reedbeds, we did however, see two more Bearded Tits just before we left the reserve and we heard Blackcap and noted a Chiffchaff in the bushes. 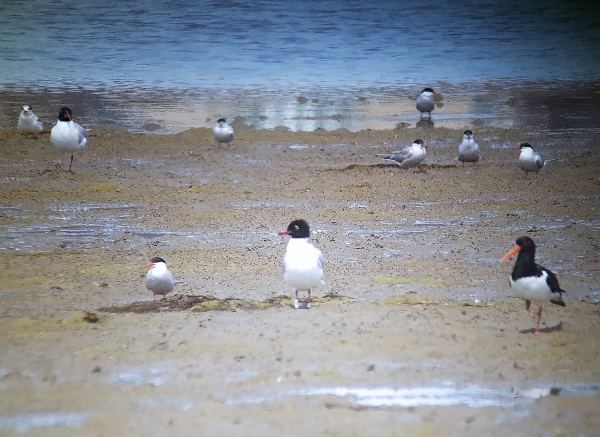 Oystercatcher with two Mediterranean Gulls and some Common Terns

We were back home at 4:30pm, I sat on our garden bench and sipped a nice cold beer, aaaaaaaaaaaaaaaah!!