MORNING WALK SHERBORNE TO TRENT AND BACK

These glorious mornings will go down in history, it appears that this is the driest May for a very long time, long may it continue (pun intended).

I drove 5 miles to Sherborne and parked on the western edge of town where a bridleway runs all the way down to Trent some 3 miles away. The track passes through large arable fields of wheat with tiny margins for set-aside, it climbs steadily to the top of a ridge. A wooded section is draped over the top of the ridge which breaks into scrubland on steep side grass meadows. The view from the ridge, called Charlock Hill, is spectacular, there is a lot sky in view too, an excellent place to sit and watch passing migrants on a good cloudy day. 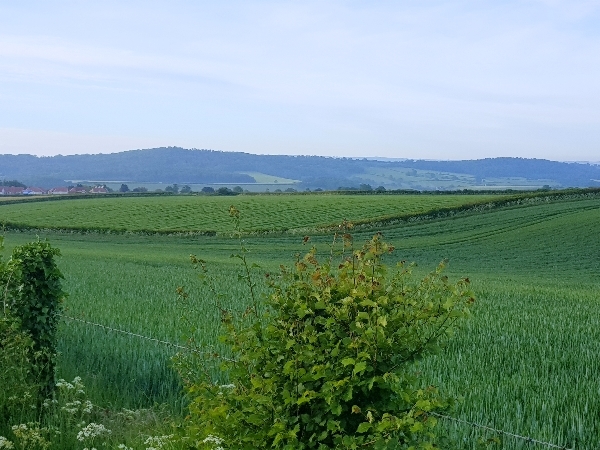 Looking from the track back towards Sherborne

The first part of the track was alive with Yellowhammers, Common Whitethroats, Dunnocks, Robins Wrens and a few Great Tits. I saw Pheasants and Partridges in the fileds and lots of Skylarks were singing from high above me. A stag Roe Deer was a nice find, I saw him first so I managed a couple of photos before he loped off.

Then a falcon flew along the hedgerow towards me, I was hoping for it to be a Hobby but it turned out to be a  Common Kestrel, which in itself, was a great sighting as it was my first one since lockdown began. Can you believe that a very common bird in bygone days has now become so scarce in recent years. It has taken me 65 days to see just one!!

Likewise the Corn Bunting, which was my main target bird of this morning's walk. It hard to understand that the bunting has gone whilst, Yellowhammer, Skylark, Linnet, Goldfinch and Common Whitethroat remain in good numbers. The arable habitat is still there but obviously not the nest sites or most probably the source of food. Corn Buntings nest on the ground like Skylarks but they prefer dense grass meadows which are usually grown for silage. As the Corn Bunting is a late nester (end of May through June) very often the fields are mown at that time destroying their nests. A careful land management plan has to be in place for the survival of the Bunting. 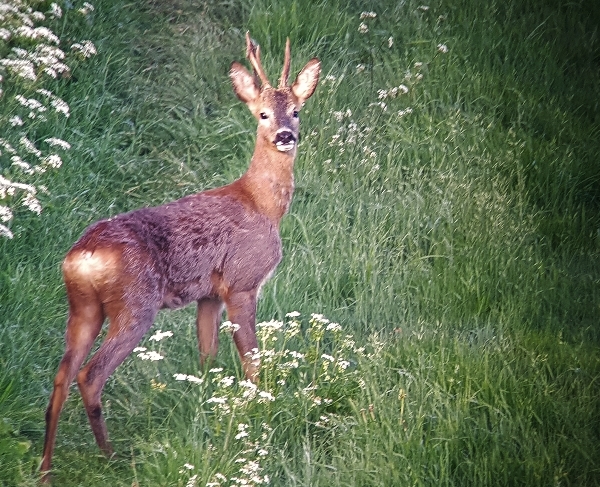 I walked through the wood where I saw Song Thrush, Blue Tit, Great Tit, Robin and not much else except for a large area covered in Bluebells, on closer inspection I saw that they were the invasive Spanish Bluebell with a tiny amount of the native Bluebell in with them. 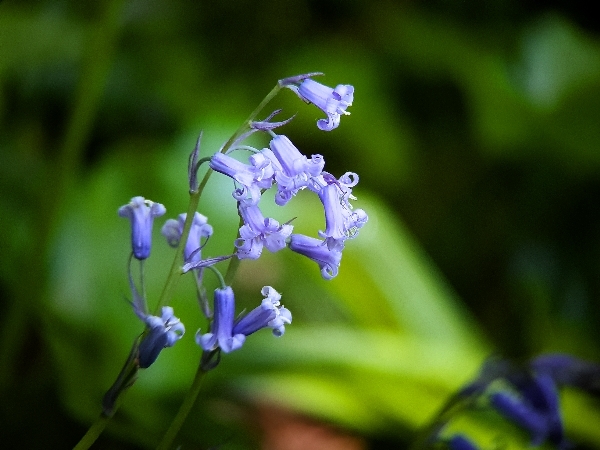 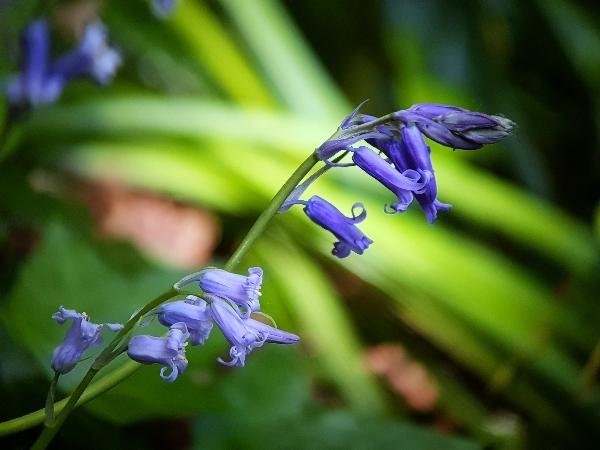 Spanish Bluebell with the native species behind it

Once I was back in open countryside I had a beautiful view in front of me, I could parts of Yeovil looking past the small Hamlet of Trent. Immediately in front of me was a steep sided hillside with clumps of bramble and scattered Hwthorne bushes. It was alive with Common Whitethroats, Linnets and Goldfinches. I then heard a Cuckoo calling from my right, whilst I search for it the bird flew from the top of a tree, right over me and landed 1/2 mile away on a dead branch. It really was too far away for a decnt picture but nevertheless  I attempted one. 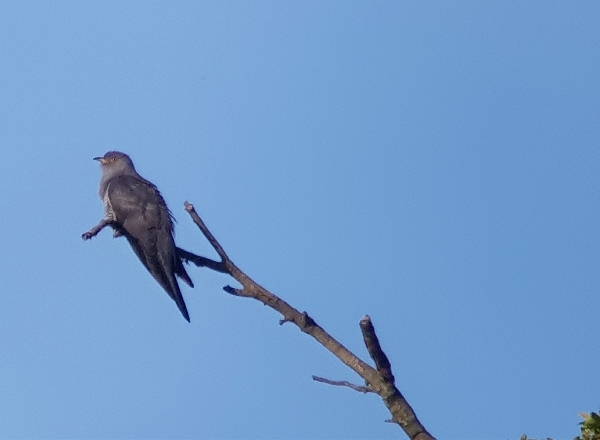 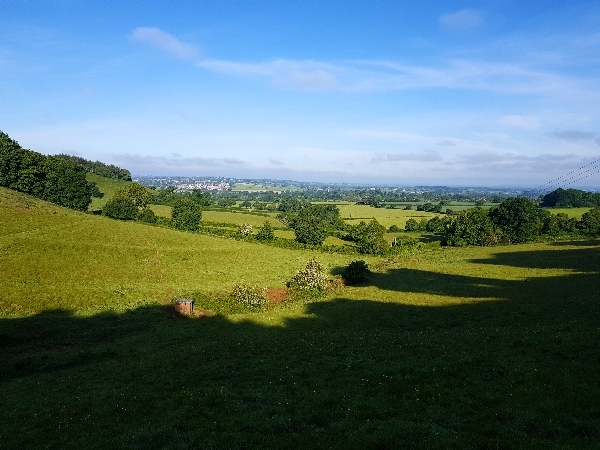 The view from the top of the rdige, you can see Yeovil in the distance 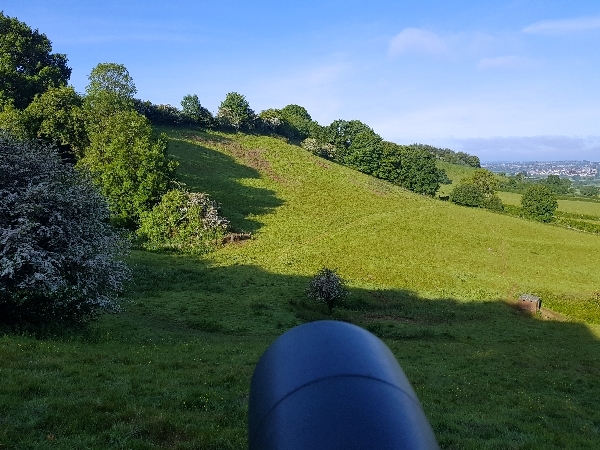 looking across to the Cuckoo, it was in the trees on the horizon

I mooched around in the grassy meadow, checking for Lesser Wghitrthroat or even a Grasshaopper Warbler but I saw or heard neither. The Common Kestrel reappeared and wind-hovered at the top of the ridge, perfect for a photograph, but I was too slow and off it went! 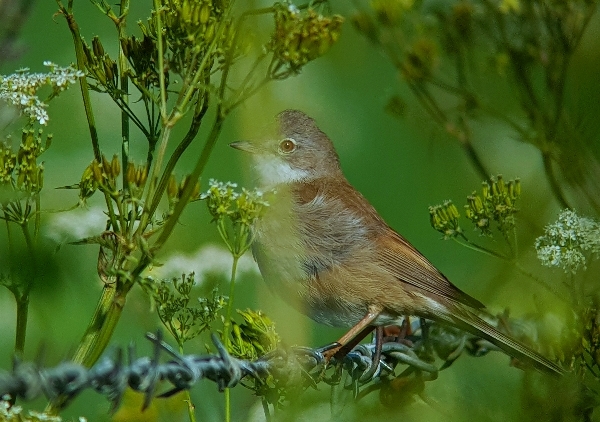 Before I left the ridge I watched Common Buzzard, Herring Gulls, Ravens, Crows, Rooks and Jackdaws all flying over enjoying the uplift of warm air coming from the steep-sided hill. 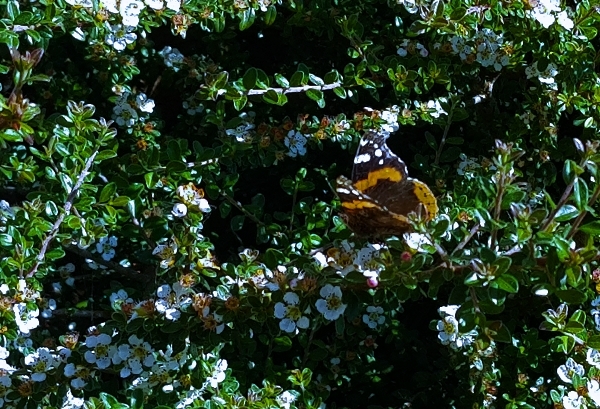 my only picture of a Red Admiral this year!! and a bad one at that!!!

On my way back I saw Stock Dove fly over, a second Deer in the fields, also a lot of Yellowhammers, Skylarks and Common Whitethroats. I got back to the car around 9:45, I had walked five miles and was now ready for a midmorning cup of coffee.

The cloud that had gathered over the ridge, disappeared, the air warmed up and sun came out in full brilliance, how lovely was that?