This was certainly a game of two halves! The first half was spent walking along my local patch and the second half was spent in some wonderfuil open meadows near Ilchester which is 6 miles from our home.

I got up early and was outside by 6am. The usual Goldcrest was singing in the Sycamore tree and I could also here Song Thrush, Blackbird, Robin and Wren. 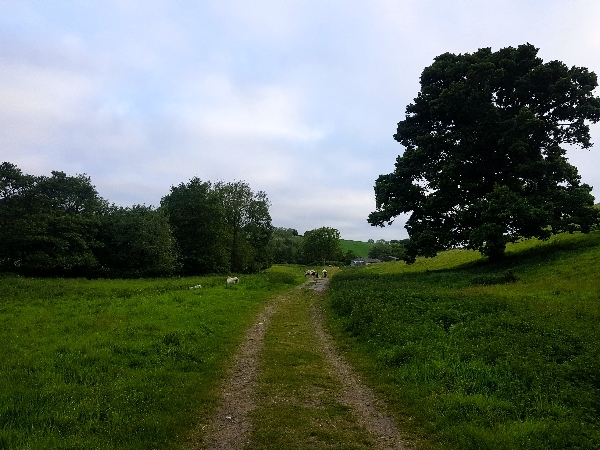 As I entered the track a flock of six Mute Swans flew over, they sounded like a a group of asthmatics after a hundred meters dash, wheezing along on the breeze! 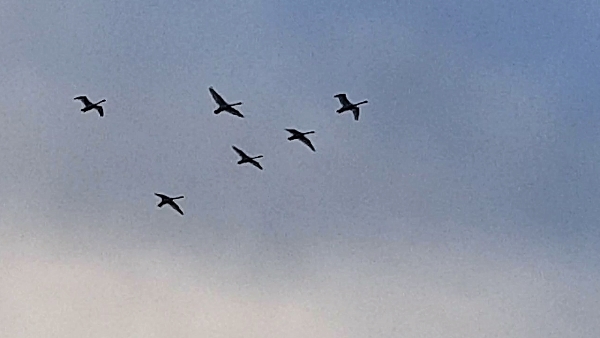 six Mute Swans flew over me

I spent some time at the Nuthatch nest with no luck, so I made my way to the Kingfisher nest site, I saw Long-tailed Tit, Great-spotted Woodpecker, Treecreeper, Chaffinch, Grey Wagtails and Blue Tits along the way. I set myself up with the scope at the ready, I had good views of the Kingfisher's nest-hole and the 'perch' I has stuck into the bank just below the nest. 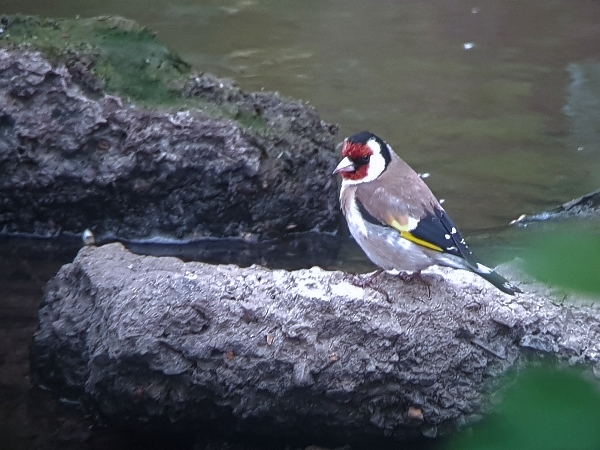 a Goldfinch came down to the stream to drink

After 10 minutes I was distracted by my favourite Wren, this little fellah had had his nest ripped to shreds by something unknown a couple of weeks ago. He then built a new nest across the stream, but today he was rebuilding the original nest. 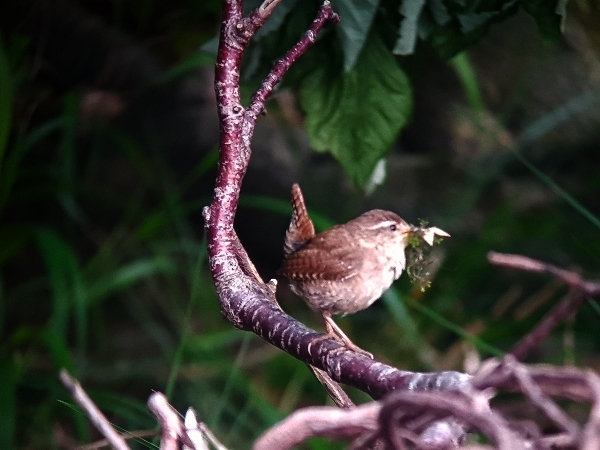 I couldn't keep my eyes off him as he arrived every couple of minutes with new nesting material, he found my Kingfisher 'perch' quite useful. Over the next hour he arrived 31 times with nesting material ranging from large leaves to delicate strands of moss and lichen. 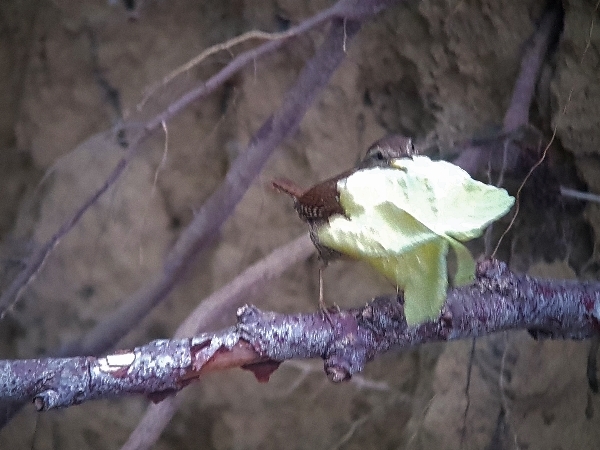 this leaf was bigger than him 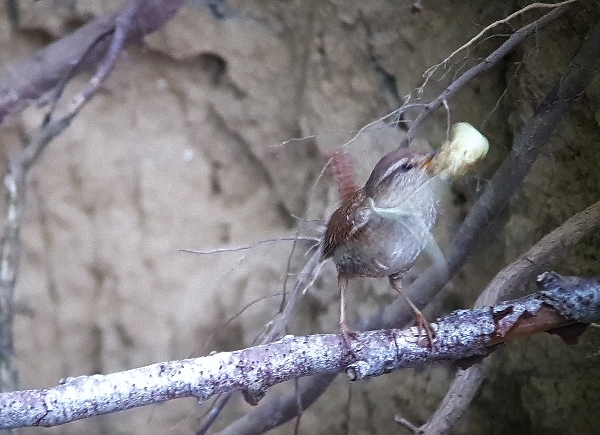 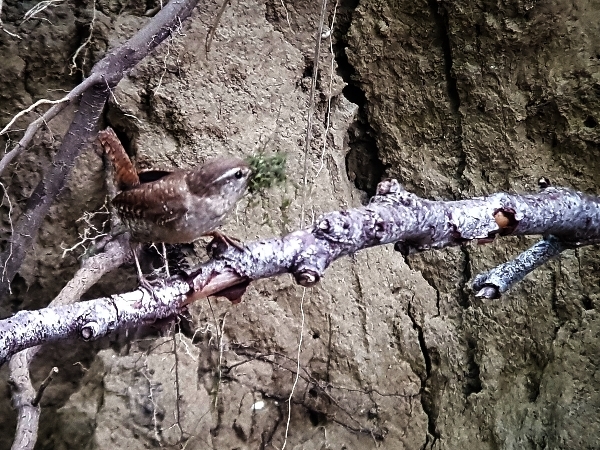 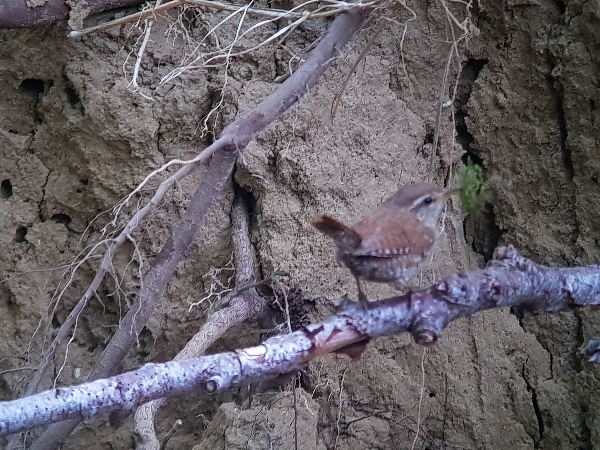 It was because of him that I missed my photographic opportunity of the Kingfisher!! I wasn't focused on other things happening around me, the Kingfisher flew in, made a bee-line for the nest hole, saw me and dropped down onto to a lower perch. I knew that if I moved he would be gone, he had already clocked me, I blinked and off he went, never to return. Doh!!!

I really do not think that the Kingfisher's eggs have hatched just yet, otherwise they would be arriving every few minute instead of once or twice an hour.

Down at the River Yeo I saw another Kingfisher carrying food, there is obviously two pairs here, the second pair have a nest somewhere down-river where I cannot go, it is on private land and I would have to cross the stream to get there. 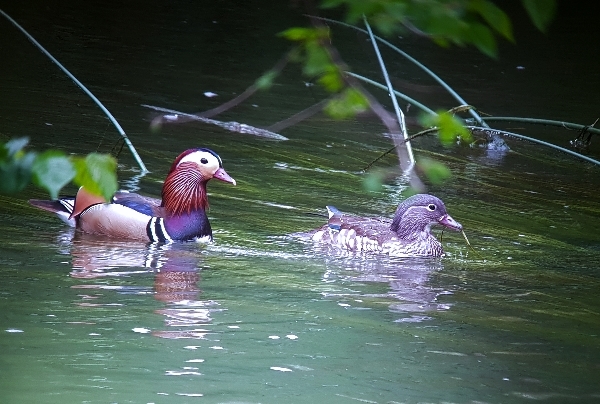 I noted at least three Gt Spotted Woodpeckers drumming and managed to get a picture of one of them. The Cuckoo also called from in the distance, Blackcaps and chiffchaffs were also very vocal throughout my walk. 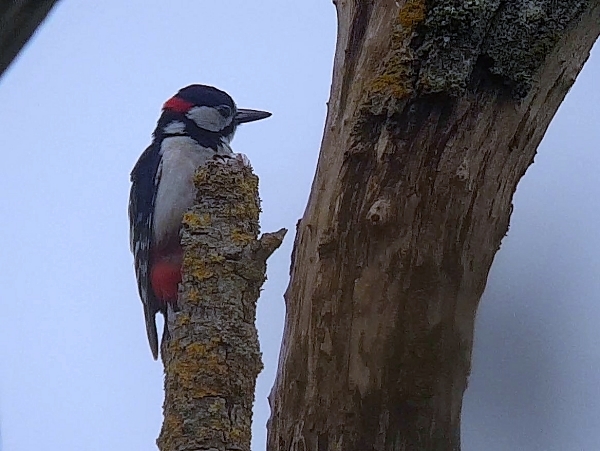 The sky got a little darker around 9am and the wind picked up alittle making it not so comforatble to be out there, so I decided to set off home.

I noticed on twitter that a RED-FOOTED FALCON had been found about 6 miles from my house, I then received a telephone call from Guy Campbell, he was out there looking for the bird. He never found it but mentioned a few other species that I would like to see. So I persuaded Dawn to join me after lunch for a walk near Ilchester.

We arrived at 2pm, the sun was shining and it was quite warm, but a fairly brisk wind was blowing. We parked the car and began the walk along a very straight and narrow track, the hedges on either side were tall and full of birds. I noted Common Whitethroat, Dunnock, Linnet, Goldfinch and to my great delight a pair of REED BUNTINGS. They were first sightings of the year and of course new for my isolation list, they were feeding young and the nest was quite close, so we moved on quickly. 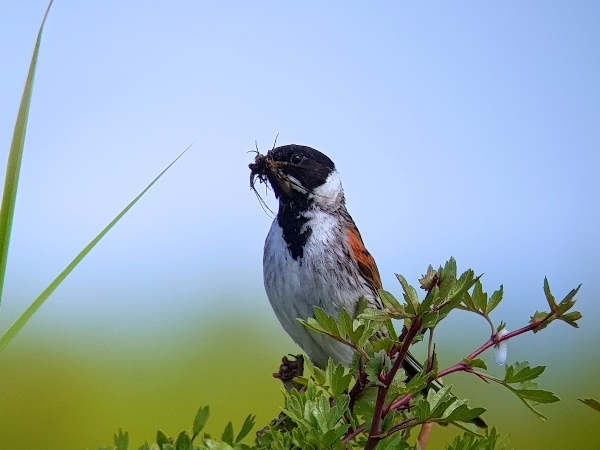 The large flat meadows of both mowing and grazing gave us a a huge expanse of the surrounding countryside to scan. Within a few minutes we found a distant Hobby. We wathced it feeding on the wing fairly high up, then a second bird appeared. I scoped it and found that it was our target bird, a female RED-FOOTED FALCON, amazing what great bird for my lockdown/isolation list.

Soon we were watching 3 birds out there, 2 Hobbies and I Red-foot, none of them came very close and you can imaginge what it was like trying to digi-scope a flying Falcon!! After 15 minutes all three birds disappeared to our left, I think they went to a field that was actually being mowed whilst we were there. 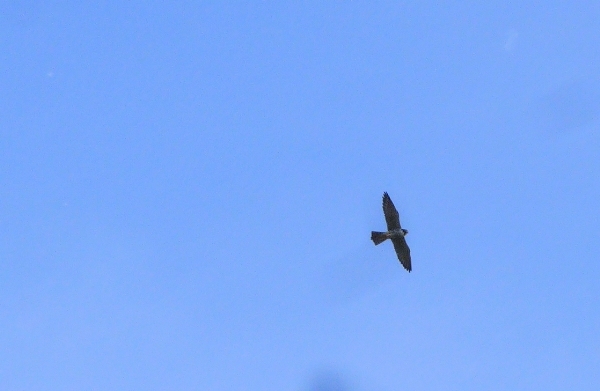 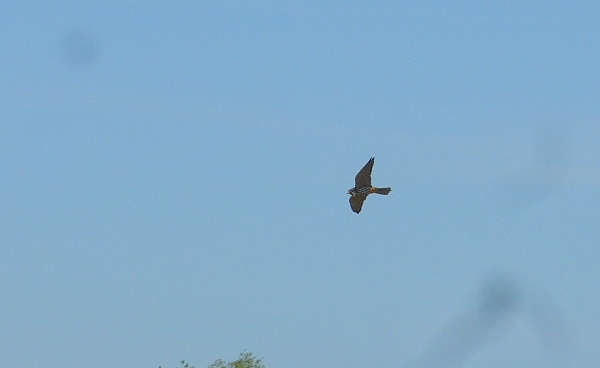 We walked up to a bridge and crossed the River Yeo which looks a lot different from the River Yeo that crosses my patch. Here the river is controlled and manicured, it has high cleared banks, no meanders, no fallen trees, no pebble banks and no character! It looked like canel with one or two rounded bends. Nevertheless the surrounding habitat was excellent, we saw Skylarks, a single Reed Warbler and many Common Whitethroats. I saw a distant Common Kestrel, a couple of Common Buzzards and dozens of Barn Swallows. 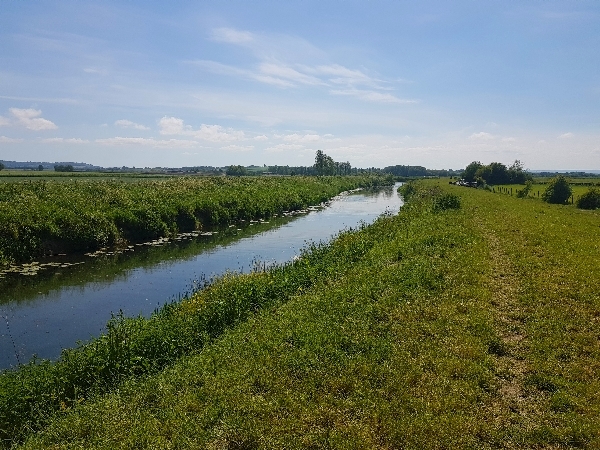 We relocated a Hobby but not the R F Falcon, we also saw Kingfisher, Moorhen, a pair of Gadwall and about 40 Mute Swans. A Little Egret flew over and i forgot to mention a fly-over Common Cuckoo a little while back. 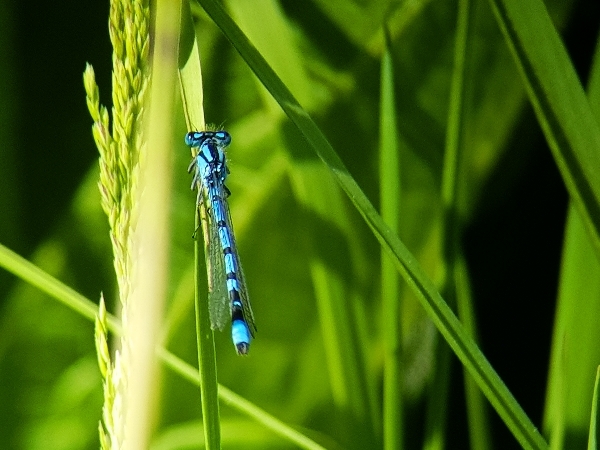 We bumped into two photographers who had seen the Falcon yesterday but wanted better pictures today, but we could not relocate the bird anywhere. A single Hobby was all we saw on the way back. Dawn and I left the area at 5pm.