WEATHER: all day bright sunshine, but a cold easterly wind spoilt it somewhat

I had to go off piste today, I need some sea air and some sea-birds, I had 83 species on my May list and I hoped to see at least 17 new ones today to make a total of 100.

I got up extra early and was in the car at 5:30am I drove directly to Ferrbridge which lies between the 'Isle' of Portland and Weymouth. The ferrybridge has a  large area of tidal mudflats and is the best place to see some wading species, especially when the tide is in any state other than high. 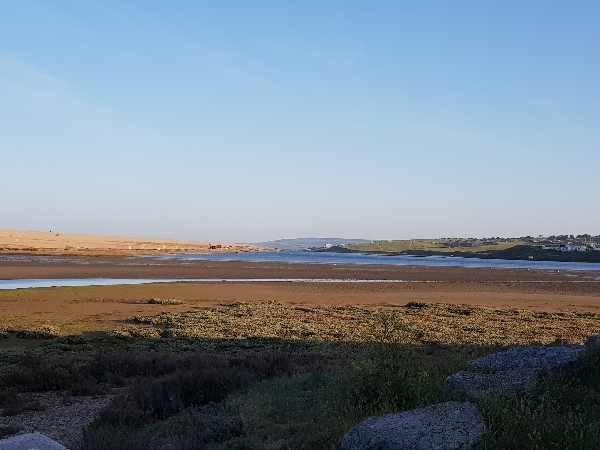 the mudflats at Ferrybridge, very few waders were seen there

I arrived at 6:10am and jump out of the car for a quick scan from the visitor's centre, the tide was low and plenty of mud was exposed. It was quite chilly and I had to shelter behind the buildings from the cold wind. Not many birds were out there, I saw Sanderling, Ruddy Turnstone and Dunlin on the mud and on the shingle bank I noticed about 20 Little Terns. That was 4 new species in the bag, May total 87. 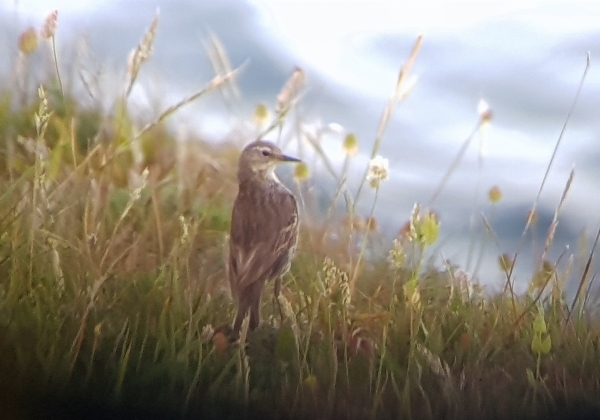 I then drove up onto to Portland and headed for the west cliffs, that is where I hoped to see the most species of sea-birds as they breed on those cliffs.

Walking along the grass footpath I saw lots of Starlings, Goldfinches, a Common Whitethroat and many Herring Gulls. My next new species was a Great Black-backed Gull quickly followed by a Northern Gannet, next up was a Rock Pipit which flew up off the path and landed along way below on the cliff face. May total 90. I also saw a flock of 7 Mute Swans flying along the base of the cliff heading south!! A strange sighting indeed. 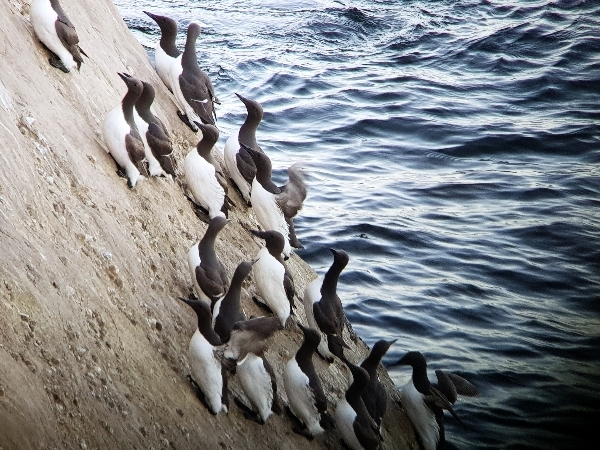 Guillemots clinging to a sloping rock with webbed feet, amazing

I continued along the west cliff heading south towards Portland Bill Lighthouse, suddenly I had a rush of new species, they came thick and fast. Fulmar and Kittiwake were flying around I couldn't find one perched at all. Then dozens, if not hundreds of Guillemots were joined by Razorbills in the water about 200ft below me. May total 94. 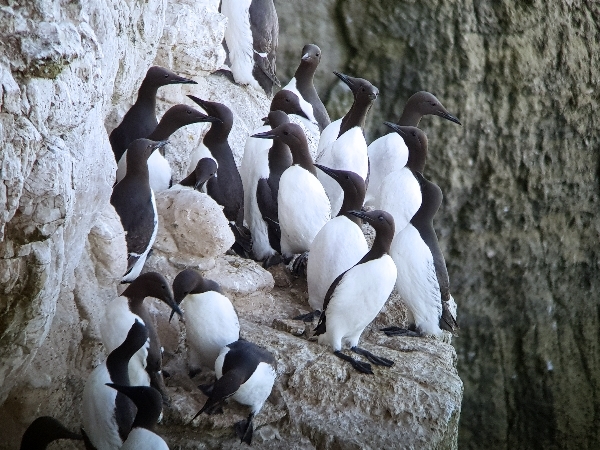 more Guillemots on their nesting ledges 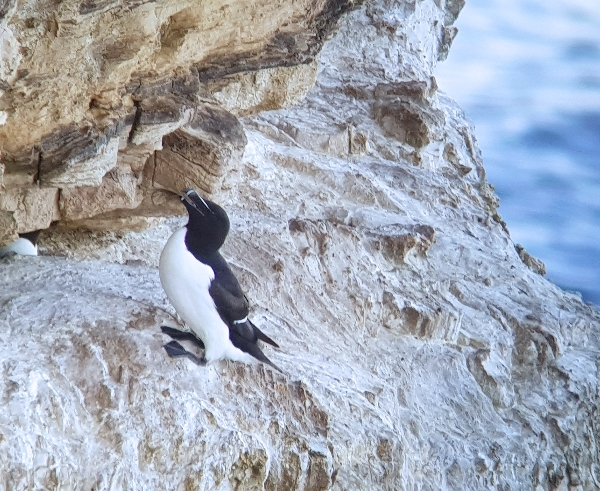 I spent quite a long time searching for a Puffin, they do breed there but in very small numbers, perhaps 2 or 3 pairs, it was like looking for a needle in a haystack. I did find a European Shag sitting on a cliff ledge and I saw several Meadow Pipits in the grass and scrub behind me, that was two new species, May total 96.

three Razorbills with a single Guillemot

Walking down to the Lighthouse I saw Raven, Skylark, Linnet, Goldfinch and Dunnocks but nothing new. At the Bill (the point of the 'island' that sticks out furthest into the English Channel) I set the scope up for a sea-watch. It really was quite windy and uncomfortable, I never saw anything new. 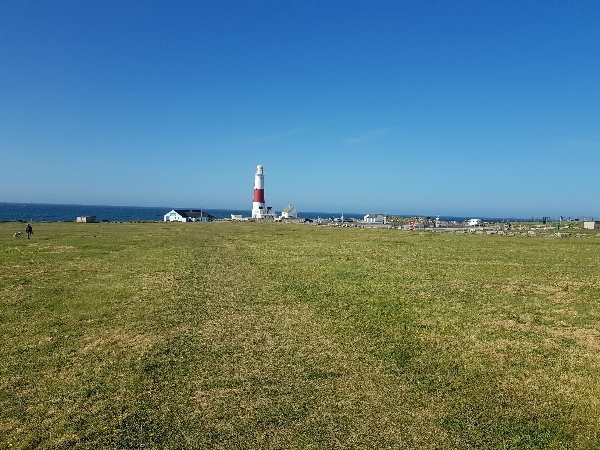 Lots of gulls were feeding out in the channel and a continuous flow of 'auks' flew back and forth in front of me. I saw Great Cormorant and then 2 new species as I started to walk away. The first was a couple of Sandwich Terns and the second was an Oystercatcher, numbers 97 & 98 on the list. 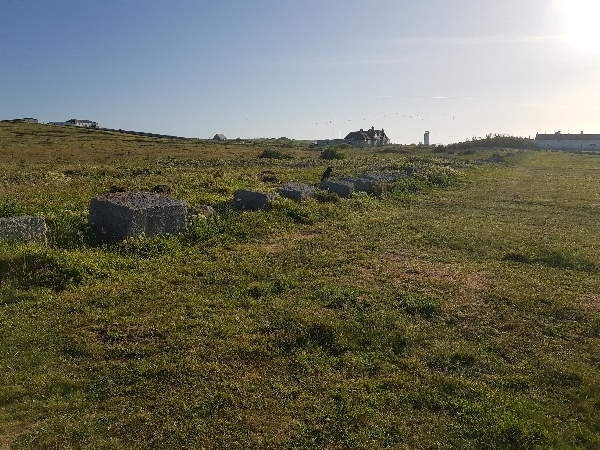 you can just about see the Raven on one of the rocks shown above and below this is the same bird at the same distance through the scope - aaaahh! the magic of optics 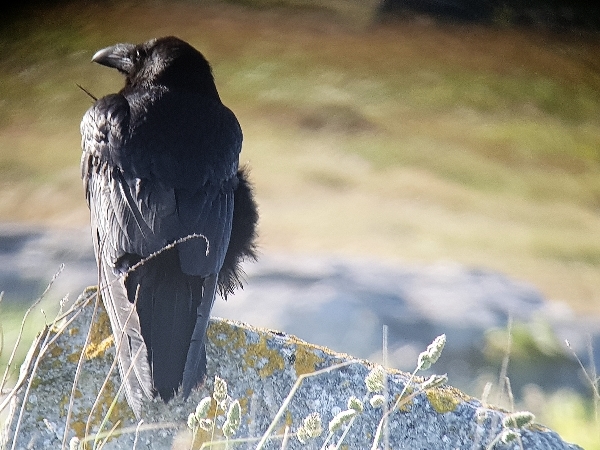 I had walked 2 miles from the car to get to the 'Bill' and it was mostly downhill, now I had to walk back up a slope with a biting wind hitting me in the face. I stopped to watch a few birds along the way, I never saw the expected Peregrine Falcon but I did see Common Kestrel. 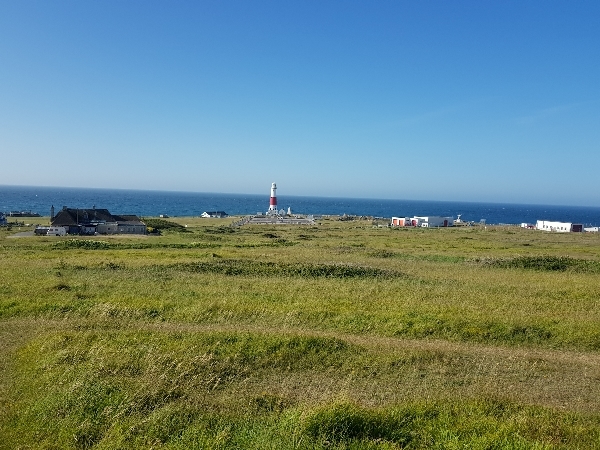 From Portland I drove back down to Weymouth but first I made a second stop at Ferrybridge in the hope of seeing another wader or two. there were more Sanderling and Dunlin that earlier on and I found half a dozen Greater Ringed Plovers, number 99 on the list. 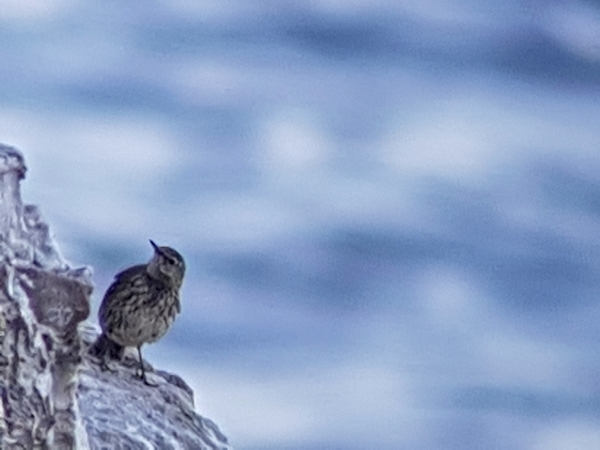 I drove across Weymouth to RSPB Lodmoor where I knew I would complete my list. I parked at the seaward entrance and walked 100 meters onto the main track. From an opening in the hedge I could see the small islands constructed for terns to breed on. Sure enougth there were a dozen or so Common Terns, sitting on eggs and many pairs of Black-headed Gulls with at least two pairs of Mediterranean Gulls, I had done it, my 100 was up and in excess. I added 3 new species giving me 102. 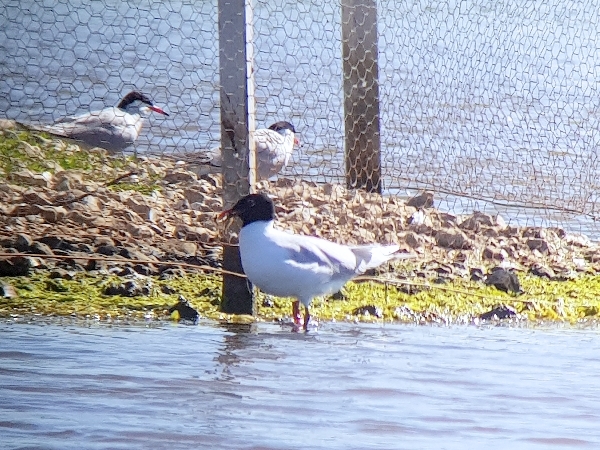 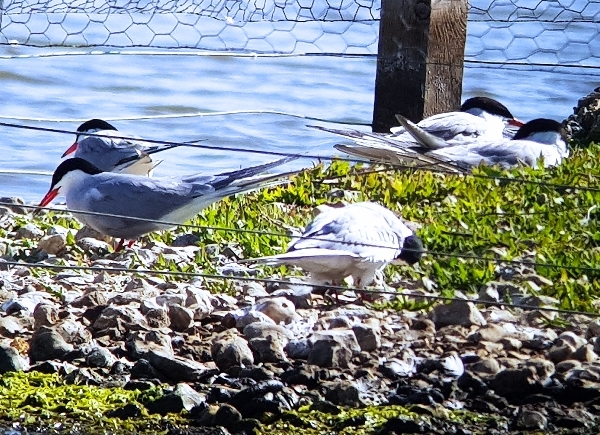 some Common Terns on 'tern Island'

Just before I left a Cetti's Warbler called loudly from the hedge, so I waited a while and yes he came out to move to another bush right next to me, a bonus bird and number 103 on the list for May.

My journey back was a little slower as now there was a lot of traffic to negotiate, I arrived home at 10am, a good job done and my hundred species list smashed!! Twenty new species seen today. 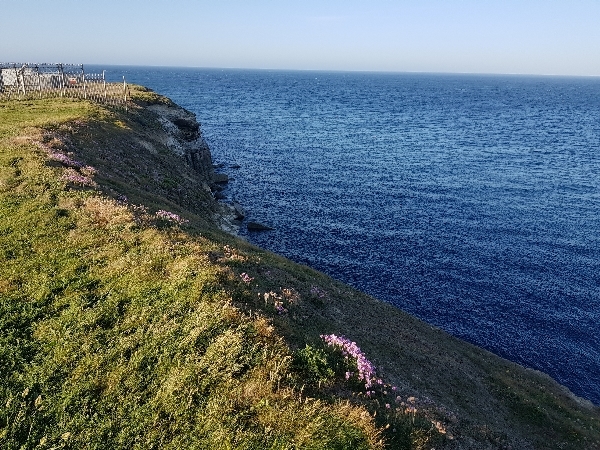 the west cliffs at Portland with Sea Pink flowers

In the afternoon Dawn and I sat out in the lovely sunshine in the garden, a message came through that a Red-breasted Flycatcher had been seen at Potland Bill Bird Observatory, doh!! I walked right past there but as it is closed I doubt if they would have let me in anyway.