TWO MORE WALKS ALONG THE SAME ROUTE THROUGH THE MEADOWS OF YEO VALLEY AT STOFORD.

WEATHER:  yet another beautiful sunny morning, still quite chilly. 8C

I cut the walk short this morning and missed out the climb up the hill on the return journey because my chest was a little tight today due to the cold air. Nevertheless I had a great two hours watching a nice variety of species. 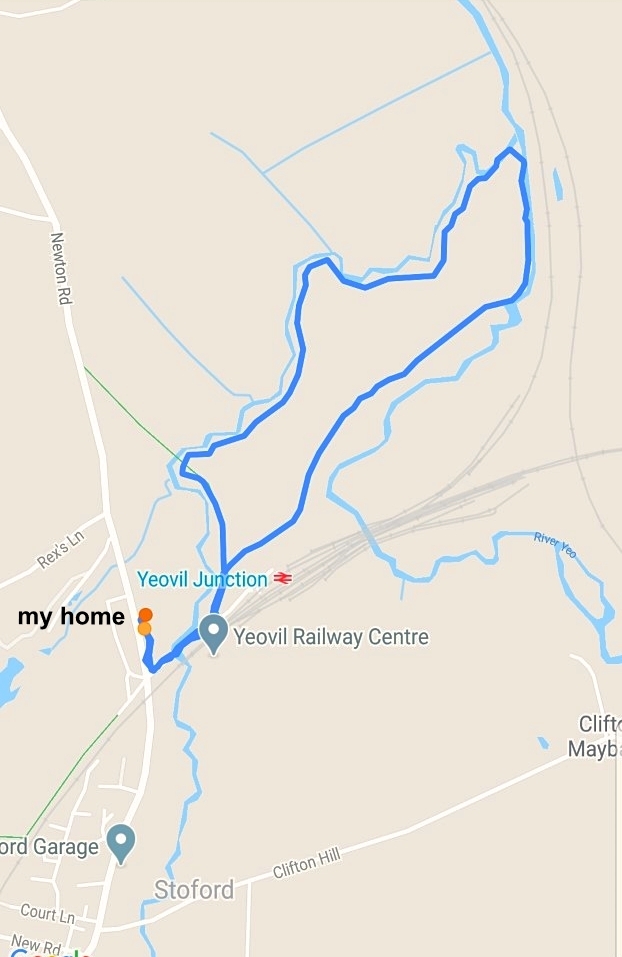 my route marked in dark blue - I follow the stream into Yeo Valley until it meets the River Yeo, my route back takes my up a grass covered hill from where I have super views of the surrounding countryside.

The Green Woodpecker/Eurasian Nuthatch saga continues, I heard both species near the hole but didn't actually see them. The hole looked exactly the same except that the mud put in by the Nuthatches looked as though it had been pecked at by the Woodpecker, so no end result yet!!

The pair of Mandarin Ducks are still on the river although they always see me first and fly off before I can get my scope on them. Two pairs of Mallard are also holding territories along the same stretch of river.  The male Grey Wagtail was again on top of the delerict building he looked great in the morning light. 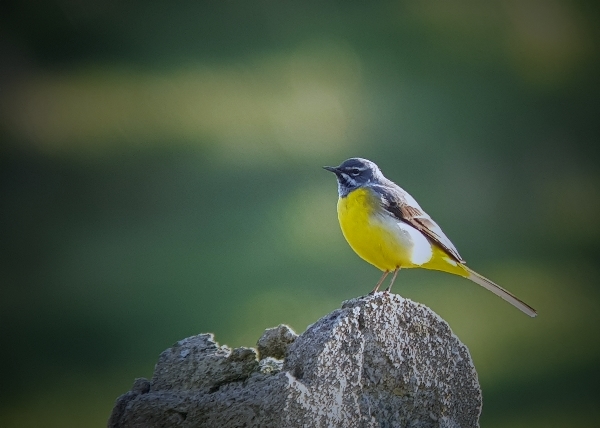 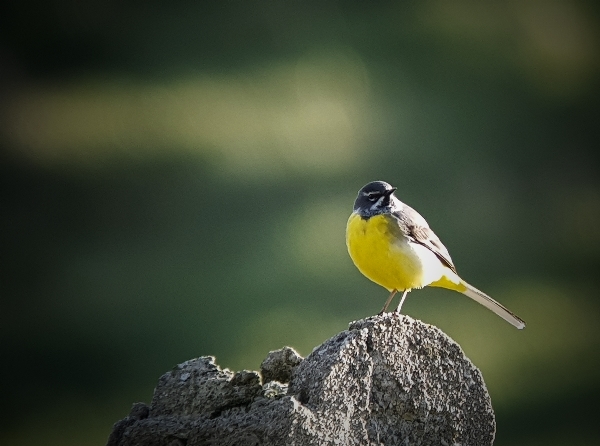 I made a list of species singing along the route:   7 Robins, 4 Wrens, 1 Chaffinch,  1 Grey Wagtail, 2 Chiffchaffs, 4 drumming Great Spotted Woodpeckers and 2 male Green Woodpeckers. I never counted the number of Blue and great Tits singing and I did see 1 pair of Long-tailed Tits. There is also a second pair of Common Buzzards at the end of the valley, so we have two pairs along a 1 1/2 mile stretch of the river. 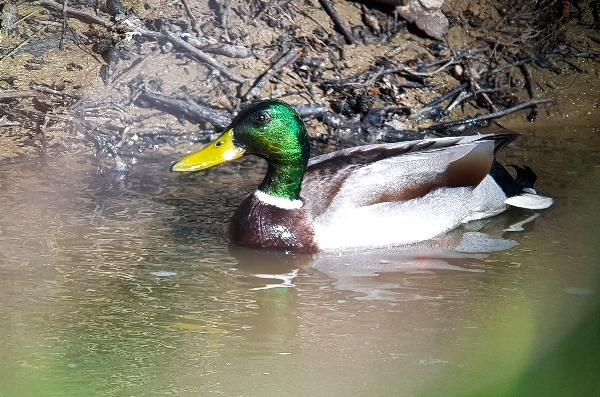 I know its only a Mallard, but when you seen a genuine wild one on its territory in a quiet stream then its just as good as any other species.

Yesterday I mentioned that the Raven was notable in its absence, today I saw two very voiciferous specimens, they were chasing one of the Buzzards around giving some grief to the poor fellow.

Another new species for the 'Isolation' list was Blackcap, I saw a male near the Chiffchaff site. Later, when was back home, a Goldcrest flew into the garden and spent a little time exploring our old bench, I am sure it was looking for spider eggs etc.

As I crossed the bridge over the river on my way to the my usual walk I noticed that the water level had dropped significantly over the last few days. Without rain the level is so low that many of the river-bed rocks are now exposed and that is where I saw the female Grey Wagtail feeding this morning. I know where they have found food for the last few months because I have often seen them in the garden and the water meadow.

More intrigue at the Green Woodpecker hole!!  Today the Woodpecker called from a little further off and I never heard or saw a Nuthatch. However, a new layer of mud has been placed along the bottom rim of the hole, I couldn't believe it, it looks as though the Woodpecker has deserted and the Nuthatches are moving in!! Incredible!! 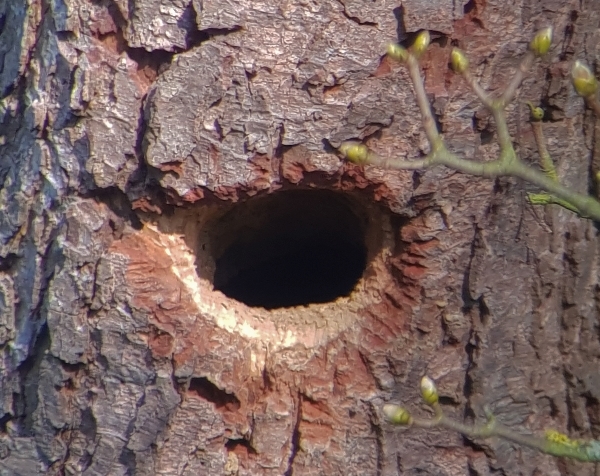 Fewer species seemed to be singing today, I nearly got a picture of the Mandarin Ducks but just before the camera clicked they flew off! I never heard a Chiffchaff but a Blackcap sang for a while and I added Goldcrest to the 'birds in song' list too.

The Ravens were still chasing Buzzards and a few Jackdaws joined in and I watched a pair of male Great Spotted Woodpeckers have a little altercation. It was obvious that trouble was brewing, boith of them were drumming, one of them moved to within 3 trees of the other one but the interloper was chased off. Now I think that there are four Great Spotted Woodpeckers hoilding teritories in the 1 1/2 mile stretch. 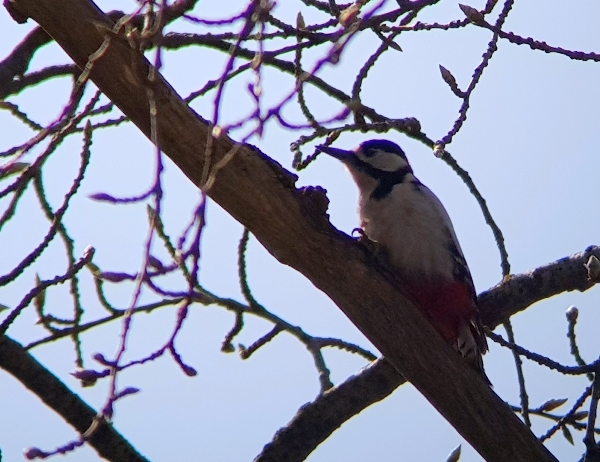 Another observation was the large number of Blackbirds eating the berries of the ivy, it just shows how important this plant is to our aviforna, so don't cut it down if you have some growing in your garden.

Other species of note: a single Red-legged Partriodge was seen in flight, a pair of Long-tailed Tits were nest building (I saw one of them carrying a feather), Common Pheasants called several times and as I sat in my garden after the walk I heard a Greenfinch wheezing, a sound I hadn't heard for a long time in the vicinity of my garden.

At 3pm I decided to do a challenge put to me by Tom Green who lives in Norfolk, he suggested I sat in my garden and produced a 1-hour Isolation List to compare with his. So here is my 3-4pm garden list:

BIRDS HEARD BUT NOT SEEN:

BIRDS SEEN IN THE GARDEN and MEADOW:

I think I would do better with a morning watch rather than late afternoon.

This is the view I have from my garden, I can't see behind me because of the building and to the left I have tall laurels and very high sycamores.

The view straight ahead