MORNING WALK INTO YEO VALLEY AND A VISIT TO SUTTON BINGHAM

A new month begins and a new list is started, I am optimistic that August is going to turn up some real goodies and that my August list will surpass the 115 species seen in July. August is a month of change, birds change their plumage, their behaviour and their living space, many migrate, so I am sure that I will see a lot of migrants pass through my local patch.

I began my August adventure with a walk into Yeo Valley, I started listing from my garden with a couple of Magpies in the meadow and a few Jackdaws on the chimneys of the houses nearby. I also saw House Sparrow, I heard a Carrion Crow and a distant Green Woodpecker. Once on the track into the Valley I saw Wood Pigeons, a great Spotted Woodpecker and a my first Blue Tit. 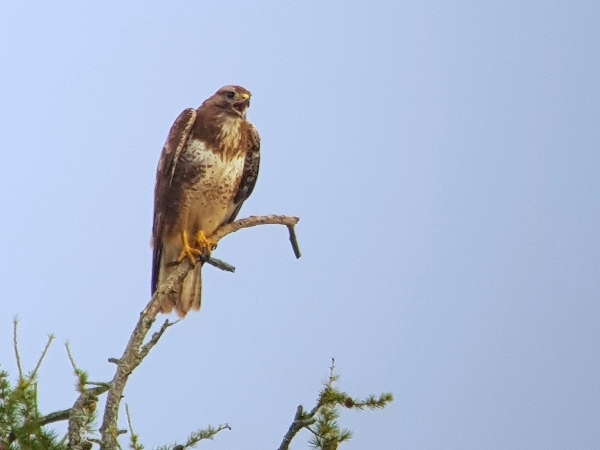 one of the locasl juvenile Common Buzzard still calling for momma

I walked along the banks of the stream all the way down the valley to the River Yeo, along the way I stopped several times to watch one or two species, a juvenile Common Buzzard sat out on a familiar perch, it called all the time I was there, a Chaffinch appeared above me but my search for a Kingfisher along the stream went unrewarded.

Overhead I saw a flock of 13 Mallards flying in a ‘V’ formation, a couple of Herring Gulls circled on the rapidly forming thermals and Barn Swallows danced over the wheat fields chasing insects. I flushed two Red-legged Partridges as I walked towards the second meadow and almost immediately afterwards I flushed two Common Pheasants. 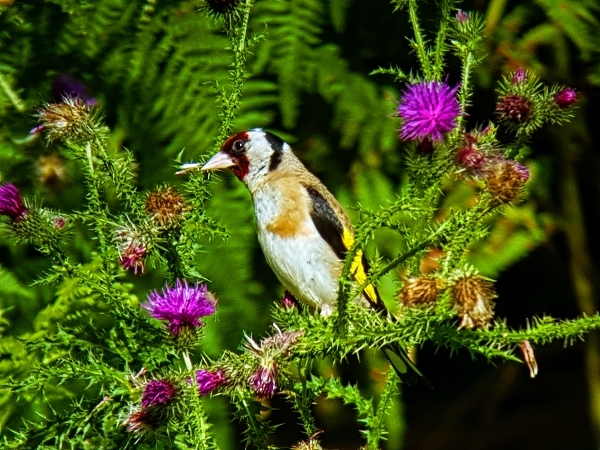 At Rook’s Hill things really started to get moving, a small area of oak saplings, bramble and bracken was alive with warblers. I couldn’t count them because of their constant movements. I saw half a dozen Common Chiffchaff and probably the same number of Willows Warblers, one or two of the Willow Warblers were bright green/yellow juveniles. A few Blackcaps were feeding there too and some Goldfinches dropped down to feed on Thistle seeds. 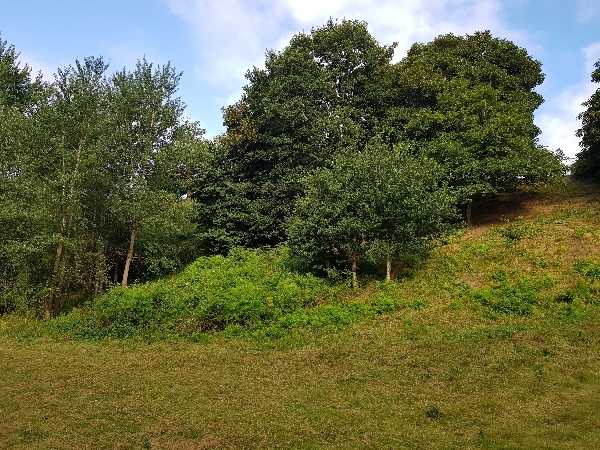 the clump of oaks, bramble and bracken where all the 'warbler' activity was taking place

A trio of Mistle Thrushes flew over and landed in a dead tree on the top of Rook’s Hill, the top of the tree was covered in huge swarm of flying insects which the thrushes tried to catch.

A pair of Bullfinches appeared along a hedge of hawthorn and I heard two Wrens singing, I also found one juvenile Moorhens on the river and a flock of 16 Goldfinches landed in the dead tree on the far bank of the river. From a position half-way up the slope of Rook’s Hill I searched the dead tree for more species, two more Great Spotted Woodpeckers appeared, the pair of Bullfinches reappeared and a Chiffchaff joined them. Another Green Woodpecker called and showed briefly. I also heard Long-tailed Tits calling but did not see one. 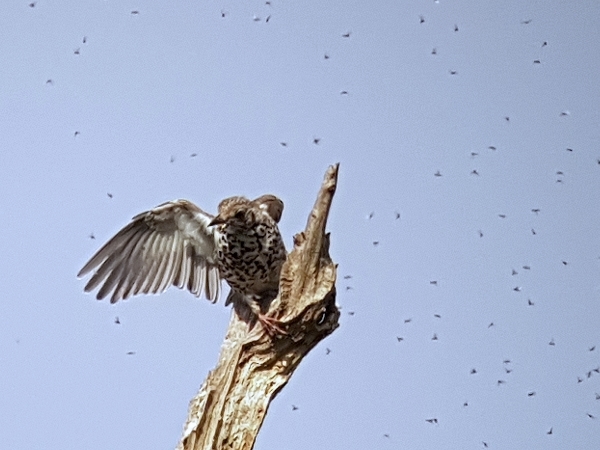 one of three Mistkle Thrushes seen this morning, surrounded by flying insects

From the top of Rook’s Hill I watch three Stock Doves land on another dead tree but I could not get near enough to photograph them, a Raven called in the distance but did not appear.

I had spent a very enjoyable 2 ½ hrs walking my local patch, the cloud cover increased and the wind picked up somewhat, so I called it a day and walked back home. One last tick for the August list was a Grey Wagtail seen from the road bridge over the stream. 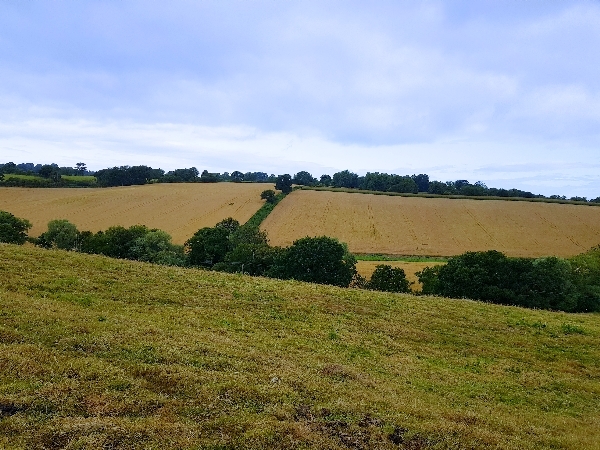 the wheat fields as seen from the top of Rook's Hill

Before I returned to the flat I jumped into the car and drove across to Sutton Bingham Reservoir to see if any new waders had arrived. I drove straight to the southern end without stopping at the causeway. Above one of the entrance gates I saw a dumpy shape perched on the power lines and as I drew nearer I could see that it was a LITTLE OWL!!! That was a mega species for me, the first for the pandemic period, the first for a long time at Sutton Bingham and the first for this year in the UK. Amazing, what a great start to August. 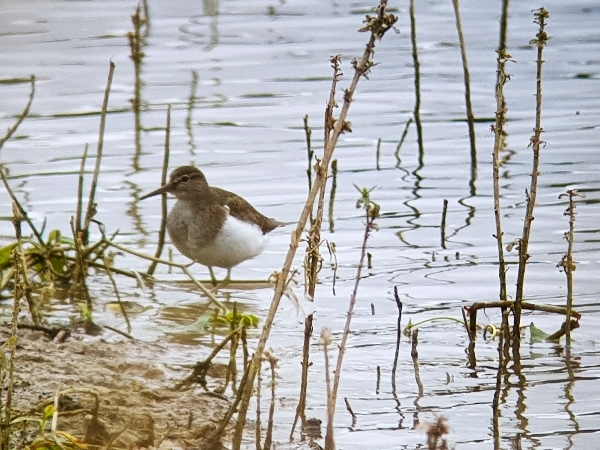 My first objective once through the gate at the southern arm of the reservoir was to walk back to where I had seen the Owl, it would have been great to get a picture. But alas, the owl flew into the mature oaks around the gate and I couldn’t find it again. I did see a party of mixed species in the hedgerow, Blue Tits with a couple of Coal Tits was nice to see. I also saw a few more warblers in salix bushes, but I could find Chiffchaffs.

From the viewing place at the southern arm of the reservoir I scoped the muddy area, more mud is now exposed and less water can be seen in the small pool. However, there was more bird activity there than usual! I saw 6 Green Sandpipers and 6 Common Sandpipers, I also saw 6 Great Cormorants, 5 Grey Herons, two Mandarin Ducks and two Little Egrets. The mallard with ten tiny chicks was still around and 29 Great crested Grebes had gathered nearby (1 chick made that 30 birds).

Two Ravens sat on a pylon on the other side of the water, they called as they flew off. I then met a Yeovil birder from my distant past, Steve chorley, it was great to catch up. Ivan the Reservoir manager also joined us for a while.

Later I made my way back home, making a short stop at the causeway to scope the gulls, nothing new and exciting appeared, I listed the usual Great BB, Lesser BB, Herring  and Black-headed Gulls and a few Moorhens.

After a cup of coffee back home I completed my exercise walk through the village and added Common Swift, House Martin and Collared Dove to my August list. It nice to see the Swifts as very soon they will gone, heading off back to Africa until next May.  Forty two species went onto the August list today.