MORNING WALK INTO YEO VALLEY & A VISIT TO LANKHAM BOTTOM

It was day of mixed fortunes, my local patch didn’t really turn up much although I dreamed of a ‘flycatcher’ fall (after yesterday’s easterly wind a large countrywide ‘fall’ of migrants included many Spotted & Pied Flycatchers ocurred), unfortunately, none of them turned up on my patch. The thick mist cleared a little and by 7am I could see 50 meters or so, I went out then. 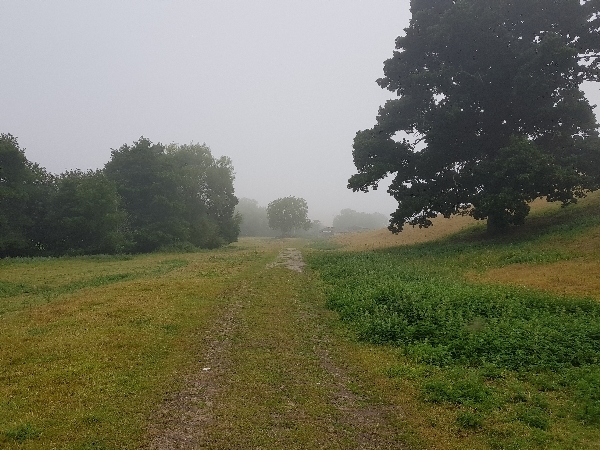 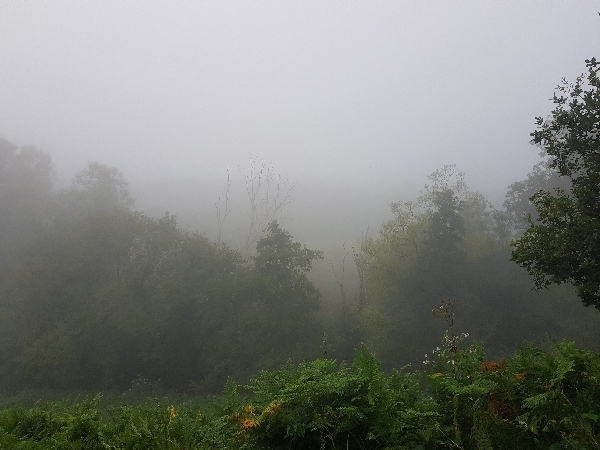 In the valley the visibility was poor so I never expected to stay long or to see much, I was right on both counts. I watched a trio of Mistle Thrushes in the mist just after I had inadvertently flushed two female type Mandarin ducks from the stream. A Robin sang for a while and in the hawthorn hedge I saw a second Robin, a Wren and the three Mistle Thrushes. The thrushes were determined to get into my camera so I duly obliged. 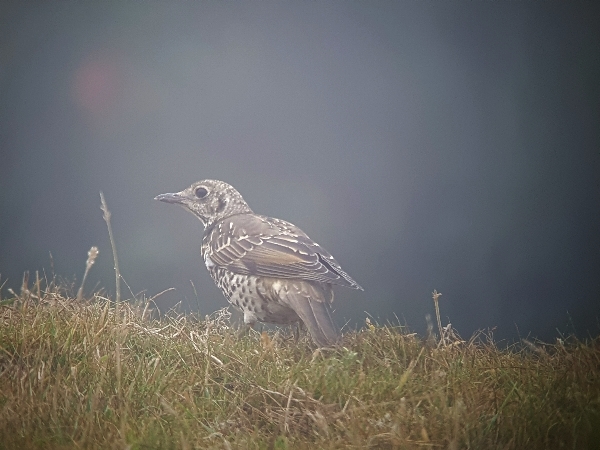 In the River Yeo Valley on the eastern side of Rook’s Hill I flushed a Grey Heron from the river bank and watched Chiffchaff, Blue Tit, Goldfinch, Great Spotted Woodpecker and both Common Buzzard and Green Woodpecker called too. 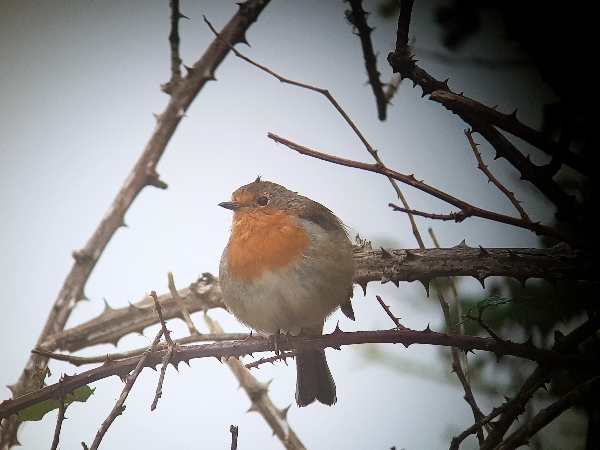 I climbed up and over the top of Rook’s Hill and walked round to our car in the communal car park, it was still very misty but from past experience I guessed that just 9 miles along the Dorchester Road at the top of Warden Hill there would be clear blue sky and bright sunshine! Sure enough, 15 minutes later I was walking along a steep west facing escarpment at a place called Lankham’s Bottom. 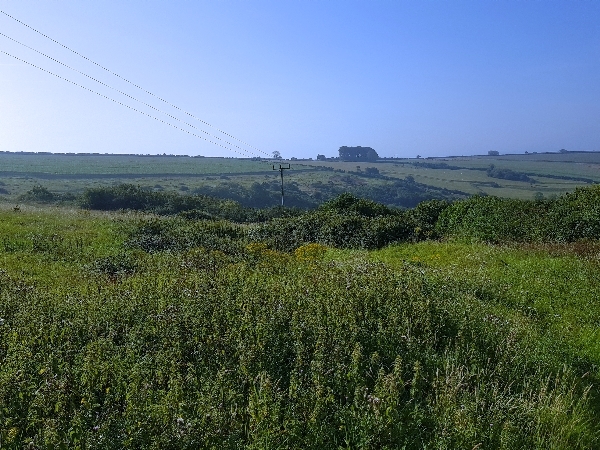 It was like stepping from an jet liner into a foreign country like Spain or Greece in the height of summer, the heat hit me as I got out of the car and the brightness made me squint, how lovely!. The little reserve I was walking on is managed for the conservation of butterflies but the scrub holds many birds too. I quickly listed Yellowhammer, Linnet, Common Whitethroat, Common Kestrel and Common Buzzards. 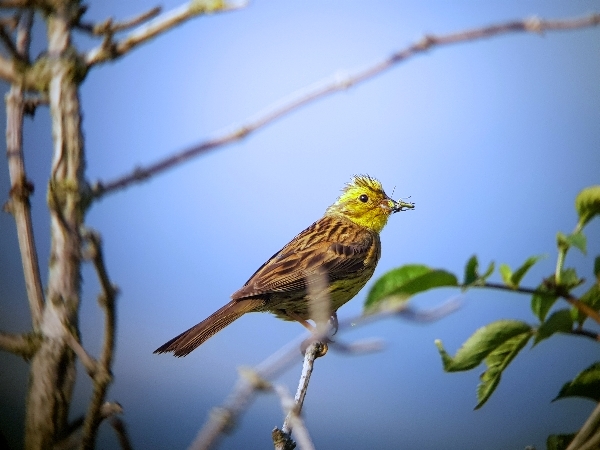 Dozens of butterflies were on the wing too, Meadow Browns, Small Heath, Gatekeepers, Common Blue, Brown Argus and Large Whites were all seen pretty soon after I began my walk.  I remember seeing some good birds at the far end of the reserve during my last visit, so that is where I headed. Along the way I bumped into a PAINTED LADY (the butterfly, not a lady of the night) and she obliged by posing for some pictures, how nice was that, my first one of the year. (I remember a week or so ago that Richard and Linda claimed a sighting when we visited Ham Wall, I missed it and so dismissed it! Ha!). 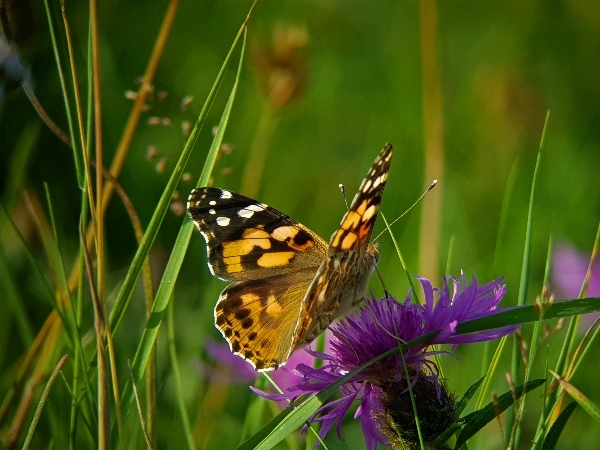 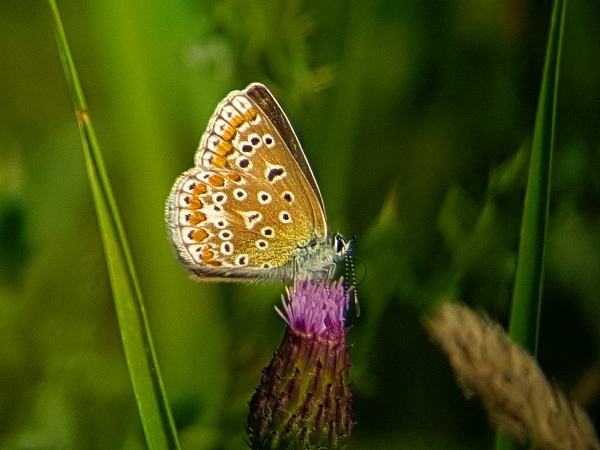 At the far end of the reserve I found Common Stonechat, a group of 8 Red-legged Partridges, a group of warblers included 4 Willow Warblers and a couple of Chiffchaffs and 4 Common Whitethroats. I then spotted a Pipit in the top of a hawthorn bush, it had to be a Tree Pipit and sure enough it was, click, click, my first Tree Pipit since a visit to Wareham Forest in May. 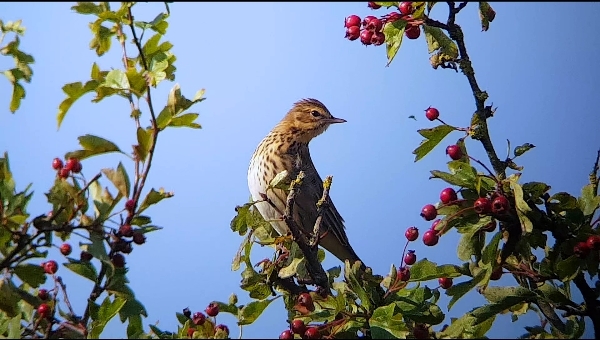 I then glanced down into the scrub below me a saw the distinctive shape of a flycatcher, on scoping the bird I realised I had found a Spotted Flycatcher and not a Pied. Oh well, better luck next time. I phone-scoped the flycatcher then a juvenile Bullfinch flew into the same bush. Several Yellowhammers were flitting about and from my pictures I realised that at least one pair was still feeding young as they were carrying food for them. 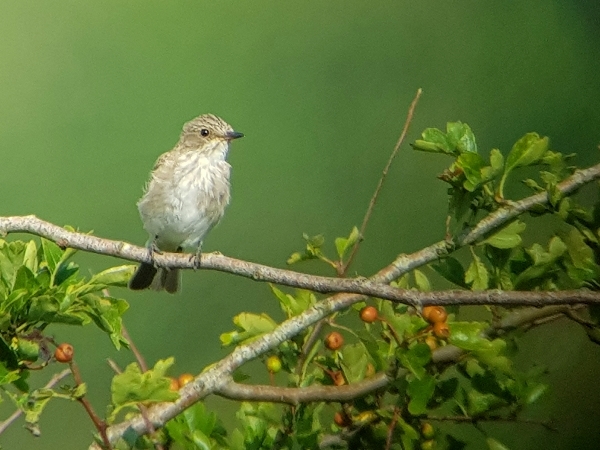 I had more butterflies on my way back to the car and finally I got to photograph a CLOUDED YELLOW (which incidentally I forgot to mention in yesterday’s blog – we had at least 4 sightings of Clouded Yellows at Fontmell Down). I searched for Chalk-hill Blue as I could see patches of  Horseshoe Vetch (Hippocrepis comosa) the host plant of this species, but alas I never saw one. 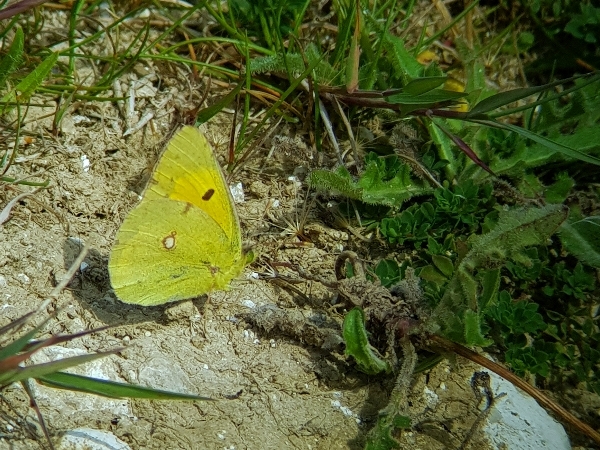 It started to get very warm as I made my way back to the car, I was glad of the A/C, it had been a great little outing, very enjoyable.  The rest of the day was spent at home with Dawn, we spent a lot of time reading in the garden, I may have dozed off, can’t remember! 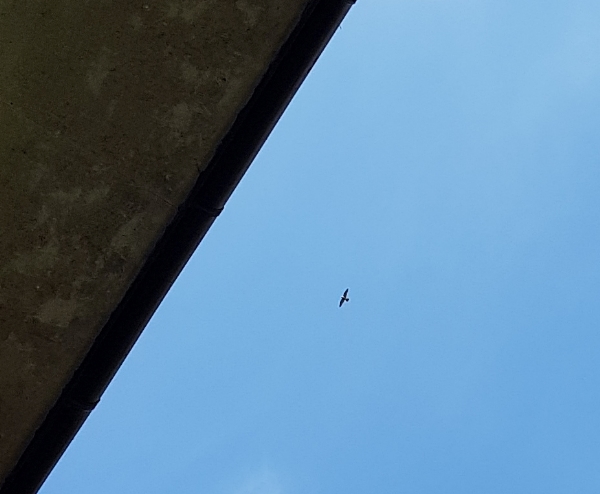 if you look carefully you might see the Peregrine Falcon

Later I had a Peregrine Falcon circling right above the garden, best sighting yet for me in Stoford. After dinner we sat out again and I saw a Hobby over Rook’s Hill and I said to Dawn all we need now is a Red Kite to come over, guess what?  A few minutes later I got onto a Red Kite flying very high up, it circled over Rook’s hill before disappearing to the west. I also spotted a single Swift, this was the first for a week in Stoford as the local bunch have left their nest sites in the village. It was a great end to a great day in sunny UK.