What a super morning, those miserable, rainy and cloudy days are soon forgotten when you wake up to a morning like this, it was fabulous out there. You really appreciate the good days after a series of bad ones, what a terrific start to September! 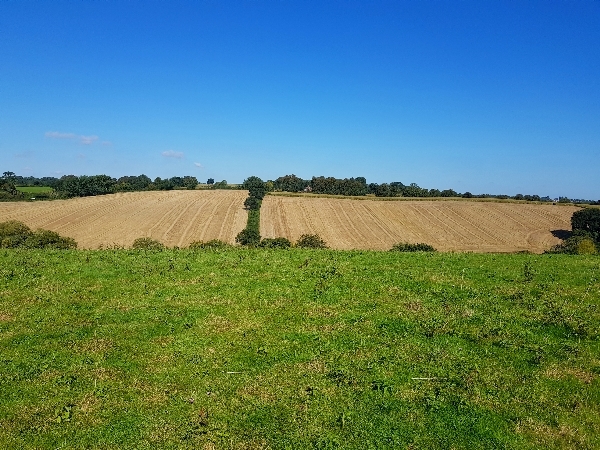 I left the flat at 7:30am it was perfectly still with a clear blue sky, just dandy for birding in the Valley. I saw both Blue and Great Tits at my feeders and the usual Jackdaws on the roof of the houses opposite our flat. A robin sang in the car park (the first of three that I heard this morning). As I walked round to the valley track along the lane I found a moribund Blackbird lying in the road, an obvious casualty, I nursed it my hand for 5 minutes but unfortunately it passed away, I still ticked it, it was the first Blackbird for the month!! 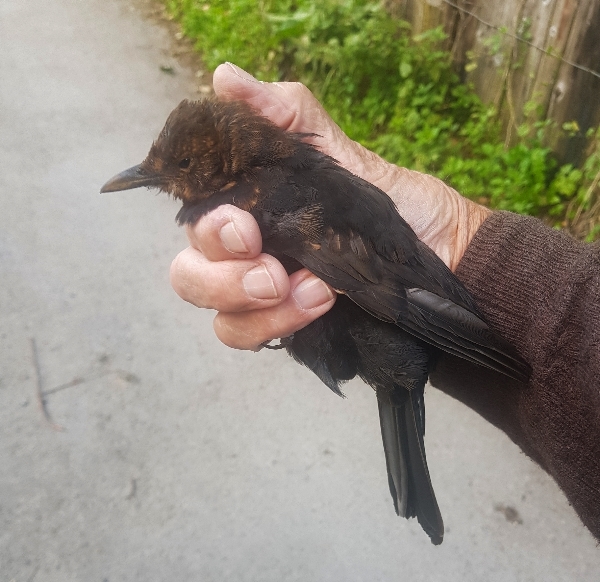 As yesterday I turned south and walked upstream instead of turning into the valley, I found a Wren in partial song and more Blue Tits as I walked through the wooded area. Once I had broken out into the hay meadow I looked back and watched the hedgerow and trees in front of me. They were in bright sunshine and were perfectly still, soon a mixed flocked came through the trees. I saw a dozen Long-tailed Tits with one or two Chiffchaffs and plenty of Blue & Great Tits. 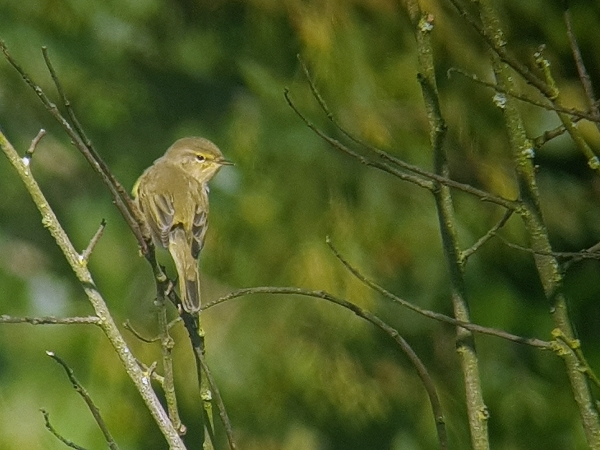 Common Chiffchaff - this bird was still feeding its fledged young!

Walking back northward in the meadow I continued to scan the hedges, I saw more Chiffchaffs, I am sure that they were local breeders and not passing migrants because the young were begging for food from the adults. I added Goldcrest, Dunnock, Magpie, Rook, Herring Gull, Carrion Crow, Common Starling and Goldfinch to the list before I entered the track into Yeo Valley.

A Common Kestrel has been hanging around in the valley these past few days and he was there once again today, its amazing really, I had not seen one all year here until recently. Both Pheasant and Red-legged Partridges were in the recently cropped wheat fields and I could hear a Common Buzzard but I never saw it. 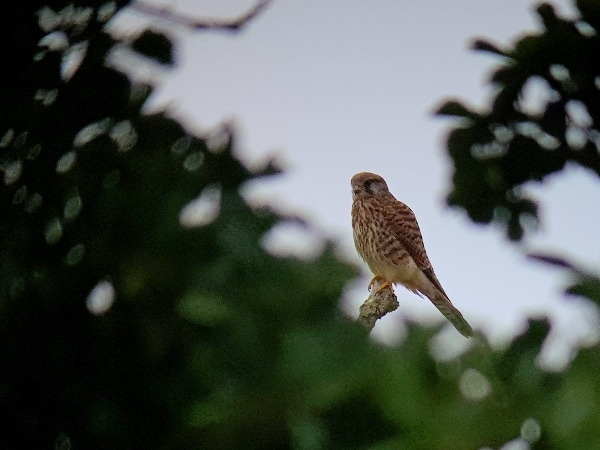 Up to now I had only heard Green Woodpecker calling and Great Spotted Woodpecker drumming, but now I saw the Green Woodpecker in flight and a dozen House Martins and I counted fifteen Barn Swallows flying south. At the stream I crept up to the bank and saw the Kingfisher, I gently slipped my scope off my back, set it up and reached for my phone……oops! Off he went. 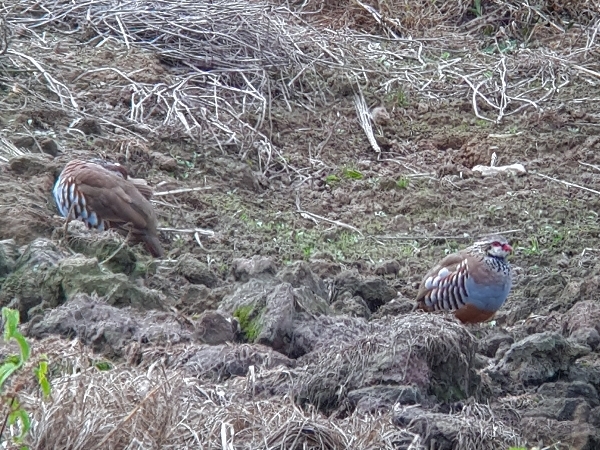 I walked up and over Rook’s Hill seeing the Green Woodpecker again and hearing a Raven cronking, I never saw the Raven and I never added any species to the list at the River Yeo. 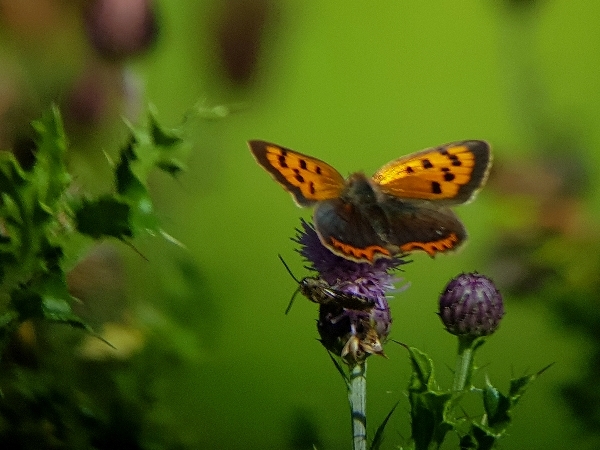 Dawn and I had planned to go out around 11am so I made sure I was heading home before 10:30am, I stopped to watch a few butterflies at the exit gate to the valley, Meadow Brown, Small White, Large White, Red Admiral and Small Copper were on the wing, I also saw a Common Darter Dragonfly sitting on the gate.

Just after 11am Dawn and I drove to Lambert’s Castle for a walk and a picnic in the sunshine. It took nearly an hour to get because of road-works and slow moving vehicles! The sun had disappeared behind a bunch of clouds and a chilly breeze swept across the open meadows. We donned our fleeces as we sat on a bench to eat our lunch, burrrrr... it was quite chilly. 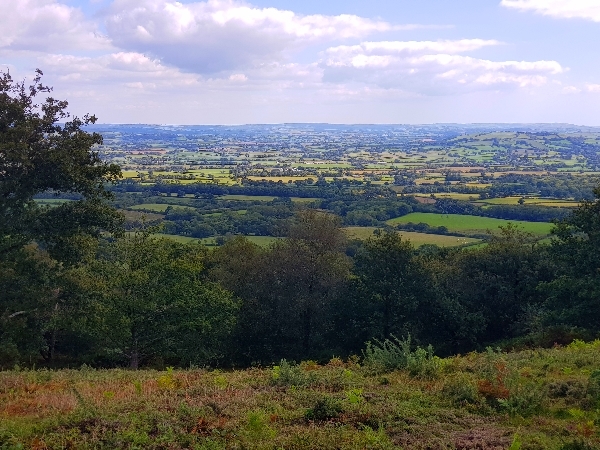 Soon the sunshine returned and we were happy walking along the escarpment looking at the stunning views, we saw a couple of Northern Wheatears at this point. Our walk took us into the compound of the ‘Castle’, which is essentially a cleared area with a ditch around three sides of it, an iron-age settlement. 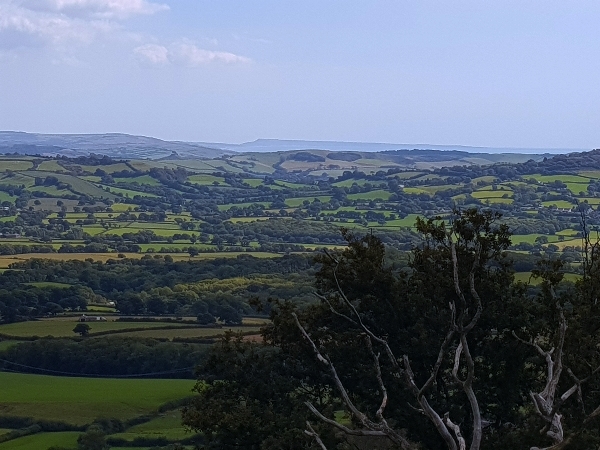 another view - the ridge in the distance is actually Portland

Three large compounds of the castle have many crab-apple trees and they border a huge oak and beech woodland, we walked as far you could go through the compounds.  A Sparrowhawk circled over us and Bullfinches called from the orchard. We stopped to watch a Nuthatch and then a few more birds appeared. A couple of Spotted Flycatchers flitted out and back into the trees as they do, a pair of Coal Tits worked their way across a pine tree.

I then got onto a very small bird and soon it showed its head, it was a FIRECREST, whoopee!! My first for the year (I think), a great sighting all the same and now I've seen both 'crests' in one day. We went on to see four more Spotted Flycatchers, a group of six Bullfinches, a couple of Chaffinches and a Flock of Goldfinches.

It wasn’t until we were nearly home that we saw our first Common Buzzard of the day!! That is 35 species on the September list, a great start because of the Firecrest, I am hoping to exceed 130 species this month,  12 more than August’s total of 118, watch this space.