Today I collected Lorna and Mike from their hotel in Dorchester at 8am. Mike and \lorna are staying in Dorset from 3 night before travelling to Somerset for another two nights where I saw meet up with them again.

The journey to the first venue in Wareham Forest took about 20 minutes from Dorchester, we stopped at the northern end of the forest where I had seen a flock of Crossbills during a recent visit. We walked through mature pine trees and some hazel/oak woodland where we noted a few common garden species such as Wren, Blackbird, Song Thrush (my first for September), Chaffinch and Robin. 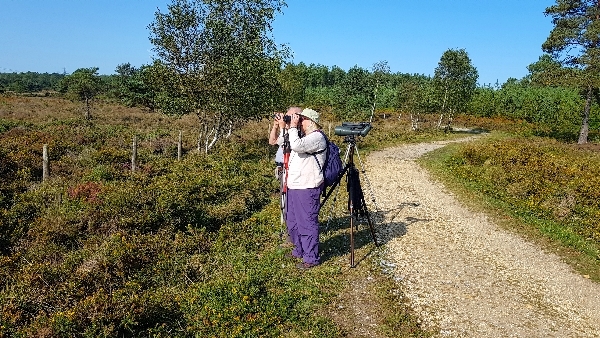 Lorna and Mike on the heath at Wareham Forest

Once we were in the pine area we heard birds calling from the canopy, we found Coal Tits and a flock of Siskins, but there was no sign of any Crossbills. We tried our luck in a more open area across the road from the car park, there we found a mixed flock of Blue, Great and Coal Tits as well as Chiffchaff and Goldcrest, with still no sign of any Crossbills. 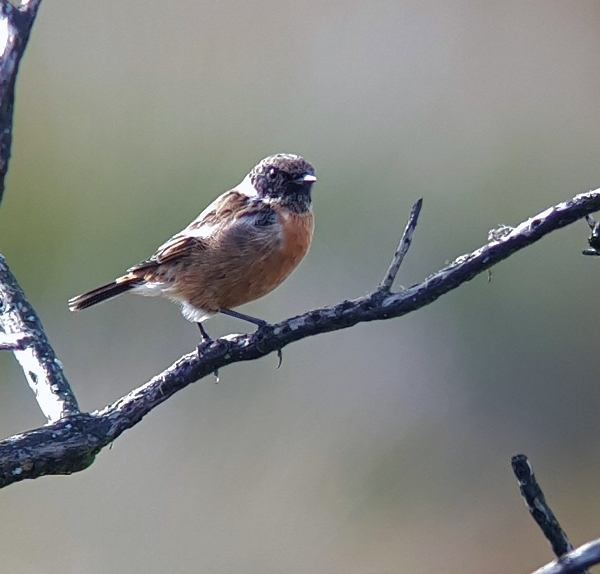 Our second stop was at Sherford Bridge in another area of Wareham Forest, the footpath takes you through mixed woodland and onto a heath of gorse and heather. In an area of mature oak trees we found a flock of Chaffinches, Eurasian Nuthatch, Eurasian Treecreeper and more Blue and Great Tits. We scoped a large open grass meadow and found several Stonechats, a large flock of Meadow Pipits and a few more Chaaffinches. 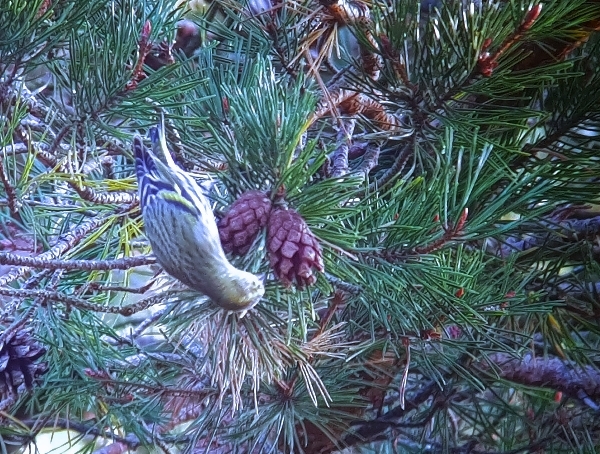 porr record shot of a Siskin

More Siskins were seen as we walked through a pine copse, but our search for a Marsh Tit went unrewarded, we did see a Great Spotted Woodpecker in flight and a Great Cormorant high in the sky. Once we broke out onto the heath it took us all of one minute to find a Dartford Warbler, in fact within 10 minutes we had seen 3 or 4 of them. We also found more Stonechats, a few Goldfinches and just before we left a small party of Common Crossbills dropped noisily into the young pines around us, what a great sight they were. 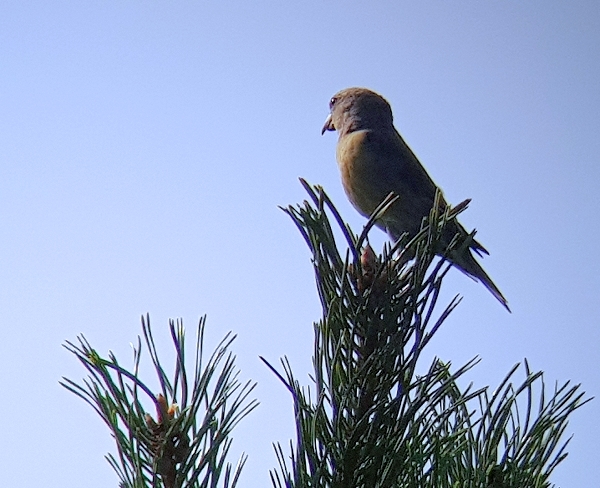 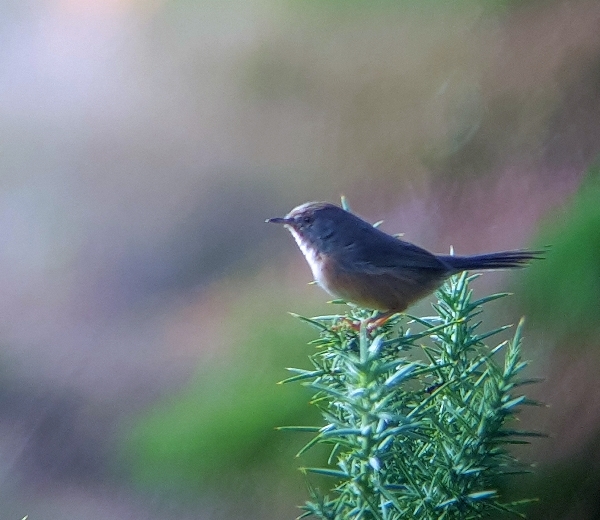 The heath was a blaze of colour with the yellow of Dwarf Gorse and the pinks and purples of three species of Heather,  Cross-leaved Heather (Erica tetralix), Bell Heather (Erica cinerea)  and Common Heather or Ling (Calluna vulgaris). 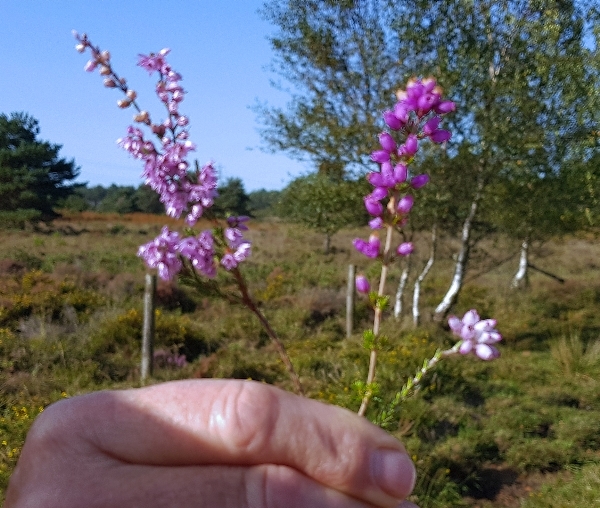 We returned to car park and whilst drinking a quick cuppa we found our first Spotted Flycatcher of the day. 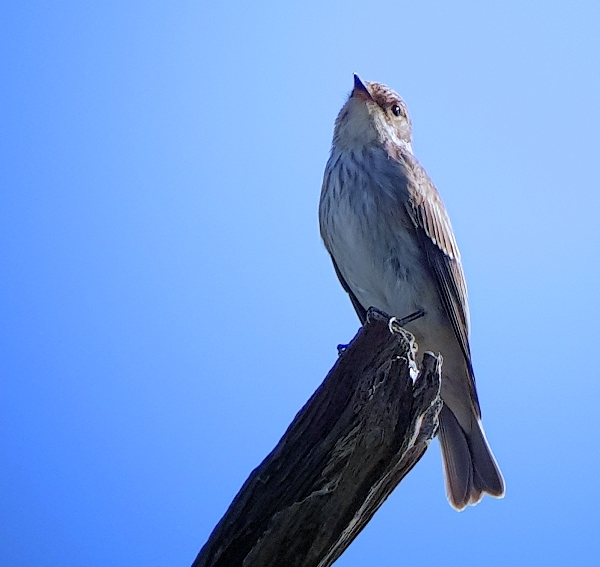 Our next venue was the open salt marsh of the RSPB reserve at Lychett Fields, it took about 15 minutes to get there and despite the time being just before lunch we decided to take a bite to eat before we set off on foot. The track down to the reserve had mature hedgerows on both sides and even though a large amount of noise came for the busy A35 close by we heard quite few birds along the way. 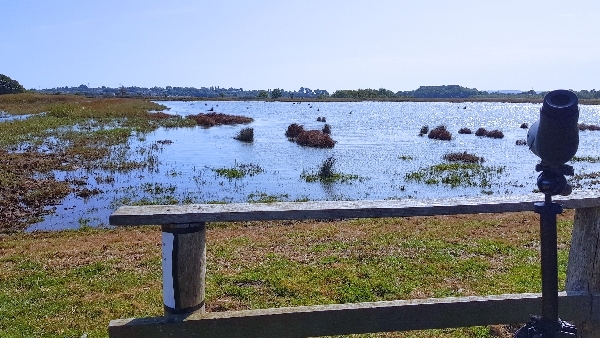 We found two more Spotted Flycatchers and saw many of the common garden species as well as many Swallows and House Martins flying over us. As expected the marshes were flooded as the tide, at this time, was high. Many Stonechats were in fields as we walked across them and Goldfinches with a few Linnets were feeding on the thistle seeds. 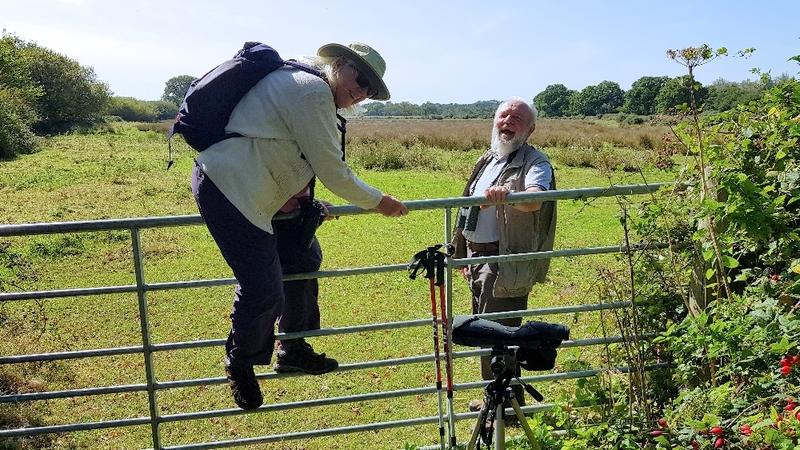 Mike and Lorna sneaking out the back door to the Reserve to avoid paying!!  Ha, Ha!

From the viewing points we scoped the shallow lagoons, many Pied Wagtails fed along the edges and dozens of Common Teal dabbled in the shallows with Gadwall and Mallards. A large flock of Black-headed Gulls roosted on an island whilst a single LBB Gull and my first Common Gull of the Lockdown sat out in the water.

Another island held a large group of waders, we picked out Redshank, Greenshank, Green Sandpiper, Ringed Plover, a single Spotted Redshank and a couple of Lapwings. Before we left a Sparrowhawk flew over and disturbed all the waders and as we crossed the fields we searched for a reported Whinchat in the fields without success. 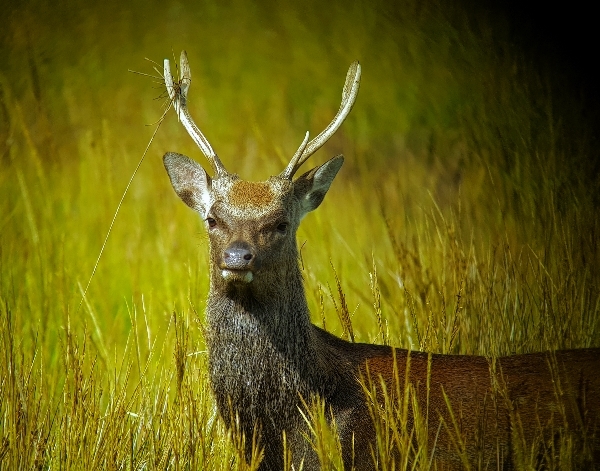 From Lychett we drove to the Arne Peninsular and parked on the heath where a track takes you to a hide that overlooks a bay of the Poole Harbour complex, the area is called Middlebeare. Along the way we saw lots of Stonechats, a single Whinchat, a couple of Blackcaps, a Chiffchaff and more Meadow Pipits. 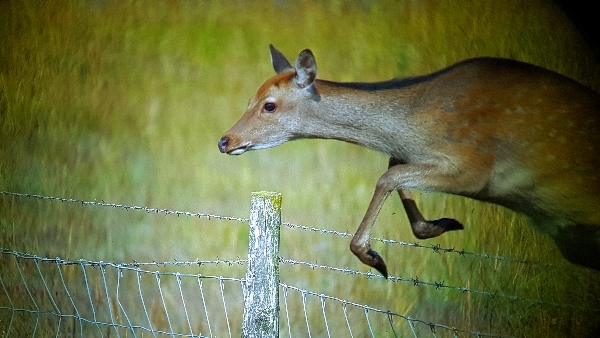 From the hide a receding tide began to exposed many areas of exposed with many birds gathering to feed there. We had great afternoon light as the waders gathered to feed, a huge flock of Avocets were surrounded by Wigeon, Pintail and Teal on the far bank a couple of Spoonbills stood fast asleep with 7 Little Egrets and a Grey Heron. Further scanning of the channels and mudflats produced sightings of Grey Plover, Redshank, Ruff, Dunlin, Curlew and Curlew Sandpiper. 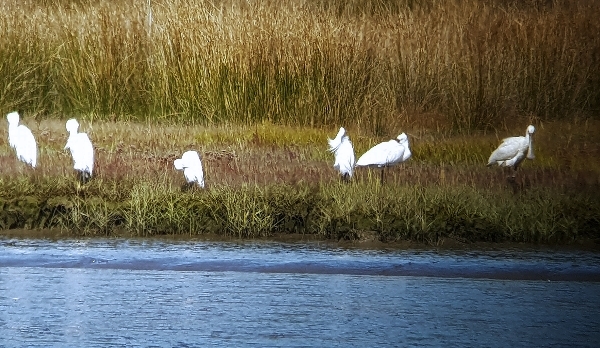 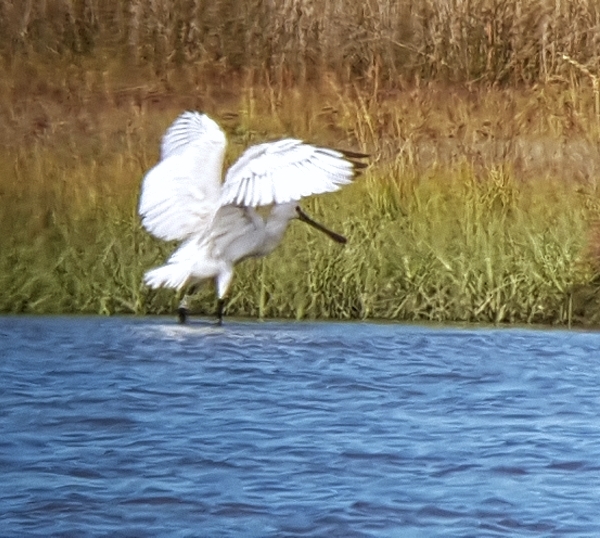 We were informed that an Osprey had flown over behind the hide, but we never saw it, we did see Common Buzzard, Raven and an Oystercatcher dropped in.

Avocets with Wigeon, Pintail and a Redshank

Our walk back to the car produced more sightings, we saw a flock of Starlings then a bunch of Mistle Thrushes flew towards us and landed close by in the trees. We had a short view of a Marsh Harrier, then we had glimpses of a Common Whitethroat, a Willow Warbler, we found two Northern Wheatears on a grassy bank with even more Stonechats and Meadow Pipits. 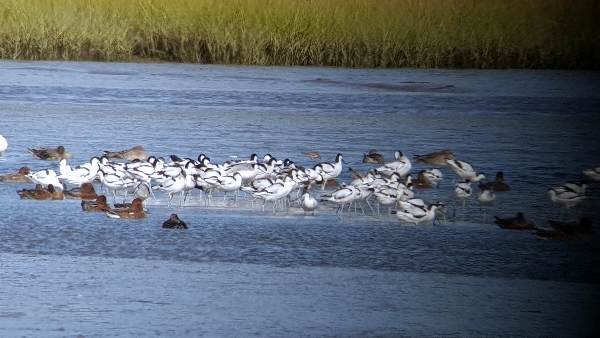 At the car we had another cuppa whilst enjoying the afternoon sunshine and the views across Hartland Moor. We searched for a sighting of a Hobby but instead we saw three Common Kestrels and more Stonechats.

It was now 4:30pm and time to head off back to Dorchester, I dropped Mike and Lorna off and drove back to Stoford. It had been a great day out and we had seen 73 species, I added 10 new species to my September list which now stands at 124.