This was my second day with Mike and Lorna, it began at the Premiere Inn in Glastonbury at 8am. We immediately headed for Cheddar Reservoir because a sighting of the uncommon Red-necked Grebe had been made yesterday. Our route took us across the ‘Levels’ and we made a brief stop on Tealham Moor to look for Cattle Egrets, our only sighting of them was of a small flock of seven birds flying over the road above us. We made a brief stop to scan the field, noting, Mute Swan, Little Egret, Meadow Pipit and not much else, the cold wind drove us off. 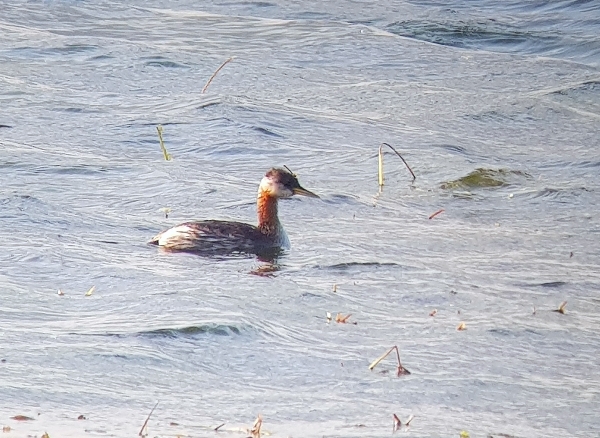 Twenty minutes later we were walking up the steps from the car park at the Axbridge side of Cheddar Reservoir and within two minutes we were watching our target species the RED-NECKED GREBE. This lovely passing migrant species was still adorned in most of its summer plumage, the red neck was very visible, how lovely was that? 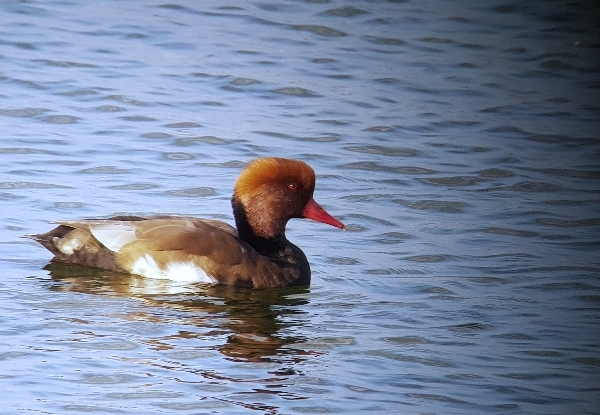 Red-crested Pochard above and Common Pochard below, both males 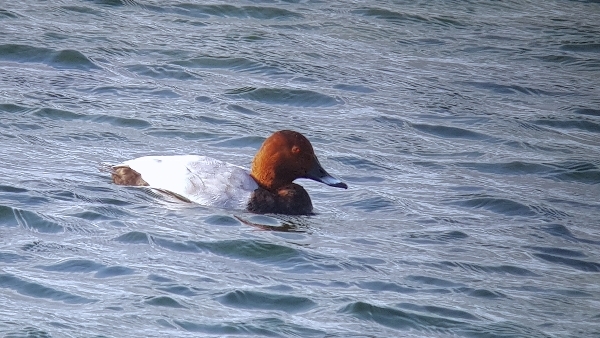 Scanning through the mass of ducks on the water we found a single Red-Crested Pochard, dozens of Common Pochard, Tufted Ducks, Teal, Wigeon, Mallards, Gadwall and hundreds, if not thousands, of Common Coots.

We then moved on to Chew Valley Lake driving through the picturesque Cheddar Gorge and the beautiful surrounding countryside. At Herriot’s Bridge it was much less windy and we had avery enjoyable visit starting with a cup of coffee. Herriot’s Pool held dozens and dozens of birds, a patch of mud formed an island in the middle of the water and this was covered in gulls, ducks and waders. We picked out Green Sandpipers, two Ruff (one large Ruff and one small Reeve) and half a dozen Common Snipe. Great White Egrets stood out like gleaming white sentinels across the water, they dwarfed Grey Herons and Little Egrets and everything else that came by. 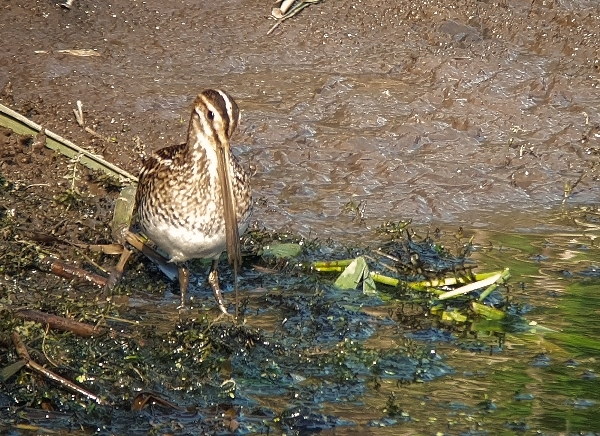 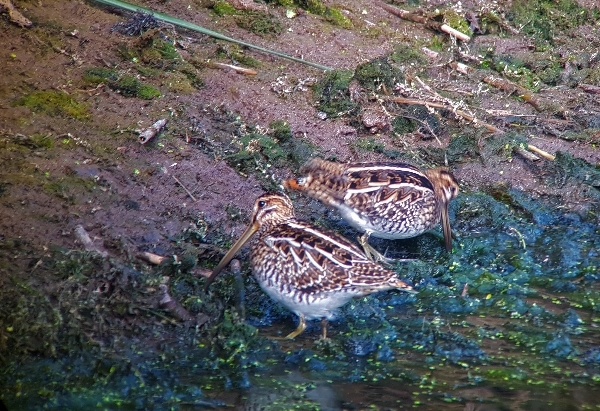 We saw Shoveler, Shelduck, Pintails and many Teal, we scanned them for Garganey which did not materialise. On the other side of the road we found some very obliging Snipe in the channel, with Grey Wagtail, a Kingfisher, fourteen Moorhens and a few Teal.  Scanning the shore of the main lake we found quite a few more waders, including:  Spotted Redshank, Black-tailed Godwit and Greenshank. The lake itself was absolutely heaving with wildfowl, I couldn’t begin to count such numbers of ducks, geese and swans. Many more Pintails, Tufted Ducks, Wigeon, Common Pochard, Coots and Swans were out there with Great-crested and Little Grebes. 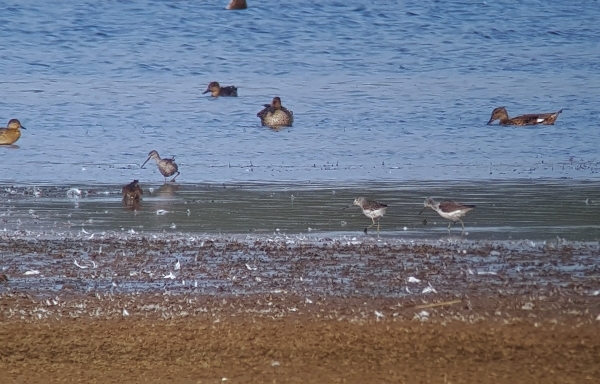 distant Spotted Redshank with two Greenshanks and lots of ducks 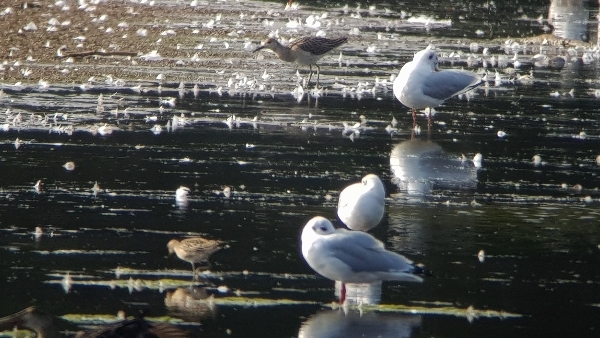 Ruff and Reeve (the smaller wader) with Black-headed Gulls

We heard Cetti’s Warbler a few times, also Water Rail calling and a flock of five Cattle Egrets flew over before we jumped into the car and drove over the Heron’s Green for another spot of birding. Once there we soon realised that we were back in the chilly wind so we didn’t stay for long. We saw Cattle Egrets in with some cattle, many more Great White Egrets and hundreds of the seven common duck species. Pied Wagtails went onto the day list but not much else. We did manage to find a little shelter behind an ice-cream van, which was rather convenient. Mike bought three large 99’s, yummy! 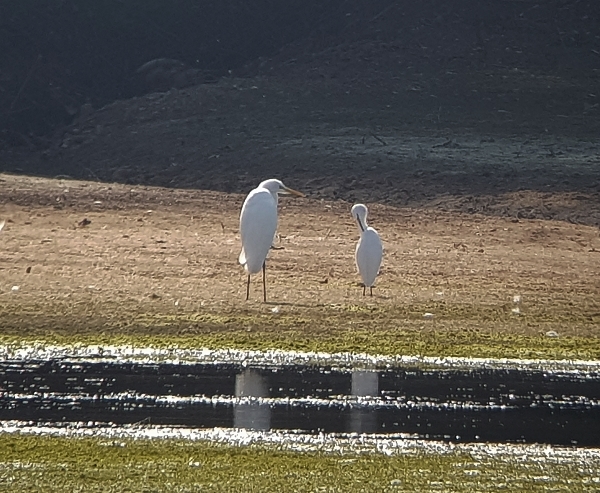 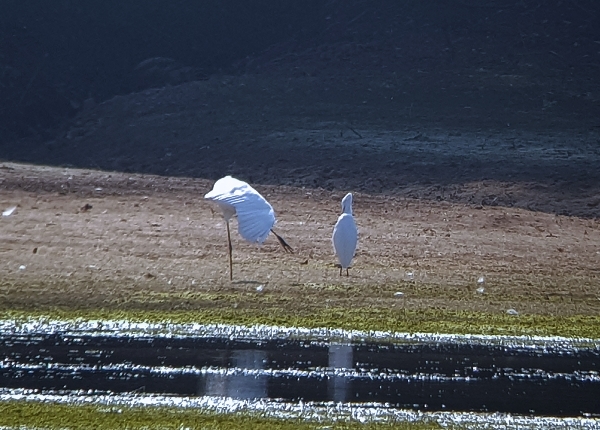 look, my legs are longer 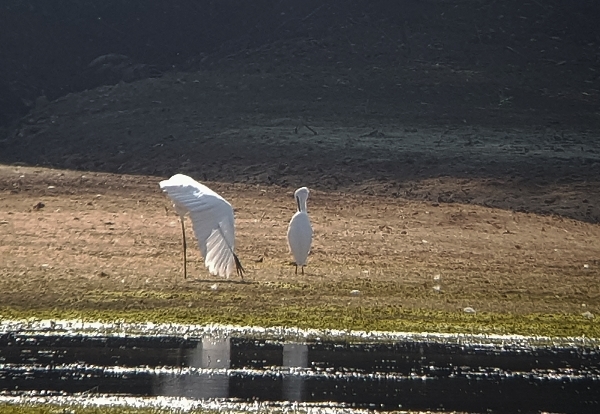 my wings are massive 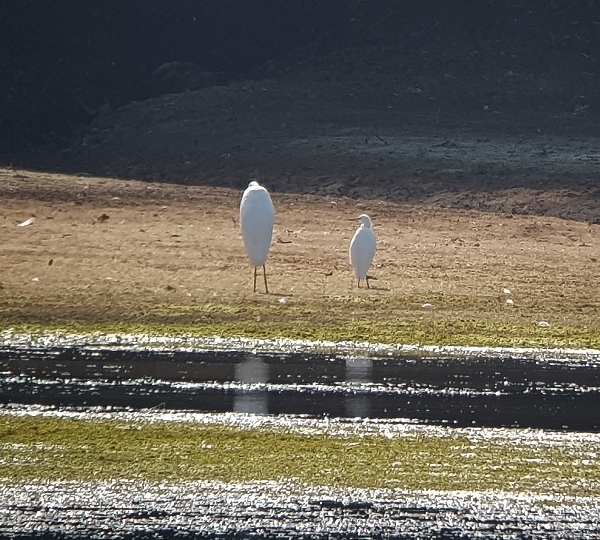 "and so is your bucking head" says the Little Egret

We went back onto the Levels for the afternoon, we parked on a very quiet lane near Mudgely where we ate our picnic lunch in bright, warm sunshine. For next couple of hours we walked along London Drove, a very straight track that takes you into Westhay Moor with views over grass meadows, then 30 Acre Lake and lots of small, reed-fringed pools. 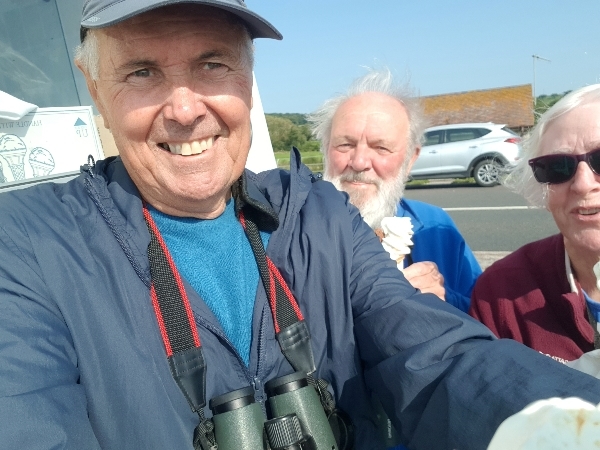 a rubbish selfie of the ice-cream eaters

Dragonflies were flying around in great swarms, Common Darters and Southern Hawkers numbered in their hundreds, we found the hawkers perched in a hawthorn en-masse. I have never seen dragonflies perched in groups before, have you? 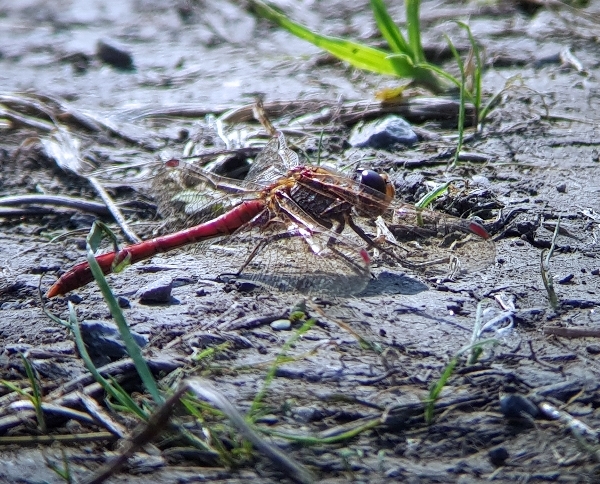 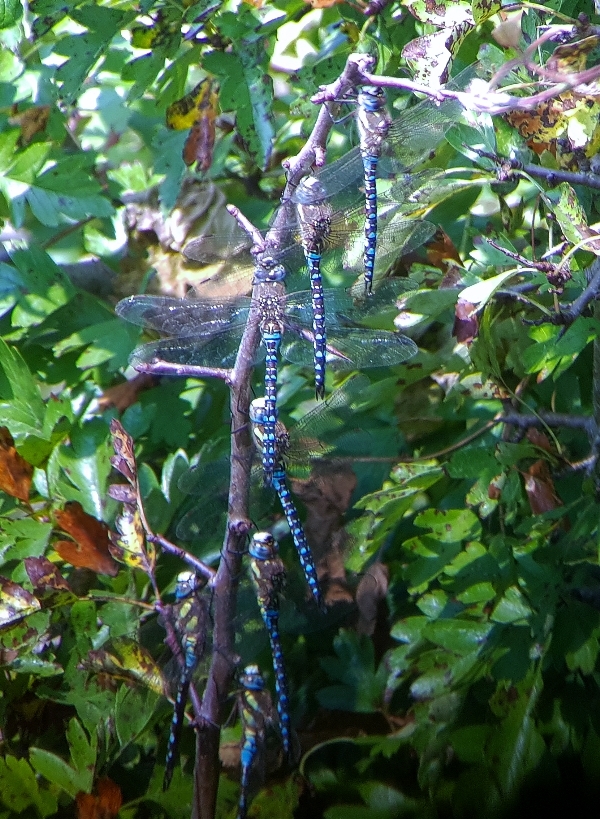 A mass hang-out of Southern Hawkers

From the hides along London Drove we enjoyed close views of Gadwall, Little Grebes, Marsh Harrier and Mike got a short view of a Bittern flying across the water from reedbed to reedbed. It was a very pleasant couple of hours but a bit of a come-down from the dizzy heights of this morning’s birding. 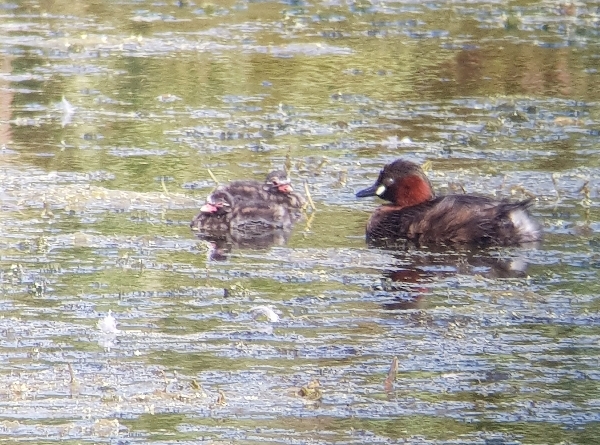 From Westhay we drove to Catcott Low RSPB Reserve where we finished the day off. We had the hide to ourselves and stayed until 4:30pm. Several Cattle Egrets entertained us, with lapwing, Common Starlings, Gadwall and Little Egrets all in close proximity to the hide. Further afield we saw Stonechat, Common Buzzard, Common Kestrel and after a long wait we eventually had distant views of a Hobby hawking above the marsh. 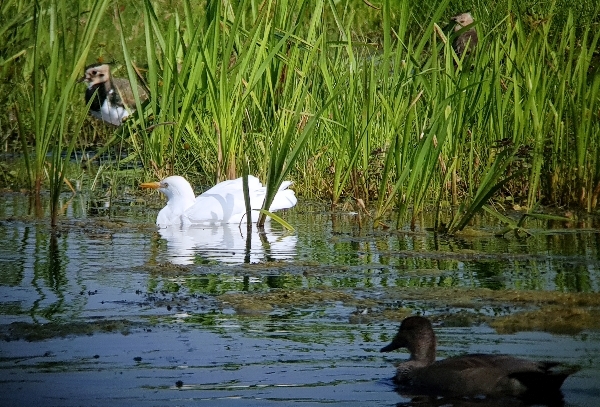 this Gadwall is not impressed by the Cattle Egret trying to swim in his pool, the Lapwing is having a laugh

Well that ended my second day with Mike and Lorna, it was great to see them again. I dropped them off in Glastonbury, they were staying the night before driving back to Sheffield tomorrow, with a stop off at Slimbridge along the way.