A DAY TRIP TO CORNWALL - HAYLE ESTUARY AND PORTHGWARRA

WEATHER; dreadful for most of the day, some dry, sunny spells around lunchtime. Temp 14C

A day visit to Cornwall, We must be mad!! Nigel arrived at my house at 4am, he wasn’t expected until 5am! We were supposed meet at a place along the route but he decided to drive all the way to mine, we meet in the car park at 4:30 and he jumped into my car for the journey down to Hayle in Cornwall.

It lashed down with rain for most of the journey, it never got light until we were almost there at 7:30am and then the light was so poor we could hardly make out birds on the shore. Dull, cold and wet is how I described our first hour, we parked near to the large tidal pool know as Carnsew, this is where both a Semi-palmated and a Baird’s Sandpiper had been seen for the last week or so, I needed both for my year list. 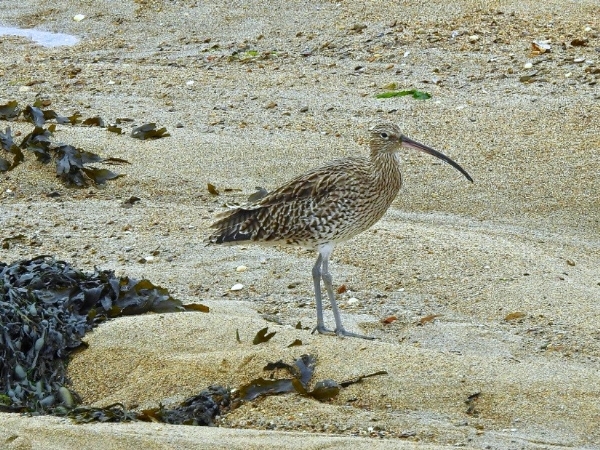 After parking the car we braved the cold morning in poor light and began our walk to circumnavigate the tidal lagoon at Carnsew. We expected to see a few birders about but all we saw was a few dog walkers. Curlews were the first birds on the list, followed by Ruddy Turnstone and a Common Sandpiper. The tide was still coming in and so most of the waders were being pushed to the margins of the ‘basin’  to our advantage. 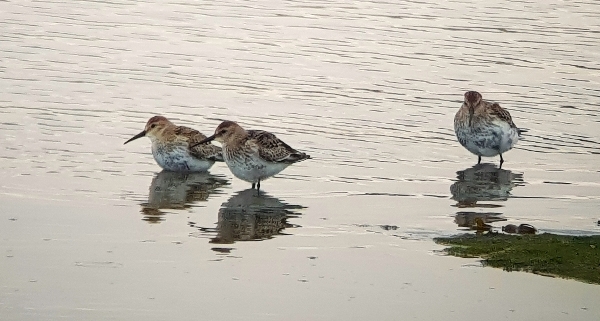 Dunlin in the poor morning light

One sandy corner attracted a few Bar-tailed Godwits, we watched them for a little while when suddenly they all flew up, except for one. 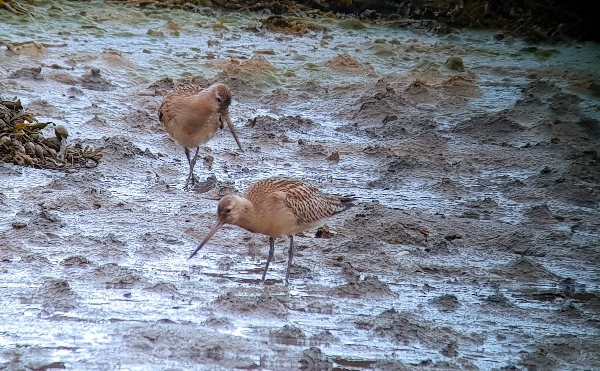 Bar-tailed Godwits - one of these two was just about to die!

A Peregrine Falcon swooped down and took the unsuspecting bird right in front of our eyes, the stealthy killer flew onto the nearby rocks with the Godwit flapping for its life. It was too late to struggle, once you are gripped by the talons of Peregrine I’m afraid its goodbye. The peregrine began to pluck the bird before being chased off by Crows. Well, that was an amazing and spectacular start to the day. 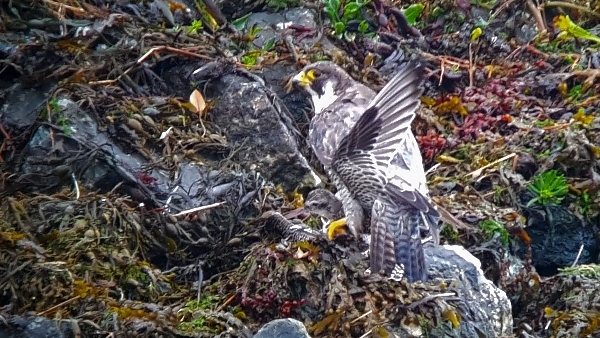 Walking further around the lagoon we added Oystercatcher, Dunlin, Canada Goose, Wigeon, Teal and lots of Gulls. After almost walking the entire circumference of the lagoon other birders started to appear, the tide was now quite high and the waders began to disappear heading off to roost. One of the other guys found a group of roosting Dunlin in the rocks along the shore of the River Hayle and after 20 minutes of scrutiny we all (except for Nigel) decided that the BAIRD’S SANDPIPER was present. It took another 10 minutes to convince Nigel but he still had some doubt,  bless him, he won't tick anyhthing unless he is absolutely certain of the bird! I can’t tell you how difficult it was to separate the Baird’s from the Dunlin in these circumstances. 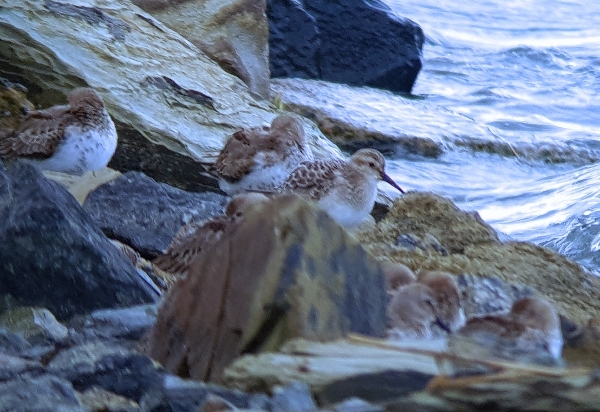 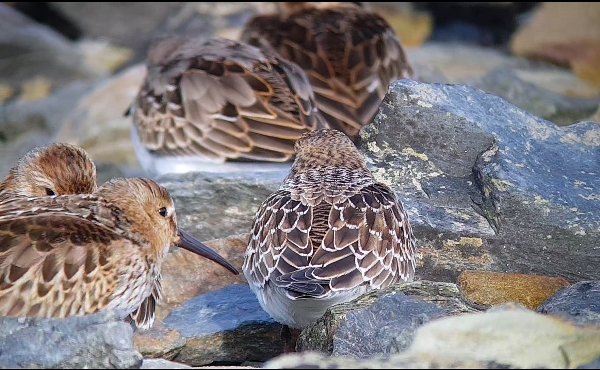 We picked out a snoozing Curlew Sandpiper too and we took as many pictures as possible in the windy and wet conditions, it was hard to keep the telescope still when taking my pictures. 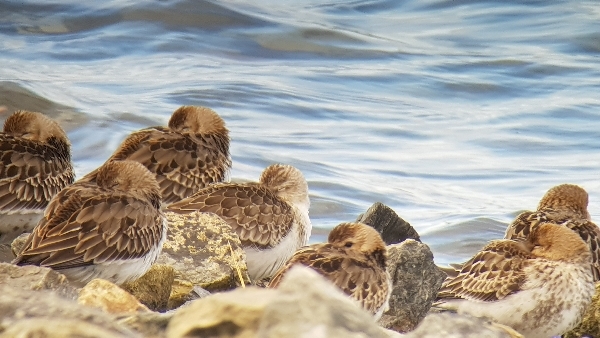 can you pick out the Curlew Sandpiper? - Clue? The Sandpiper has an obvious white eye-ring and the Dunlin does not 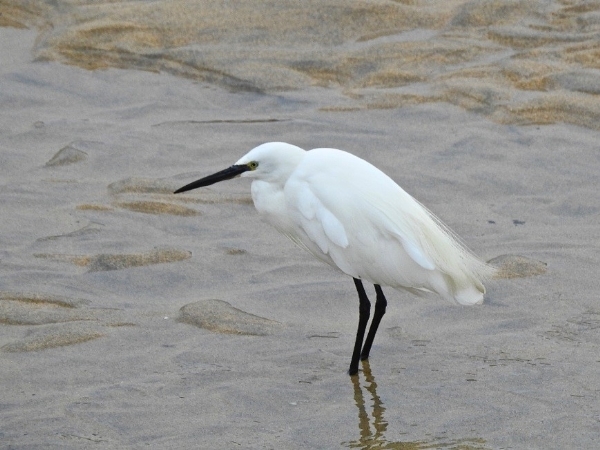 From Carnsew we drove the short distance to Ryan’s Field, an RSPB reserve, its a flooded meadow where many birds spend their down-time during hide tide, we saw nothing new there at all. By this time the battery went dead in my phone and I had left my charging lead at home!! Doh!! 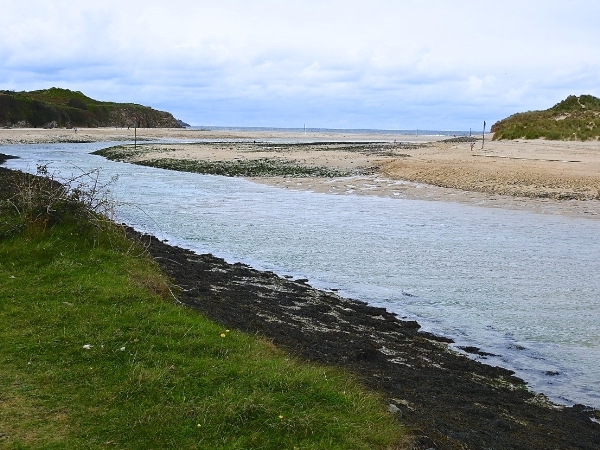 After a cup of coffee and a snack we drove across to Porthgwarra, a headland on the coast where many famous sea-birds have been sighted over the years. In recent days a number of exciting finds had been made along the coastal path and in the scrub, such as, Wryneck, Tawny Pipit, Paddyfield Warbler, Lapland Bunting, Black Kite, Yellow-browed Warbler – how about that for starters? On arrival we learned that a Greenish Warbler had been found a couple of hours earlier in the clump of sallows next to the car park, so we searched there for a while before going for a walk. 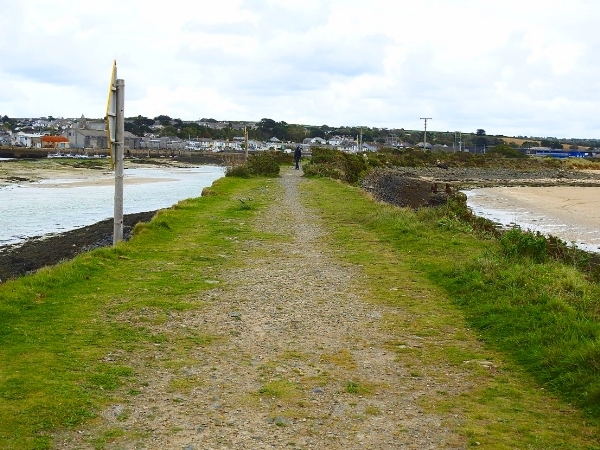 the walk out to Godrevy Point taken by Nigel

Of all the mouth-watering birds on the recent list from Porthgwarra, guess what we saw………zilch!!! Not a bean. I did see two additions to my September list -  Northern Gannet and Red-billed Chough these birds helped me achieve my target number of 130 species for September, so I must not grumble.

We ate our picnic lunch back in the car park before heading down to Land’s End where a guy had just been watching a Wryneck. The car park was jammed full of tourists, they were everywhere and the charge for parking was £7!!! We turned around and headed back to Hayle. 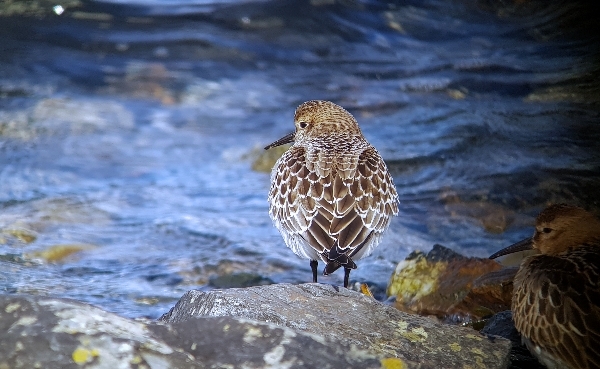 last one of the Baird's Sandpiper

I wasted a lot of time stopping off at various supermarkets trying to buy a charging lead for my phone without success and it was after 2pm when we got back to Hayle. The tide had receded by then, the mudflats were covered in birds, thousands of them. We parked in a pub car-park and scanned the mudflats adding only Greenshank and later Redshank to the list. A guy told us that the Semi-palmated Sandpiper had been seen roosting around 1pm on Godrevy Point, so off went.

We searched for an hour or so but the tide was really low now and all the waders were off feeding in the estuary. At 4pm the sky darkened and the rain returned, it was our cue to get back into the car and to head off home which we promptly did.