WEATHER: a lovely start to the day, perfectly still with high cloud and sunny spells. Later it clouded over and rain began a 6pm.

It was just great to walk my local patch once again, I really enjoyed myself. It seems like months since I walked the Yeo Valley tracks but in reality it has only been 10 days. The autumn colours are more prevalent now and bird song has virtually died except for Robins.

New month – New list.  I left home at 8am and my first bird of the month was a Wood Pigeon, quickly followed by a Robin, then a few Jackdaws and House Sparrows. A couple of Barn Swallows flew over me as I left the car park and began my walk along the lane towards Yeovil Junction, as I crossed the road bridge over the stream I noticed how the water level had risen after last night’s rain. 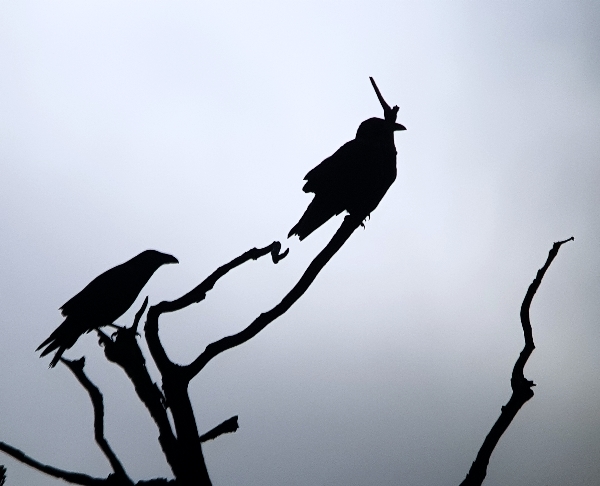 unmistakeable silhouette of the Raven

Once on the track into the valley I started listing new species for the monthly list, Carrion Crow, Great Tit, Magpie, Red-legged Partridge (heard) and a pair of Ravens sat in a dead tree on the top of Rook’s Hill and a Grey Heron flew up from the stream.

I walked into the second meadow and found a flock of Siskins, five flew over me and at least 20 fed in the Alder Trees. This was my first sighting of this species this year in Yeo Valley. I couldn’t tell whether these were passing migrants or my regular winter flock, time will tell. Whilst watching the Siskins I also saw a party of three Jays, a Chiffchaff and a Blackcap. 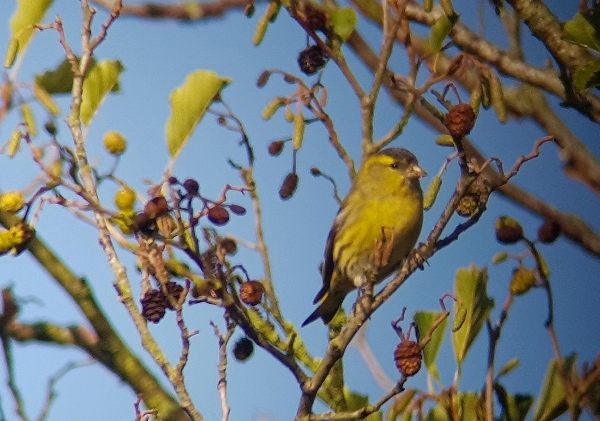 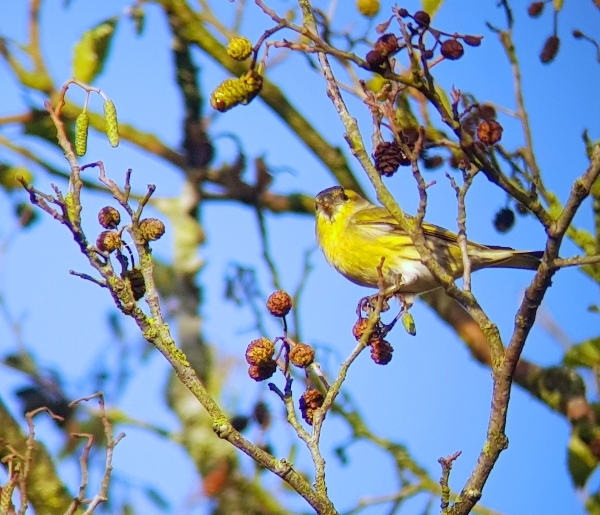 The Grey Heron sat in a pine tree a little further along the stream and as I walked up to Rook’s Hill I found a large flock of Meadow Pipits in the grass, this was only my second sighting of Mipits this year in Yeo Valley. 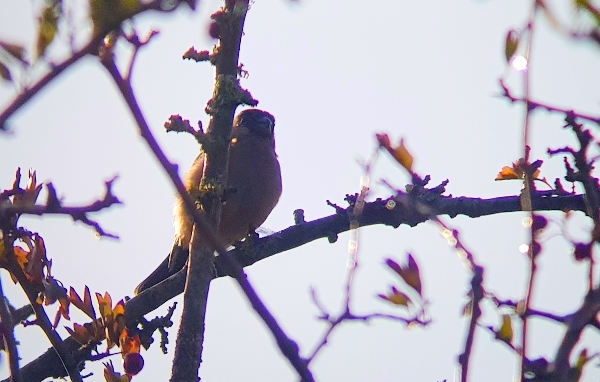 another unmistakeable silhouette - the Bullfinch 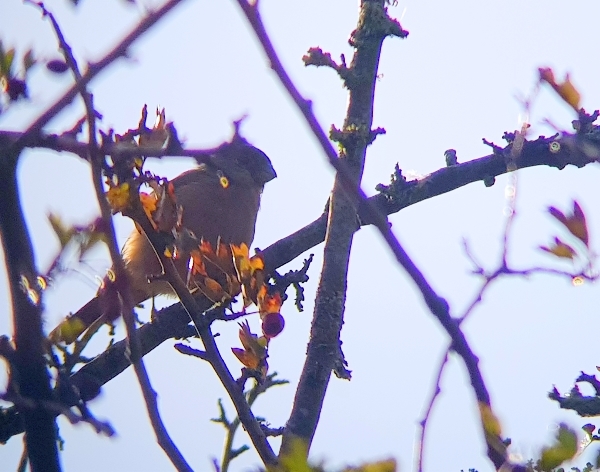 The hawthorn hedge held the usual Blue Tits, a Treecreeper and a small party of Bullfinches, as I watched the Bullfinches a flock of Goldfinches flew into the bushes. From my usual position on the slopes of Rook’s Hill I looked down to the river Yeo and across to the large dead tree and the meadows beyond. 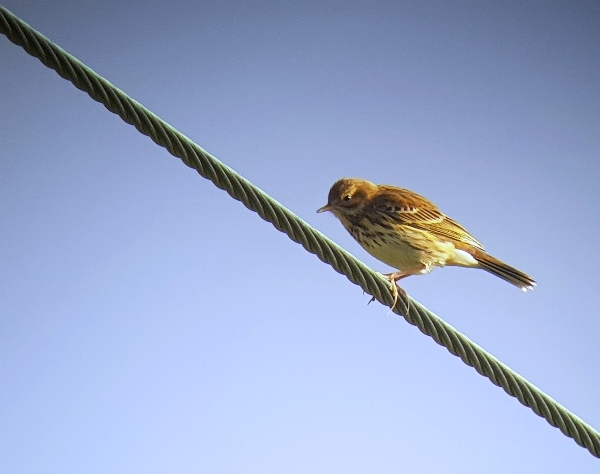 A flock of Goldfinches and a few Siskins sat in the dead tree, they all suddenly erupted in panic as a kestrel flew into the tree, there was a lot more Siskins than I had thought. Sunshine bathed the slopes I watched Dunnock, Robin, Blackbird and a Wren before a flock of Long-tailed Tits caught my attention. I counted 12 of them with a few Blue and Great Tits before I set off back down the slope towards home.

I watched a Common Buzzard circling on the thermals, a Herring Gull rifting over and many Pheasants and Partridges in the cropped fields. Another sighting of Jay and Magpie was had before I left the valley and many Barn Swallows flew south down the valley. 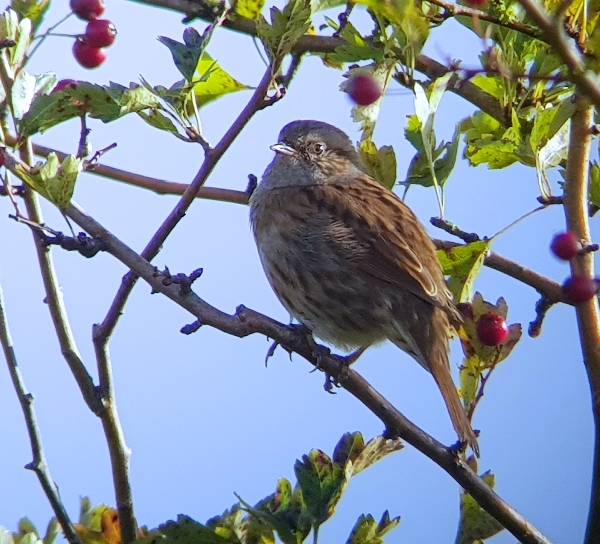 As I crossed the road bridge over the stream I noticed some brown shapes moving in the water, I knew exactly what they were…… Otters!!  A whole family party of them, how fantastic was that? I moved out of the line of sight and began to film them using my scope and my phone, very soon they were too close to use the scope so I filmed them with the phone alone. 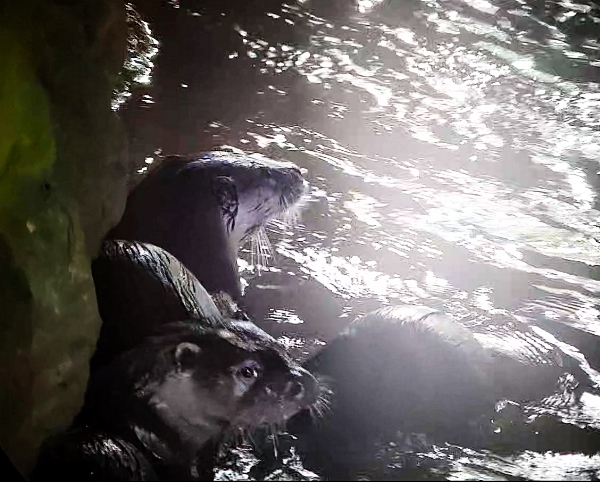 the Otters - phone-scoped under a railway bridge 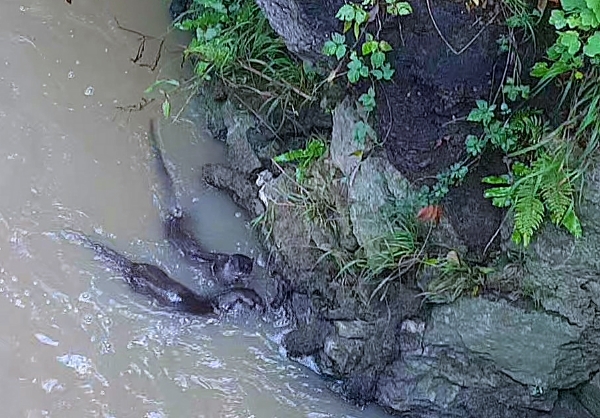 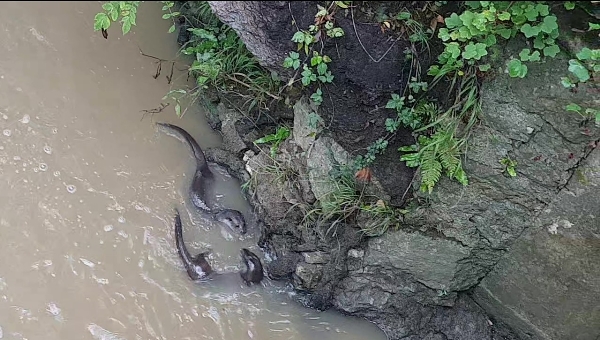 It was a tremendous experience, they simply ignored my presence and drifted off downstream, well that made my day and concluded my sightings for the day.