A MORNING WALK FROM CENTRAL WEYMOUTH TO FERRYBRIDGE

Dawn and I decided to travel down to the coast at Weymouth to go for a nice walk in the sunshine, it was Dawn’s inaugural birding day with her new birthday binoculars. We parked near Radipole Lake and found the start of the Rodwell Trail, this trail is the route of the old railway track that used to run from Weymouth all the way to Eastern on Portland, it would be a fantastic tourist attraction today if it was still running.

our first view of the Harbour looking south towards Portland

The trail takes you along the northern boundary of Portland Harbour and out to Ferrybridge where it follows the main road up to Fortuneswell on Portland, it then enters MOD land for a while before following the east cliffs into Eastern. We only walked the 3 miles to Ferrybridge but we saw plenty and enjoyed the this very ‘green’ corridor where many trees made it quite quiet and secluded, you wouldn’t know that you were passing under several very busy roads.

Lots of common garden birds fed in the bushes, we often heard small parties of Blue & Great Tits and one large party of 22 Long-tailed Tits! We saw Greenfinch, Goldfinch and Chaffinch as well as Stonechat, Jay and Magpie.

From several places we could scan the northern section of Portland Harbour but we only saw Cormorants and Herring Gulls. We arrived at Ferrybridge just in time for lunch and just when the high tide was turning, perfect. There must have been a couple of hundred Mediterranean Gulls sitting out on the water with Black-headed, Herring and Great Black-backed Gulls. A couple of Great Crested Grebes a single Shag and three Dark-bellied Brent Geese were also seen.

Ferrybridge was at high tide when we got there

During lunch the tide began to drop and some muddy margins appeared around Ferrybridge, 3 Bar-tailed Godwits dropped in with 8 Dunlin and a dozen or so more Brent Geese appeared, I was hoping that any of the 3 Black Brant Geese, known to be in the area along the Fleet, would drop in but they didn’t whilst we were there.

many Mediterranean Gulls on the shore at Ferrbrdige 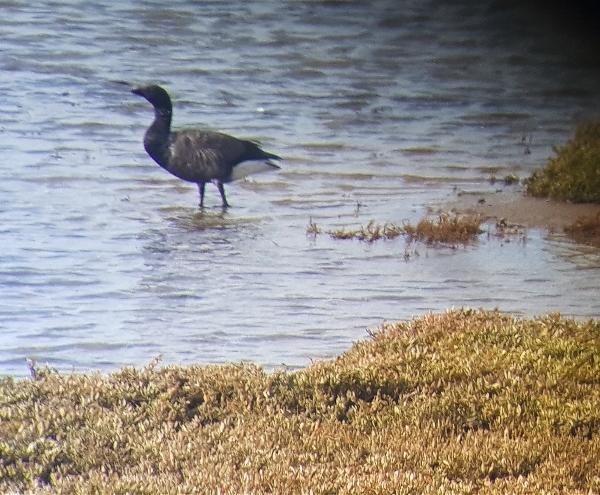 Dark-bellied Brent Goose taken through the window of the cafe

We added Common Chiffchaff, Goldcrest, Kestrel and a Song Thrush to the list during the return journey. It was 3pm when we left the area and headed for home.