It has been quite a while since I walked the entire circuit around my local patch in the Yeo Valley so I thought I would give it a bash today. It was late when I left the flat, 9:30am to be precise, I was up late. 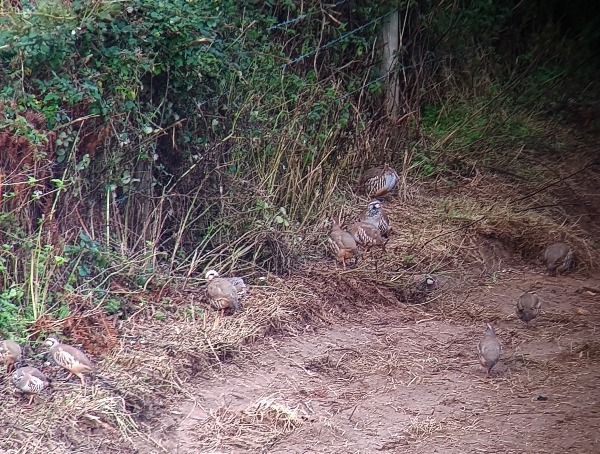 a group of Red-legged Partrdiges - released for sport!!

A Jay flew across the car park as I made my way round to Station Lane, just recently I have seen them several times around our home collecting acorns, which are aplenty this year, but I can’t see where they are taking them to bury. As I walked through the gate and onto the track that leads into the valley a small flock of Fieldfares (6) flew over making their ‘rattling - chattering’ call and whilst I was looking at them I noticed 4 Redwings flying much higher in the same southerly direction. 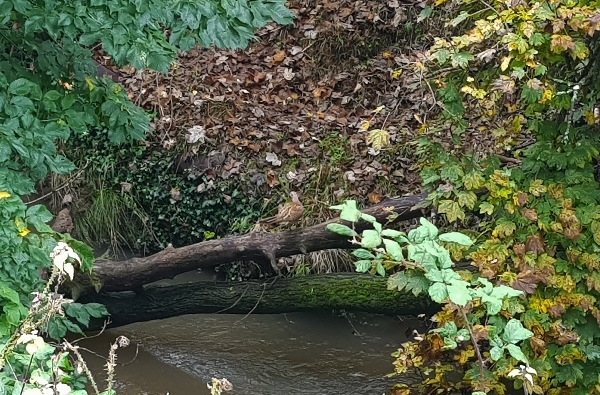 there is a female Pheasant here, walking across the stream on a fallen log - they love to do that rather than flying across

Sighting from then on were few and far between, apart from dozens of ‘released’ Pheasants and Red-legged Partridges, I heard a Common Buzzard that was calling from beyond the meadow, I saw a Grey Heron that flew up from the stream and the usual, ever-present ‘clatterings’ of Jackdaws could be heard constantly. 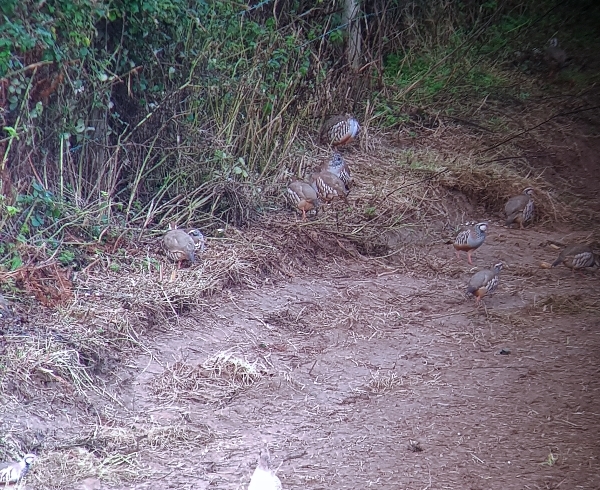 Red-legged Patridges - can you see all 11 of them?

As I walked across the second meadow towards the confluence of the Stream and the River Yeo a flock of Siskins flew over me and landed way back in the line of Alders along the stream, I scoped them and counted seven birds. I never saw much else until I stood on the slope of Rook’s Hill, from my position and height I was at eye levels with most of the trees that lined the banks of the River Yeo. 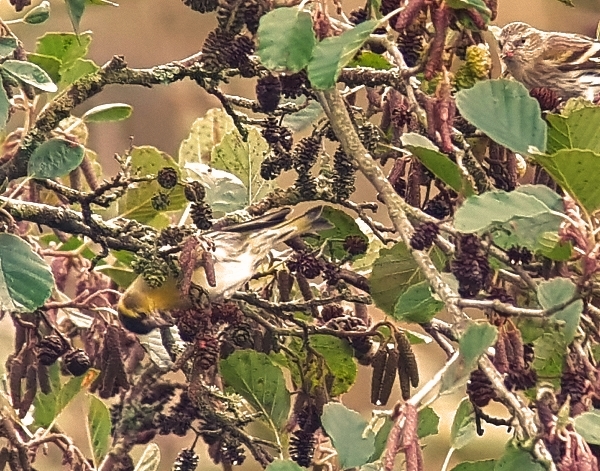 Siskins - there are two in this picture can you seen them both?

The large dead tree held the usual small number of Goldfinches, this time however a few Chaffinches joined them. I then heard a Green Woodpecker and scanned down below and behind the dead tree to see a male sitting on a fence post. Behind the woodpecker a male Pheasant was standing right up against the wire mesh of the fence, on the other side stood a female, Ha! I don’t think the male realised that he could fly over the fence, sometimes Pheasants are a bit stupid. Two other males appeared on the same side as the female and this agitated the first male but he still done nothing about it.

a male Green Woodpecker sitting on the fence

A Blue Tit, then a Robin and finally three Dunnocks landed on the fence and the Woodpecker made a few sorties down into the grass, I was then distracted by another flock of Siskins. This time they were closer and at eye-level, so I fired a few shots off using my phone and the telescope. 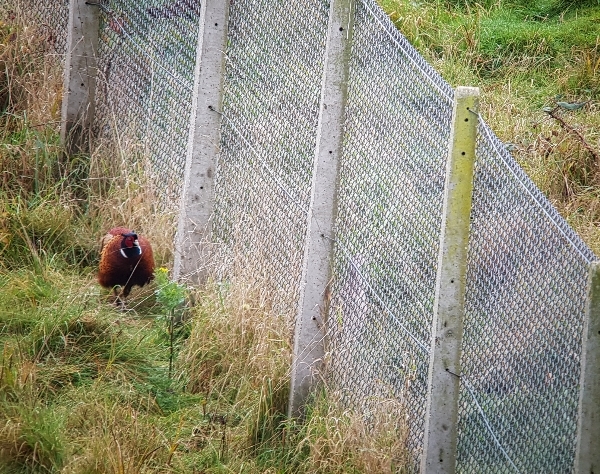 the Pheasant and the fence

It started to rain at that point, so I decided to leave, I walked up and over the top of Rook’s Hill, a few herring Gulls flew over, a |Raven called behind me but I did not see it.

the two fields which featured a lot in my early spring blogs, they were ploughed and seeded in April, harvested in August. You can just see a strip of maize on the top of the right hand filed which is yet to be cut.

As I crossed the top of the hill I found a few parasol mushrooms, some of them were still in good shape so I picked them, guess what we had for lunch, yum, yum!!