A thick frost covered the ground and an even thicker mist filled the air, it was cold out there, but it was absolutely still, I love these mornings. I bet Guy Fawkes would have appreciated the cover of the fog as he set out to commit either treason or a good deed depending on what your political views were at the time.

the frosty path into the woods

the foggy meadow in Yeo Valley

I never saw or heard a bird until I was at the road bridge over the stream, then a Robin delivered a few notes and a couple of noisy Jackdaws flew over.I walked south, away from Yeo Valley and I followed the stream through the woodland. The wood was full of birds, many, many thrushes were fighting over the remaining red hawthorn berries. There were a lot of what I call ‘Viking’ Blackbirds, they are the bigger, blacker and more belligerent individuals that have migrated here from Scandinavia. I must have seen twenty of them before I clocked a ‘normal’ garden Blackbird.

A 'Viking' Blackbird claiming his bush of berries

Redwings and Fieldfares were also feeding in good numbers and I saw my first Treecreeper for quite a while, it certainly was new for the November list. As I emerged from the wood the fog seemed to have got thicker, I heard the distinctive ‘honking’ of Canada Geese, the call got louder and through the fog I made out a group of ten flying eastward. 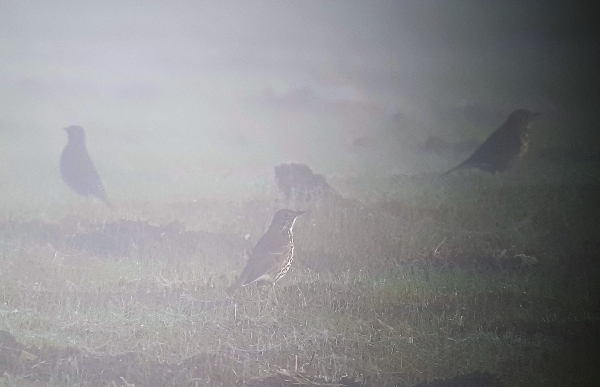 Song Thrushes and a Redwing in the meadow

I couldn’t see much in the meadows at all because of the poor visibility. So I stood and watched the hawthorn hedgerow which borders one of the meadows and I found two more species of thrush, Mistle and Song Thrushes. It was great to see them side by side, I counted three Mistles and seven Song Thrushes and lots more Redwings. 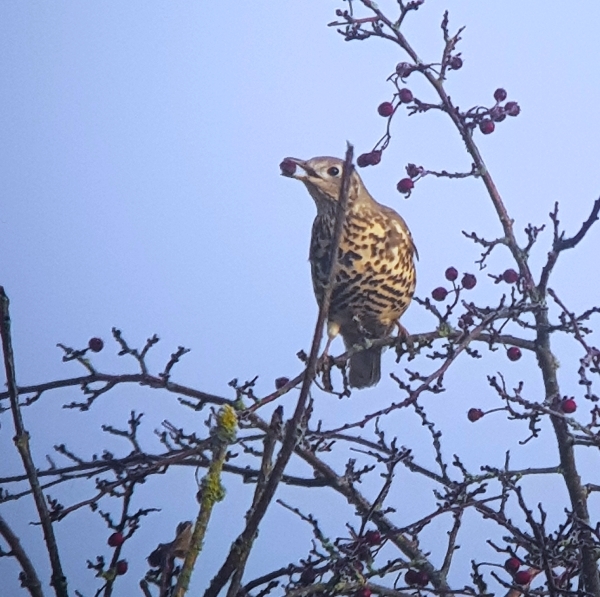 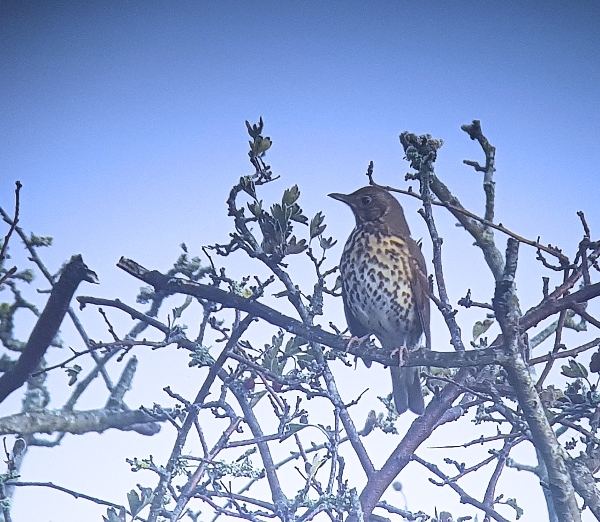 A Song Thrush in the same bush as the Mistle Thrush

there are three spotty birds in this picture, can you spot them?

If you scan the Redwings carefully you may pick out an Icelandic subspecies  (Turdus ilacus coburni), these birds are darker brown and have more dense streaking on the breast. If you get a good look at one you can see the darker legs and feet colouring, which is a dark horn brown instead of the pinkish colour on the nominate race, Turdus iliacus. I always think that they look to have a stouter bill, maybe not longer but a bit thicker, but I don’t think that there is any scientific evidence to back this up. 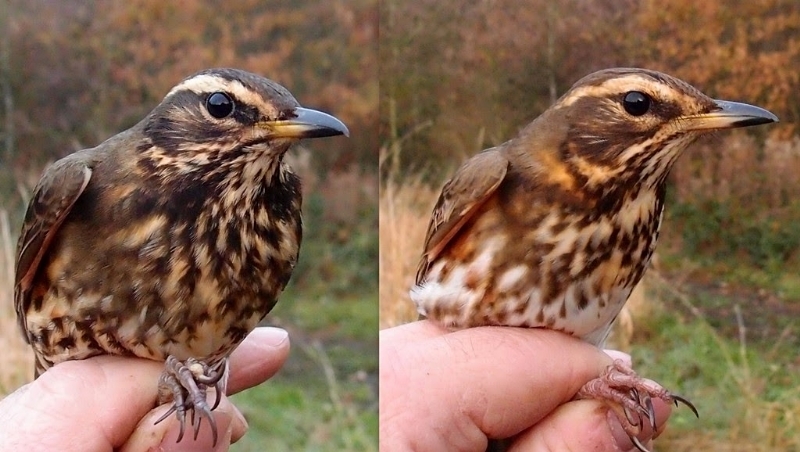 the two subspecies of Redwing:  the darker 'coburni' on the left and the nominate Turdus iiacus  on the right - photo by Peter Alker

In the hedgerow I also saw a Goldcrest, Blue Tit, Great Tit, Robin and a couple of Chaffinches and all the while I was walking through the wood, I was flushing Buzzard from tree to tree. Then later whilst scanning the newly seeded meadow I could just about make out nine Common Buzzards just sitting on the ground, I also found two Grey Herons, five Pied Wagtails, a flock of twentyish Starlings, six Black-headed Gulls (which are the first this year in these meradows) and a number of Redwings and Song Thrushes. 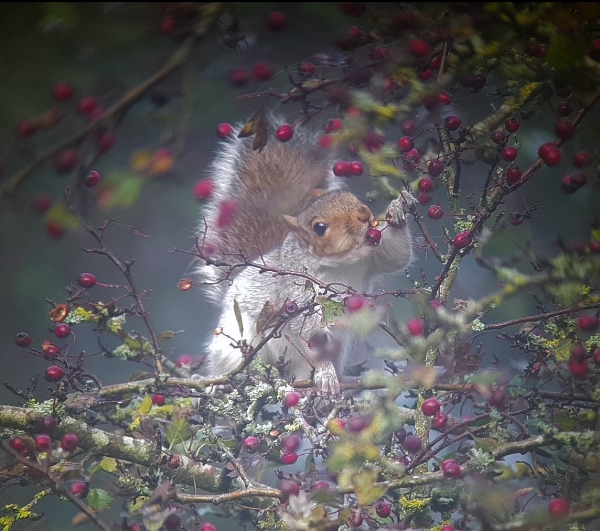 its not just the birds that love hawthorn berries

All in all it was quite productive and most of the birds would have flown off if it wasn’t for the cover that the fog offered me. 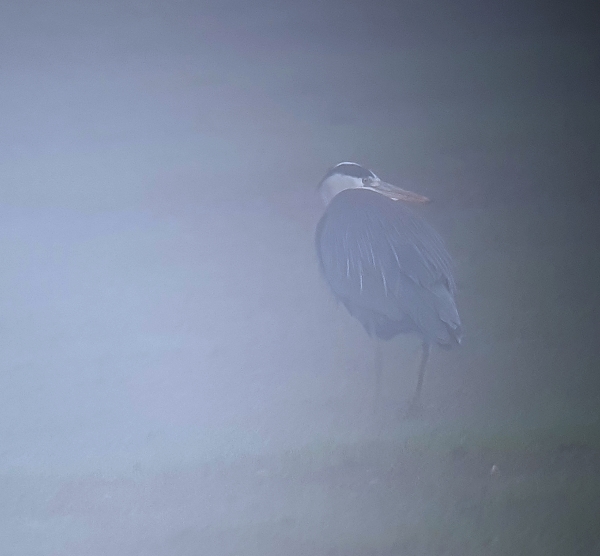 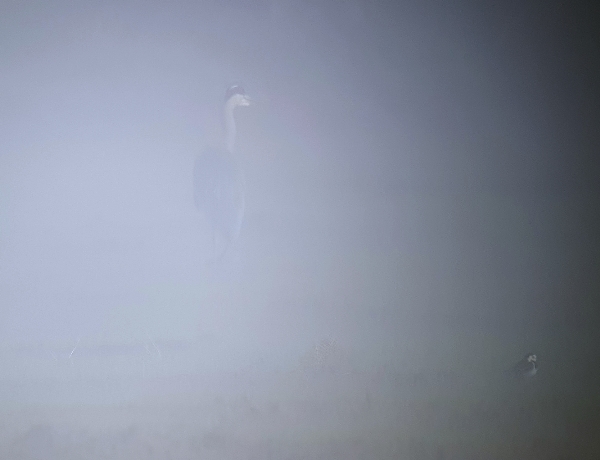 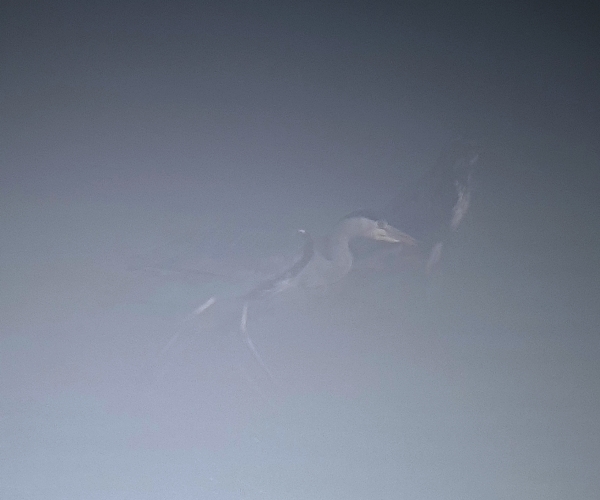 Grey Heron and a Common Buzzard 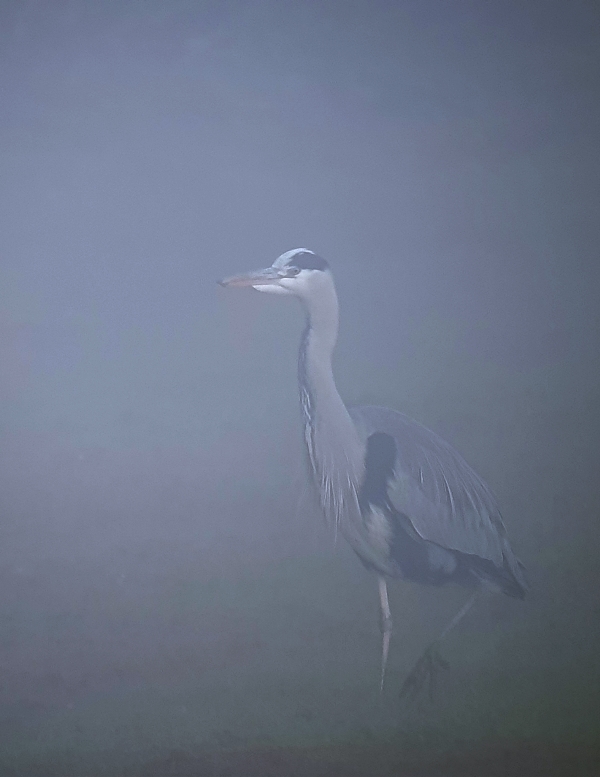 a better view of the Heron

I left the meadow after further walking along its edge where I found a Great Spotted Woodpecker, lots of Jackdaws, many Wood Pigeons and quite a few Herring Gulls.

For the last half an hour of my walk I venture into the Yeo Valley along the usual entrance track, the fog began to lift. The first birds I bumped into were Siskins, a party of around ten played their usual hide and seek game with me. When I finally caught up with them they fed on the far side of the trees in very bad light, I am yet to take a decent picture of this bird and they know it!!

finally the sun came out to play

Walking further into the valley and along the banks of the stream I found a mixed flock of Long-tailed, Blue and Great Tits, they didn’t stay long either. A single female Chaffinch sat out calling for a while and both Pheasant and Red-legged Partridge also called, I almost trod on a Pheasant, I am sure they are put there to give me heart attack (I know it is part of their defence mechanism to startle their predators but they should know me by now!!).

Ravens called a few times but I never saw one, a couple of Stock Doves flew over and I can’t remember seeing anything else. The fog cleared around 10am just as I was leaving, so I waited around to see if any insects took to the air or if the Siskins would land nearby, but neither happened so I went home. I added Nuthatch to the day list from my garden.