Only a few thrushes appeared during the two hours I was out, a few Blackbirds, a single Redwing and a flock of 35 Fieldfares flew over the valley. Today I did the whole 9 yards, I walked the complete 3 mile circuit of the valley and I did it in a reserve direction than I usually do and that was because of two Jays.

As I entered the valley track I saw a Jay fly across the track and head on up Rook’s Hill, This end of the valley has the most Oak trees and I guessed that the Jay was collecting acorns for burial. So, instead of walking along the bottom of the valley by following the track I turn to my right and walked up the steep side of Rook’s Hill in pursuit of the Jay, which turned into two birds at the top of the hill. As usual the Jays eluded me and my scope, but I met up with a couple of Pheasants, the males are looking particularly good with their winter plumes. 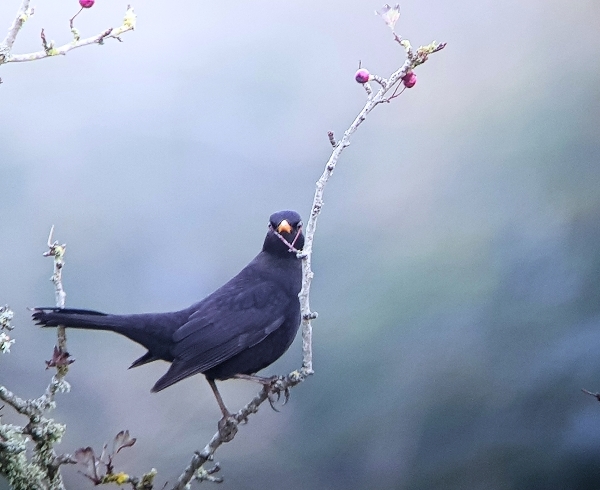 have you ever seen a Blckbird with a 'V'-shaped throat marking like this? Me neither because its a twig in front of the bird

At the top of the Hill I saw Raven, jackdaw, Green Woodpecker, a couple of Stock Doves flew over as did a Cormorant. It wasn’t until I got down to the River Yeo at the bottom of the northern slope to the hill that I saw a few more birds. I photographed this UK Blackbird in the hawthorn hedge, a Redwing flew off from there and a saw the white rump of a Bullfinch as it disappeared from view over the hedge. A Kestrel then flew into the valley and perched conveniently on a pylon below me. 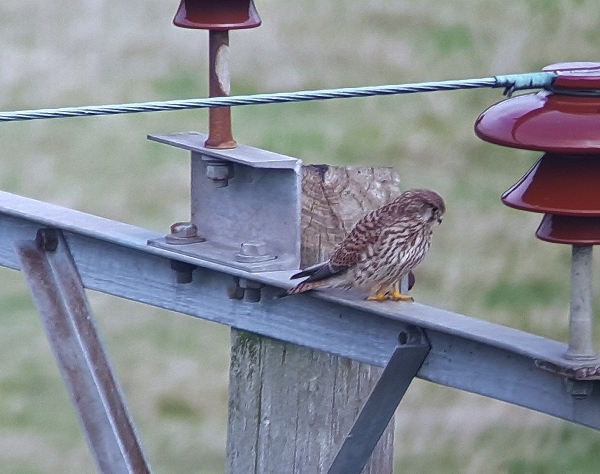 female Common Kestrel, this bird has decided to winter in the valley and has been around since September

A flock of Goldfinches danced along the top of a row of alder trees and a Common Buzzard drifted over calling. I followed the river all the way to where it met the stream, at the confluence I stood for a while and hoped for something to appear in the scrub. A female Bullfinch perched nicely for a short while and a Buzzard did the same none of which went in the can! A Grey Heron burst out from the trees just as my second Cormorant of the day flew over the top of them.

As I walked back I noticed that I was seeing a lot of Chaffinches, I counted over thirty of them and checked each one just in case a Brambling had joined the flock, that would be a great bird for my ‘patch’ list. As I walked on I got the shock of my life when a Partrdige flew out of the trees and just missed my head, I am not kidding I could feel the whiff of air from the wing beat. The Partrdige was being chased by a Sparrowhawk which had the skill to avoid me and veer off and away, I felt bad that I had deprived the hawk of its breakfast and at the same time I was relieved that I never got a face full of Partridge poo!!

The next bird I saw also sent my pulse racing!! I saw some movement about eye-level, a quick flash of green with two wing bars, OMG had I found a Yellow-browed or a Pallas’s Warbler??…………………no! I had found a female Siskin which came out from behind the leaves, ha, had me going for a few seconds.

A flock of Siskins were working their way through the alder trees and not too high up, but, the light was very bad and as a result I still do not have a decent picture of one. 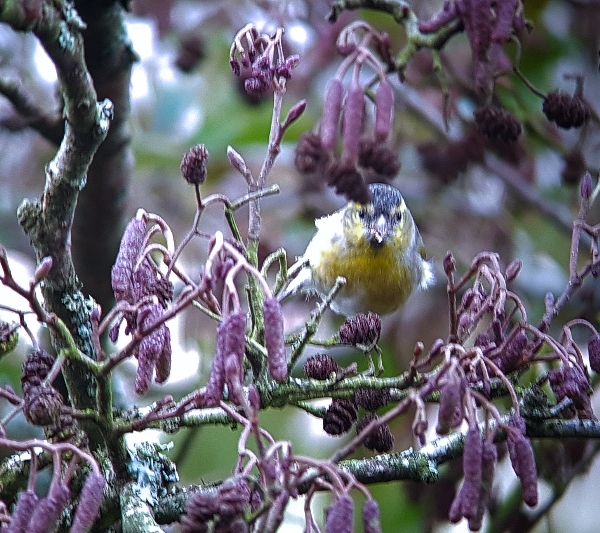 The clouds got darker and rain threatened, it was time to mosy off home and so I did.