WEATHER: dull, grey and overcast all day, with tiny spells of sunshine, no wind and nice temperatures 12-16C

I woke up late and my walk didn’t start until just before 9am. Birds in my garden included Nuthatch, Blue, Great and Coal Tits, Robin and Jackdaw, there wasn’t a single Wood Pigeon in the meadow. I wandered along the track into Yeo Valley and followed the course of the stream until I reached the line of hawthorn bushes that divides the first meadow from the much larger second one. 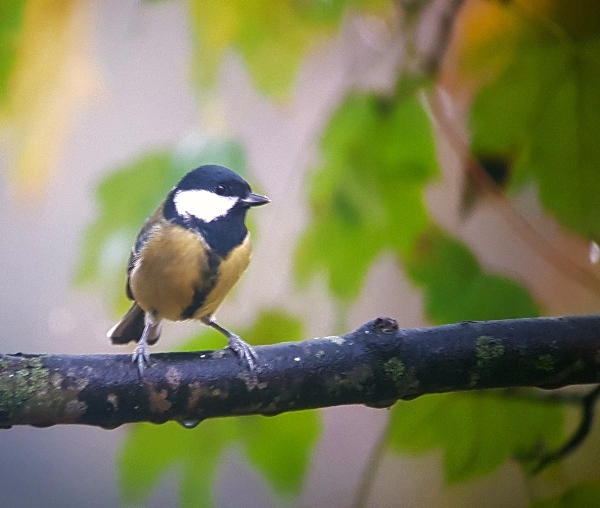 i struggled today to get any pictures, I like the colours in this one

I can’t honestly remember seeing much at all in the alder trees that line the banks of the stream, I did see the usual Pheasants and Partridges, Crows, Jackdaws, a few Wood Pigeons, Blue and Great Tits and the usual Robin, Dunnock and Blackbirds. 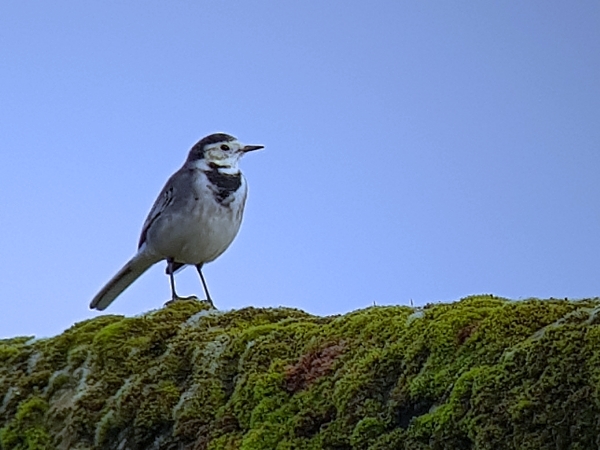 this Pied Wagtail sat on the derelict building

It wasn’t until I was walking back that something significant happened! I had stopped and set my scope on the grassy bank overlooking the stream because I saw movement in the alders, it turn out to be a small party of Goldfinches, however, I then heard a few splashing noises coming from the stream and with a bit of scrutiny I picked out the head of an OTTER. He/she just watched me for a little while and then submerged only to come up again beneath a tangle of overhanging branches. The Otter played this peek-a-boo game a few times and I found it impossible to get it in the scope never mind film it! The animal disappeared altogether a few minutes later.

Just around the next bend in the stream I saw something quite bizarre, I couldn’t believe my eyes when a live Wood Pigeon floated past me!!! The bird just sat on the water and drifted serenely and nonchalantly down the stream. I followed of course, the pigeon got stuck in a small whirlpool where it was turned in a slow but full circle, it then flapped its wings a few time and managed to haul itself onto the far bank. 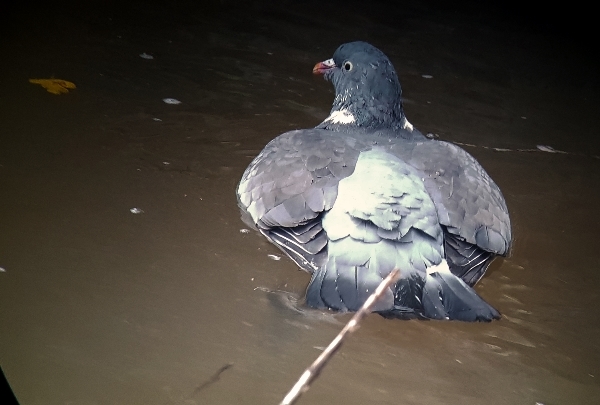 a Wood Pigeon pretending to be a new species of Duck!!

Well I never, the pigeon could not climb the steep bank nor could I get anywhere near it to help, I just hoped that it gathered enough strength to eventually fly up the bank and to freedom.

I left the valley soon afterwards and got back home at 11am.

After lunch, well late afternoon at 2:30pm, Dawn and I drove the short distance to Melbury village and took the lane that leads up to Melbury House. It is more of a drive that just a lane, imagine having a drive that is 1 ½ miles long! The 15,000 acres surrounding Melbury House are a bit monocultured with just grass, however, the magnificent trees and a few grazing meadows make the walk much more enjoyable.

looking up towards Melbury House

We saw lots of birds in flight and many around the arboretum near the house. Mistle Thrushes, Redwings, Fieldfares and Jackdaws flitted about in the mature tree tops whilst the meadows held Meadow Pipits and Pied Wagtails.

the view back down the track from Melbury House, this is just a tiny part of the 15,000 acre grounds

The light was pretty grim by now, very dull and around 4pm it started to get dark, by that time we were standing near the house and a large array of exotic firs and deciduous trees. A gathering of Goldfinches and Chaffinches was happening in the tree-tops and far below them a huge mixed flock was flitting about. We saw Blue, Great, Coal and Long-tailed Tits, Goldcrests (6) and Nuthatches.

As we walked back down to the car we saw a couple of huge flocks of Wood Pigeons with 50+ birds in each and a corvid flock of well over 100 birds, a single Cormorant was our last sighting.