DAY OUT AT WEYMOUTH AND PORTLND

WEATHER: a bright start to the morning, cloudy later with light rain, no wind. Temp 12C

OK so we are not supposed to travel anywhere unless it is essential, for shopping or for work, well today I went to work in Weymouth and Portland! Birding is my full-time profession, I had to recce the Portland area for future trips and to keep my site knowledge up-to-date and my bird finding skills needed to be honed, so I went to work.

I clocked in at 8:30am at Weymouth Sailing Club, which is on the northern shore of Portland Harbour and it is where I stood in the car park and scanned the Harbour.

It seemed quite desolate, the only activity in the water was two young ladies going for a swim!! I started picking out black dots on the water finding 4 Great Crested Grebes two Great Northern Divers and seven Black-necked Grebes, you can see from the photographs below that these birds were far, far away. 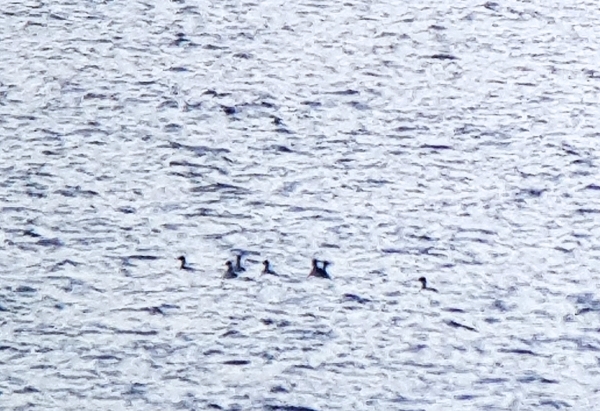 A large movement of Mediterranean Gulls from the Weymouth area across the harbour to Ferrybridge was going on all the time I was there, I picked out Black-headed, Herring and Great Black-backed Gull too. Cormorants and the smaller Shag were both seen fishing in the harbour at various locations.

I made a very short stop at Ferrybridge to scan the mudflats for waders and gulls, I saw a Little Egret in the channel, three Bar-tailed Godwits and a couple of hundred Mediterranean Gulls along the shoreline. 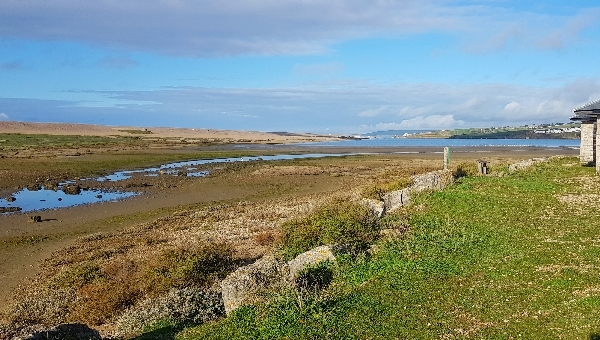 Ferrybridge, the channel on the left has a Little Egret in it, can you see the bird?

My next stop was at Portland Castle which faces the harbour from the south, now I had the sunlight more or less behind me which allowed me to scan the harbour much more efficiently. I counted seven more Great Northern Divers, five of which were in close proximity to one another but still quite far from me. 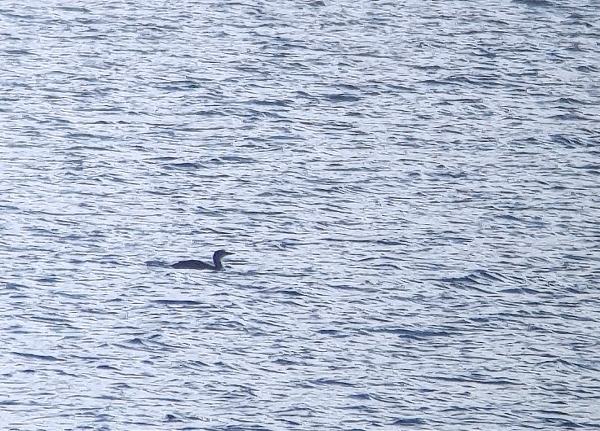 A small flotilla of eight Red-breasted Mergansers and then another two G N Divers could be seen near the eastern edge of the harbour. 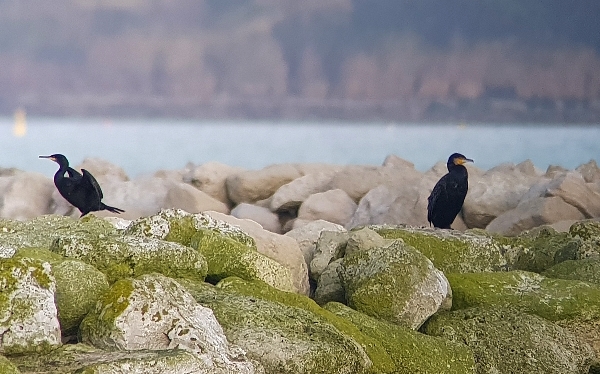 Cormorant and Shag, can you see which is which?

A Grey Heron sat with a mixed bunch of Cormorants and Shags and a single Oystercatcher flew across the harbour. Before I left I photographed a Common Kestrel hovering over the grassy bank near the Yachting Academy.

I drove onto Portland and headed straight to the woodland found along the side of the privately owned Pennsylvania Castle, the track through the woods leads down to Church Ope Cove. My main target bird was a PALLAS’S WARBLER which had been seen there yesterday along with Firecrest and yellow-browed Warbler. Guess how many of those three little gems did I see???  None….correct! I did find Guy Campbell down there and few other birders with about 20-30 Goldcrests, lots of Blue and Great Tits, Robins, Chaffinches, Dunnocks and Wood Pigeons. A large female Sparrowhawk drifted over too.

Guy and I drove separately to Western to look for a juvenile Rose-coloured Starling and again we dipped, plenty of Common Starlings were about but no sandy coloured ones I’m afraid. Next we drove to the Portland Bill area and walked down through the ‘hut fields’ to the Bill. In the hut fields we found not one, but four Black Redstarts, they were all first year female types and we also scanned the upper fields finding Stonechat, Linnet, Magpie, Skylark, Meadow Pipit and a Common Buzzard. 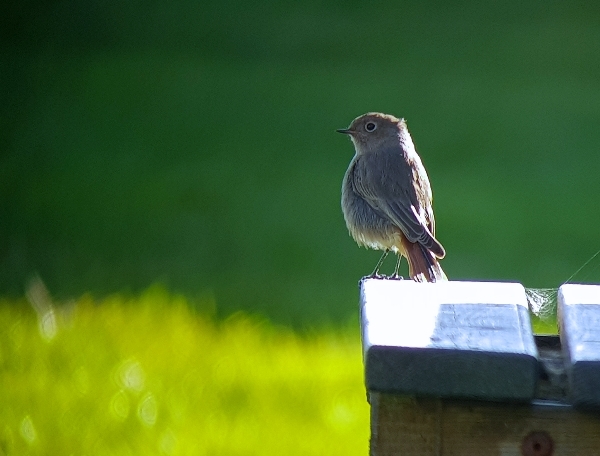 two of the four Black Redstarts, they are delightful little birds 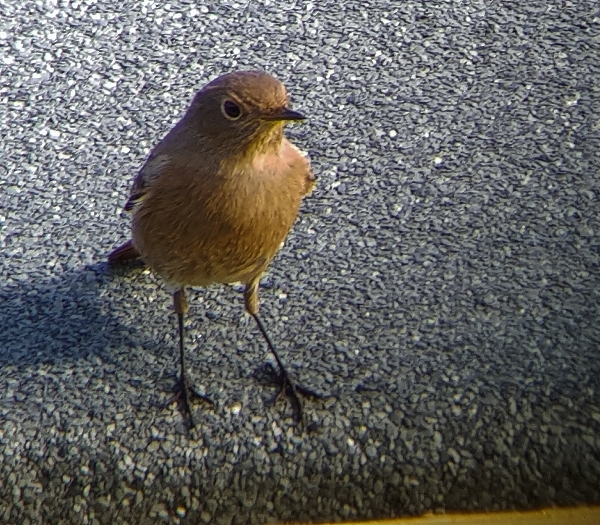 We searched the rocky area around the bill for more Redstarts and for a recently reported Snow Bunting without success, neither did we see any of the wintering Purple Sandpipers along the shoreline.

We then sat on a bench and ate our respective picnic lunches, a few very tame Rock Pipits came begging for crumbs which we duly supplied. 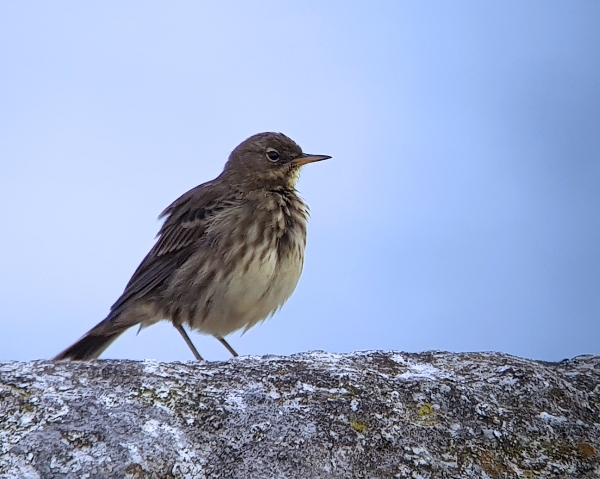 Rock Pipit on the wall that surrounds the Lighthouse

I scanned the sea during lunch and found Razorbills, Guillemots, Gannets and much closer to the shore Guy picked out two Common Scoters. After our picnic we ambled back to the car near the Bird Observatory at the Lower Lighthouse (which is closed during Lockdown). From there I went home and Guy drove to Weymouth to look for Grebes and Divers in the harbour. 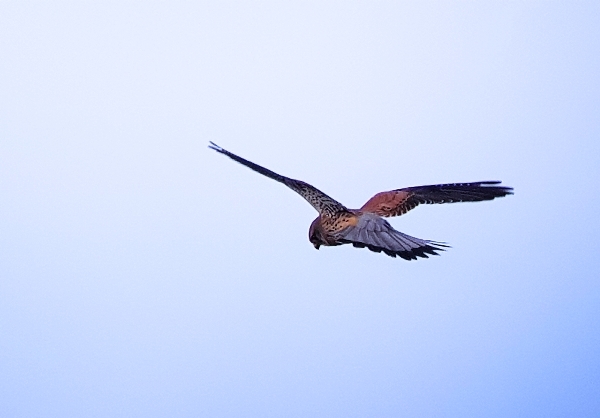 I was home by 3pm, Guy went on to find the seven Black-necked Grebes and two of the Great Northern Divers, it had been a lovely day out with a modicum of success.