Today I recorded the lowest number of species ever on my local patch but one of them was a mega patch tick!!!!

I am not surprised that the count was low considering the bad weather and the time of the year, but I did walk the entire circular route, taking 2 hours to walk 3 miles for  just 18 species.

From the entrance gate to the hawthorn hedge that divides the two meadows I saw 3 species, Crow, Jackdaw and Wood Pigeon. In the hawthron hedgerow I saw a single Redwing and as I walked along the stream through the second meadow to the river Yeo, two Cormorants flew over and a small flock of Siskins dashed from Alder to Alder. 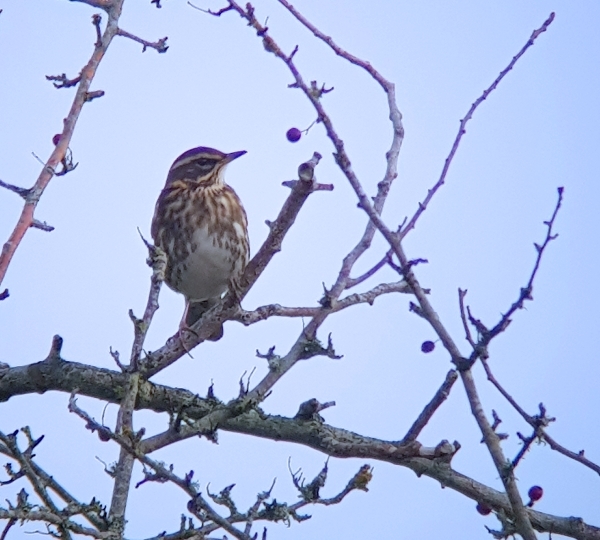 Redwing in the hawthron hedge

I then heard a Buzzard call and off to my left, high above the ridge, a raptor drifted north which I assumed to be the Buzzard. Then the Buzzard called again, hang on a minute, that call came from ahead of me and not to my left. By then the raptor in the sky had overtaken me and when I brought my bins up to look at it a Buzzard shot up out of the woods and started harassing it. I quickly got onto the bird and realised that I was looking at a female MARSH HARRIER, wow, this was my first Harrier of any description on my patch this year, a mega.

The harrier flew over the woodland beyond the river Yeo and headed eastward towards Bradford Abbas with the Buzzard trailing behind it, well, that cheered me up.

I stood for a while next to the River Yeo at the confluence with the stream and watched Blackbirds eating sloes and a Squirrel eating everything it could grab. A Goldcrest popped out of the thick scrub to say hello and a couple of Chaffinches flitted about in the blackthorn bushes.

I walked along the river to Rook’s Hill and I stopped at my usual place on the slope to look down at the river and the meadow beyond, I saw zilch!  The dead trees and the 'fence' were birdless and the river is still well up from normal levels.

Walking up and over the hill produced…….very little, except for a couple of Herring Gulls and lots of Wood Pigeons. I was glad to get back home where I saw just as many species in and around our garden as I had done over the last hour. Never mind, the Harrier made up for it and was my second ‘patch tick’ in two days, let’s see what tomorrow brings.

WEATHER: a little brighter than yesterday but not much, however, the wind had dropped away significantly.

I was more optimistic today, I could see tiny patches of blue in a very grey looking sky and the wind had gone. As I walked across the car park towards Station Lane a Collared Dove cooed, well that was the first for a long time.

A lot more birds were flitting about than there was yesterday, I walked along the track into the valley and recorded Robin, Wren, Blackbird, Jackdaw, Carrion Crow and a small party of Goldfinches. As I neared the derelict buildings I saw a raptor through the trees, it was flying fairly low across the crop fields heading south. I got my bins onto it and saw that it was a RED KITE!!! Well would you believe it, another November patch tick, that's three in three days, two of which were year ticks!! Amazing, it just goes to show that persistence pays off and you never know what is going to turn up. 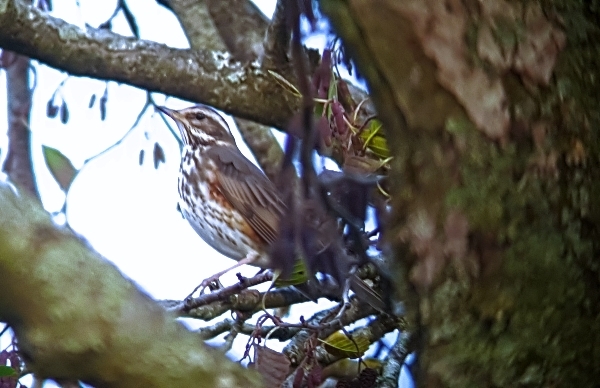 you may be getting a little fed up with Redwing Pictures but unfortuantely I am not seeing any other thrushes except for Balckbirds in the Valley just now!!

It also proves how rewarding this hobby can be, the Kite siting lifted my spirits and put a spring back into my step. I walked onto to the second meadow and found a flock of six Redwings in the hawthorn hedge and a large flock of Siskins (30+) in the Alders.

an unusual cloud formation over Rook's Hill, the picture was taken from the confluence of the stream and the River Yeo, you can see the hawthorn hedge that divides the two meadows

As usual I saw Pheasants and Partridges, a Common Buzzard, Rooks, Crows and Jackdaws, a single flyover Cormorant and many Black-headed and Herring Gulls. At the River Yeo I found two Goldcrests, Chaffinch, Blackbirds, more Redwings, Blue and Great Tits and the regular Squirrel.

taken from the top of Rook's Hill in the rain, the nearest building is where we live

My walk along the river and up the slope of Rook’s Hill produced nothing new, I walked quite fast because it grew very dark and I expected to get a soaking. As I topped the hill a Kestrel flew off out of one of the Oak trees, my third raptor, a regular ‘Raptor Fest’, don’t you know!!

It started to rain! I did get a soaking as I walked down the steep slope of the hill and back along the track to Station Lane.

When I got back home it had stopped raining. My bird feeders were busy again, I now have up to six Goldfinches visiting as well as two Nuthatches, two Coal Tits and innumerable Blue and Great Tits. Both Robin and Chaffinch have now mastered how to perched on my sunflower-heart dispenser and are using it regularly.

My heart goes out to Penny and John Hale as they received some devastating news yesterday, I shall always be thinking of you Penny as I take my morning walk.