WEATHER: a bright start, then low dull cloud darkened the day. Cold but no wind. Temp around 10C

I was quite optimistic when I looked out of the lounge window at 7:30am and saw a bright sky, high wispy white clouds prevented it from being a perfect dawn. I left the flat around 8am and headed straight round to the track into the valley, by the time I had reached it, low darker clouds were appearing from the south. 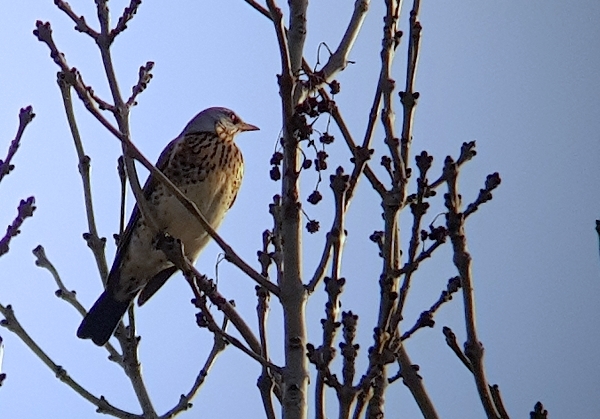 a Fieldfare catching the morning sun just before it disappeared - the sun that is.

I saw the usual crowd along the way, Wood Pigeon, Jackdaw, Carrion Crow, Magpie, Robin (singing) and Blue Tit. As I followed the meandering stream and its accompanying Alder Trees, I saw a Pied Wagtail and a small flock of Goldfinches.

Near the footbridge over the stream I saw a KINGFISHER. I must point out that I haven’t seen one on my patch since the beginning of October. I believe that the water level has been too high and prevented this azure-coloured gem from finding any food, despite the literature telling us that Kingfishers usually stake-out and stay on their territories from September, this is not true on small streams like this. It is impossible for them to find fish when the water level is 2-3 meters above normal.

Anyway, today the water level on the stream was back to normal and the bird had returned. The Kingfisher saw me and flew just a few meters ahead where it perched facing me, I tried to slip the scope from my shoulder, but……., well, you know the rest of the story, off went the little beauty. Well, a new bird for November wasn’t too bad, and such a star at that. 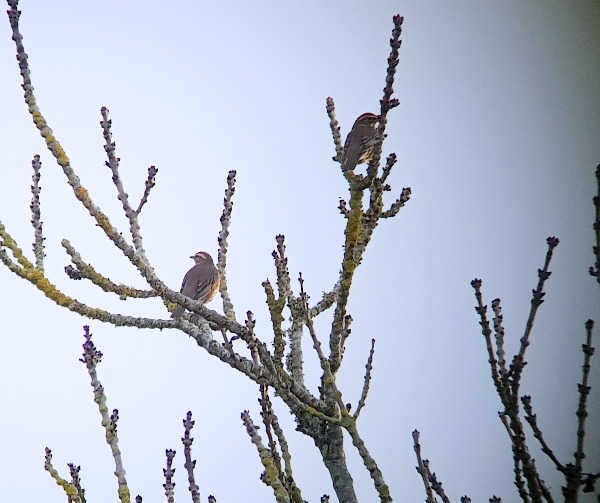 a couple of Redwings

My next encounter was with a Common Kestrel, the usual female flew up from the crop field behind the stream and I saw that she was carrying what looked like a small snake!! She perched in one of the large ash trees up ahead but was chased off by half a dozen Crows, this was fortunate for me because she flew much nearer and perched. In the scope I could see that she had, in fact, caught a worm, wow!! What a great bird of prey, catching a worm!

the Kestrel sitting on the far side of the trees, unfortunately you cannot see its prey - a worm!

I carried on down through the second meadow to the River Yeo, along the way I saw a couple Redwings, a flock of 21 Fieldfares, lots of Wood Pigeons, a Great Spotted Woodpecker and I heard a distant Raven. I spent a few minutes at the confluence of the stream and the river where I watched Blackbirds, Redwings, Chaffinches and a Buzzard. A noisy mixed flock moved from the river to the stream, they all flew behind me cutting the corner where I was standing. I walked back and logged Long-tailed Tit, Coal, Blue and Great Tits and that was all. 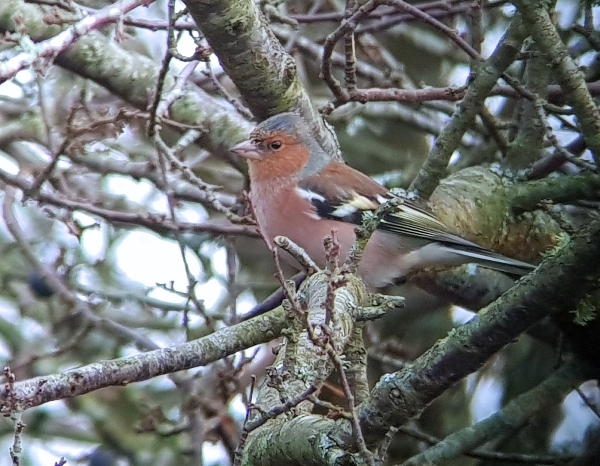 one of our most beautiful 'common' birds, the Chaffinch

The walk from the meadow to Rook’s Hill produced perched Redwings and Fieldfares but not many all the rest of my sightings were fly-overs. A single Great Cormorant came from the north, then an explosion of corvids came from the east, I counted 77 birds, ninety percent were Jackdaws and the rest were Rooks. More Fieldfares flew over with four Stock Doves and lots of Wood Pigeons.

I never stopped for long on the slope up the hill because it was deserted, I walked up and over the hill not stopping again until I got home. There was nothing new to report from the feeders, all the usual birds were there. My exercise walk through the village added Starling and House Sparrow to the list.