WEATHER: dull and overcast for most of the day, raining most of the time. Brighter later and a clear sky at dusk. Temp 10C

I only stepped outside of the flat in the morning to top up the bird feeders, it was raining heavily first thing but it stopped around 1pm. I watched the feeders for a while and I saw a few birds in the meadow, I think my list was 13 species:  Blue, Great and Coal Tits, Nuthatch, Goldfinch, Robin, Blackbird, Great Spotted Woodpecker, Pheasant, Crow, Jackdaw, Wood Pigeon and Magpie.

Late afternoon the sky cleared completely so I decided to dash over to Sutton Bingham to look at the pre-roost gathering of the gulls. It was manic out there, I estimated that a couple of thousand gulls were present, I counted 1500 Black-headed Gulls when I first arrived at 4pm. More gulls kept on arriving and I kept on sifting through them looking for that elusive rare species. 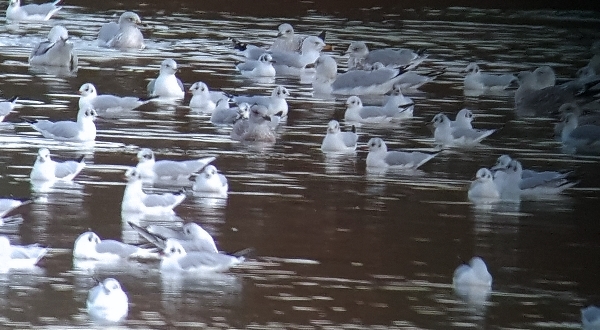 There is one adult Med Gull in this picture - can you pick it out? 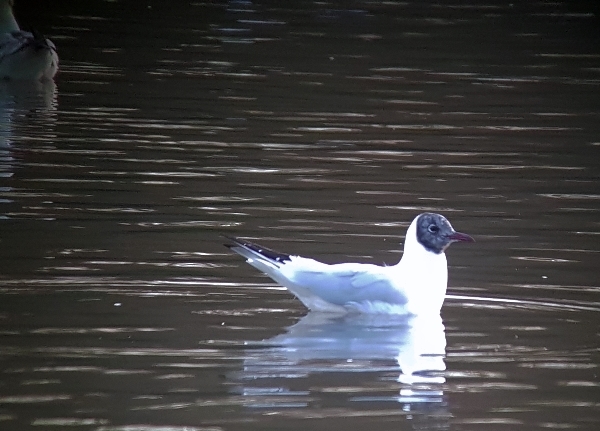 I saw two Black-headed Gulls moulting into their summer plumage

The best I could come up with was 3 Mediterranean Gulls and 2 Common Gulls all the rest were Herring Gulls, B H Gulls and L BB Gulls, If there was a rare gull there then I missed it.  Boy was it cold out there, I wonder why Dawn didn't want come out with me?

Moonlight over the reservoir looking east from the causeway

the colours of the sunset reflected from the West Pool

Other species noted were Wigeon, I counted 52 of those, Canada Goose, Moorhen, Great Crested Grebe and Mallard made up the rest of my sightings. I stayed until almost dark, there was a fantastic, colourful sunset, just before it got really dark all the gulls moved over to the dam area and still large groups were arriving as I left.  I'm pretty sure we are in for a heavy frost tonight.