WEATHER: dull, grey, overcast with rain in the afternoon. No wind. Temp 10C

It is always going to be a bit of an anti-climax whatever I did today after such a smashing day yesterday. The weather was just great yesterday with superb light and today it was dull and grey all day. I guess you get to appreciate the good days when you have dull episodes like this one.

I dragged myself out of the door around 9am, it still seemed dark, cars were passing with their headlights on!! I soon cheered up when I started listing new birds for my December list. I started with Collared Dove, I know it is ‘trash’ bird for some, but for me it is a good find for my patch, we only have three pairs that I know off in the village.

a picture of a Jay is a rare occurrence for me

Once I was on the farm track into the Valley I found a Jay in the first oak tree and a small party of Red-legged Partridges flew off the slope of Rook’s Hill and landed in the cultivated field beyond the stream. The alders were quiet except for one or Redwings and a Mistle Thrush which flew up the valley towards and over the alders. 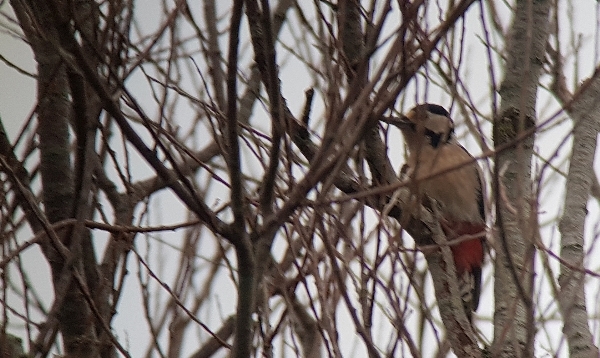 this Great Spotted Woodpecker tried to hide behind the twigs

I walked for a mile but I didn’t make it to the River Yeo, at the hawthorn hedgerow I watched a few more Redwings and a single Fieldfare that appeared to be defended a hawthorn bush from marauding Blackbirds and Redwings. I turned around at that point and headed back, it had gone really dark by then. 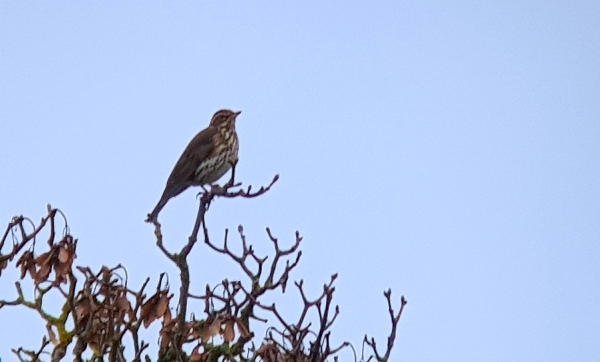 here is the daily Redwing shot for you obessives!

More birds appeared on the return journey, after sifting through a few Chaffinches (looking for a stray Brambling) I followed a mixed flock of Long-tailed Tits & Blue Tits and whilst doing so I found a small number of Siskins and a few Goldfinches in the same tree. Then a Treecreeper appeared and a pair of Great Spotted Woodpeckers flew into the top of a nearby ash tree. I nearly trod on a Pheasant in the longer grass next to the stream, it ran off in front of me instead of scaring the living daylights out of me by flying up and screaming.

and here is the usual poor Siskin shot

I saw the Jay once again as I walked out of the valley and that was my last sighting of my walk. The garden feeders were busy as usual, Nuthatches and Goldfinches joined Blue, Great and Coal Tits.