Boy was it miserable out there today, but I needed to get out after staying in for the last two mornings. I wrapped up warm and wind-proofed and set off for a walk into Yeo Valley. My first encounter involved a small flock of Siskin but they flew off before I could get a picture.

I followed the meandering route of the stream looking for anything that had braved the weather conditions. I then spotted a small bird of prey flying towards me on the other side of the stream, it was small and grey!! I moved a little closer to get a view of it, I thought it was too small for a Sparrowhawk and then I saw that it was a LITTLE OWL!!! A PATCH MEGA!! Never seen one along here before! The Owl flew further down the stream before I got it in the scope and then I lost it.

Well, that was my reward for going out in the rain, I was high as kite by now. The next bird I looked was a Raven, it was calling from the dead tree on top of Rook’s Hill, I took a few pictures of it because a Jackdaw sat next to it and I wanted to show you the difference in their sizes. 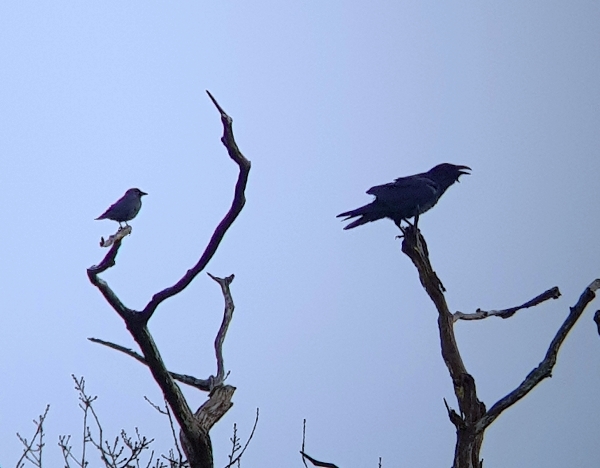 A Jackdaw and a Raven - record shot from a great distance

Other than that I didn’t see much else, I walked the entire length of the two meadows, following the River Yeo to the slope at the northern end of Rook’s Hill. It was very windy as I walked up the hill, the rain was beating down from behind me. I stopped to watch a flock of Redwings fly down the valley and I watched a large mixed flock of Rooks and Jackdaws in the cultivated fields over and beyond the stream.

Walking down the steep side of the hill I saw three Jays flying from the oaks to the alders, I was too wet by now to stop and try to photograph them. 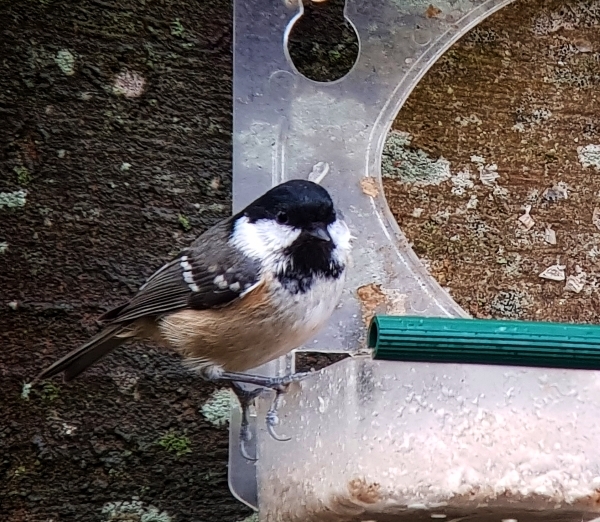 Coal Tit in my garden

Back at home I watched the feeders for a while from the garden path, a Great Spotted Woodpecker came to visit but flew off once it saw me and a Green Woodpecker flew across the meadow. The usual Nuthatches, Blue, Great & Coal Tits joined Goldfinches, Robin and Chaffinches at the feeders.