WEATHER: a lovely cold, crisp day, with plenty of sunshine and a light breeze. Temp 4-6C

Dawn and I decided to visit the coast for our exercise walk today, we drove to Weymouth and walked the 3 miles to Ferrybridge via the Rodwell Trail. It was a lovely morning with high cloud and plenty of blue sky, it was cold but we dressed for that.

We parked the car near central Weymouth and got onto the Rodwell Trail at the beginning near Radipole Lake, the trail is in fact an old railway track that used to run all the way to Eastern on Portland. It was quite busy with walkers, cyclists and joggers but we had a lovely time making our way free of road traffic all the way to Ferrybridge.

Our timing was perfect, we arrived at 10am just as the tide was turning, I carried my scope so that we could stop along the way to scan the harbour where all three diver species and three grebe species had been seen recently.

The first stop we made was at Sandsfoot Castle, you can walk around the castle grounds to overlook Portland Harbour from about 20 meters above the water. I got onto a few Great Crested Grebes before finding a RED-NECKED GREBE! This little beauty was quite far out so my photographs were just record shots really. 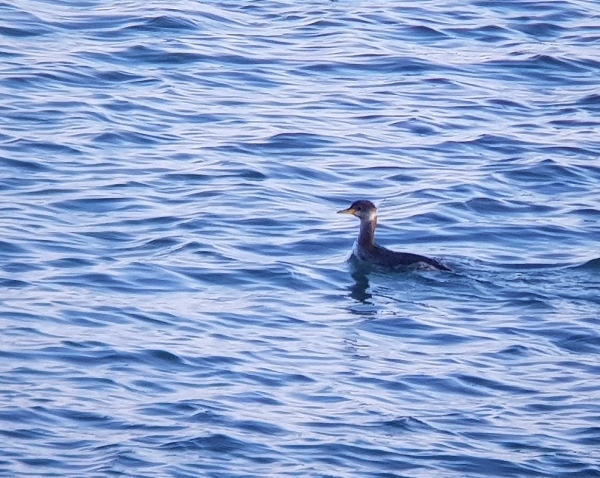 I watched a mixed group of Shags and Cormorants as they chased a shoal fish followed by a group of marauding Black-headed Gulls. Back on the trail we watched several common garden species before making our second stop near the Weymouth Sailing Club. I searched for a group of Black-necked Grebes which can usually be seen from this position, but I failed to find them. I did see a very distant Great Northern Diver and about 20 very distant Red-breasted Mergansers. 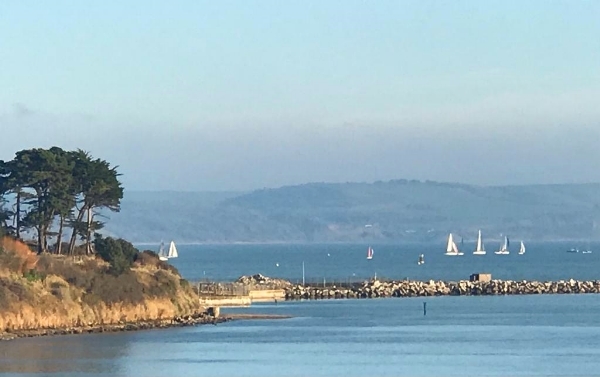 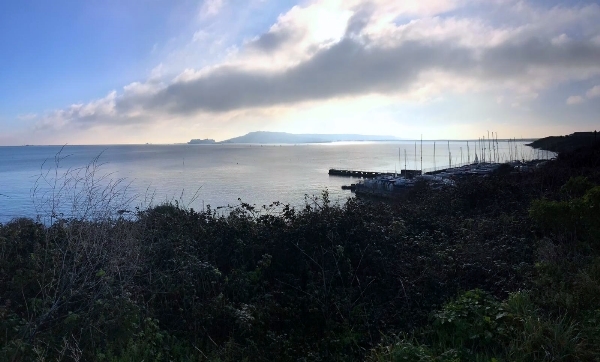 Not too far further along the trail there is a good vantage point where I, once again, set up the scope for another scan of the harbour. Wow! I quickly found a group of four divers and they were swimming towards me!! They got fairly close and I could easily see that there were two each of Great Northern and Black-throated. Amazing, I shot off as many pics as I could. Then another diver appeared, it was a third Great Northern Diver and they gathered all together, do you know what the collective noun is for a group of divers???  Nor do I!!  But a very apt suggestion would be a ‘bubble’ of divers as is used for scuba divers.

I watched the gang of five for a while, Dawn got cold so we moved on. Another stop near the Ferrybridge pub finally produced the Black-necked Grebes, they were very distant. At that point we also saw a Kingfisher in flight, a lot more Red-breasted Mergansers and small group of Brent Geese.

We crossed the main road to look over Ferrybridge and the Fleet, the tide was now turning and mud was appearing around the edges where more and more gulls and Brent Geese were gathering. By the time we reached the Café at Ferrybridge visitor’s centre it was lunch time, we grabbed a table next to the large picture window where we could scan the mudflats whilst eating our brie, bacon and cranberry panini’s.

Mediterranean Gull taken from the cafe through the glass window!

Three Dunlin appeared, then three Bar-tailed Godwits and a single Oystercatcher flew in. The gull numbers were quite low a dozen or so of Mediterranean Gulls joined Herring, Black-headed and a single Great Black-backed Gull. I also picked out two roosting adult Kittiwakes and in the distance I could see dozens of Dunlin and Ringed Plovers roosting on the pebbles of Chesil Bank. 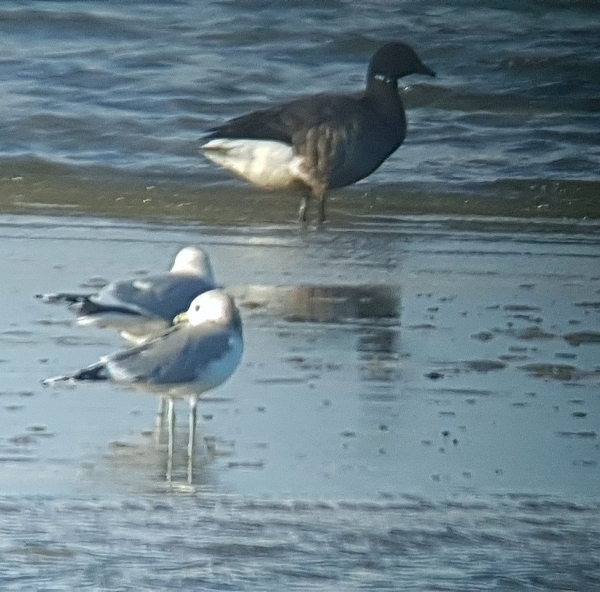 More and more Geese arrived and despite scanning through them carefully I couldn’t find a ‘Pale-bellied or a Black Brant. We finished our meal and drank some delicious beverages, the coffee they serve at the café is exquisite. 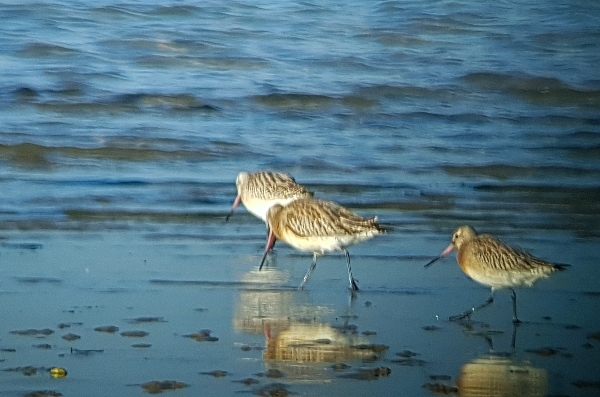 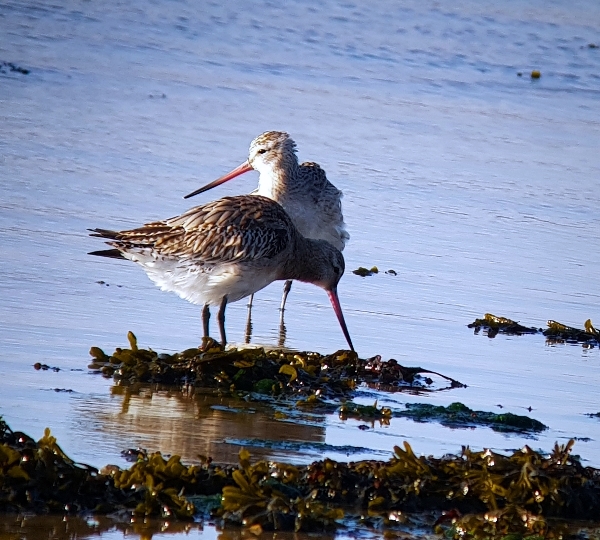 Our journey back was just as eventful, we got fairly close to the Godwits and we found some Turnstones. Once we had crossed the road to view the harbour we soon realised that the tide had gone quite low and the birds were further away, however, we did find that the Black-necked Grebes were much closer and in better light, I tried a few record shots. 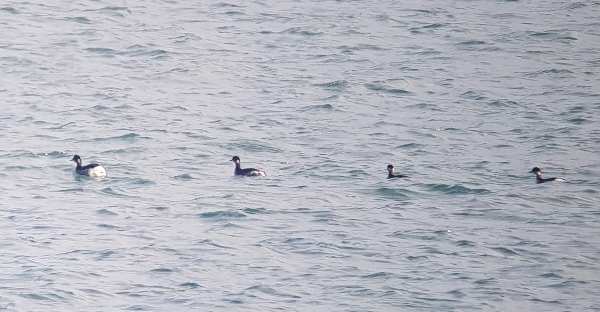 you can just make out that they are Black-necked Grebes

Brents on the Fleet at Ferrybridge 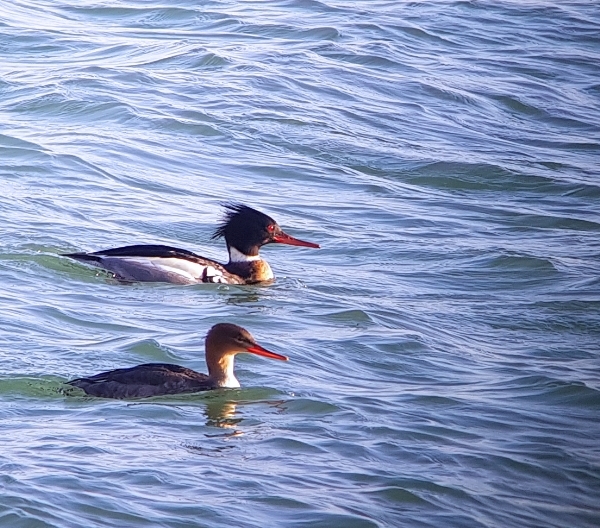 a pair of Red-breasted Mergansers

We found a pair of Common Stonechats along the Rodwell Trail and a group of Mergansers fishing very close to the shore, you could watch them actually chasing fish! The walk back seemed much quicker, we got back to the car around 2:30pm and we were back home 40 minutes later. It had been a great 6 mile walk with some great birding and a lovely lunch thrown in.