After staying in for two days I was itching get out today, I had arranged to meet my good pal Nigel at Steart WWT at 8am so I got up and set out at 7am in the dark.  I was late of course, but didn’t miss much, there was a glorious sunrise over the reserve.

Our view from the main car park at Steart this morning

Over the last few days a small group of PENDULINE TITS had been feeding in the Reed Mace (often called bullrush by many) in an adjoining area called Stockland Marsh. We watched huge flocks of Lapwings dancing across the sky, put to flight by marauding raptors no doubt, there are Harriers, Peregrines, Kestrels, Sparrowhawks, Merlins and Buzzards always in the area during wintertime.

The walk to Stockland Marsh from the car park was horrendous, ankle deep mud with very sogging grass verges and often deep puddles lined the path, the mud was very sticky and clingy and made for a difficult walk. The site where the Pendulines had been seen was a mile from the car park!!

We saw plenty of species along the way, Linnets, Goldfinches, Reed Buntings, Redwings, Fieldfares, more Lapwings, Common Shelduck, Mallards, Gadwall and Common Snipe. We made it to a viewing platform and realised that the main area of Reed mace was off to our right where a couple of other people with cameras seemed to be concentrating on one small area of reeds. 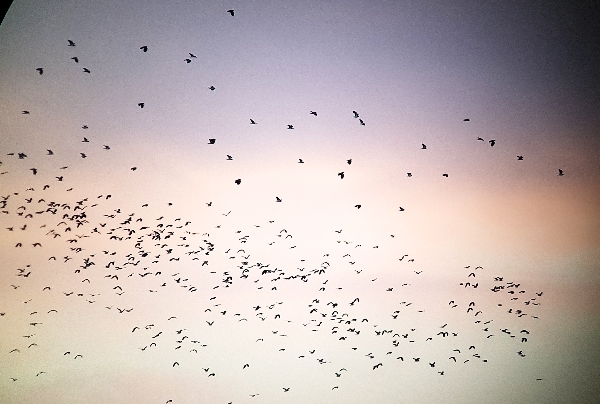 clouds of Lapwings over the marshes this morning

A quick walk around the muddy track got us to the cameramen, one of them said he had seen 3 Penduline Tits early but they had been photographing Bearded Tits just now. None of the birds were showing at the moment!!

Nigel and I spent the next 3 hours watching and waiting along a 100 meter section of the reeds, other birders came and went, but none of us saw a Penduline Tit. We had a few false alarms, Penduline Tits have a habit of pulling the Reed Mace apart and the fluffy seed heads disperse in the wind, when you seen floating fluff coming from the reeds you know you may have a Penduline Tit nearby. This happened three times for me and each time I found a bird pulling the reed-head apart it was a blooming BLUE TIT. Humbug!! 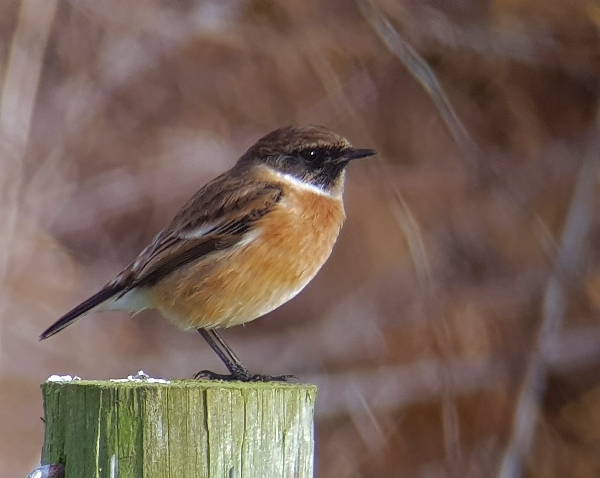 The light remained pretty good throughout our stay and we enjoyed sightings of other species whilst we searched for the Pendulines, Nigel found three Bearded Tits, two of them were superb males, it was a fantastic sighting, but the birds flew off before we trained our respective cameras onto them.

Later the breeze stopped completely, it warmed up and the reeds became more lively, we saw Cetti’s Warbler a few times, they had been calling all morning. Water Rails called all the time but never showed, Reed Buntings were flighty and several Common Chiffchaffs came up to the top of the reeds.

We saw a Kingfisher on a tree stump, some Common Snipe in the air and a Common Kestrel on a post, Nigel picked up a Marsh Harrier in the distance and groups of thrushes flew over. Around 11:30am we gave up on the Pendulines, we assumed that they had moved on to pastures new. 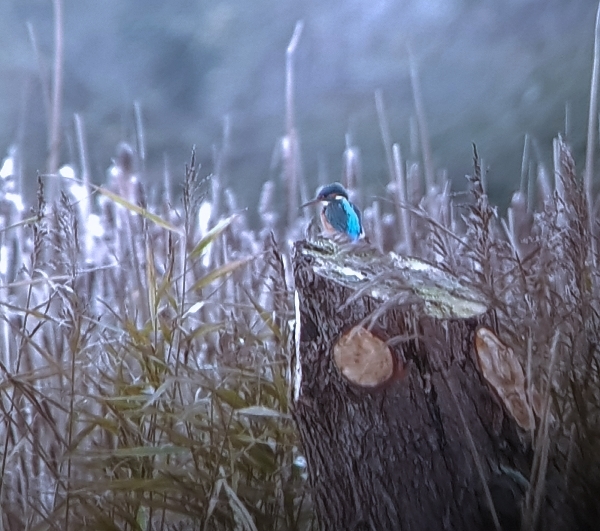 Nigel found this Kingfisher across the other side of the reeds

Back at the car park we drank a hot cuppa coffee and ate our picnic lunches whilst huge flocks of Lapwings and Starlings dashed over the marshes and very high up we saw about 200 Golden Plovers. We picked out a Peregrine on a pylon and a Buzzard on a distant fencepost.

We never visited the main hides, we stayed Covid-savvy as the car park was full and hides were likely to be crowded. We drove further towards Steart Point and parked  in a small car park near a raised embankment where an EASTERN YELLOW WAGTAIL had been frequenting for the last week or two. We soon learnt from other birders that the Wagtail was about ½ mile along the track near a dung heap, so off we went.

the dung heap where the Wagtail is often seen

We noted a dozen or more Curlews in a meadows, a couple of Little Grebes on a pool and Nigel saw Coot whilst I saw Teal and lots more Lapwings. We spent from 1pm to 3pm at the dung heap, how nice, where a surprising number of species were seen. Nigel had fallen behind me, he was testing out his camera, when I arrived at the dung heap the Wagtail was showing, I snapped off a few record digi-pictures. By the time Nigel arrived it had flown off. We were reassured by other birders that the bird often returns after a short while, so we dug in. 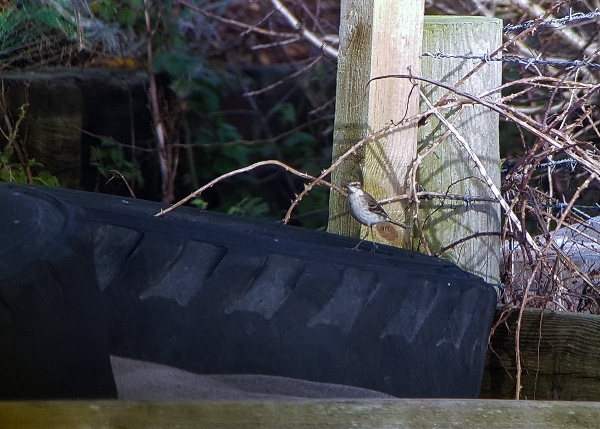 this is the best I could do before the bird flew off. 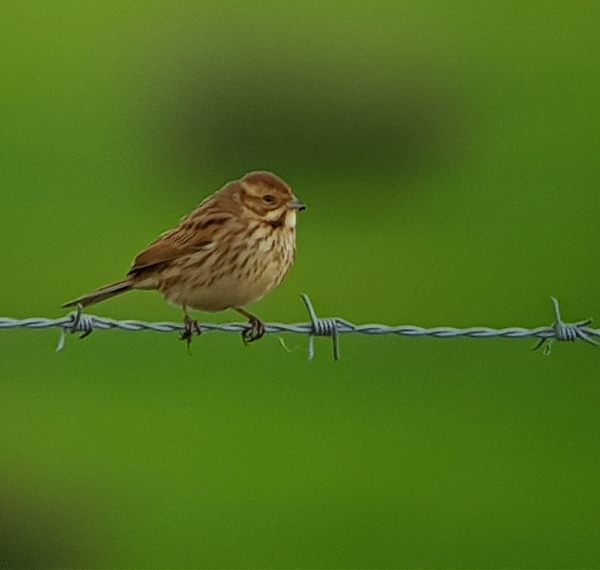 We spent about 90 minutes waiting on the Wagtail’s return which never happened!! In the meantime Nigel, bless him, walked back to our cars and drove his down to the dung heap so we didn’t have to walk back later, what a great guy he is!

During our ‘dung-heap vigil’ we listed 17 species on or just around the pile of spoil: 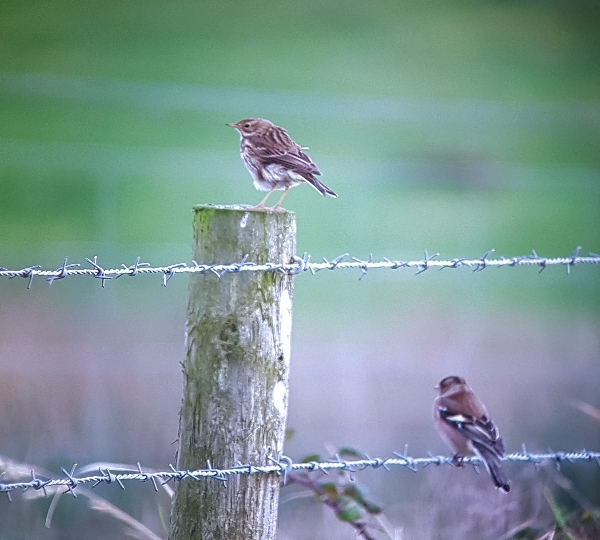 a Meadow Pipit and a Chaffinch

We also saw a female (Ringtail) Hen Harrier a couple of times, it was flying over the meadow behind the heap and we saw a Merlin sitting on a distance post behind some bushes. Our time was running out, dark clouds were approaching, the light was fading, Nigel was dipping the Wagtail, he didn’t seem to mind and was happy with what we had found. We both agreed (for a change) that our bird of the day was the stunning male Bearded Tits, what shame we never got them in the can!!