MORNING WALK INTO THE FLOODED YEO VALLEY, AFTERNOON AT CORSCOMBE

After 24 hours of persistent rain I was not surprised to see the stream in flood! The meadow outside our garden had large pools of water and the meadows in Yeo Valley were underwater in many areas. Nevertheless, I still managed to get round the usual circuit albeit my walk was somewhat foreshortened.

as I walked along the track into the valley I could see that the water level was up by about 3 meters!! I saw three thrushes flying towards me, they landed in the big oak on the side of  Rook’s Hill, in the scope I could see that they were as suspected, Mistle Thrushes. A Crow sat in the same tree and looked very reluctant to fly off as I approached, so I clicked that too! 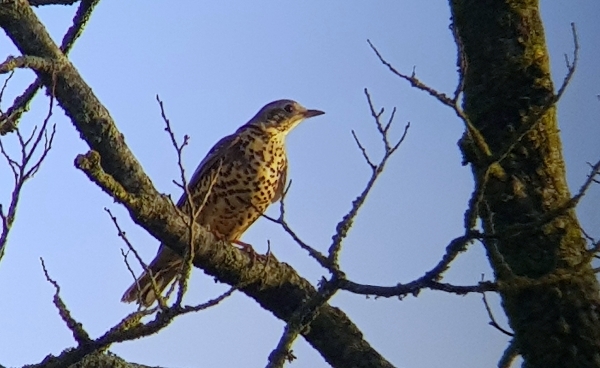 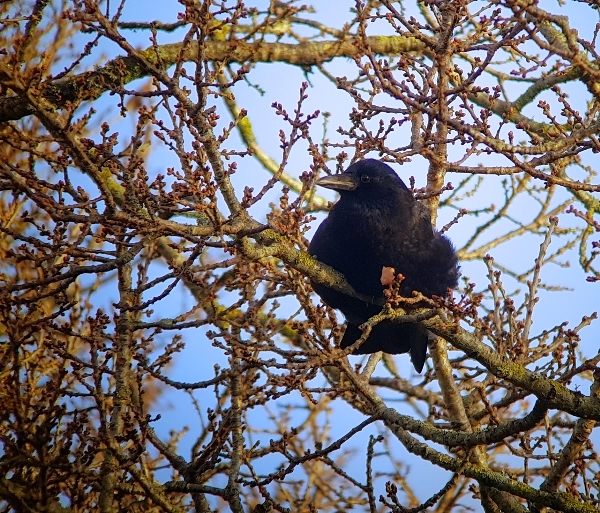 There were many corvids flying too and fro across the valley, lots of Rooks, Jackdaws, Crows and a single Raven were noted. A Grey Heron flew off from near the stream and I saw a party of 10+ Red-legged Partridges running along the far bank of the stream. Other than that there were very few other sightings, a flock of 13 Mallards went over and a single Cormorant flew eastward and Herring Gulls came over in ones or twos.

the flooded stream - my wildlife camera is strapped to one of those trees, under water of course!

I followed the course of the stream which had burst its banks in several places, I kept well away from the swirling rapids of the stream as it rushed down the valley to meet the river Yeo. A flock of Siskins flew along the top of the Alder Trees but they never stopped, likewise with a pair of Chaffinches. 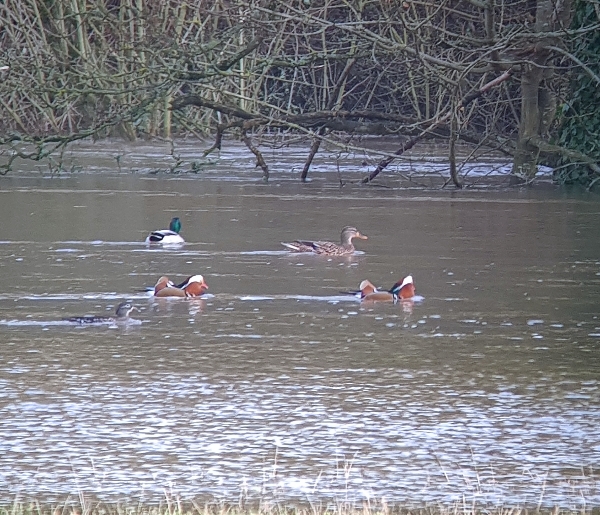 The bottom of the valley where the stream met the River Yeo was a complete mess, a huge amount of water was sitting in the meadow, it was like a mini-lake, four Mallards and two pairs of Mandarin Ducks were sitting at the confluence of the stream and the river. They flew off when they saw me.

I walked across the second meadow to the slope of Rook’s Hill, at one point a huge amount of flotsam sat on the surface of the river, a Grey Wagtail was treading carefully across the ‘island’ of wood and plastic. It flew off before I could get a decent shot. I did notice how many insects had crawled onto the wood to escape the flood. Many Alder Beetles were sitting with Ladybirds, slugs and snails, a bonanza for the Wagtail.

Walking up and over Rook’s Hill produced a Buzzard sighting, a raven and a Steam Engine, the Yeovil steam club had an open day and were running a Santa Special Steam Engine Ride for local children, Santa was driving the engine.

In the afternoon Dawn and I visited her sister Celia who was ‘House-sitting’ in Corscombe, I walked around the grounds and saw a Kingfisher, a flock of Goldfinches and a small number of species was visiting the feeders. Very similar species came to feed as do to my feeders. I saw Gt Spotted Woodpecker, Nuthatch, Coal, Blue & Great Tits and House Sparrows. 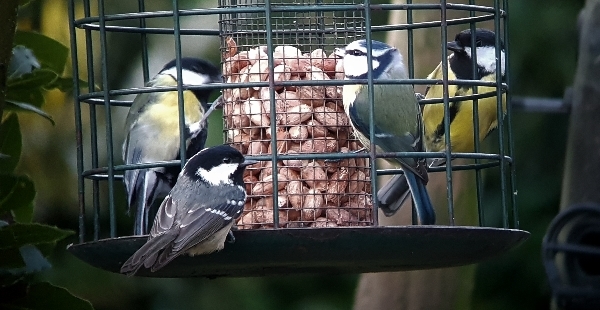 One species was different to mine and that was Dunnock, here they feed on peanuts just like Blue Tits do, its amazing to see.