WEATHER; some bright spells to start the day, then overcast and rain. Very cold 3-4C

Dawn and I set out to try to find Silverlake which is just outside of Dorchester on the eastern side. It is not marked on any maps and reports of some good birds have come from there recently, alas, the directions and /or location were not forth-coming. I knew roughly where abouts to go so it was a case of ‘suck it and see’.

We left home at 9:30am and drove to Dorchester then we went east towards West Knighton and then turned onto the road towards Crossways, we stopped near some obvious gravel pits and took a public path into and across the working pits. It was obviously the wrong place, it was a working sand and gravel extraction area with conveyor belts and very restricted access. We scanned a couple of pools and only saw Mallard and Tufted Duck, however the hedgerows held a few nice species. We saw a couple of Bullfinches, some Reed Buntings, a flock of Chaffinches and some common species such as Song Thrush, Blue & Great Tits, Blackbird, Dunnock etc.

After a ‘WhatsApp’ exchange with Pete Coe, a friend from Portland, I finally got the correct directions, he also gave me directions to a field where 16 White-fronted Geese were being curently watched by two of his friends. We arrived at the goose location, Dawn stayed in the car (she had had enough of walking in the cold already) so I walked for about 1km before I saw three birders walking towards me, they had been watching the geese, but the geese had been flushed by a dog walker. They suggested I tried Silverlake and gave me good directions of how to get there.

Silverlake - the 16 White-fronted Geese were roosting very near to the pylon on the distance!!!

Ten minutes later I was scoping the huge area called Silverlake from a vantage point at the top of the main track. The whole area has been landscaped and fenced off by the current owners, a development company, who took over the land once the excavational company had extracted all the sand and gravel. A nice walkable pathway divides the huge lake which was covered in ducks and geese, the fence keeps all dogs away from the water so  that the birds are not disturbed.

I picked out the 16 White-fronted Geese which were asleep on the far shoreline and were about as far away from me as they could possibly be!! I also picked out the Long-tailed Duck which was one of the main reasons I wanted to find this lake. 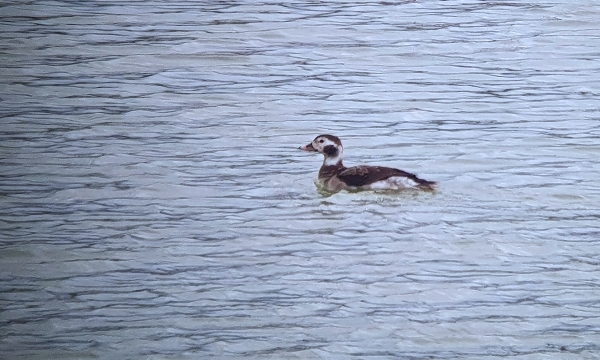 the Long-tailed Duck at Silverlake 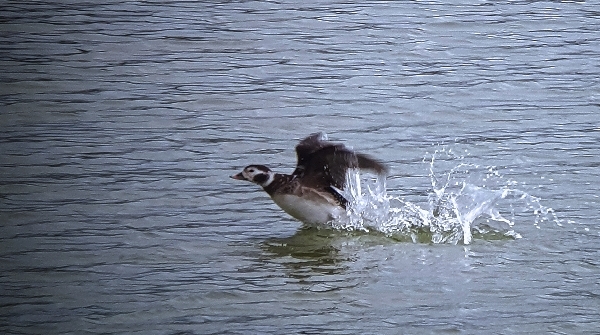 Many other species were roosting or feeding on and around the lake, Canada Geese, two pair of EGYPTIAN GEESE, this introduced species is now spreading into the southwest. Also many Wigeons, Teals, Shovelers, Mallards, Gadwalls, Coots and a few Tufted Ducks. My other target species was Goosander, I couldn’t pick out any but it was a huge lake with islands and coves, the Goosander could have been anywhere.

We left after a short while and headed straight for home, I saw a large flock of Lapwings near Dorchester, some Mute Swans in a flooded field and large numbers of Rooks and Jackdaws along the way.

Whilst I never went out on any birding trips over the Christmas period, I did go for walks with Dawn and her sister Celia. We went across to Barwick House to look at the lake one day, I walked into Stoford and along the stream one morning and with Celia we went into Beaminster and took a lovely walk along the River Brit to Netherbury. We made a plan to return in the spring it was a such a beautiful walk.

the huge Spruce Tree in the churchyard at Netherbury

The sunrise on Christmas Morning was absolutely stunning, it makes it easier to forget the troubles of the world when you see natural phenomena like that. The sunset on the 27th was also a very colourful affair.

sunset in Barwick Park, you can see the top of the needle-shaped Rose or Messiter's Folly

Fish Tower another of Barwick Follies

looking south-east from the top of Barwick Park - the Folly called 'Jack the Treacle Eater' can be seen.