WEATHER: We had thick freezing fog for most of the morning. Light snow showers, sleet and rain later. Temp -4 to -1C

Well what a cold start to the year, I've never had ice form on my scope lens like it did today, amazing. Traditionally I would dash around one or two counties on this day to try to reach 100 species, however, the Covid Tier 4 Lockdown has put an end to any dashing about. So I concentrated on my local patch, which is anywhere within 3 miles of my home.

The almost frozen lake at Barwick

I saw almost 60 species in and around Stoford, a total which I found incredible and very pleasing considering the weather. I missed some locally common birds such as Linnet, Bullfinch, Grey Wagtail, Peregrine Falcon and Barn Owl.

I set off on foot at 8am into the freezing fog, I could hear plenty of birds but found it hard to see any, visibility was down to about 20 meters and very soon my hands were freezing and my lens were steamed up. I heard Rook, Jackdaw, Robin and Carrion Crow from my garden path and Jackdaw was my first actual sighting.

I headed to Barwick Gardens and Lake to start my birding and along the way I found Redwings, Blackbird, Robin, Wren and a Great Spotted Woodpecker. The lake at Barwick House was almost totally frozen over and all the ducks were tucked away at the sheltered end. I saw Mute Swan, Little Grebe, Mallard and a Kingfisher. 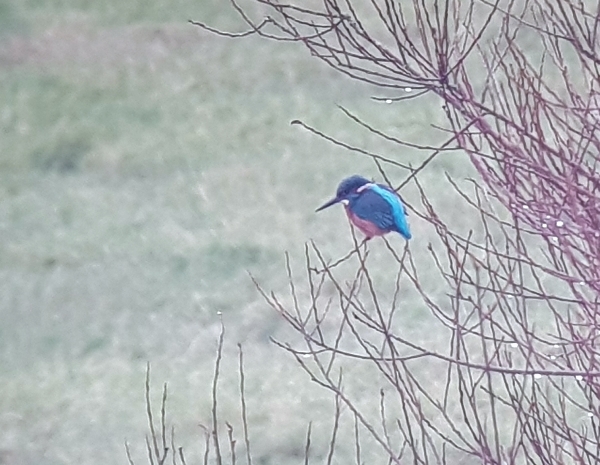 a record shot of the Kingfisher

A second Great Spotted Woodpecker started drumming, a Stock Dove sat in a tree calling, "whooo-look, whoooo-look" whilst a Green Woodpecker called as it flew across the manicured lawns.

I walked through the very pretty Barwick Village where I found a flock of Long-tailed Tits with Blue Tits and Great Tits at the far end of the village I took a path alongsdie the church and into a meadow where a small flock of Lapwing and a pair of Magpies were feeding.

I crossed the main A37 road and headed to Pavyotts Farm, in the fields around the farm I saw more Lapwings and added Stonechat, Meadow Pipit and Dunnock to the list. In recent days a large flock of Golden Plovers had been roosting in one of these fields, it was too foggy to see much but I couldn't find any.

Lapwings in the frost

I walked around the fields and added Reed Bunting, Chaffinch, Coal Tit and Goldfinch to the list. Then I bumped into Steve Chorely and together we searched a potato field together. In the filed was all five species of Thrushes, Song & Mistle Thrushes, Blackbird, Redwing and Fieldfare.

Fieldfare in the crab apple tree

In the same field we also found Reed Buntings, Chaffinches, Greenfinches, Goldfinches and a Raven flew over. From a gateway we search the 'Golden Plover' field a second time, the fog had lifted a little and we could see many more Lapwings, two Stonechats, lots of Pied Wagtails and a herd of cattle. Steve then got onto a Golden Plover, hooray! We found 6 or 7 of them and that was all, but it was enough.

We then parted company, I walked back home stopping to watch a very tame Redwing (you may have seen it on my blog from the other day) This bird refuses to fly away with all the other Redwings, so I canned it once more. I also photographed a Fieldafre in a crab-apple tree but ihe mist had descended once more. 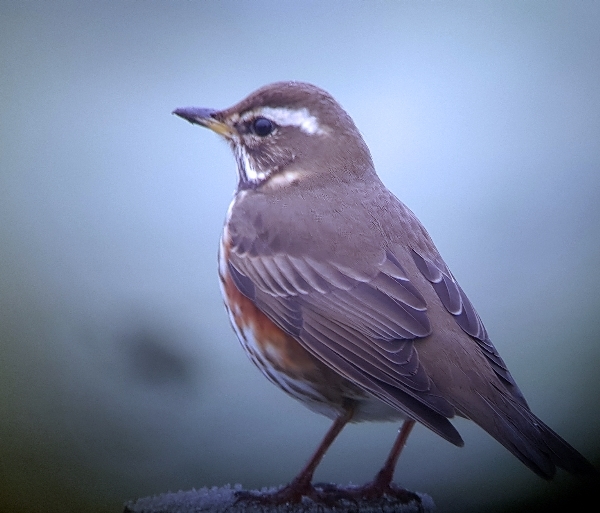 my daily picture of a Redwing

I got home shortly before 12 noon  and just time or a bowl of hot home-made soup which Dawn had just made, yummy. At 1:30pm I set out again on foot to walk into Yeo Valley to try to add more species to my current list of 43. First of all I walked south into the large grass meradows above the stream, there I saw 9 Buzzards on the grass and a Common Kestrel (one of my target birds), also on the grass was Redwings, Fieldfares and a single Mistle Thrush. 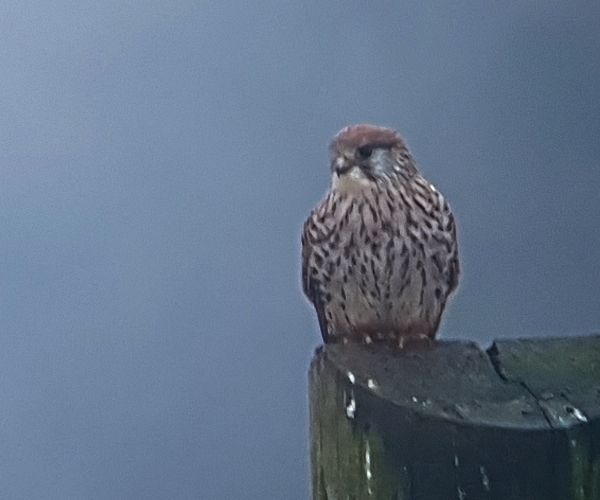 The riparian woodland along the stream held many birds, i found a huge mixed flock containing Blue, Great and Long-tailed Tits, there must have been over 20 Blue Tits in that flock!! A few Goldfinches were joinmed by one or two Siskin (another of my target birds) as they fed in the canopy of the alders. 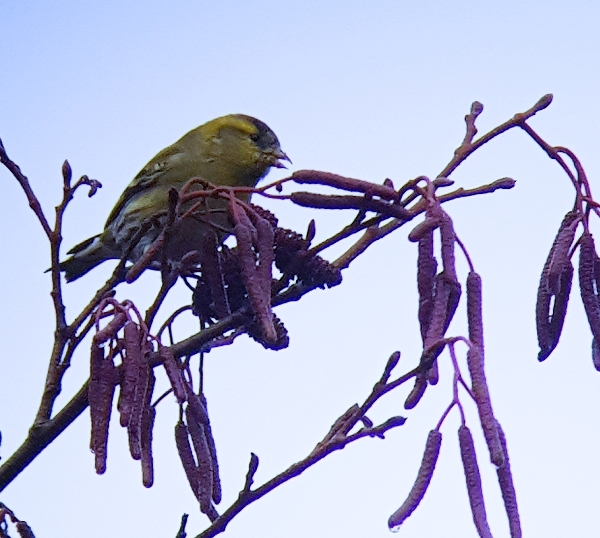 Siskin in the alders

From there I walked into Yeo Valley, still needed to see Treecreeper, Grey Wagtail, Bullfinch and Red-legged Partridge. I found Green Woodpecker, a large flock of Siskins (50+), a single Treecrepper and about 20 Red-legged Partridges. By this time it was approach 3pm and I wanted to drive over the Sutton Bingham to scan the gull roost, I knew that there would about 10 more species for me there, my list was currently 47 and I had set myselk a target of 60 for today.

I arrived at the Reservoir at 3:15 and parked on the main causeway, from there I had great views of the northern end of the main reservoir and the whole of the west pool. I quickly added Tufted Duck, Teal, Great Crested Grebe, Moorhen, Grey Heron, Wigeon, Canada Goose and Common Gull to the day list. 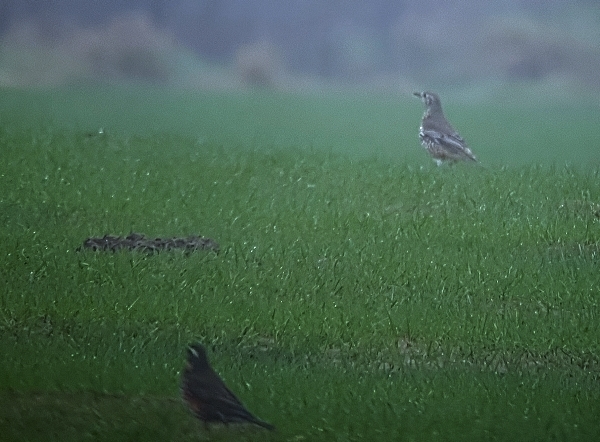 Two Kingfishers were perched in bushes along the shoreline of the west pool and a male Sparrowhawk dashed along the enbankment below me chasing a Pied Wagtail which escaped. Wow, that was nine new species in five minutes!

A large number of gulls gather on the main body of the reservoir to wash before flying off to roost, recently alerge number of Mediterranean Gulls have joined the throngs of Black-headed Gulls. Today however, I saw just 9 of them but I also added L BB Gull to the list and noted Herring Gulls, Cormorants, Mallards and Pied Wagtails too.

there are Mediterranean Gulls in this picture, can you find one?

Steve Chorley turned up to scan the gulls, we found nothing new so we decided to look for Little Owls further south alonmg the resevrvoir. After failing to see the Owls I left for home whilst Steve drove to the southern tip of the reservoir, I wish I had gone with him!!

As I approched home Steve texted me to say that he had seen a Peregrine Falcon on the usual pylon and a BARN OWL sitting on a gate, ouch that hurt!!!

I was very happy with my list of 59 species, all local to my area, who needs to go dashing about to see a good number of species anyway!