This was just a quick mid-afternoon walk for a very short time. I took my wildlife-camera with me to set it up along the stream. We had had very little rain over the last week or so which meant that the water level of the stream would be quite low. I saw very few birds but a flock of 21 Stock Doves was nice to see and a record count for this species in the valley.

I tied the camera to a tree one the bank of the stream and will collect it in a few days time, I am hoping for some footage of Otters and Foxes. Several common species were seen, I watched a large flock of Redwings in the canopy of the alder trees but the light was so bad that I  never got a single decent shot.

my camera is strappd to one of these trees

WEATHER: dull and overcast, rain all morning,  a little brighter after 2pm

WEATHER: an atrocious morning of dark cloud and annoying light rain which never ceased until 2pm. My birding mate, Guy from Yeovil, called and told of a flock of Redpolls in Nine Springs Park that he had been watching, so this morning, in the rain, I went there and searched the area for an hour or so. 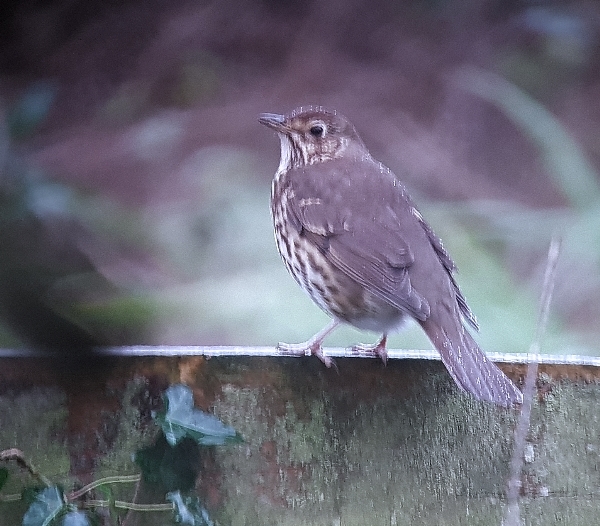 There was without doubt a lot of birds around the area where Guy sent me, I saw a flock of Siskins with Goldfinches, lots of Blue, Great and Coal tits. A Goldcrest appeared, a flock of Chaffinches fed along a track but I never had a sniff of a REDPOLL. I walked around the lake and saw Mute Swan, Moorhen, Mallard, Mandarin Duck and many common woodland birds.

the exquisite Mandarin Duck taken through a wet lens

I got soaked, my optics got soaked, the few pictures I took were soaked, so I gave up and went home.

By 2pm I was dry and warm again, the rain had stopped so I went out for a second spell. This time I drove to Sutton Bingham, the light was still really quite bad and was fading fast. I parked on the causeway and scanned the west pool and the northern expanse of the main part of the reservoir. A few gulls lingered in their usual place and I picked out a few Great Crested Grebes, Moorhens, Mallards and Cormorants.

I searched the southern end of the reservoir and found……….not a lot!!  Four Teal, eight Great Crested Grebes and a single female Mallard, the water level was up after 12 hours of rain and so there was no place for snipe to hang out. All in all it was a couple days best forgotten, it can only get better tomorrow!