WEATHER; yet another dull and dismal day, low dark cloud with some rain and wind. Temp 4C

Yet another day of dull, wet weather, but it was brightened up for me by a little finch and a lovely walk into Yeovil from Stoford. I set out at 9am and spent nearly an hour slowly walking and watching my way up the hill into Yeovil Country Park. I took the track from Stoford than runs adjacent to Barwick House & Park without actual crossing their land.

Plenty of birds were up and about, Robins and Song Thrushes were singing as they were yesterday and even Great Tits were calling out their “teacher, teacher” calls. Many Jackdaws and Rooks were up in the sky, don’t they just love a windy morning for frolicking about. I also saw great Spotted Woodpecker, Crows, Magpies, Redwings and most of the common garden species. 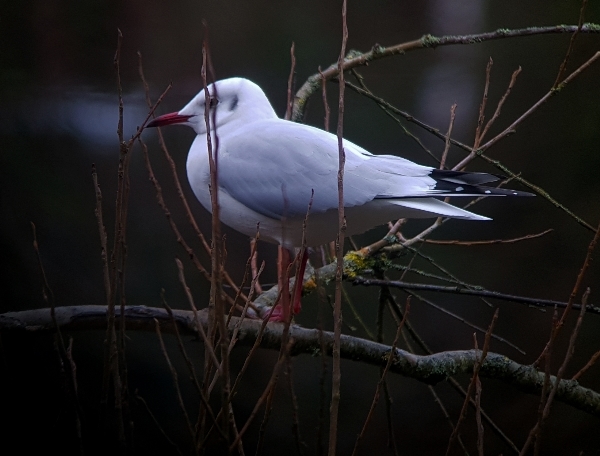 Once I had dropped down into Nine Springs it was much more sheltered from the wind and the bird life was just as frenetic, Blue Tits, Great Tits, Long-tailed & Coal Tits dashed about in search of breakfast, I also watched Goldcrests, Goldfinches, Wrens and Robins. Just as I reached the main pool area of the park it started to rain, quite heavily. I was cursing Guy Campbell who had told me about seeing Redpolls in the park on Sunday which had encouraged me to visit  the park these last two mornings. On both occasions I got a soaking and had up to now missed the bird. 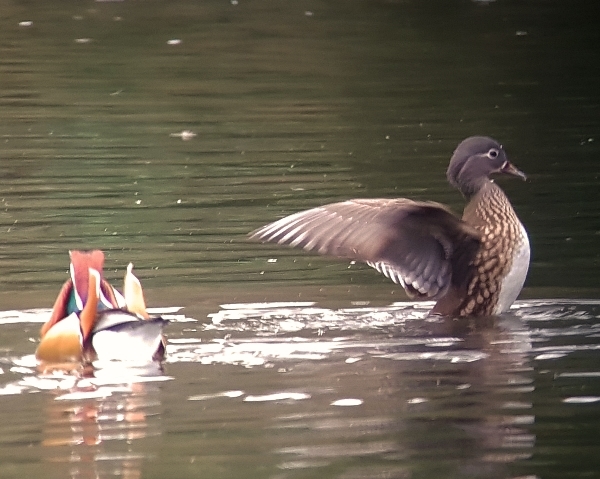 Luckily for Guy the rain shower did not last long and soon I was enjoying some lovely birding around the pool, I watched Mandarin Ducks pairing off, a male Little Grebe, dozens of Mallards and a few gulls with both Black-headed and Herring Gulls present. The Alder and Birch Trees were growing around the children’s park area and that is where I concentrated my search for the Redpolls, no children were in the park so I felt OK about walking around with my bins and telescope in such a sensitive area. 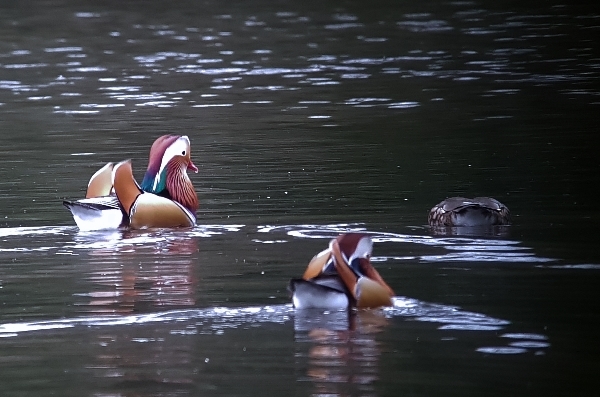 I found a small flock of Goldfinches, a Goldcrest, Coal Tits and so many Blue Tits I couldn’t count them. Finally, after an hour or so I got onto to pair of LESSER REDPOLLS, hallelujah, my first redpolls of 2021 and number 79 on the year list. Well, I was made up after that and walked back up through the woodland without a care in the world, until I nearly slipped on my ass in the mud!! 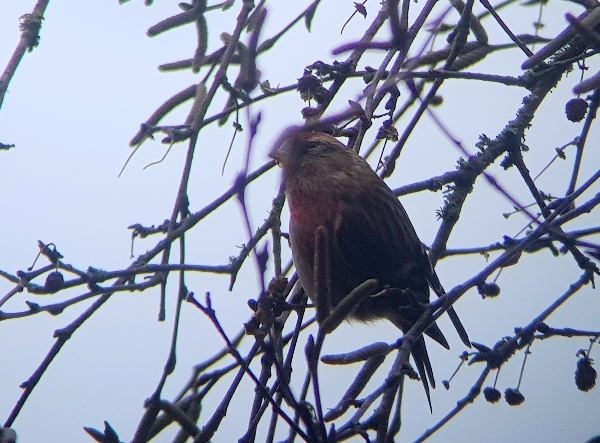 at last, my first Lesser Redpoll of the year 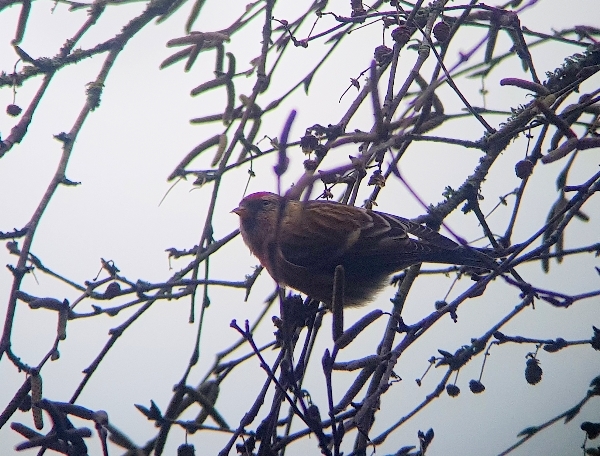 The next bird I saw was a Kingfisher, it dashed up the stream to the next pool and I knew exactly where he likes to perch because I have seen him do this before. Sure enough, there he was under an overhang over the second pool, not in a good position for photography, but nice all the same. As I cleared the woodland and began the steep walk up to the heathland area, I heard a Jay and got onto two birds high up in the oaks. I spent quite a long time waiting for them to drop down, but they never did, so my pictures are of distant birds. 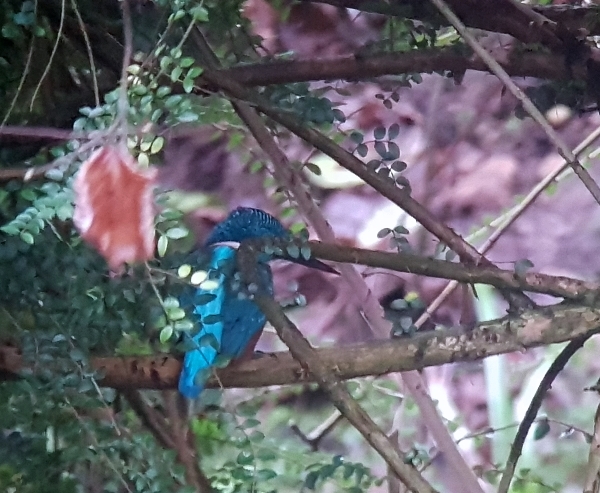 Kingfisher, hiding in the overhang

In the bramble and gorse scrub I saw another white-rumped bird, this time it was a Bullfinch, it flew up and over the brow of the hill and out of sight. Then a couple of Chaffinches flew up from the bramble and I saw a third bird sitting on the top. This bird was a Greenfinch it was feeding on the remains of blackberries and as I got a little closer four more came into view. Unfortunately they were flushed by a dog walker, I did manage a couple of shots as they sat in a sapling. 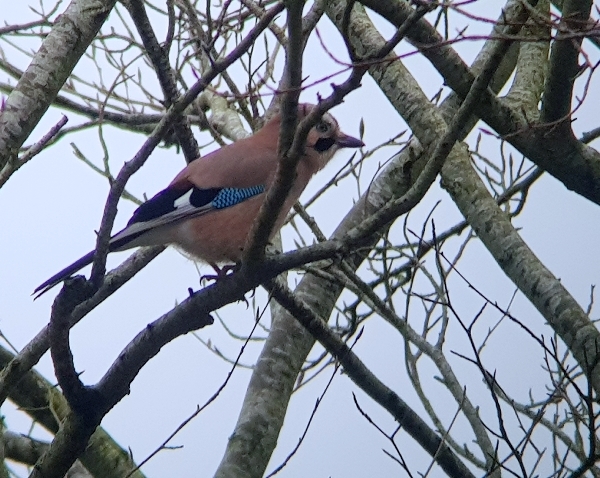 Across the top pasture I was able to scope a maize-stubble field, it was covered in Jackdaws and Rooks, I also found a flock of about 30 Chaffinches and many more Redwings, my search through the Chaffinches did not produce the hoped-for Brambling. 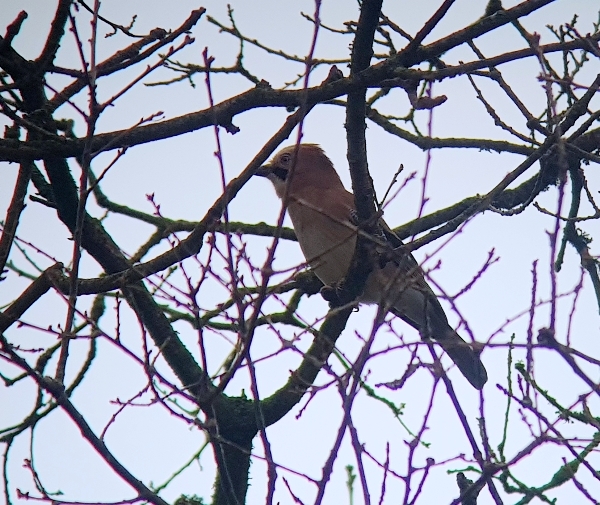 I walked down through Barwick Park and saw Little Grebe, Moorhen, Mallard and Mute Swan on their lake and a little later I saw a few Fieldfares in the hedges. 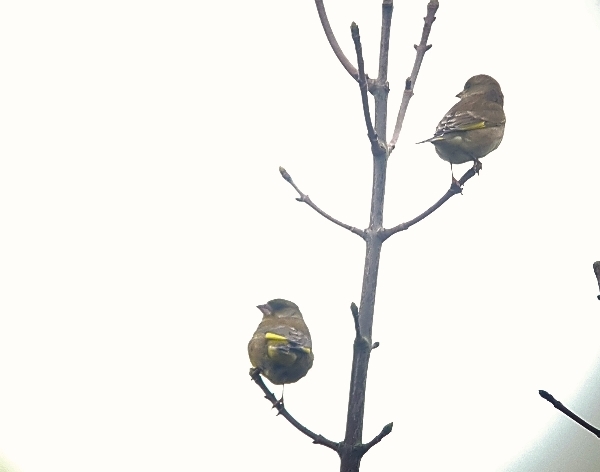 two of the five Greenfinches seen at Nine Springs today

My only other birding was from the comfort of our lounge. I had collected a pocket full of fallen crab apples and I spent some time cutting them in half and attaching them to twigs near my feeders. I am hopeful that a Blackcap may drop in for a bit of fruit, in the meantime I watched Nuthatch, Coal Tit and the usual array of common garden species.