It was 2pm by the time I stepped out of the door, I had been watching my feeders for a while and I put up another nest box, this one was an open fronted type designed to attract Robins. I also put several more half-apples around the feeders to try to attract Blackcaps and thrushes.

My year list is sitting at 79 species and I can’t really see where number 80 is coming from, maybe a Coot at Barwick pond or Nine Springs, a Brambling with the Chaffinch flocks or a flyover Red Kite, or perhaps a Goose or Duck or even a Great Egret joining the other Egrets at Clifton Maybank. It’s the excitement of birding that drives you on, you never know what’s around the next corner.

I never expected to see much as I walked into Yeo valley and that is exactly what I got! The sky was full of Jackdaws, playfully zooming across the sky using the strong wind to propel them up and down like taking a roller coaster ride, they really enjoy this playful behaviour. A Raven appeared over Rook’s Hill and it also appeared to be using the wind to perform a rolling display, it would climb up high and then fall with wings folded twisting as it dropped. This bird was also uttering a strange trilling noise, it land on the side of the hill several times but only momentarily, I managed to get off a few shots of it. 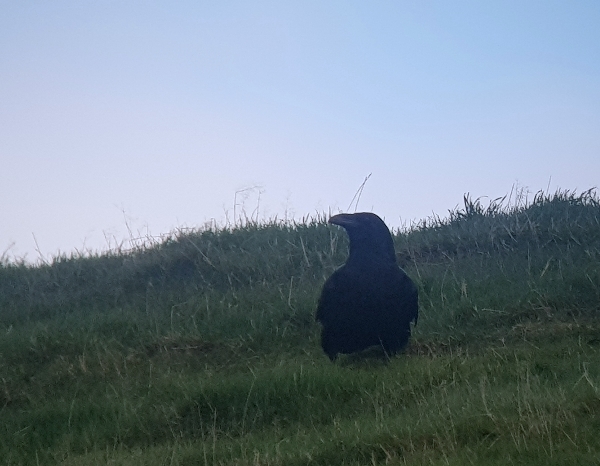 I kept close to the stream during the walk hoping to see something in the sheltered areas down by the water’s edge, a Grey Wagtail appeared not too far from me but it was very flighty and very busy looking for food.

I retrieved my wildlife camera which had been attached to the side of a stream-side tree for the last few days, unfortunately some dip-stick had place the camera with some dead leaves in front of the lens, so when the wind blew the movement of the leaves triggered the camera. I now have over one hundred short videos of dead leaves blowing in the wind, however, I did capture a Grey Squirrel in the background, a first for my camera.

there is a Grey Wagtail in there somewhere, can you spot it?

As I progressed down stream I saw a flock of finches land in the canopy of some tall ash trees, I counted 17 Chaffinches and one odd Goldfinch, this smaller bird must of thought it was cool to hang out with his bigger cousins, the light was quite bad so the pictures are too! 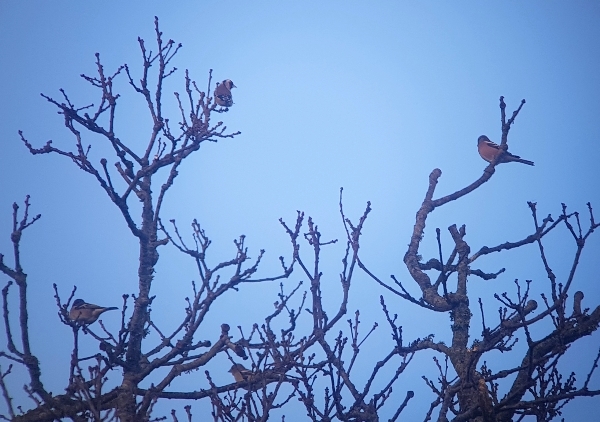 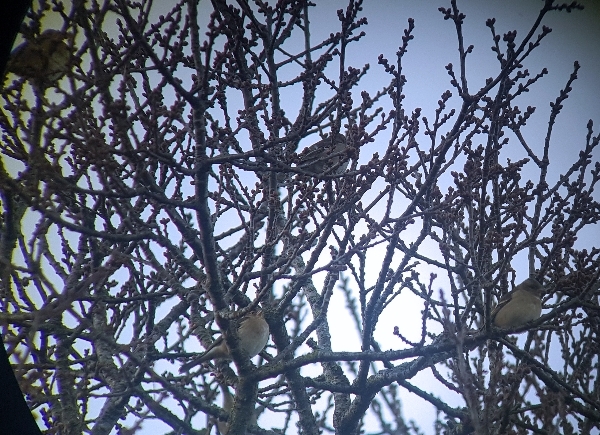 I walked back hoping to get another view of the Grey Wagtail or perhaps an Otter or even a Kingfisher, but nothing stirred except for the wind. The buds on the trees are beginning to sprout, some of them turning green, it won’t be long until spring is here, hooray!!