WEATHER: wet and windy until around 11am, sunny spells in the pm  still cold less wind. Temp 7C

It was quite miserable weather first thing but it got better as the day wore on, by 11am it had stopped raining. I went for my exercise walk at 11:40, a march around the village in windy but dry conditions. I saw House Sparrows, Starlings, Jackdaws, Magpies and a few Herring Gulls.

I left it until almost 3pm before I went for a birding walk, so you can imagine that there wasn’t too much to see and I didn’t stay out for long. Bright clear patches appeared in the sky and prolonged decent light until way after 4pm, the days are starting to get longer, hooray!!

I took the lane towards the station and then turn south under the bridge and followed the track through the woodland along the stream heading southward. I saw a few birds in the woods, I can’t believe how many Blue Tits are still around, dozens of them flitted through the bushes with fewer Great Tits and the odd Coal Tit. I noticed a couple Buzzards in the trees and one or two more in the sky, I stopped to photograph a Jackdaw before I left the woods. 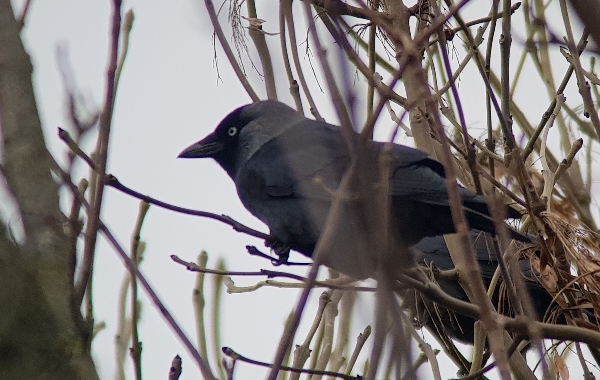 The cheeky Jackdaw with its white eye

The two main meadows above the stream have very contrasting habitats at the moment, the first one was ploughed up in October and seeded with grass which is now about 6 inches high, the other meadow has been left fallow for a couple of years and has long grass. The first field was full of birds and second was barren of birdlife as far as I could see. 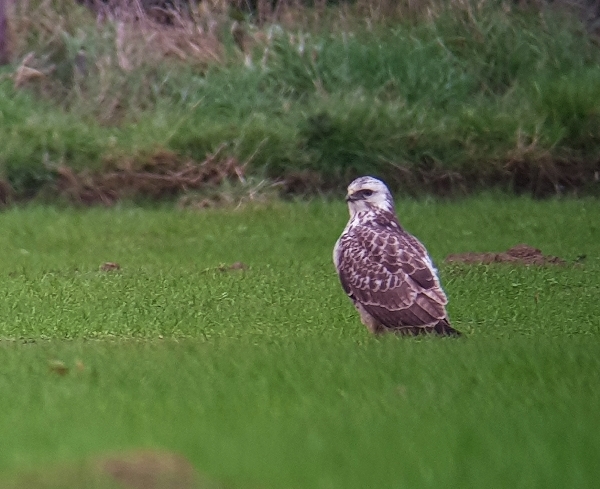 one of the many Buzzards in the short grass, hunting worms

Nine Buzzards, hunted in the short-grass meadow, when I say hunted I mean they stalked worms!! Yes they pranced about chasing worms which are always present after rain. I watched them catch a few whilst I was there. Over 50 Redwings were also in the field with a flock of Starlings, a few Blackbirds and a single Song Thrush. A Green Woodpecker flew across the field making a lot of noise. 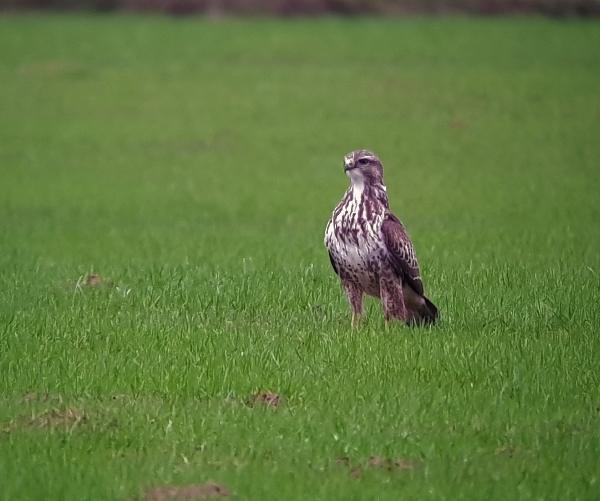 I search a hedgerow in the hope of finding a Blackcap without and then a Common Kestrel flew over the top of me and landed very close, click, click, thank you very much. 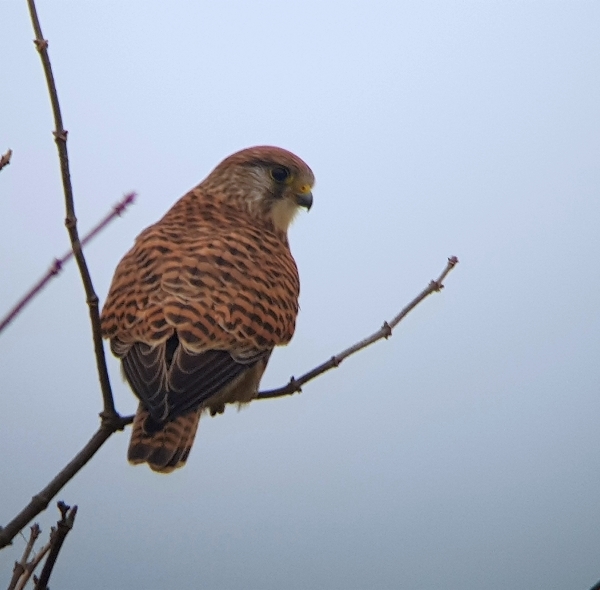 This female Kestrel has been in the callet since early autumn

I continued southward toward Cowpool Farm, where I scanned the sheep field and the maize stubble field for more species. I saw a lot more Redwings and a few Pied Wagtails but apart from large numbers of Rooks, Crows, Jackdaws and Wood Pigeons I saw little else.

view from the secpond meadow with Cowpool Farm in the distance

My route back was along the main road through the village, my boots were caked with mud and didn’t fancy making matters worse by taking the same track back. I was home by 4:30pm. My feeders were very quiet at this time but I had seen Great Spotted Woodpecker earlier in the day.