STOFORD TO CLIFTON MAYBANK AND BEYOND

It was icy cold out there when we eventually set off for our morning walk, yes Dawn was with me so expect some decent scenic pictures later on. I had to wait a while for Dawn to get ready (no comment) so I sat on the garden bench and watched the feeders and whilst doing so I noticed a bird of prey sitting in the Ash Trees on the far side of the meadow. It was a Sparrowhawk enjoying the morning sunshine, I quickly got my scope onto it and fired off a few pics which considering the distance turned out OK. 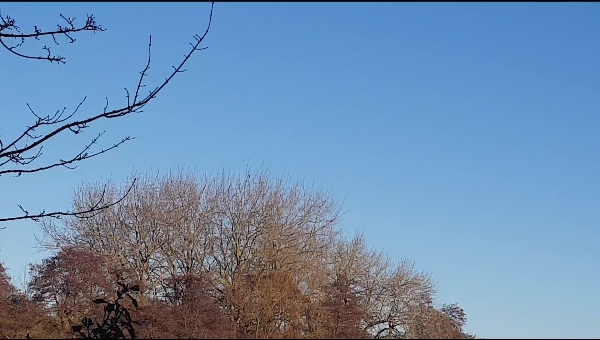 If you look very carefully you might see a Sparrowhawk in the top of these trees!! Honest there is one there 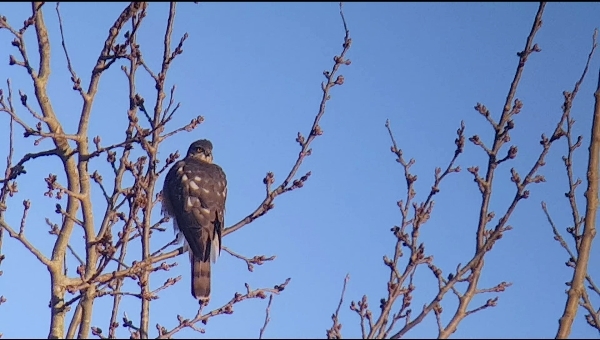 there you go! Its amazing what a telescope and a phone-camera can do

We set off on the route to Clifton Maybank taking the track on the south side of the railway track and turning eastward up through the large grass meadow, the usual Buzzards, Redwings, Fieldfares, Mistle Thrushes and Blackbirds covered the frozen grass meadow. 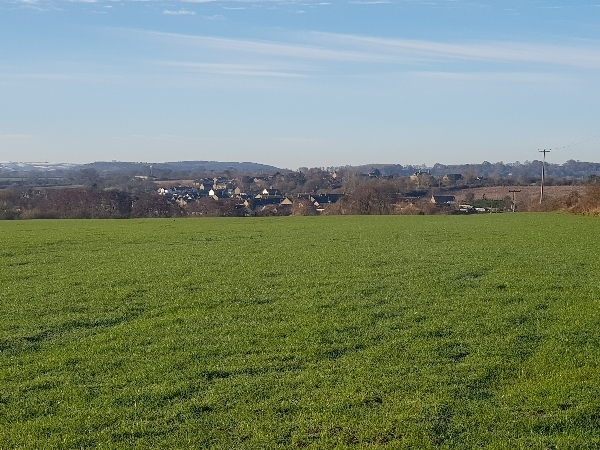 looking down onto Stofrod Village from the grass meadow

More thrushes flew from the hedges and Hornbeam Trees as we made our way through the grounds of Clifton Maybank House, the pond was frozen over so no Moorhens could be seen. We turned from our usual route and headed across a couple of meadows to Clifton Farm, along the way we saw half a dozen Little Egrets, lots of Herring and Black-headed Gulls, a party of Meadow Pipits and a few Pied Wagtails. 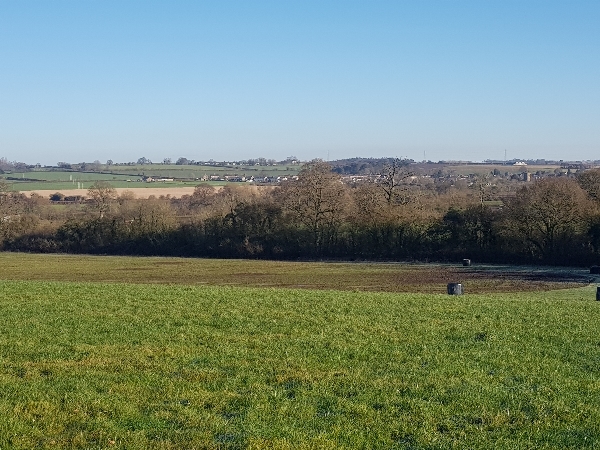 a view of Bradford Abbas Village from near Clifton Woods

Once we past the Farm we got onto very muddy and half-frozen tracks heading towards a new destination for us, the village of Ryme Intrinseca, just past the farm we found a family of Foxes, a vixen with two well grown cubs they didn’t seem too bothered by our presence. A very distant Peregrine sat on a pylon and a second pylon, a bit nearer, held the larger female. 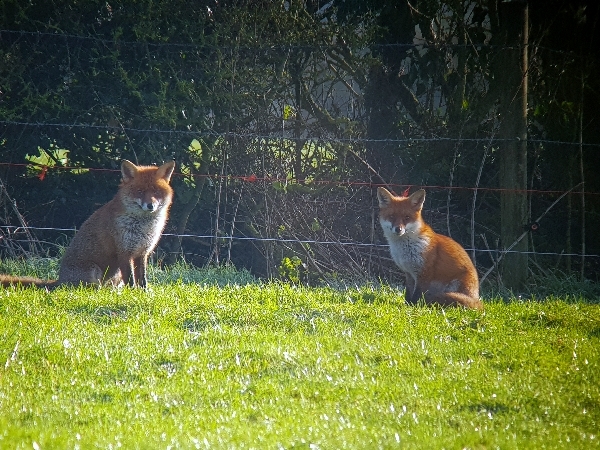 these foxes were not scared of us at all 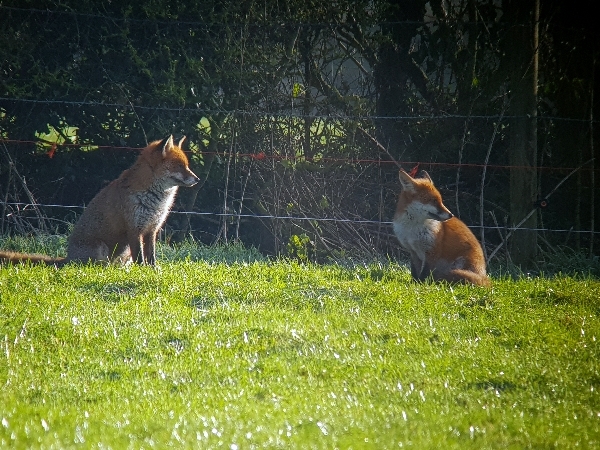 the vixen on the left was with two of last year's cubs, here is one of them 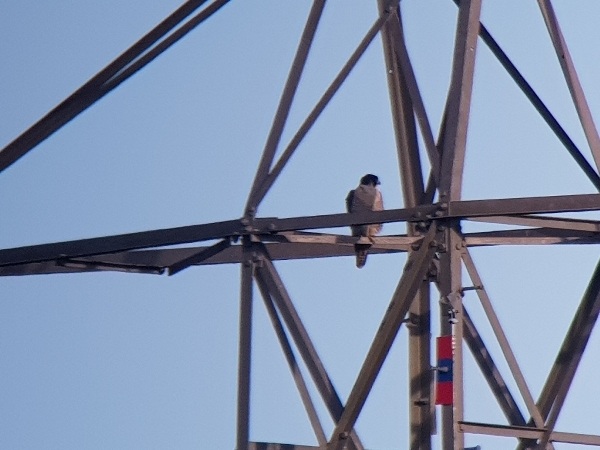 record shot of the Peregrine Falcon

The next meadow had a pond in the middle of a mature copse, I tried my usual stealthy approach, oops!!!  Half a dozen Mallards flew up quacking loud in protest of being disturbed and a couple of female Mandarins also flew off, but in silent protest. 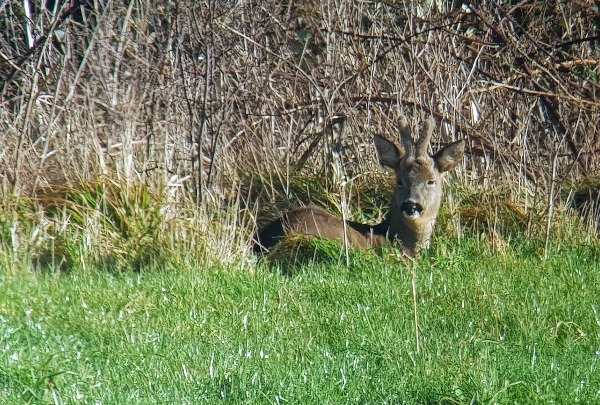 After crossing two more meadows we entered an ancient track which ran east-west between two hedges, a stream followed the same route, unfortunately after just 50 meters we realised that the track was flooded and there was no way through. We tried to get around the problem by walking in the fields adjacent to the track but we hit a wide ditch full of water and we had to turn back.

We walked underneath a large Rookery, it was very noisy up there, the Rooks were getting ready to start the breeding process, they usually have eggs in the nest by February. Lots of Jackdaws were also present, I realised that I hadn’t taken a picture of a Rook so I set up my scope and obliged. In the grounds of Clifton Maybank House there is a spot where you can see over Bradford Abbas village into the distant fields, a very distant flock of birds caught my eye, I got them in the scope and saw that they were Golden Plover, there must have been 200 of them, a nice find! 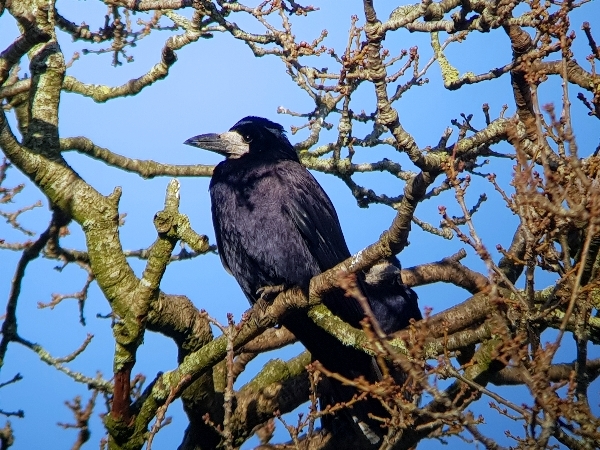 one of the many Rooks at the Rookery near Broadclose Farm

Our walk back home was very pleasant we stayed on farm tracks and avoided the meadows because they were getting very muddy as the sun melted the ice and the frozen ground. At Broadclose Farm we watched more Egrets and Gulls in the cow fields and in a small pond along the side of the track I spotted two Moorhens and another pair of Mallards. 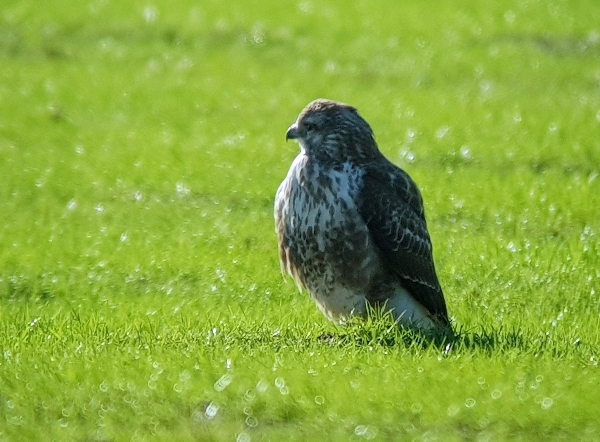 There were more birds in the grass meadow above our village when we got back there, seven Buzzards could now be seen and more Fieldfares & Redwings were present, I also counted three Mistle Thrushes. It was a shame that we could not complete our chosen route today but there will be plenty of chances in the near future. We were out for 3 hours and only covered 4 miles, it didn’t stop me having a little nap just after lunch.