WEATHER: dull and grey all day, some drizzle later, no wind but cold. Temp 1-3C

What a great start to my February birding, I saw over 40 species and had a great time watching them. The sky was dull and grey, it was cold but there was no wind at all, I love those still days regardless of the amount of sunshine. I decide to walk over to Pavyotts Lane to look for the Golden Plover flock but along the way I made a quick diversion into Barwick House to scan the pool there. 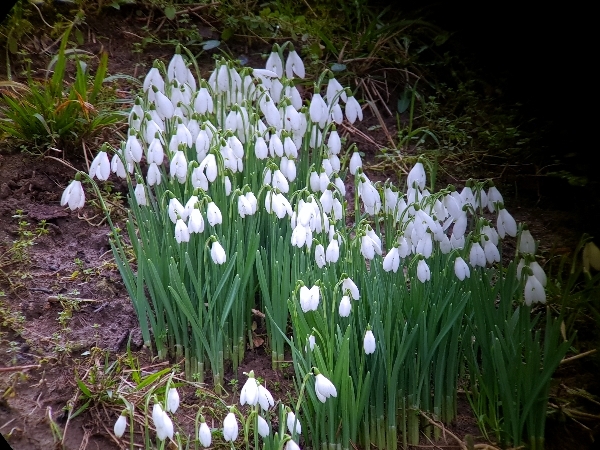 Snowdrops in the lane

I watched the garden feeders for 10 minutes from inside the living room before I ventured out. Two female Great Spotted Woodpeckers joined a small flock of Goldfinches, with Chaffinches, Robin, Blackbirds, Blue & Great Tits and House Sparrows in the garden. I then added Magpie, Jackdaw, Wood Pigeon, Crow and 29 Redwings, all of which were seen in the meadow and trees adjacent to our garden. 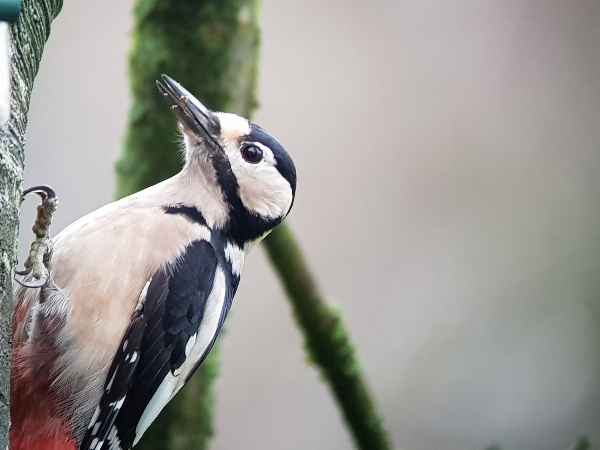 I walked along a track to Barwick which takes you onto Rexe’s Hollow Lane, I added Fieldfare, Herring Gull, Song Thrush and Dunnock along the way and in Barwick Park I scanned the lake. On the water I noted six Little Grebes, 3 Moorhens, 2 Mute Swans and a dozen or so of Mallards. 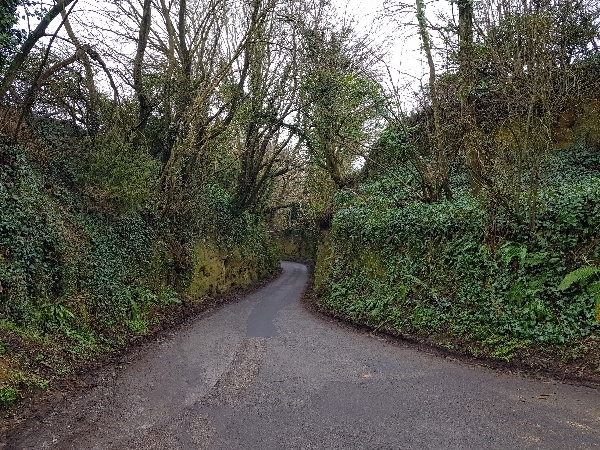 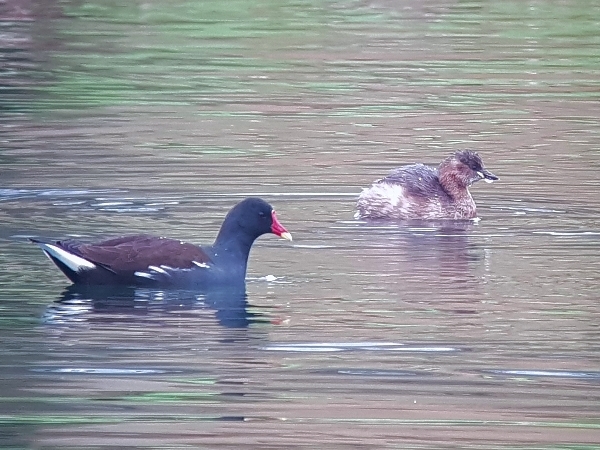 Walking through Barwick Village I added Common Starling, Collared Dove and a Mistle Thrush flew up onto a TV aerial from a garden, it never stopped long enough for a picture. In Rexe’s Hollow I ‘scoped a Bullfinch which was calling and uttering its very short song, Bullfinches are quite frugal with the notes and so their utterances and not quite a true song. 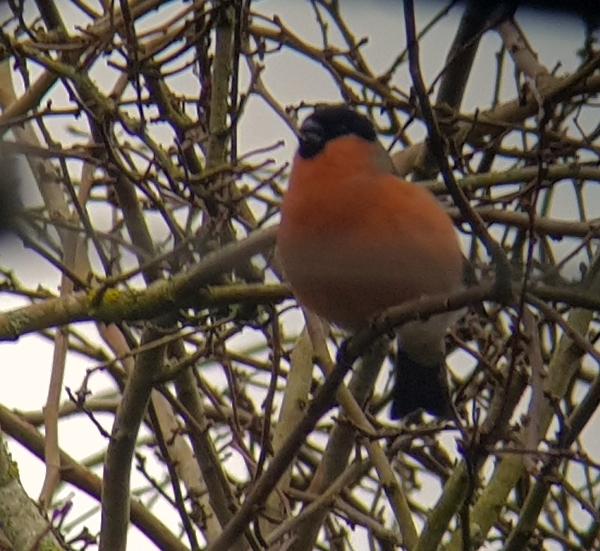 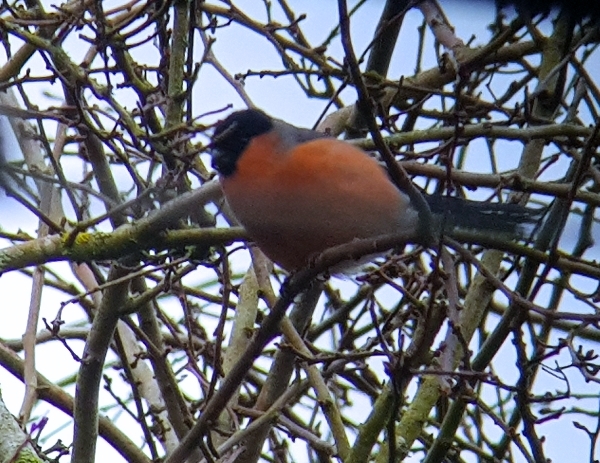 Once I got into Pavyotts Lane things started to happen, I scoped the first cow field to the south just as a farmer entered it in his tractor and trailer carrying a huge mound of cow’s muck. Despite this disturbance a huge flock of Lapwings remained on the ground albeit quite a distance away. Further scoping revealed a large flock of Golden Plovers which were even further away, I also picked out Pied Wagtails, a flock of Starlings, some Chaffinches and six Herring Gulls. 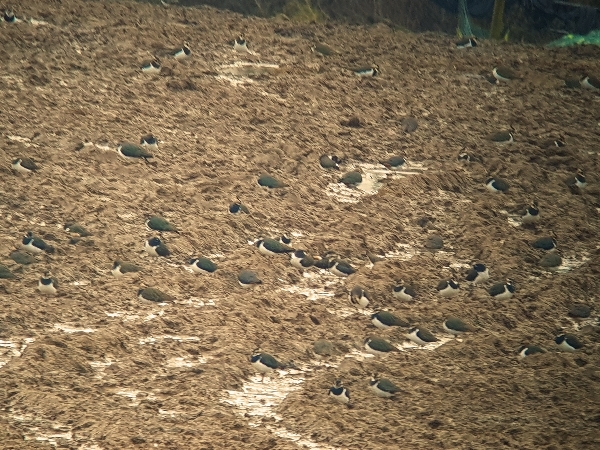 a few Lawings in the cow field taken from pavyotts Lane

From another gateway a little further along the lane I had much better view of the Golden Plover, but suddenly they took to the air, I estimated that there was about 80-100 of them. They circled around a couple of times before disappearing for the rest of my visit. I searched the egdes of the cow field for Stonechats and Meadow Pipits without luck. 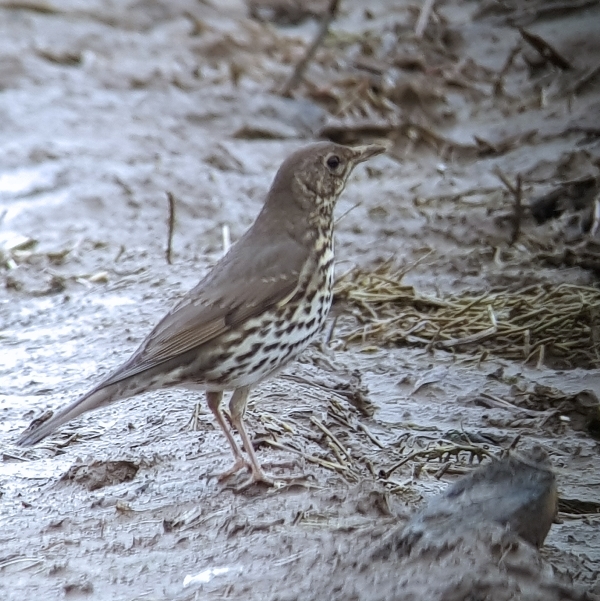 Song Thrush in the potato field 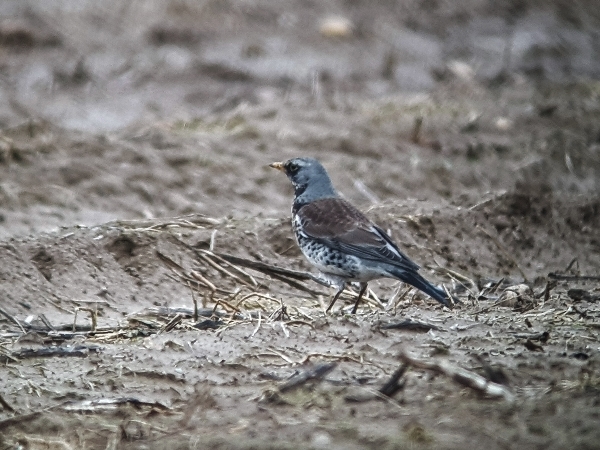 also a Fieldfare, one of about 50 in the potato field

The potato field on the other side of the lane was also full of birds, dozens and dozens of them. Mostly they were thrushes, Redwings, Fieldfares, Song Thrushes and Blackbirds but I watched a flock of 40+ Linnets, 15 Chaffinches, 4 Ravens and a lot of Starlings. In the trees along the lane I saw Goldfinches and I had several sightings of Greenfinches, a couple of males were singing, issuing their ‘wheezing and chattering’ sounds from the tops of the trees. 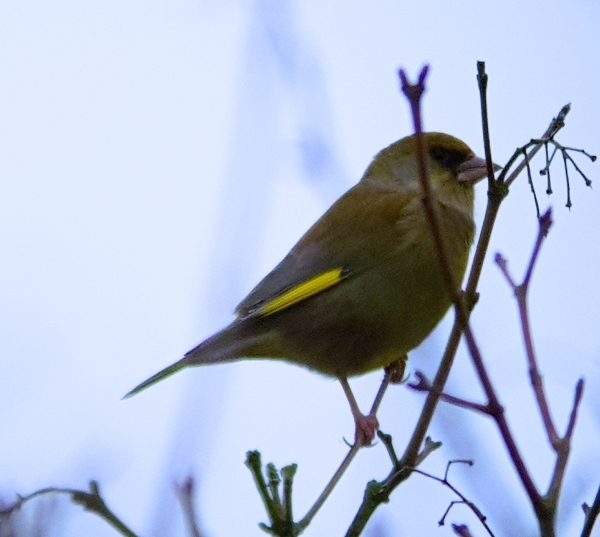 record shot of a Greenfinch in poor light

Next I walked further to the maize stubble field where I saw a lot more Fieldfares than Redwings for a change and a Grey Wagtail was a nice surprise. Despite searching I never saw Skylark or Meadow Pipit but I added Buzzard to the list. I spent some time trying to get good pictures of the thrushes and finches before I left for home.

My journey back was full of the same sightings except that I added Long-tailed Tit, a flyover Cormorant to the list and in Barwick Village a Green Woodpecker skimmed over the top of me and disappeared behind a bungalow. 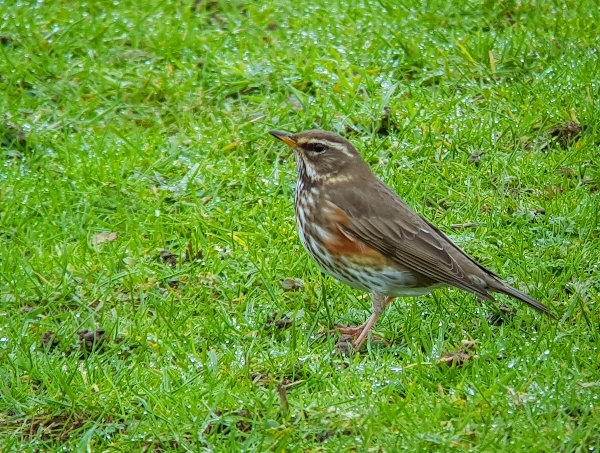 Just before I got back into Stoford I noticed a Redwing in a small paddock, I am sure this was the same bird I had photographed before because it wasn’t a tiny bit afraid of me. I was allowed to get quite close and it did not fly off, just like the one I saw here a week or so ago. So click, click and here we have yet another picture of a Redwing (at least Rita will be happy with today’s efforts). 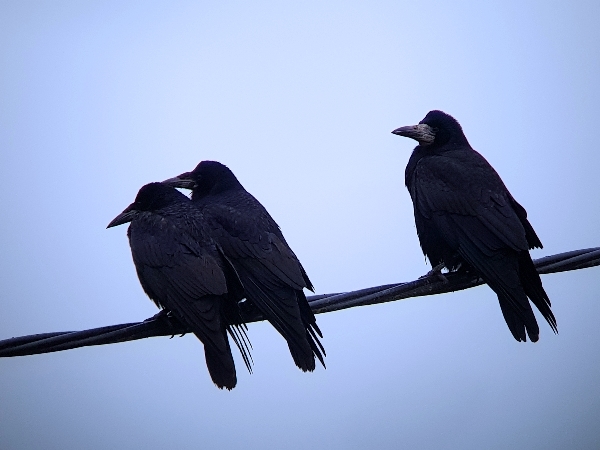 After lunch I decided to go for a quick walk into Yeo Valley, I was hoping to see a Siskin and that is exactly what I saw, just one, solitary Siskin!! No big flocks just one individual. But I also added Jay and Red-legged Partridge to the list and for my best sighting of the afternoon I watched not one, but two, Treecreepers working their way around an old oak tree. That made a total of 44 species for a lovely day out. 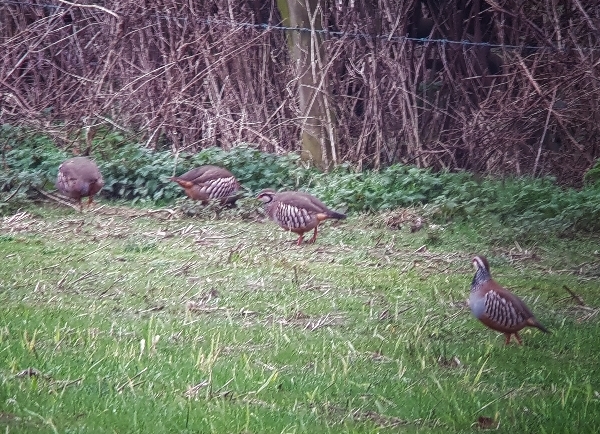