My god it was cold again and it needed a brave person to go out birding, so I stepped up to the mark. I walked round to the Yeo Valley, along the lane en-route to the entrance gate to the valley I stopped at the road bridge over the stream and found a Kingfisher. This was the first sighting I had had of this species on the stream this year, I noted that the water level was almost back down to normal and quite clear, so the Kingfisher would be happy to fish again. 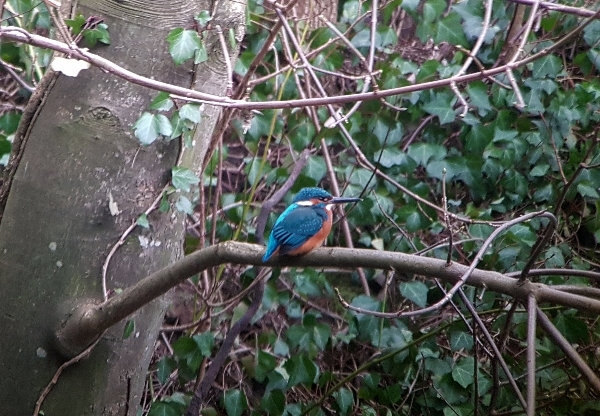 As I walked into the valley I watched numerous Redwings fly up from the grassy slope of Rook’s Hill and above them on the ridge I scoped the head and shoulders of a Green Woodpecker. Several Jackdaws and Crows were also feeding on this sheltered side of the hill. I followed the course of the stream and saw very little wildlife, just past last year’s Kingfisher ‘nesting-bank’ I had set up my wildlife camera, it was aimed at recording anything that walked across a fallen tree which lay across the stream. (Later the I examined the content of the memory card and saw that only a Grey Heron had been recorded). 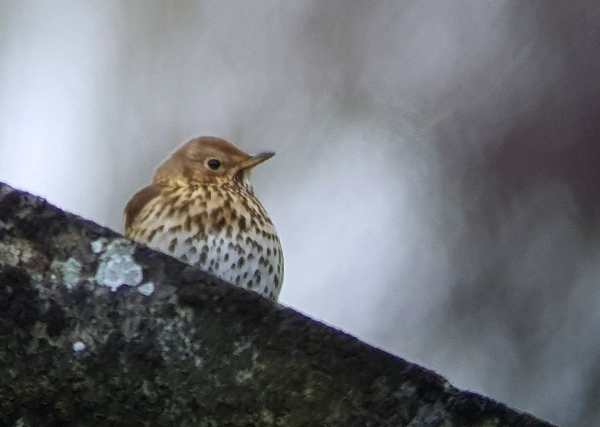 I walked all the way to the River Yeo and in the meadows on the other side of the stream, at the confluence of the two bodies of water, I saw a large number of Redwings and Fieldfares, probably over 200 birds in all. I then followed the River eastward to the rear of Rook’s Hill, it was very windy there, I didn’t stay long. Walking up and over Rook’s Hill I walked as fast as I could and noted a Great Spotted Woodpecker in flight.

I was grateful to get back into the warmth of our flat and enjoyed a hot drink with lunch, the feeders were busy with all the usual suspects plus the addition of a Pheasant, this bird has been entering the garden for the last few days, it sits on the fence for while before dropping down and searching for seeds that I have scattered around. 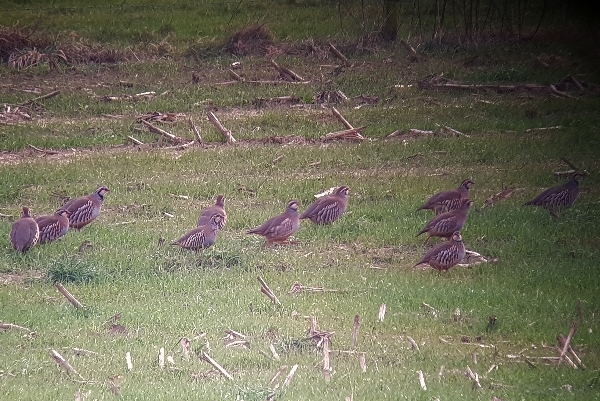 a covy of Partridges seen at Barwick Park

Dawn had her vaccination booked at 2pm at a centre which happens to be situated next to Ninesprings Country Park in Yeovil, so I hitched a lift with her and walked home via the country park. I had called my mate Guy Campbell and we decided to meet up and go for a birding ‘exercise walk’ along the springs. 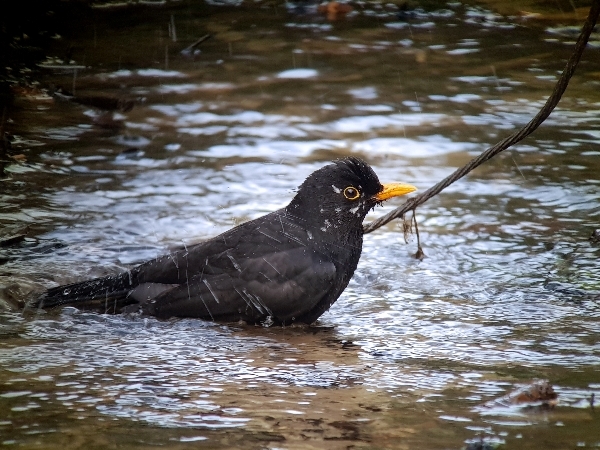 a Blackbird taking a bath in freezing cold water, how macho is that?

The main lake was half frozen over and held the usual Mute Swan, Moorhen, Little Grebe, Mallards and Mandarin Ducks, we walked up through the woodland climbing the man-made steps and footpath and passing a number of pools and cascades. We searched for the wintering Firecrest without a sighting but at the very top of the walk we stood and watched part of the stream where a few birds were flitting about. 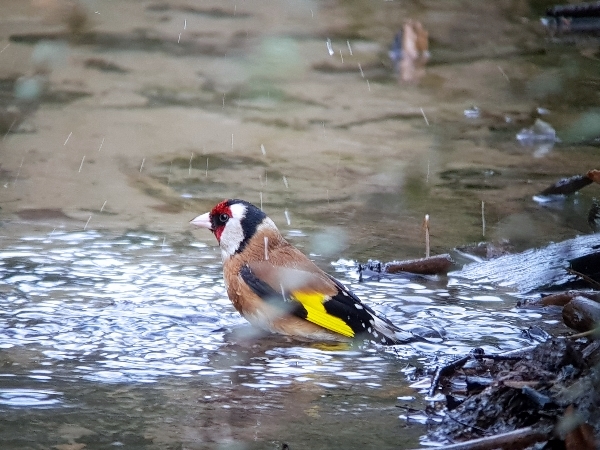 a Goldfinch making a splash, it is not raining

Very tame Robins came very close, a Song Thrush rustled the leaves in search of insects and both Blue Tits and Great Tits were moving through the shrubs. We watched a couple of Siskins in the bushes, they dropped down to the water and took a quick drink, we watched and waited for their return and saw Goldfinch, Blue Tit, Coal Tit, Blackbird and a Robin also come down to drink and/or to bathe. 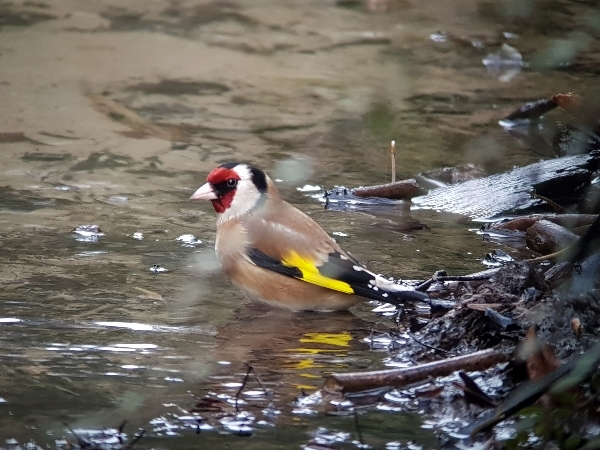 another shot of the beautiful Goldfinch

After a while we got cold and decided to quit, Guy walked back down to the car park whilst I climbed a hill to cross the Alden Estate before walking down to Barwick House. On the way home I saw a Goldcrest, a small covy of Red-legged Partridges and the lake at Barwick was frozen over. 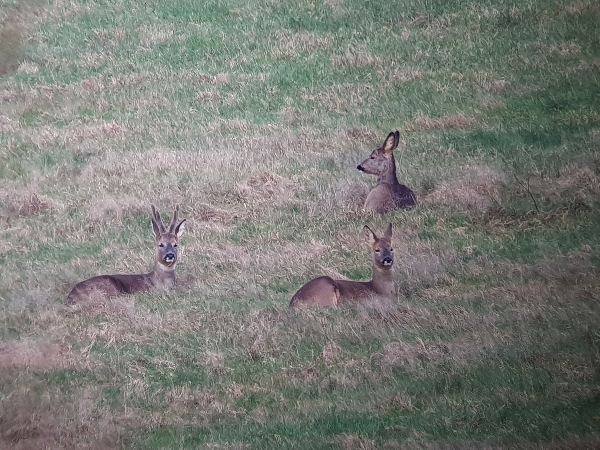 A herd of 5 Roe Deer sat in one of the distant fields and a small ice-free part of the lake held 2 Little Grebes and a single Moorhen. 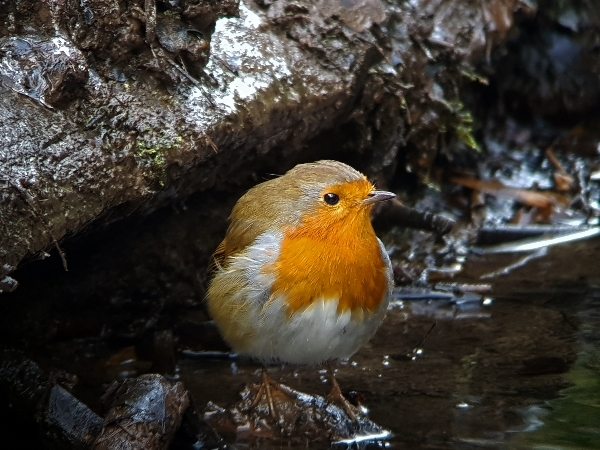 for any Americans reading this blog -  this is a real Robin

I got home around 4pm it was getting really cold out there so I was glad to get home once more, I never ventured out again.

For almost a week now a NORTHERN MOCKINGBIRD has been frequenting a garden in Exmouth, Devon, England. This North American species is a real rarity in the UK, this is only the 5th ever recorded here! If there wasn't a lockdown there would be thousands of birders twitching this species, there would be chaos in Exmouth.

This picture was taken yesterday by Sue Hayes who lives les than a mile from the bird. 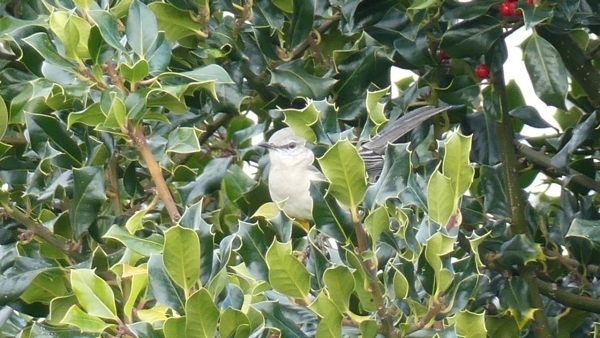