It was raining hard at 9am so we didn’t set out until 10am after the shower. We took the track to Barwick via Rexe’s Hollow Lane and saw a Green Woodpecker in a horse paddock, some Redwings in the tall ash trees and lots of common species in the shrubs and bushes. A lot of bird song could be heard including, Blue & Great Tits, Dunnock, Robin, Chaffinch and Song Thrush, at least two Great Spotted Woodpeckers were drumming.

We took a short diversion into Barwick House Park to scan the lake for any new arrivals, we saw 7 Little Grebes, two Moorhens, four Mallards and the Mute Swans were notably absent, in fact, they haven’t returned since the lake froze over a week ago. 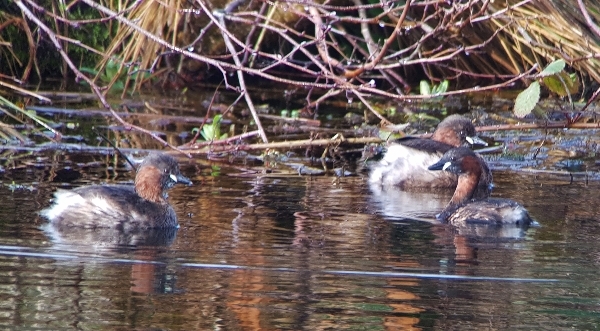 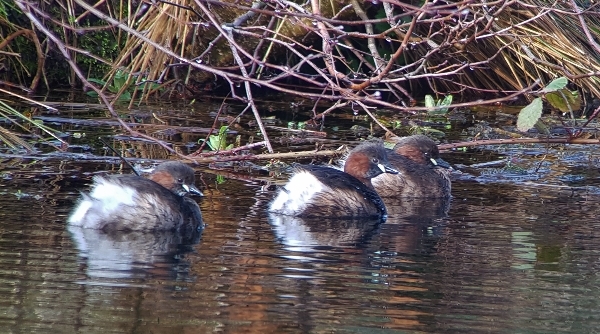 There are three great birding fields in Pavyotts Lane, they all came up trumps today, the area was full of birds. The first of the three fields is the large cow field on the south side of the lane, there was a group of gulls sat in the middle with a dozen or so Lapwings, I noted Black-headed, Herring and Lesser Black-backed Gulls. In the background the cows were feeding on the beet field, along with them I saw Linnets, Meadows Pipits and over 30 Pied Wagtails, I thought that the beet field needed a closer examination and made a mental note to visit later. 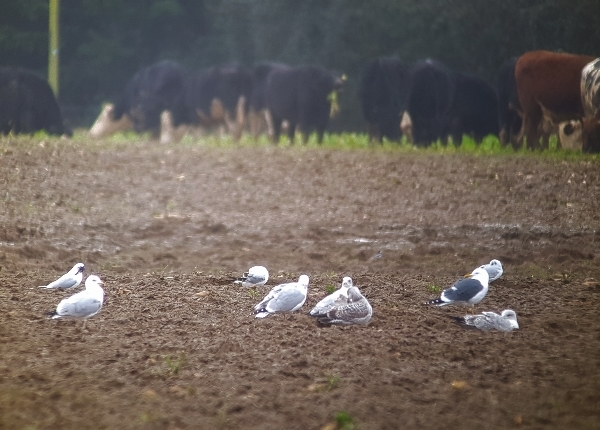 Black-headed, Herring and Lesser Black-backed Gulls above and without the L BB Gull below. The cows in background are eating the beet leaves. 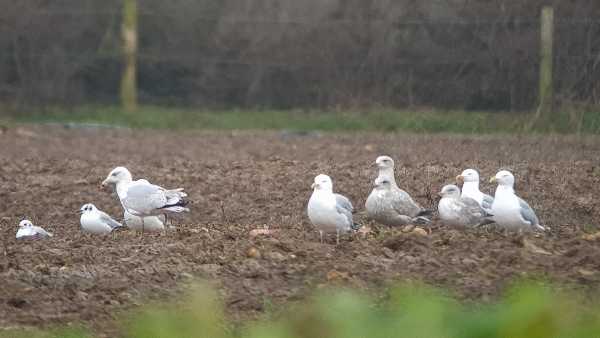 On the north side of Pavyotts Lane there two huge fields, the first is a potato filed that has just been ploughed, I couldn’t see much in this field but more about that later. The next field is a maize stubble field and it held quite a few birds, mainly corvids, but I did see some Fieldfares and Redwings in there too. In the stubble we made our highest count of Magpies seen together! A collection of Magpies is called a ‘parliament’ and sitting today in the ‘House’ were 16 members, that is amazing!!

Just before we left a Crow flew over chasing a Sparrowhawk, whoopee!! That was a tick for the month of February, number 69!

Following the lane all the way down to Pavyotts Mill we saw little else, I ventured into the beet field and Dawn refused to go because of the muddy conditions and also the cattle are a little feisty even though they are behind an electric fence. It was well worth going up to the fence to look for Reed Buntings even though I never saw a bunting because I had great views of Common Stonechats (3), Meadow Pipits, a huge flock of Linnets and at least 50 Pied Wagtails. 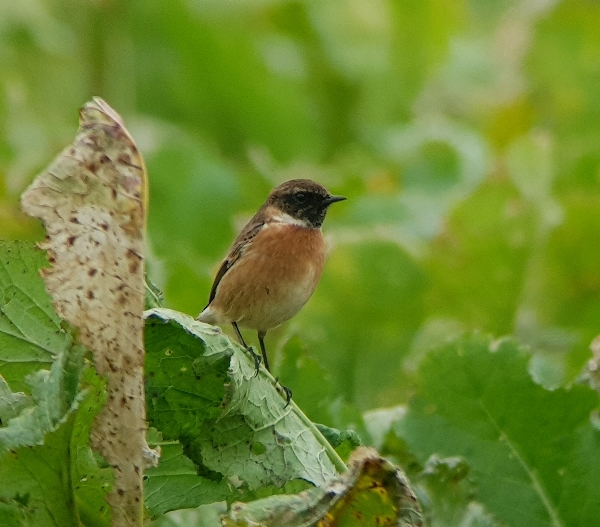 Common Stonechat in the beet leaves

I got nearer to the gulls but could not turn one of them into a Mediterranean Gull although I tried hard to do so. On the way back to where Dawn was waiting I spotted a beautiful male Bullfinch feeding low down on broad-leaf dock seeds, having perfected my stealthy-sneaking-up-on-birds-technique I got fairly close to the Bullfinch and shot the bird, (with the camera of course!!) 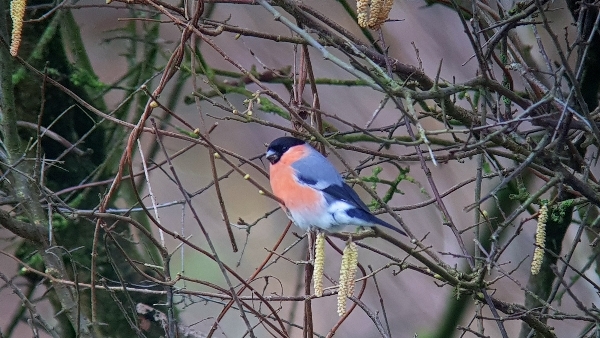 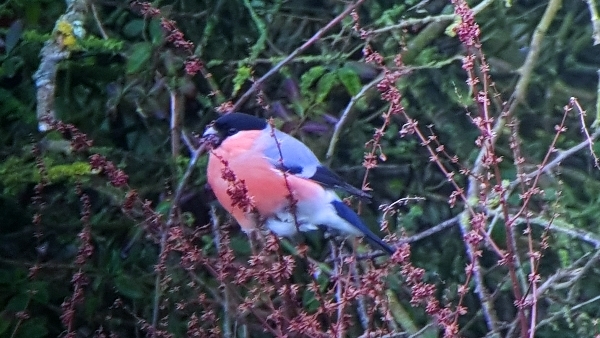 On our back up the lane I noticed quite a bit of activity in the potato field, so I climbed up a small bank to scope it, I was amazed at the number of birds present. 100+ Fieldfares, with some Redwings, large numbers of Starlings, flocks of Linnets, Meadow Pipits, a few Goldfinches and Chaffinches, Crows, Jackdaws and Magpies. A pair of Ravens and a pair of Buzzards flew over. 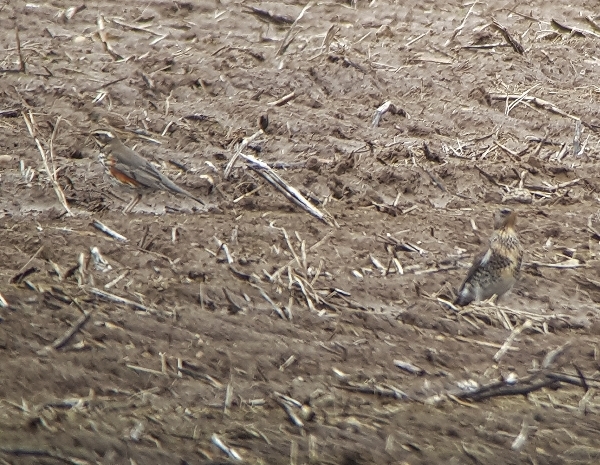 Redwing with a Fieldfare, there is another species in this picture can you find it and name it?? 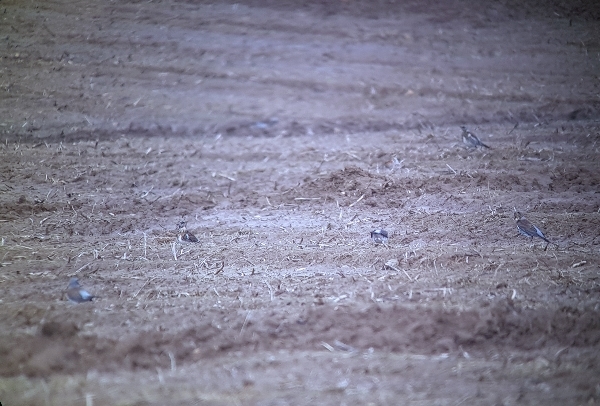 there are five Fieldfares shown here in the potato field

We left because the sky was getting progressively darker, we made it back and remained dry, we had been out for 2 hours and covered just over 4 miles.