Both of us had chores to do this morning so we never got out for a walk until 2pm, by then the sky had brightened up and patches of blue sky appeared. We decided to walk through Barwick and visit the area around Pavyotts Lane.

Before we left I spent some time watching the bird feeders and had a great surprise when a couple of old favourites reappeared. First, I noticed a Coal Tit visiting the peanut feeder, this is the first sighting of this little fellow for a month, so it became number 72 for February. Within a few minutes another new visitor arrived in the shape of a Nuthatch, once again this was my first sighting of this species in the garden for over a month but not new for February. Just after that excitement a Goldcrest dashed around a few of our shrubs and even went up to a moss dispenser that I put up yesterday (moss for nesting material, I also put up sheep’s wool for the same reason). 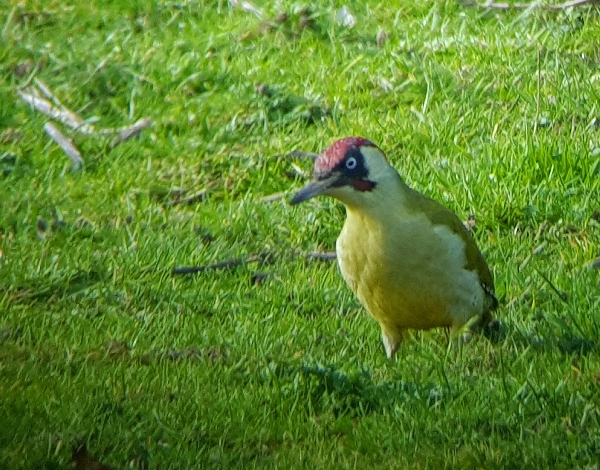 this Green Woodpecker let us get fairly close, what a smashing, obliging bird

The first bird we saw during our walk was a Kingfisher, we saw it from a small bridge which spans a small tributary that flows into the stream in the Yeo Valley. Walking up to the horse paddocks we saw a few Redwings and a male Green Woodpecker was very showy. Most of the common garden birds were seen in Barwick and many flowers were in bloom along the grassy banks. 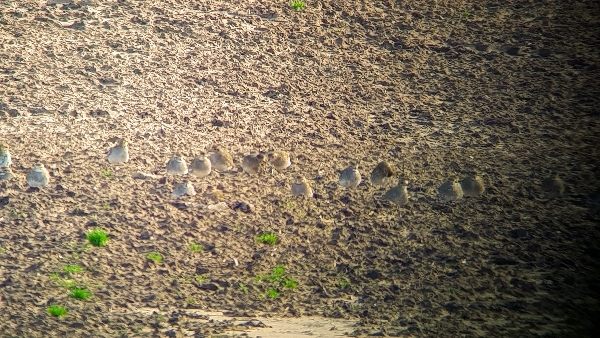 From Pavyotts Lane we scanned the cow field to the south and I was surprised to a large flock of Golden Plovers, I estimated that there were 100 birds, a  quick count revealed how wrong I was, I counted only 99!!

Also in the same field was a flock of around 50 Linnets, a small flock of Starlings and a dozen or of Pied Wagtails, I couldn’t see a single Lapwing. The potato field on the north side of the lane was actually being worked by a farmer in his tractor so I didn’t see anything from where we stood. 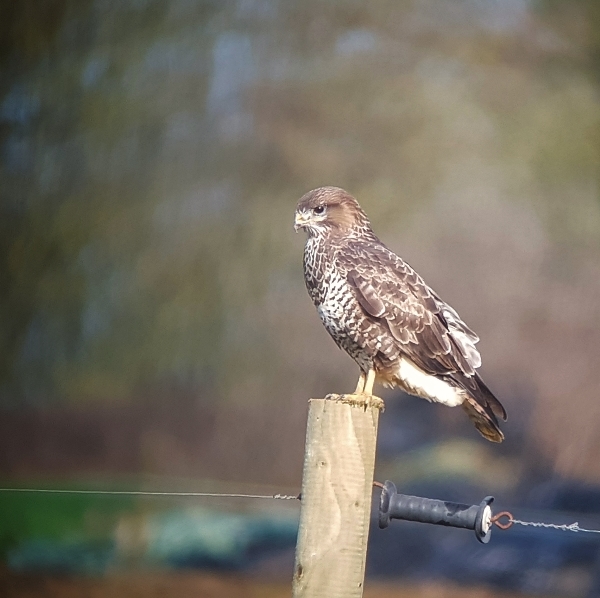 We walked all the way down to Pavyotts Mill, I had a quick scan of the beet field to look for Stonechats and Reed Buntings but I saw neither, a Common Buzzard on a fence post was my best sighting there. We walked along a very muddy track back up to the maize stubble field where quite a few birds were feeding. I counted 8 Magpies, 2 Jays in the trees, a pair of Ravens, 4 Crows and many Jackdaws. 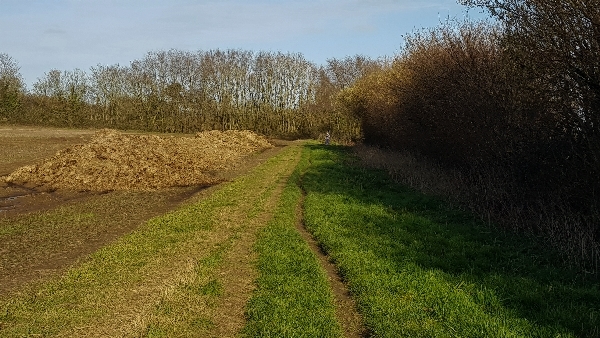 Our circular walk took us back along Pavyotts Lane and I had a second look into the potato field, this time I saw very many birds, including: Black-headed and Herring Gulls, Fieldfares, Redwings, Starlings, Rooks, Crows, Jackdaws and Magpies.

We returned home through Barwick Village and missed out a visit to the lake at Barwick House because of the time, we got home just before 5pm, we now had a cloudless sky but as the sun went down it got very chilly.