WEATHER; dull, grey, misty and very cold in the morning. Bright with sunny spells in the afternoon. Temp 2 -8C

Despite the gloomy weather conditions I went out for a walk on my local patch and had a wonderful time. Boy it was cold out there, a northerly wind went right through me, because of the recent warm conditions I was slightly under-dressed and after 5 minutes I really missed my gloves, hat, over-trousers and my extra jumper.

I walked round to the Valley entrance and began my search for Siskins, before I walked down the valley I spent 15 minutes at the first bramble clump looking for Long-tailed Tits, a pair of them looked as though they were prospecting for a nesting site when I looked yesterday. I never saw the Long-tails but Robin, Dunnock, Blackbird and Blue Tits all used the bramble for cover or foraging for food. 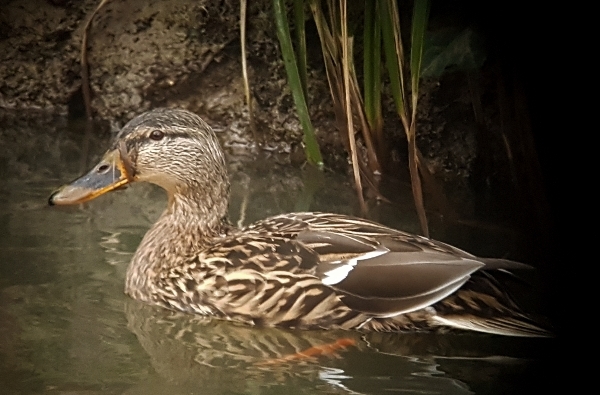 Don't laugh!!! I know this is only a Mallard, but she represents the first duck I have seen on the stream this year!!!

As I walked the path alongside the stream I heard a Treecreeper singing! Wow, my first ‘Creeper in song this year, I found it and shot it, with my camera. That is the second Treecreeper holding a territory along the stream that I have found in the last few days. I walked all the way down to the River Yeo putting a lot of effort into trying to locate a Siskin flock without luck. I also hoped for a Kingfisher sighting, but again I was disappointed. I did see Great Spotted Woodpecker a few times with another drumming in the distance. 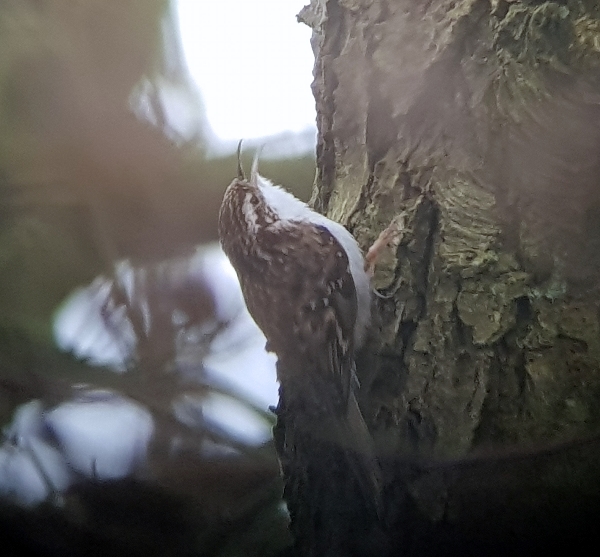 Treecreeper in song, my first record of this species in song for 2021 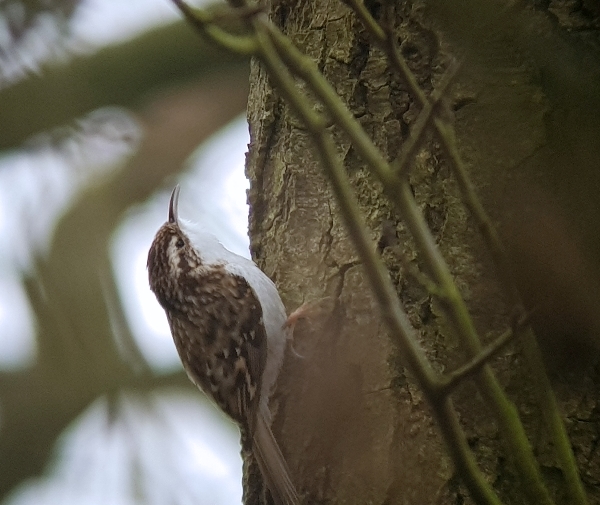 Fly-over sightings include Cormorant, Herring Gull, Jackdaw, Rook, Crow, Wood Pigeon and Stock Dove, a good number of Redwings were dashing from one side of the valley to the other and more than the usual flock of Chaffinches was visible several times. 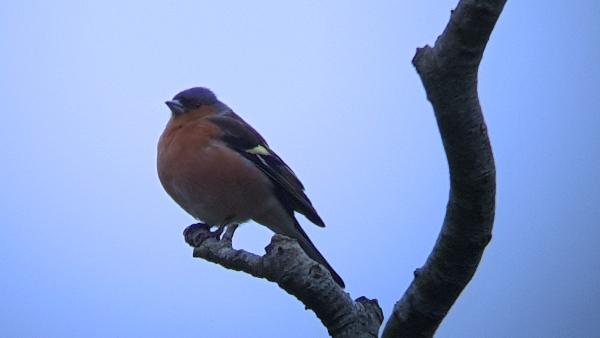 this male Chaffinch was also singing until I pointed the scope at him.

I turned around at the River Yeo and retraced my steps, after a short while a heard a splash into the stream and knew that that was the sound of an Otter feeding. Sure enough I looked down to the stream and saw a large dog Otter swimming up stream. I dashed ahead of him, sat down on the bank and waited for him to swim to me. I nearly gave up it was so cold, I had no gloves, but I stuck it out and was rewarded with a great showing. 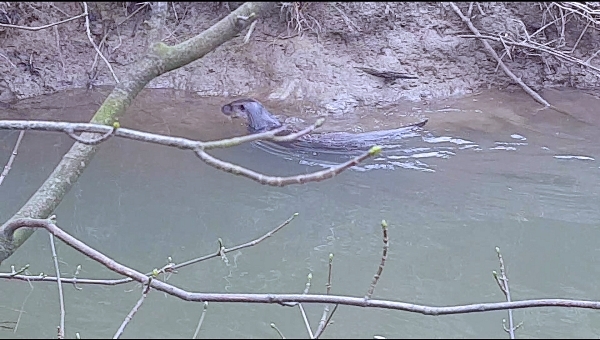 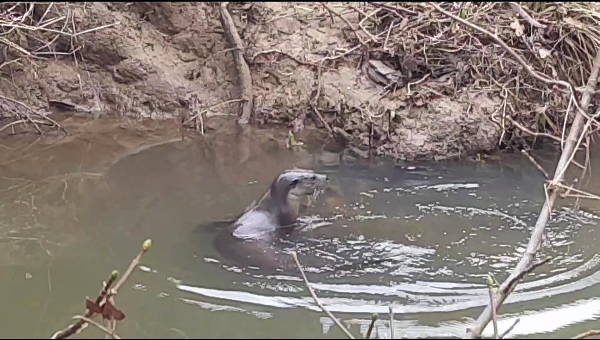 After that excitement I walked back to the lane and crossed over to the track that went south into the stream-side woodland. I saw more Redwings and a Song Thrush sat nicely on a fence post for me. A Common Kestrel, the usual female, flew up and landed on a telegraph pole and a pair of Common Buzzards called above me. 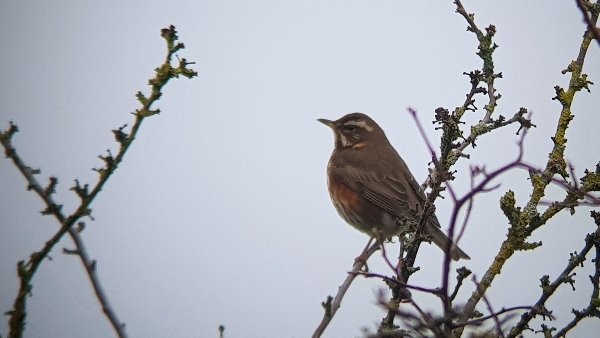 Redwing above and Song Thrush below 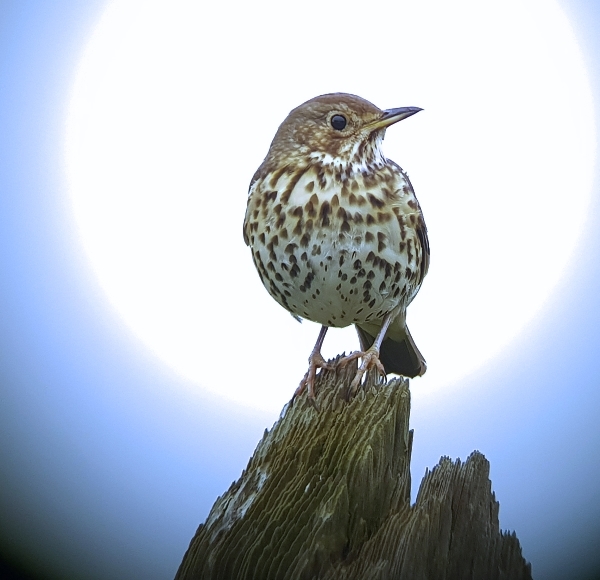 I walked into the meadow above the woods to look for Mistle Thrush but no a single bird was feeding in the grass, as I returned through the woodland I heard a Goldcrest, it was singing not just calling. There was just one fir tree in the woods and guess what? The Goldcrest was singing from there, I saw it a few times but it wouldn’t stay still for a photograph. 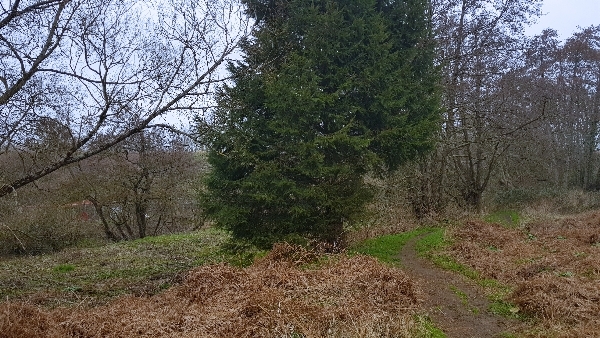 the only fir in the wood harboured a singing Goldcrest

I had been out for 3 hours, I was frozen and so I headed home, in my garden I noted a Long-tailed Tit helping itself to some of the sheep’s wool I had planted in the bushes specifically for the birds to use as nesting material. 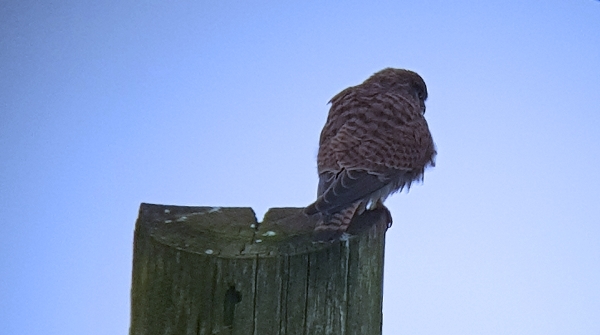 the back end of the female Common Kestrel

At 2pm Celia, my sister-in-law joined us for another walk, this time I piled on the clothes, plus hat and gloves, after walking for 5 minutes I realised that the sun was shining the wind had dropped and it was much warmer, now I was over-dressed!! Doh!!

We walked to Clifton Maybank where I scoped some cow fields and found 3 Little Egrets, a Cormorant sat in the usual dead tree and we saw Grey Wagtail along the River Yeo. As we walked through Bradford Abbas Village I heard a Greenfinch calling and there it was with some Goldfinches. I can’t believe that I have seen this species more times in the last three days than I had done in the last 3 months!!

At Mill Farm we watched some Alpacas and some Peacocks, none of which went on my list, we also saw a pair of Ravens, Moorhens, more Redwings and a couple of Song Thrushes. The walk back through the village produced a Nuthatch sighting, also Collared Dove, House Sparrow, Common Starling ( I saw a very large flock of some 200+ Starlings around Cowpool farm this morning) and a Coal Tit.

We got back home around 4:30pm, we had covered 4 miles which was the second 4 mile-walk of my day. Don’t expect an early rise in the morning because I am whacked!