Dull and overcast, I seem to be using that weather description quite a lot these days! I went out around 9am and walked round to the valley, I still need to see Siskin for my March list so I hoped to find some today. 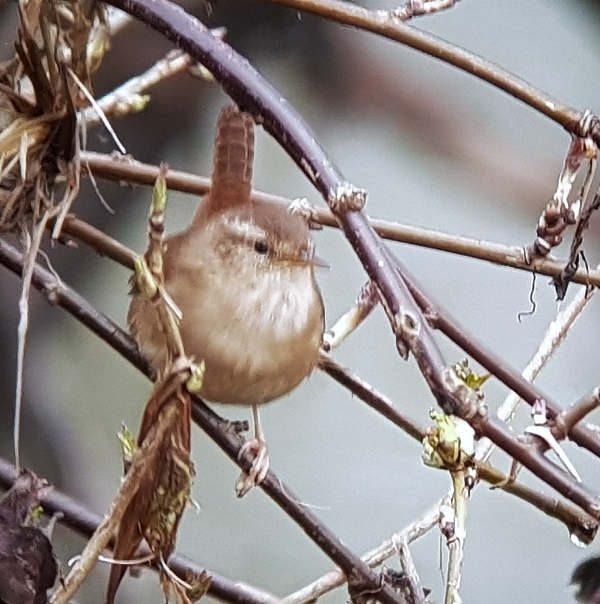 Not very good captures of the Wren, the light was very bad 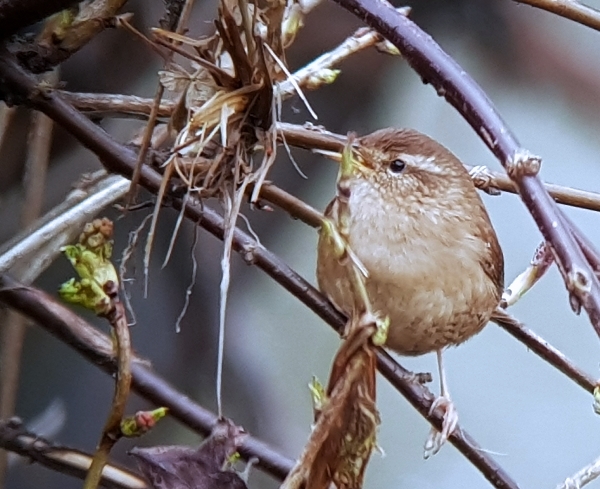 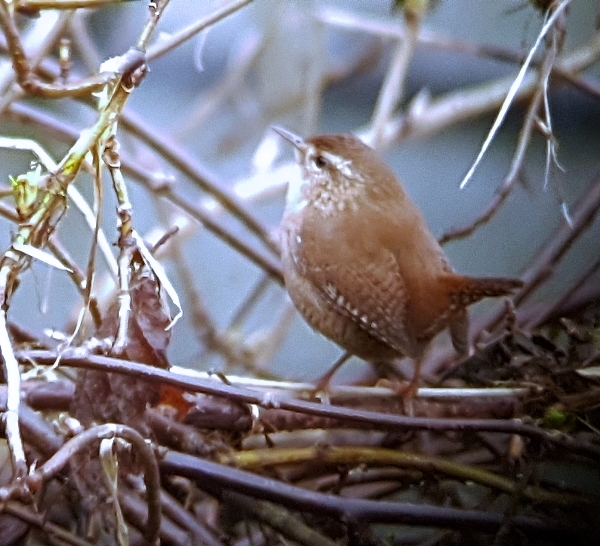 Once I got onto the entrance track I stopped at the brambles to check for Long-tailed Tit activity around the suspected nest site, I did see them but they were not near the brambles. The only other significant sightings I has along the stream was that of two Ravens flying over, a couple of Red-legged Partridges and a few dozen Redwings. The Redwings were in the tree tops and kept 50 meters ahead of me all the way down to the river Yeo. 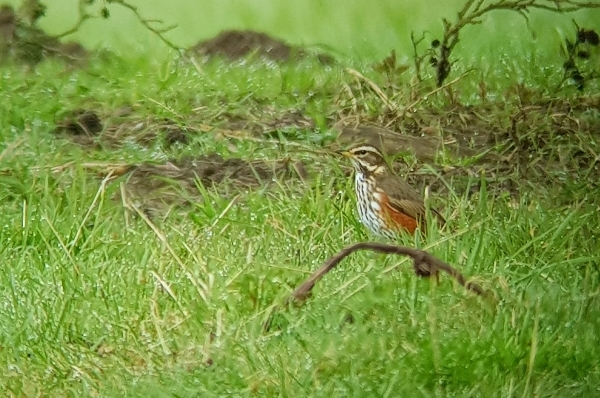 finally I saw the Redwinds on the ground

I also had a close encounter with a very noisy Wren, it was scolding all the time and I’m sure it wasn’t me he was angry with, perhaps a fox, a mink or some other small predator was nearby. 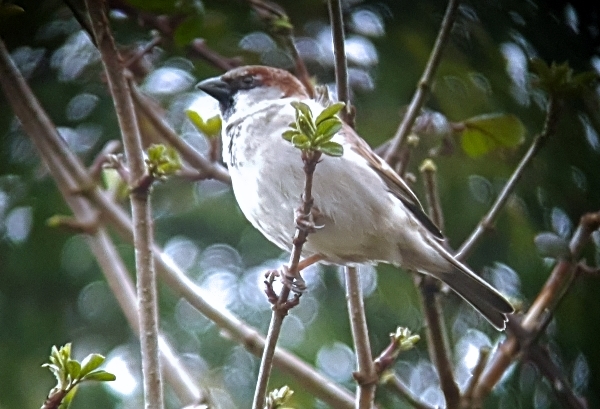 At the confluence of the stream and the River Yeo I spent some time just watching the bushes for movement, it was quite productive there. I saw pair of Goldcrests, then a Chiffchaff appeared low down near the water’s edge, I watched it feeding on insects then I got distracted by a flock of Redwings, they landed not too far away so I took some photographs. I also saw a pair of Coal Tits working their way along the bushes on the bank of the river. 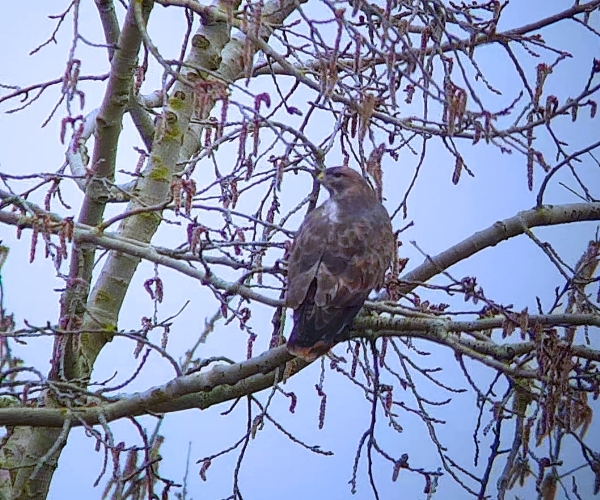 Buzzard in the ash trees across the meadow from my garden

Walking along the River bank I saw a second Chiffchaff, these were most probably summer migrants arriving and not over-wintering birds, I also saw a Common Buzzard perched on a distant fence post.

From then on I never saw much else, I walked around to Rooks Hill and climbed the slope, a Green Woodpecker called loudly and a Great Spotted Woodpecker was drumming in the oak trees. 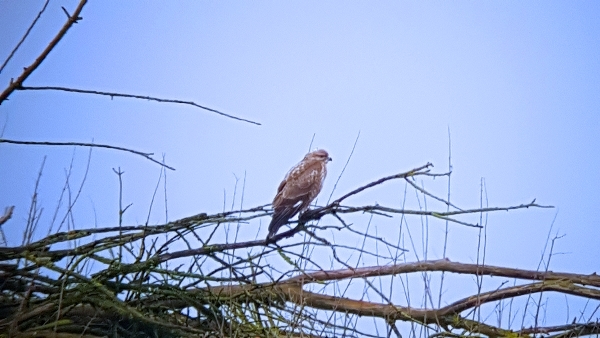 the distant Buzzard seen in the valley

Back at the brambles near the entrance to the valley I found the pair of Long-tailed Tits again, they came very close but too close to digiscope, another pair of Goldcrests worked through the brambles, the male was fluttering his wings in a courtship display.

Back at home the feeders were busy with Goldfinches, Chaffinches, Blue and Great Tits, I also saw Robin, Dunnock and Blackbirds in the garden and my friend Fez came to see me for some food. 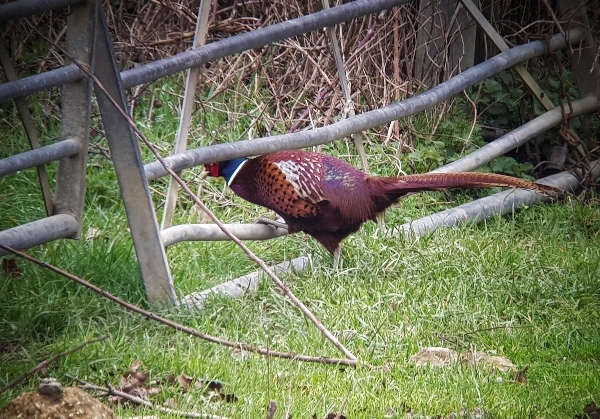 This is Fez - after I fed him he walked into the meadow and down to the gate, the gate leads directly onto to the main road. I'm sure he will end up squashed like the other pheasant I found.

Just before 4pm I had a message about some Sand Martin sightings at Sutton Bingham Reservoir so I jumped into the car and drove the 1 ½ miles to look for them. Sure enough I saw 5 Sand Martins feeding over the west Pool and a bonus was the presence of two pairs of Northern Shovelers in the Northeast corner of the main part of the reservoir. 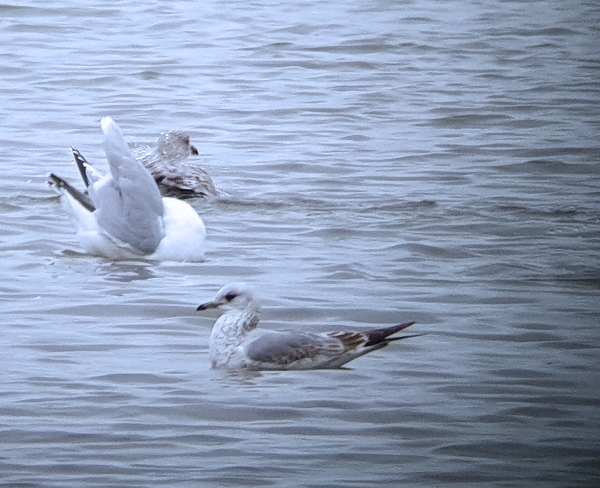 2nd yr. Common Gull with a couple of the larger Herring Gulls

I searched through the gulls on the water hoping for a Mediterranean Gull but there wasn’t one, I did see 9 Common Gulls with the usual Black-headed, Herring and L BB Gulls.

My March list has reached 60 in just 4 days, I am looking forward to better weather and more migrant species coming through.