WEATHER: a glorious day, lots of sunshine, no wind. Temp up to 10C

Once again we had a beautiful clear blue sky with no wind, it was cold and frosty to start with, but it soon warmed up. I left home around 9am, my garden Pheasant was waiting for me, he wanted feeding before I went out, so I threw him some sunflower hearts before I left.

From station lane I turned south and walked through the tunnel to the large grass meadow. I stopped to look at the Magpie’s nest and saw that it looked finished, a thick ball of sticks which will be home to the pair of Magpies sitting at the top of the tree for the next few months. 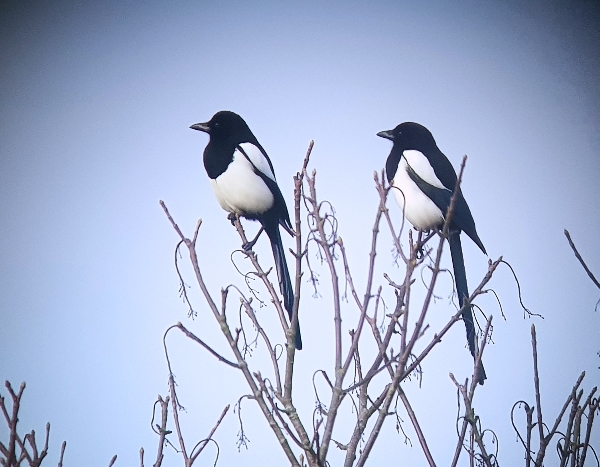 the proud owners of a recenlty renovated, detached home, with panoramic views of Stoford.

The grass meadow held nothing to write home about but I saw a few Redwings fly over I heard a Canada Goose in the distance. The weather was perfect for raptor watching and I particularly wanted to check the air-space over Clifton Woods. I perched on the slope of the fallow field where I had a panoramic view of Cowpool Farm with its sheep fields and the full length of Clifton Woods. 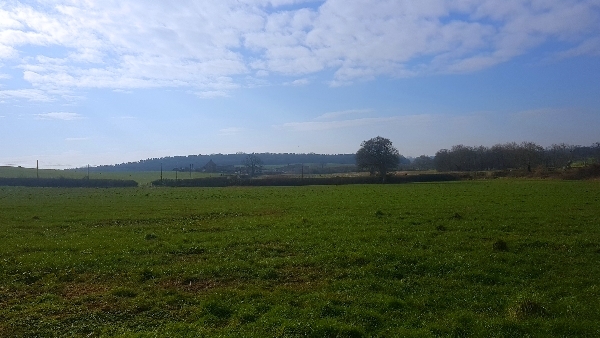 the view from where I stood for an hour or so. You can see Cowpool farm and Clifton Woods which are on the horizon

My main target was Goshawk, the wood was big enough to house a pair of them, so I spent an hour and a half standing on the spot using my bins and my scope. I saw a Raven displaying, he circled on the thermals and took a dive or two, Common Buzzards came up a few times and behind me I spotted a Sparrowhawk also circling on the thermals. 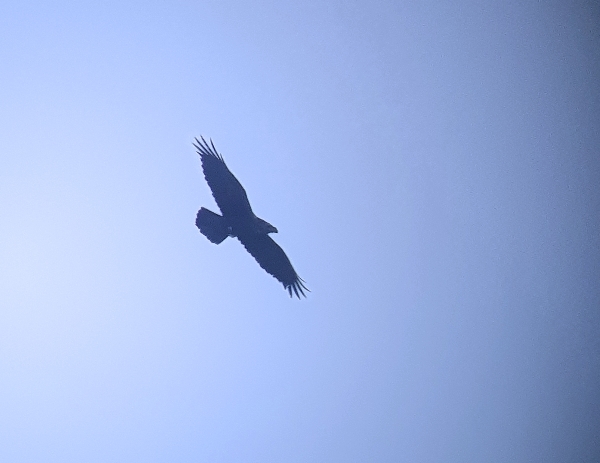 the Raven displaying over Yeo valley

I saw a flock of Linnets whirling around a few times and a couple of Meadow Pipits but not the flock of 50+ that were here yesterday.

I was interrupted several times by local dog walkers whom I have got know very well over the last 12 months, when Tony and Kath stopped to talk we saw a buck Roe Deer in the top corner of the field, a regular sighting in that particular place.

I left my spot around 11am and walked back to north side of the railway track via the woodland along the stream. A Song Thrush sang for a while and I also heard Wren, Robin, Dunnock, Chaffinch and Blackbird. I got back to the lane and crossed it to enter the yeo Valley, I really wanted to stake out the bramble clump hoping to find the nest that I think a pair of Long-tailed Tits are building.

It didn’t take long for the Long-tails to appear and after carefully following their movements I managed to find the half-built nest, both birds were taking small amounts of lichen and moss, and spending time weaving a perfect cup. Eventually the nest will become a dome with a side entrance hole, the birds will collect up to 1,000 feathers to line the nest, an amazing feat. 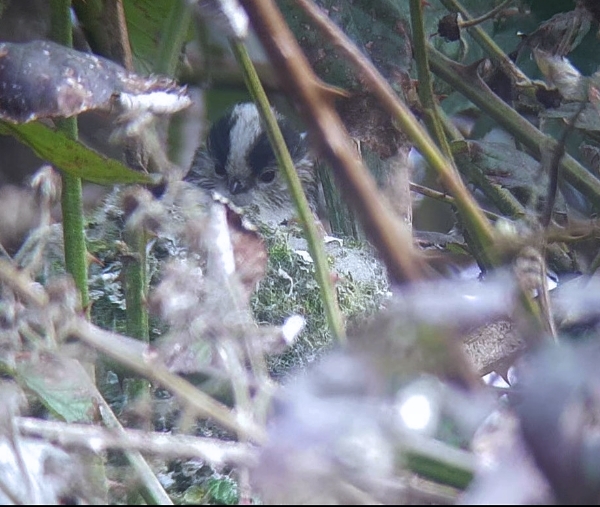 Long-tailed Tit working on the half-finished nest. When complete it will be dome shaped with a side entrance.

I checked the alder trees for Siskins without luck, I only walked a short way into the valley because I had pressing work to do in the garden, I did see a pair of Grey Wagtails on the ruined barns, Great Spotted Woodpeckers were drumming, a Green Woodpecker called a couple times and Pheasants were again quite noisy in the fields on the far side of the stream. 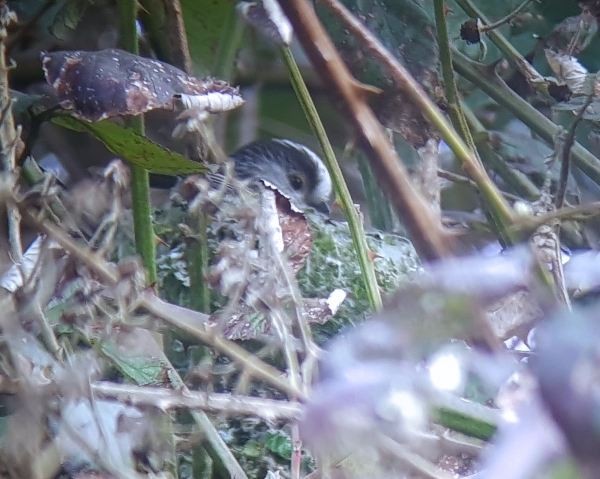 Back at home I finished digging out the new border and then after lunch Dawn and I drove to Beaminster to visit a garden centre  where my wallet was promptly emptied. 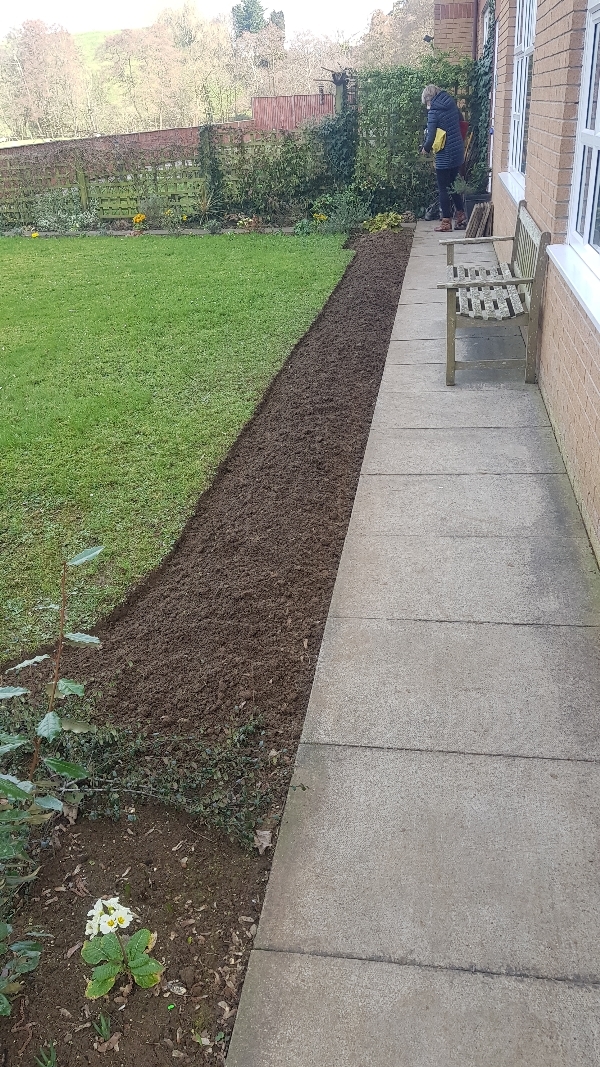 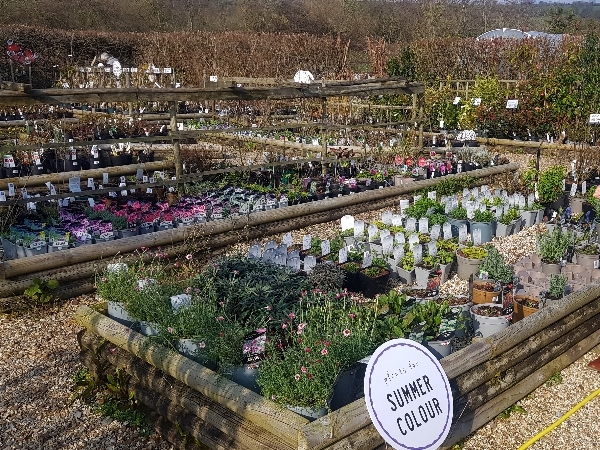 we saw a Sparrowhawk circling over the Garden centre, it could have been carrying my wallet it was so light!!

On the way back home we stopped on the causeway at Sutton Bingham Reservoir, I scope both the West Pool and the main body of the water. I found a pair of Pintails with the large flock of Wigeon, the Pintails were new for the March list. All the rest of the usual species were present including four species of gulls.