The weather was just perfect for a morning walk but I had a lot to do indoors and couldn’t get out there. It was 2pm by the time I finally emerged from the flat. Fez was waiting outside the front door, I had to feed him before I set off.

A brisk breeze had picked up but it was a little sheltered in the Valley, I watched the Long-tailed Tits building their nest in the brambles, I would say that they are about 60% complete. At the first opportunity I peeked at the stream and my first Kingfisher of the month flew from a nearby branch and dashed away, the quintessential turquoise flash disappeared around a bend.

Other than that I saw few species, a Treecreeper was calling from one of the trees that I had seen it in recently and I saw the Moorhen on the stream again. What was noticeable in their absence was Redwings, I never saw a single one, they surely must have been leaving in their droves over the last week or so.

I walked down to the old Kingfisher nesting-bank where I turned around and headed for home. A Cormorant flew over, I saw Pheasants and Red-legged Partridges, I guess that these released birds are no longer being fed by the farmers (the shooting season has been closed for a month (Feb 1st ) so they are now dispersing especially to my side of the stream (hence the appearance of Fez, the Pheasant, in my garden). 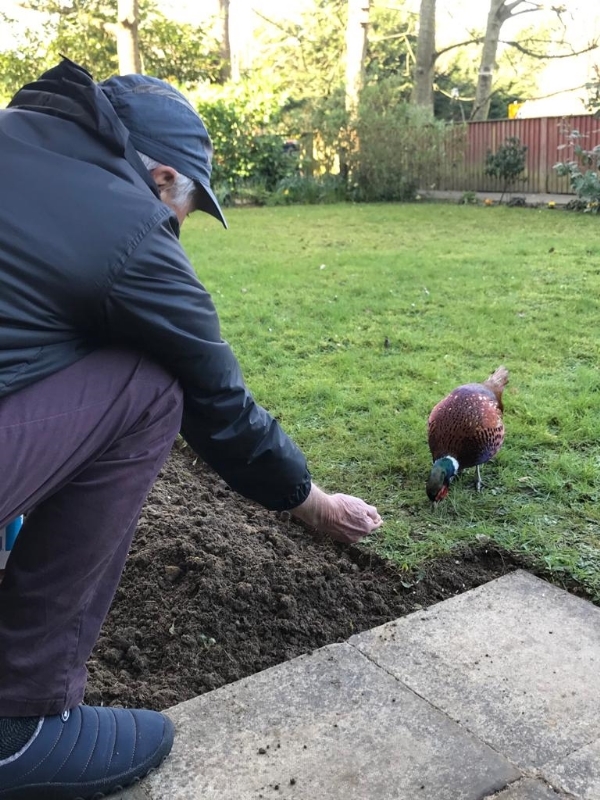 On my way back to the exit track I had another glimpse of the Kingfisher and when I got home Fez was waiting for me. I watched the feeders and listed the usual 6 species.

Persistent blustery wind and driving rain was the order of the day, there were a few dry spells but they didn’t last long. I stepped outside and Fez was waiting by the front door, I spent some time feeding him and for the first time he actually ate from my hand, hoorah, it took him nearly two weeks to trust me! Can’t think why it took so long, can you?

I went for walk, not a birding walk, but I did take my bins of course. A large flock of Starlings, small bunches of Sparrows and a couple of Collared Doves were all seen in Stoford. As I walked down through Barwick I saw a Chiffchaff working its way along the sheltered side of a hedge next to a stream.

My only other sightings of note were made at the lake in the grounds of Barwick House, I saw 4 Moorhens and 4 Little Grebes and that was all! No Swans, Mallards or any other waterfowl. As I got back into my garden I heard a Green Woodpecker calling and later a Great Spotted Woodpecker visited my feeders.