It was just after 9am when I left home, it was still windy and it still felt really cold, when is the ‘real’ spring going to arrive? I walked round to the valley and started watching the bramble clump for Long-tailed Tit activity around the nest site, almost immediately both birds flew in and I scoped the nest. To my surprise they had not progressed very much further than the last time I looked, I half expected the nest to be finished but they haven’t put the roof on yet, perhaps the poor weather has held them up.

I continued down into the valley following the course of the stream, a pair of Grey Wagtails flew over me and and a pair of Red-legged Partridges flew up from the grassy bank at the side of the stream. A Great Spotted Woodpecker was drumming ahead of me and as I approached, it flew off down the valley.

I only walked as far as the old Kingfisher nesting-bank which is exactly a mile from home, I saw a couple of Redwings and a Blackbird fly out from an ivy-clad tree and that was about the sum total of my sightings in the valley.

From the entrance/exit gate I walked across the lane and took the track south which led me into the woodland along the stream, after about fifty meters I heard my first ‘patch Chiffchaff’ of the year. This bird was very mobile, he would only stay still to issue one verse of song before moving on, in between verses he was chasing flying insects. It took me ages to get a picture of him sitting still and even longer to get a shot of him with his bill open in full ‘chiffchaff’ mode. ( for my overseas readers who have never heard a Chiffchaff sing, the last statement is a reference to the Chiffchaff’s song which is a monotonous repetition of its name). 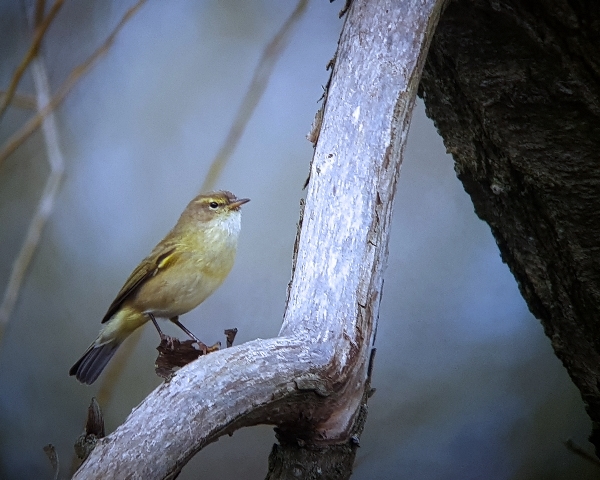 Common Chiffchaff, back on the same territory as last year. 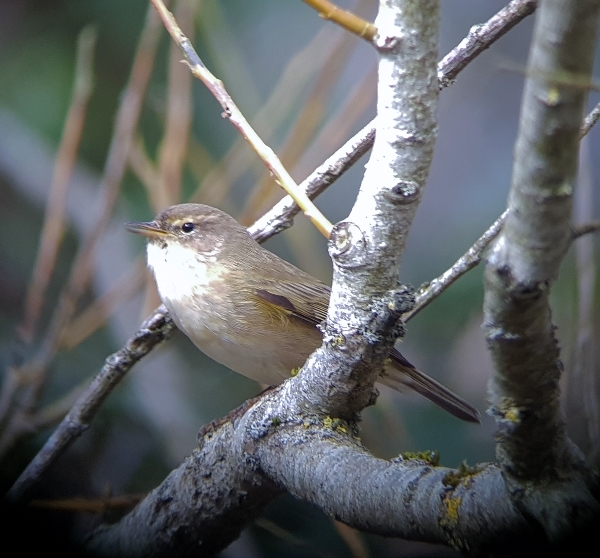 the same bird in different light, just shows you how useless the phone cameras really are 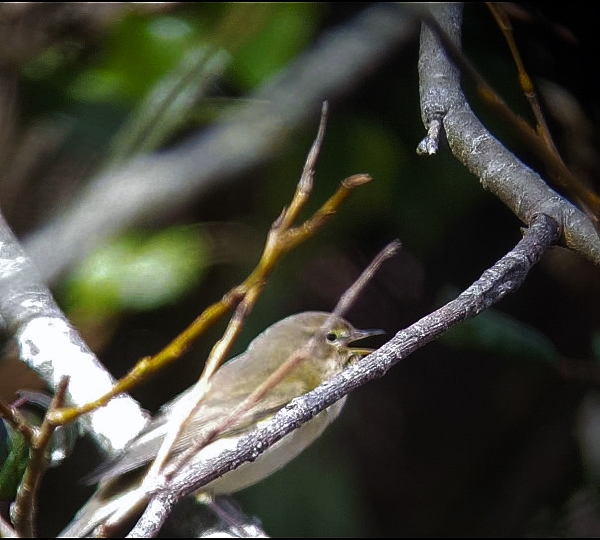 the same bird in song, it took ages to get this one.

I continued my walk to the large fallow grass field that overlooks Cowpool Farm, I set up my scope and scanned the sheep fields for Wheatears and the sky for raptors, none of which appeared. For the return trip I took the path that leads you through the large grass meadow above the woodland, there wasn’t much to see in the field, just a pair of Crows but the Magpies were near their nest and I saw a Bullfinch fly off along the hedge.

My last sighting was of a Coal Tit, it was calling from high up in an ash tree and was easy to photograph because it wasn’t moving around much. 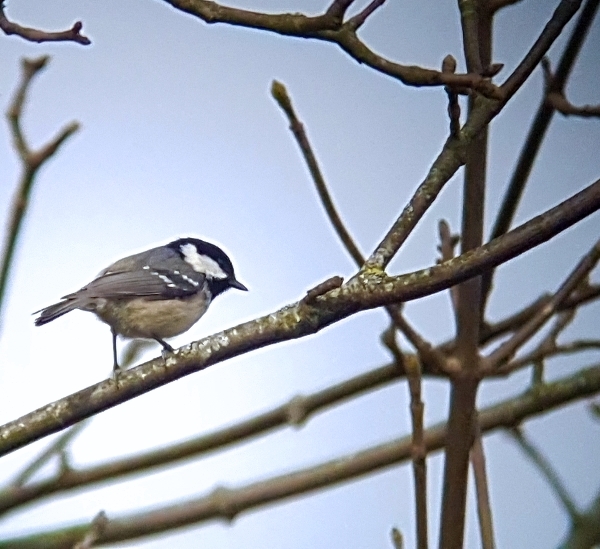 the Coal Tit my last sighting of the walk.

Back at home I had to feed Fez a couple of times, he fed from my hand and was happy to return a couple of hours later to do it again. The feeders were busy, I have moved them all to our fence near the front door because I wanted them away from the nest box that the Blue Tits have taken over. It took about 5 minutes for the Great Tits to realise the new siting of the food and the rest soon followed. I have noted that the male Great Spotted Woodpecker will come to the new site of the feeders but the female is still reluctant to do so.