WEATHER: despite the weather forecast of a bright sunny day just didn’t happen, we had hazy sunshine to start then it clouded over and it was still quite cold. Temp 8C

Dawn and I set off at 9am and walked towards Cowpool Farm, from the lane we walked under the railway line and into the large grass meadow, we saw the two Magpies attending their nest and we saw Fez, our friendly Pheasant in the meadow. He approached us but we didn’t have any food for him. 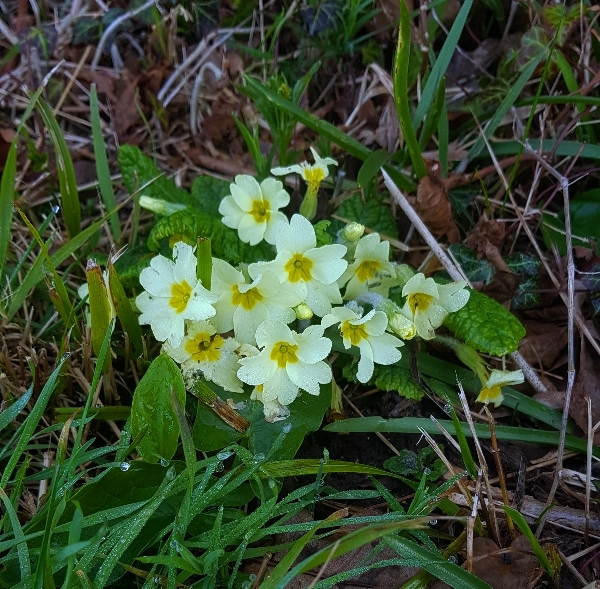 the Primrose, brightens up the tracks along the edge of the fields

A pair of Jays was our next sighting, they didn’t stay long and all we saw was their white rumps disappearing into the wood. We heard the local Chiffchaff singing, I had photographed him the other day and a small party of Redwings flew over us, we could hear a Song thrush singing from the woods and the returning Chiffchaff was again in full song.

As we walked along the concrete track to Cowpool Farm we watched a flock of about 50 Linnets but apart from corvids and pigeons we saw nothing else in the sheep fields except for sheep of course. 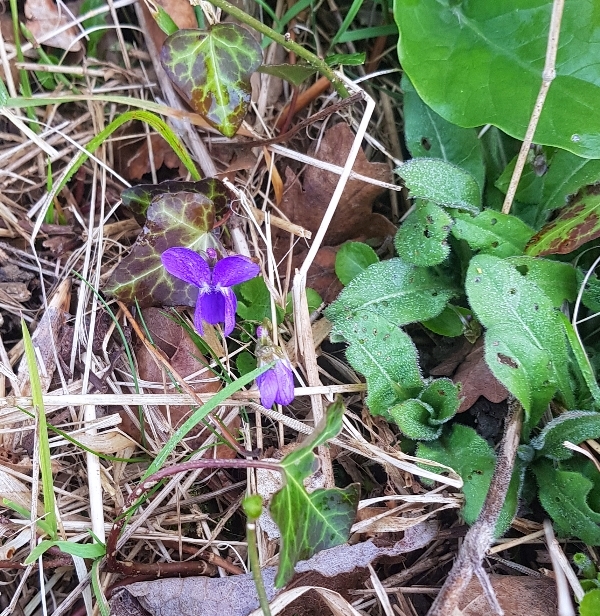 The Common or Dog's Violet another little early spring beauty

We walked along the western side of Clifton Woods having watched a pair of Common Buzzards circle above us and we turned a corner we viewed large crop field belonging to Frankham Farm. These are chemical free fields and you could tell by the sound of Skylarks and the edge of the woods was alive with bumble bees amid a host of primroses and other flowering plants. I remember from our walks last April that how surprised we were with the number of wild flowers in this area. 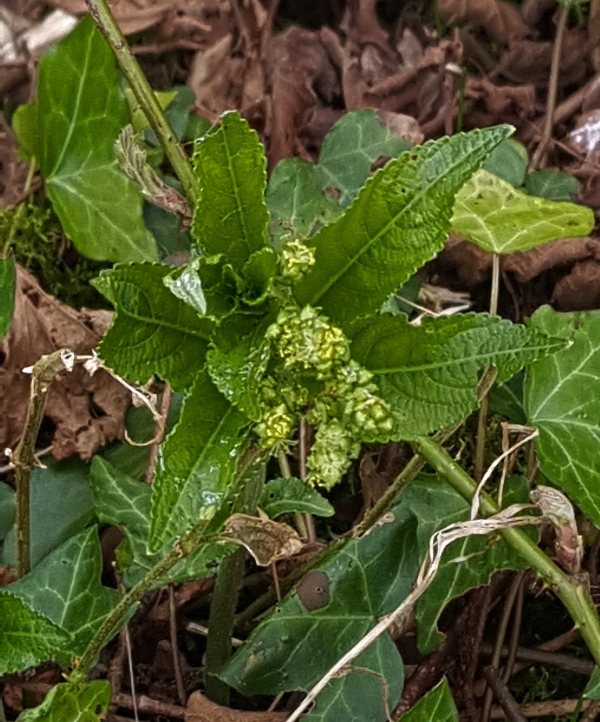 Dog's Mercury (Mercurialis perennis) is what is called an indicator species, meaning it helps to date the woodlands that it grows within. ... There is not all that much known about the toxic substances within the plant, although saponins and methylamine (mercurialine) are thought to be present.

There were Primroses, Celandines, Dog Violets, Wild Strawberry and Dog's Mercury all in flower (you can’t really call the Dog's Mercury a flower can you?

The number of birds flitting around and flying overhead was further proof that we were walking through an Eco-friendly farm, dozens of Linnets and Chaffinches flew over us and the hedges held many Robins, Dunnock, Blackbirds and Wrens. 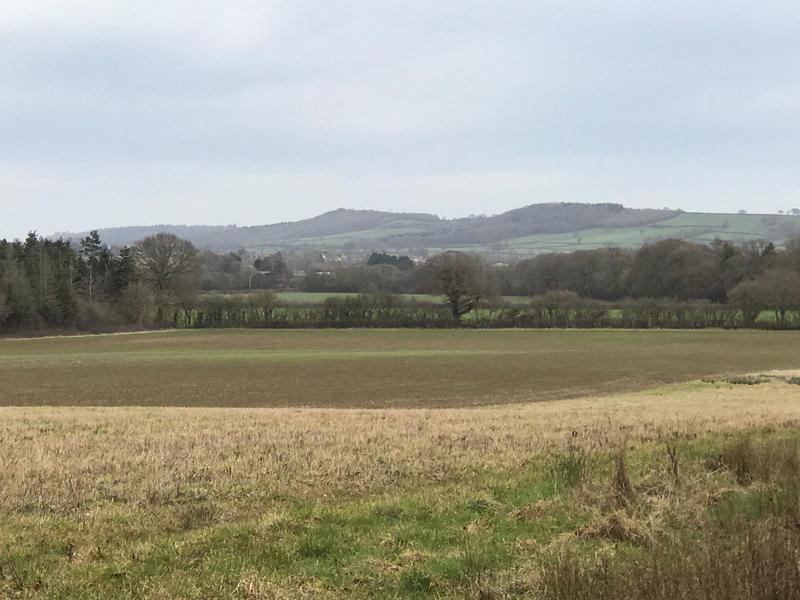 part of the Frankham Farmland

We have permission from the Farmer to walk on the land of Frankham Farm and we planned to visit a set-aside field that had been planted with many plants which produce a bounty of seeds, there are Linseed, Mustard, a Kale/Rape hybrid, Camelina, Phacelia and Yellow Trefoil. 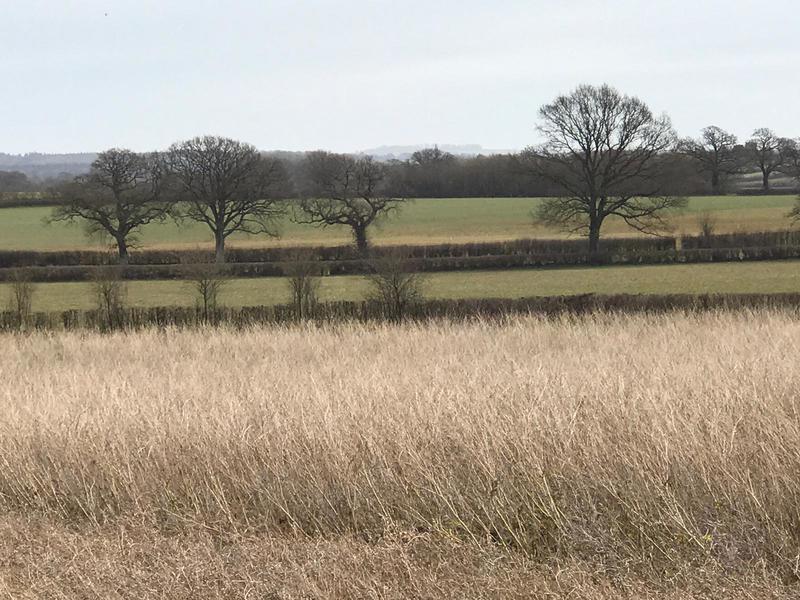 the set aside field, all the plants are now in seed 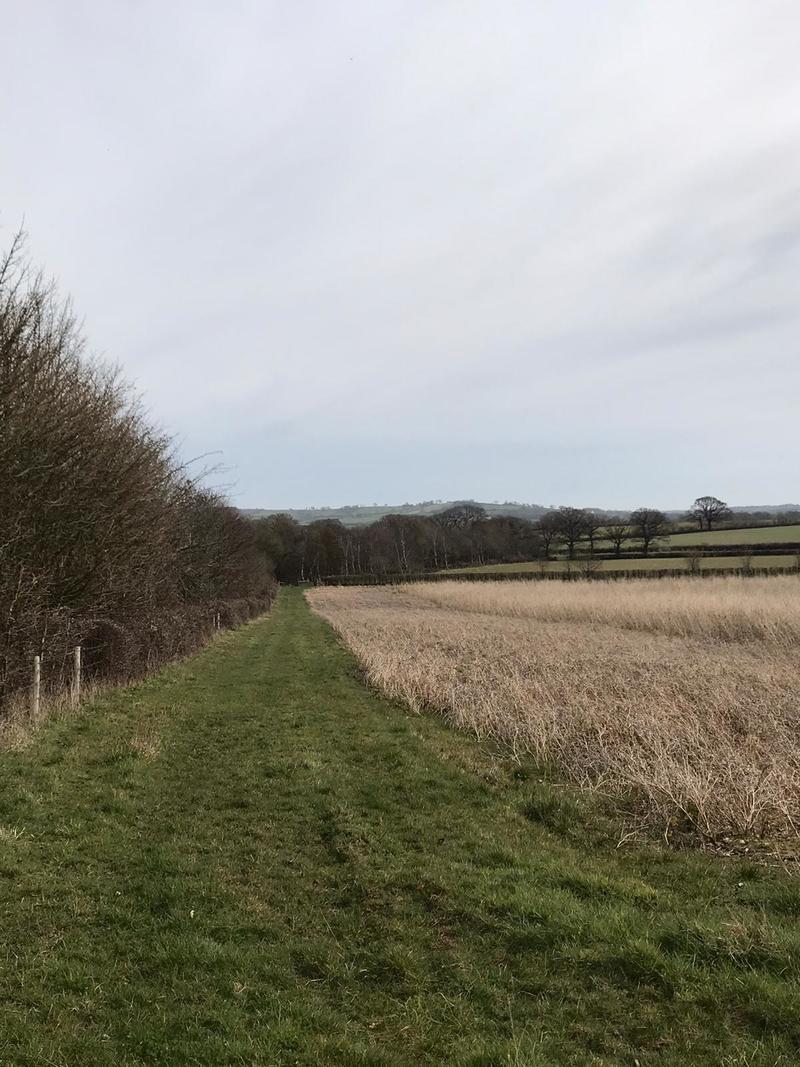 along the egde of the set-aside 'bird-seed' field

The number of birds in and around the field was unbelievable, I haven’t seen so many Linnets in one place for many years, several flocks were flying around and landing in the set aside field. I estimated that around 600-1000 Linnets were presently feeding and many more were sitting in the trees all around us. This has to be a county record number if not a national record!! 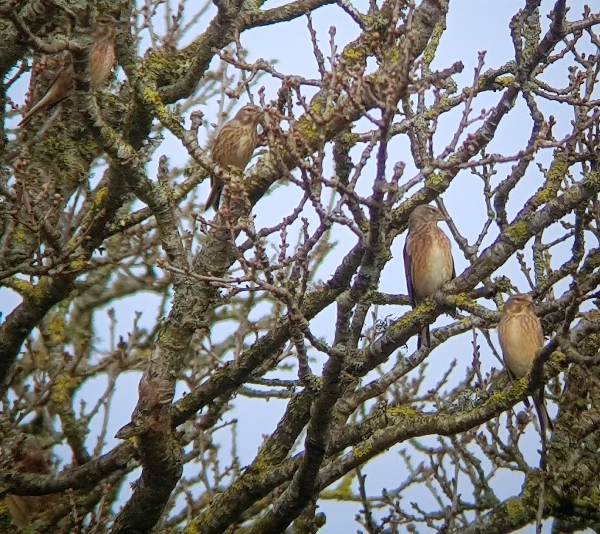 The noise from the flocks in the trees was really loud. I photographed one of the flocks in the air above the field and later counted the dots, there was 302 Linnets in that one flock alone!! Many Chaffinches were also feeding in the field, but I only saw 50-100 of those, I was hoping for a Corn Bunting or Yellowhammer or even Reed Buntings but I fear that I am a little late in the season to see any of those. 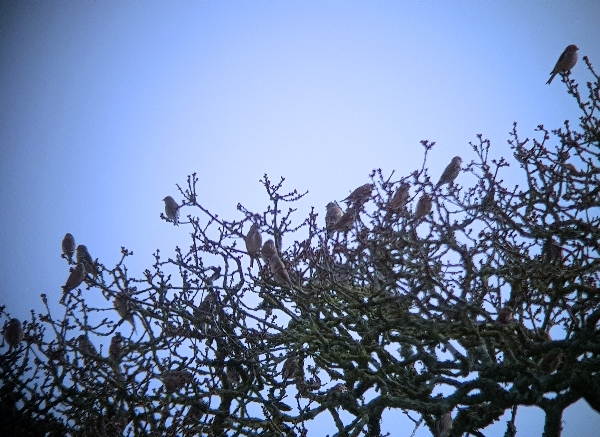 We stayed an hour watching the flocks, suddenly the noise from the trees stopped, I think the birds must have flown off somewhere, maybe a predator was lurking around. Just after, when we were walking back to the public track a Sparrowhawk flew over us carrying a Linnet-sized bundle in its talons. Maybe that was the cause of the silence and dispersal of the Linnets? 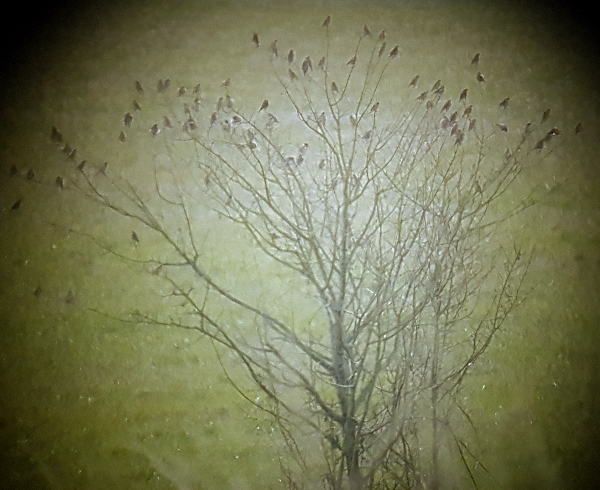 Our walk back produced very few new sightings, we stopped to look for Skylarks in the large crop fields and saw one lark descending, we heard a Great Spotted Woodpecker drumming and a Green Woodpecker ‘yaffling’.We also saw a few Redwings flying over and a few more in the sheep fields before we got back to the stream and home.