WEATHER: yet another dull and overcast day, but the wind had gone, just alight breeze which gained strength in the afternoon. Temp 10C

I had a wonderful walk this morning it was so much better without that very cold breeze. I walked to Clifton Maybank by taking the path under the railway line and up to the large grass meadow. I took pictures of the Magpies sitting near their large nest of sticks and talking of sticks a Grey Heron flew over me carrying a mouth full of sticks, I watched it fly over to Clifton Woods where the nearest Heronry can be found. 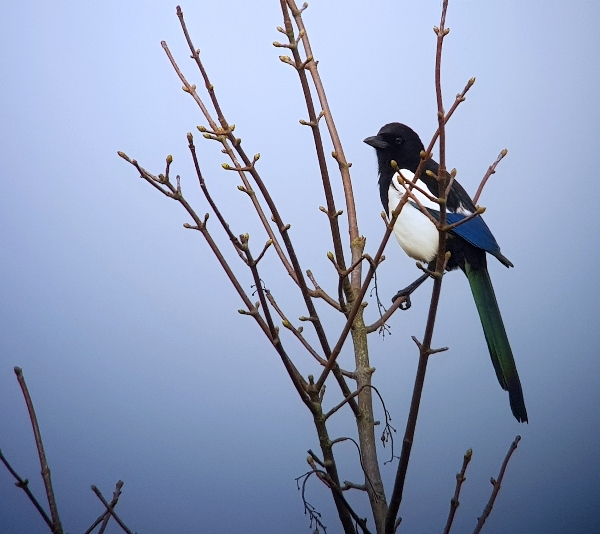 I also noticed that a Starling was perched on a telegraph pole near the hole it used for nesting last year, when I scoped the bird, I saw that the nest-hole had recently been blocked up by the electricity company, it had been plastered over!! The poor Starlings are now homeless, whilst I was looking, a Great Spotted Woodpecker landed very near the blocked nest, I am not sure if the ‘plaster’ will be there for long! 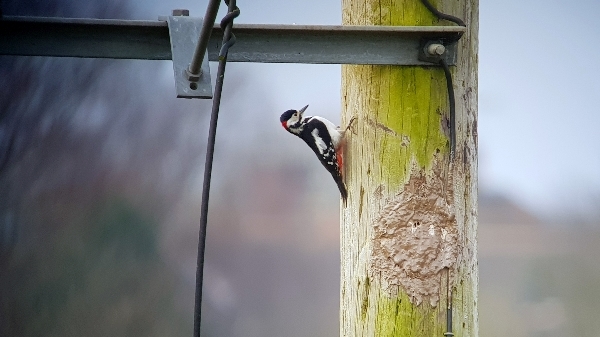 Great Spotted Woodpecker, you can see the plaster, covering the Starling nest-hole 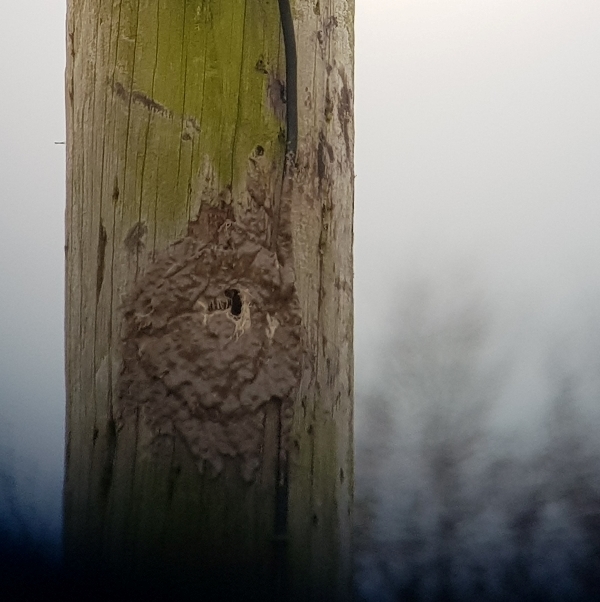 this is the covered nest-hole later in the day, you can see that something has already broken through the covering!!

I walked up the the large grass meadow and bumped into Fez, my tame Pheasant friend, he responded to my call but I didn’t have any seeds for him. The walk along the meadow to Clifton House produced many common species but nothing too exciting to report. 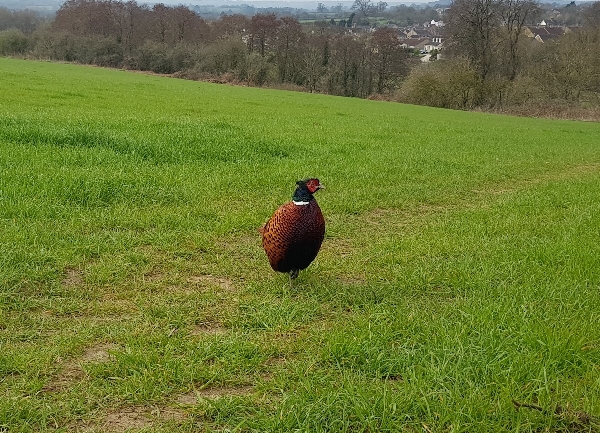 Fez was in the meadow when I got there

At Clifton Maybank I walked through two meadows where I followed the course of the River Yeo to the village of Bradford Abbas, I saw a pair of Green Woodpeckers on a distant pole, a couple of Chiffchaffs along the river, a Song Thrush was singing and the Rookery nearby was very noisy. 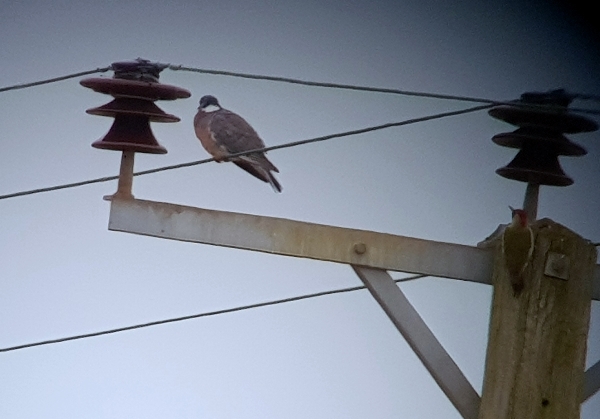 record shot of a Green Woodpecker with a Wood Pigeon

At the edge of Bradford Abbas I stopped on a footbridge to watch the river for a while before I turned around and walked back to Clifton Maybank and instead of heading back home I turned onto the concrete track that passes Broadclose Farm and takes you up to Clifton Farm. I love this track, there are lots of birds and plenty of wild-flowers along the hedgerow and grass verges. I walked beneath a large Rookery which was incredibly noisy. A pair of Buzzard alighted from an ancient oak tree and I saw 4 Little Egrets in the cow fields. 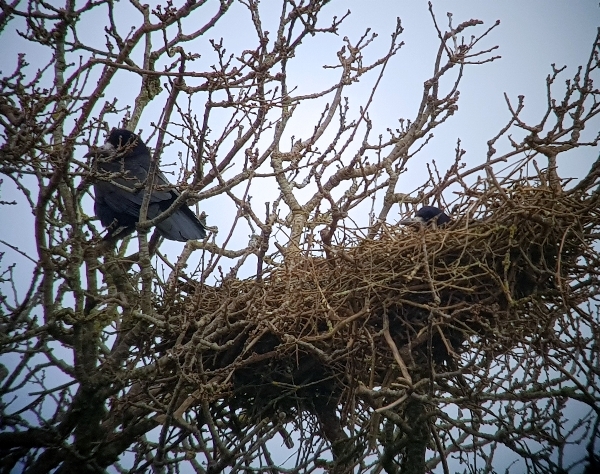 From Clifton Farm which sits on the top of a rise I had a commanding view of the fields down to Bradford Abbas and across to Thornford and beyond. A Good section of Clifton Wood is also visible from there and a I saw several more Grey Herons flying to and from the woods, I could not see any of the nests in the Heronry. 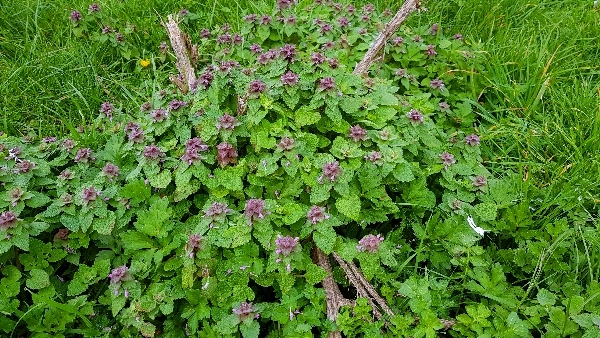 a patch of Red Dead Nettle

I searched a number of pylons for a possible perched Peregrine without any sightings, I saw Chaffinches, Pied Wagtails and a few House Sparrows around the farm and as I walked back along the track a Chiffchaff was singing which I also saw. 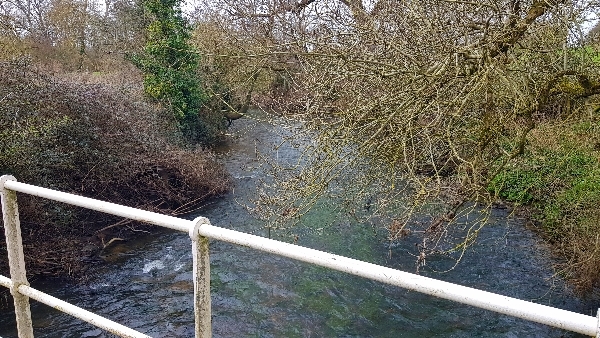 the river Yeo at Bradford Abbas from the footbridge

Back in the large grass meadow near Stoford I noticed Fez was still there and that the blocked ‘Starling hole’ had been damaged by either a Starling or a Woodpecker. Before I went home I took a quick look into Yeo Valley to check on the Long-tailed Tit’s nest, it now looks finished, but I didn’t see any activity. 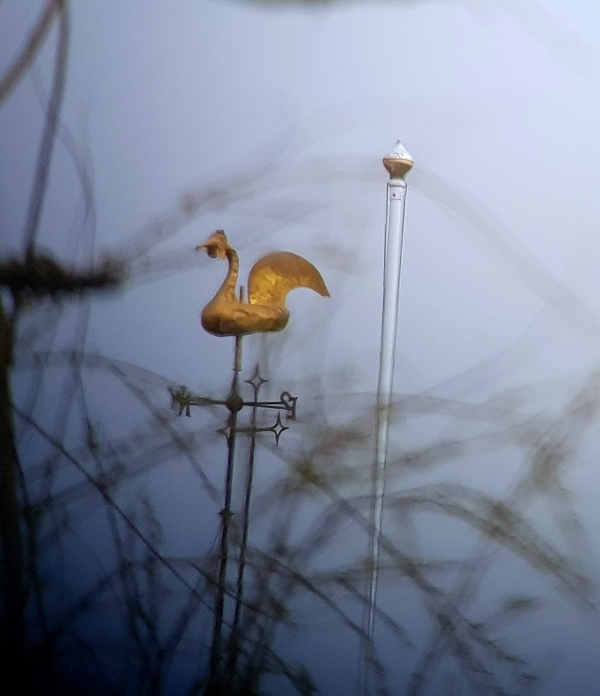 the 'golden cockeral' weather-vane on top of the church in Bradford Abbas, a new bird for the month list

Late afternoon (4pm) I drove out to Sutton Bingham Reservoir, unfortunately the yatching club was now open and dozens of Mirrors were sailing around the main part of the reservoir. I drove down to southern tip and had about  10 minutes there before I had to leave and the gate was locked. I saw all the usual birds on the water, the Wigeon flock had been disrupted by the boats and were much closer at the southern tip. 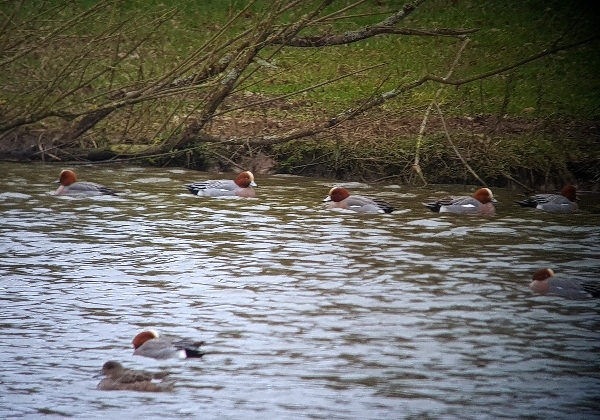 Before I left I decided to take a walk at the very southern boundary of the land owned by Wessex Water, a public footpath takes you down to some woodland where a stream runs into the reservoir. As I walk down the slope through a meadow towards the woods, I saw two Common Snipes fly up from a reedy patch ahead of me. These were the first sighting of Snipe in March and made it onto my list at number 72. 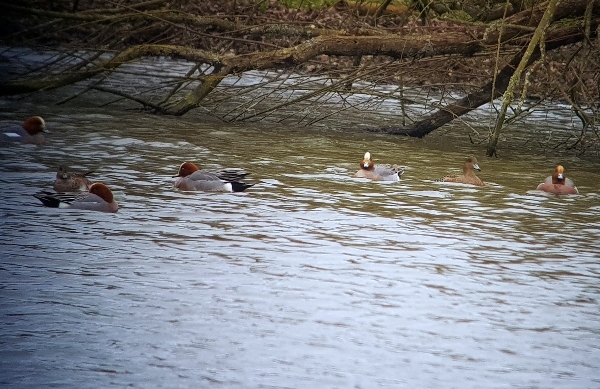 No other birds of note were recorded so I went home as the light began to fade and the temperature dropped.