Dawn and I drove 11 miles to West Moor, I know it is off piste, but we had to recce the area for upcoming work (if we are allowed to run trips in May and June) so technically we were working. We had to check out tracks and trails and their accessibility. We arrived around 9am and headed straight onto the Moor from the northwest side of Kingsbury Episcopi near the village of Thorney. 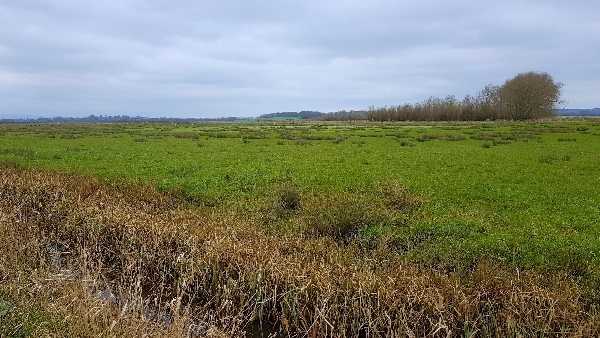 West Moor from the main track

A muddy track brought us out onto the moor within minutes, some of the tracks were negotiable with care and boots and we soon found a few birdies to look at.  We could see a bunch of Egrets not too far off, I counted 7 Little Egret and 11 CATTLE EGRETS (a tick for March), we also saw a Grey Heron, a few Cormorants some Mute Swans and several Stock Doves were flying around or calling from the trees. 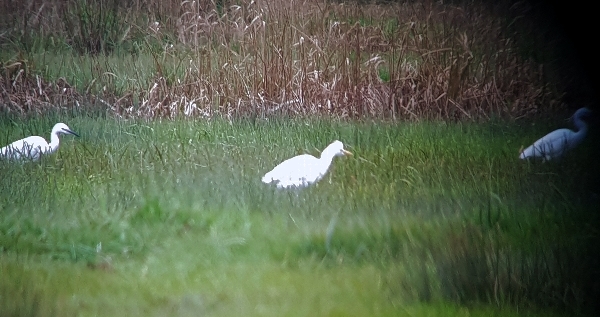 We couldn’t get close to the Egrets because first, a pair of joggers flushed them, then a couple with four dogs made them fly off even further. The main track was impassable with just boots on so we turned off and walked eastward. We walked along a water filled ditch and Dawn spotted some movement in the water, it was a Toad, we then found several more, many were mating (I used to call them double-deckers as a kid), these were our first amphibians of the year!!! 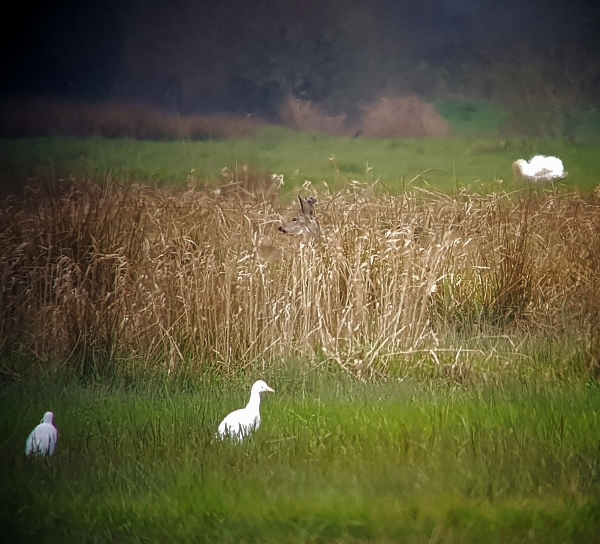 can you see a Roe Deer in this picture?

We could hear Skylarks singing above us and we found a single male Reed Bunting just ahead of us. Scanning the Moor with the scope I tried to pick out Common Cranes, I couldn’t hear any and none appeared in the scope. I did see Buzzards on posts, Cormorants in trees and on a gate! Also, Canada Geese, Mallards, a Moorhen and several groups of Roe Deer. 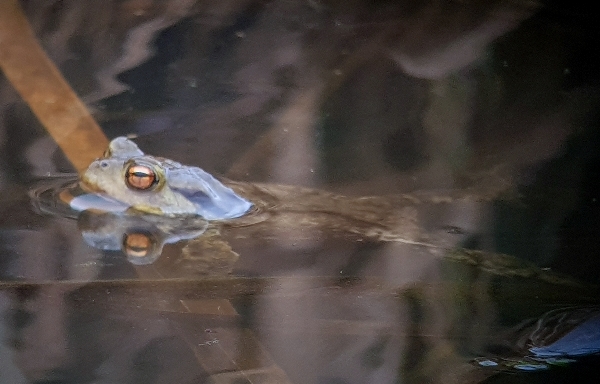 A few Herring Gulls few over us and we saw a few Lesser Black-backed Gulls in a field, but to find the Cranes we needed to walked a lot further onto the Moor, perhaps we will return when it gets a little drier out there. Other sightings included a Great Spotted Woodpecker, Chaffinch, Stock Doves calling and a distant Green Woodpecker ‘yaffled’. We stopped to listen to the mimicry of a Starling, it was amazing, it produced many calls of other species: we picked out House Sparrow, Chaffinch, Common Buzzard, Curlew, Green Woodpecker and Reed Warbler, but I’m sure there were others too! 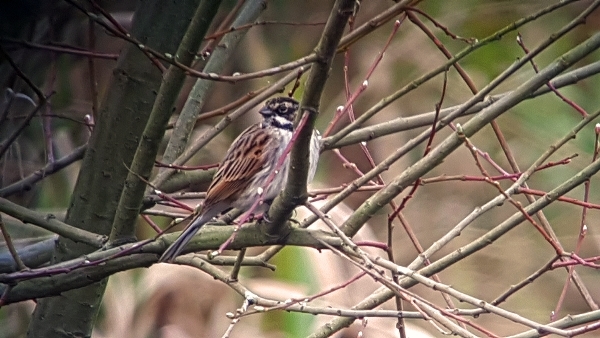 a male Reed Bunting, not quite in summer plumage yet

We left after an hour or so and headed back home, a Kestrel on a telegraph pole was my first sighting of one for quite a while, the female that had over-wintered in Yeo Valley seems to have left the area now.

We went out for our afternoon village walk just after 3pm immediately after news of a WHITE-TAILED EAGLE hat had been seen circling over Yeovil by a few people. Stoford sits in a valley and so looking northward to Yeovil is a waste of time from where we are because we cannot see much sky. We walked to the top of Barwick and Stoford near the A37 and stood there for a while but I’m afraid the bird had gone.

We walked back down the hill into Barwick Village and then onto Barwick House to look at the lake where we saw the usual Mallards, Little Grebes and Moorhens. We had sightings of both Green and Great Spotted Woodpeckers and more Buzzards.