Things are definitely coming alive now, more flowers are appearing, more birds are in song, more species are returning to traditional nest sites and lots of pairing-off is occurring. I missed Fez this morning because I was out early again (Dawn fed him whilst I was out).

From the lane I turned south and walked under the railway bridge to the woodland that lies along the stream, I had a quick look at the Starling nest hole that had been blocked up by the Electricity company and saw that no further damage had occurred so I assume that they have abandoned it. 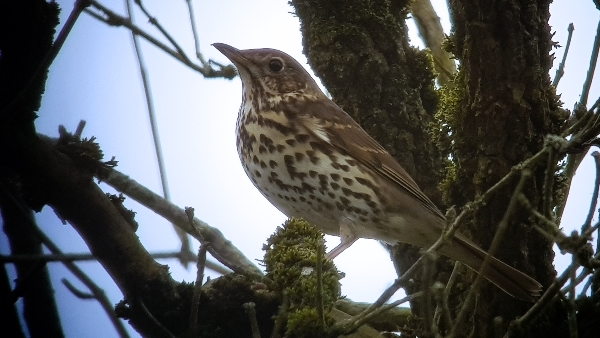 the Song Thrush in the woodland

My first sighting in the wood was that of a Song Thrush and then a Chiffchaff burst into song a little further ahead. At the first point where the path reaches the bank of the stream I saw a Kingfisher dash upstream and out of sight. No further significant sightings were made in the woods and where the path leads you out to the set-aside meadow I set up the scope to scan the sheep fields around Cowpool farm and Clifton Woods.

The lack of Redwings was remarkable, most have gone now but there are usually one or two that linger into late March and early April, in fact

The fields were quite empty except for the usual Wood Pigeons, Crows, Rooks and Jackdaws. I walked back to the lane via the grass meadow above the wood and saw a pair of Buzzards, another Chiffchaff, a Great Spotted Woodpecker and the usual common species.

From the lane I entered the Yeo Valley track via the stile, after 50 meters I stopped to watch a pair of noisy Jays, these were my first sightings in March, unbelievable really for such a common woodland bird. I sae the Long-tailed Tits taking feathers to line their nest in the brambles and a Raven cronked further ahead. 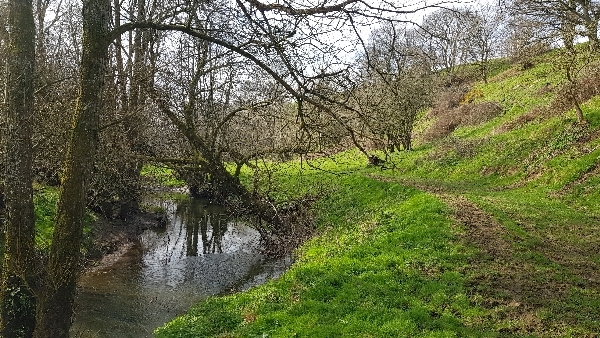 the River Yeo and the slope of Rook's Hill

I walked the complete circuit of the valley including the slopes at the back of Rook’s Hill, I counted 5 more Chiffchaffs in song and the pair at the confluence of the stream and the river were chasing one another around. During this part of the walk I saw Goldcrest, a pair Mandarin Ducks that flew up from the River Yeo (let’s hope they stay to breed). I also saw two pairs of Grey Wagtails during my walk, one pair on the river and the second pair were along the stream and I also had a second viewing of a Kingfisher. The most astonishing sighting was that of four more Jays!! Two pairs by the looks of it and one pair where chasings the other pair away, that’s six Jays in one day, I think I will have to sit down for a while and take it all in!! Ha! 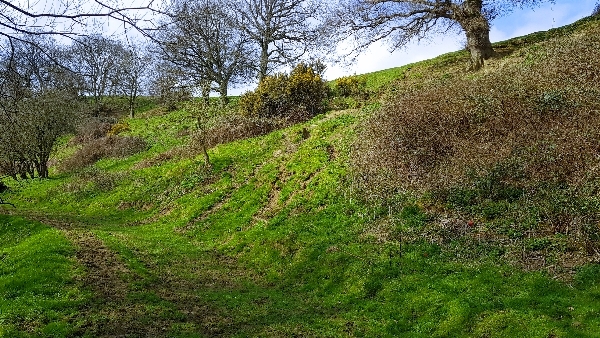 On the return journey a male Grey Wagtail was singing from the roof of the derelict farm buildings it then moved to the top of a nearby tree? Last year a pair nested inside the buildings and by the looks of it they will be again this year, a good plus in their favour is that the farmer has bricked up all entrances to the old buildings so they will have a peaceful breeding season. 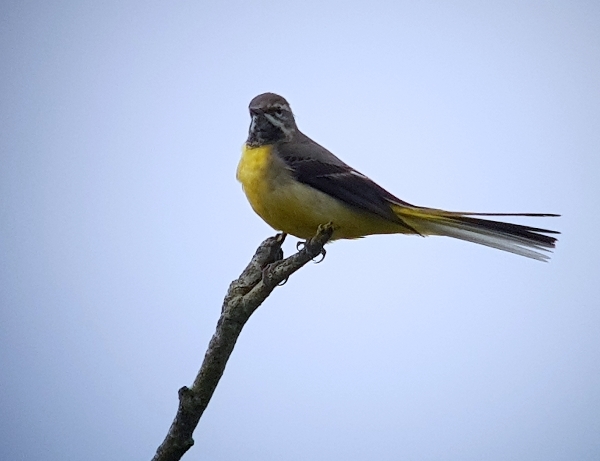 Grey Wagtail at the top of an oak tree

Back in my garden I watched the usual species coming to the feeder, the Blue Tit was singing a lot from the sycamores and a Goldcrest burst into song from the Leylandii across the road which lasted for about an 1/2 hour. A Grey Squirrel continues to raid my feeders and scoffs everything in sight and Fez returned for his afternnon meal. 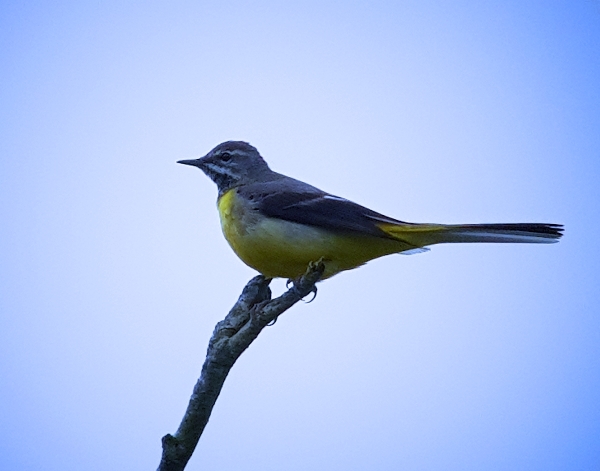 There wasn’t an afternoon walk I had chores to do both indoors and out, Dawn weeded the borders whilst I washed the car inside and out.