ALL DAY VISIT TO WEYMOUTH AND FERRYBRIDGE

Wow, what a fantastic day! The weather was just gorgeous, a beautiful day and we got to see the seaside again, it was also a great day’s birding despite ‘dipping’ on my three main target birds!

There was three ‘good’ birds to be seen in and around Weymouth yesterday so Dawn and I set out this morning to look for all three of them and also a lot species missing from my year list. We set out just after 8:30am and arrived at RSPB Radipole Lake at 9:15am. We parked the car in the free car park besides the tennis courts where a viewing platform allows good views of the main body of water on the reserve. 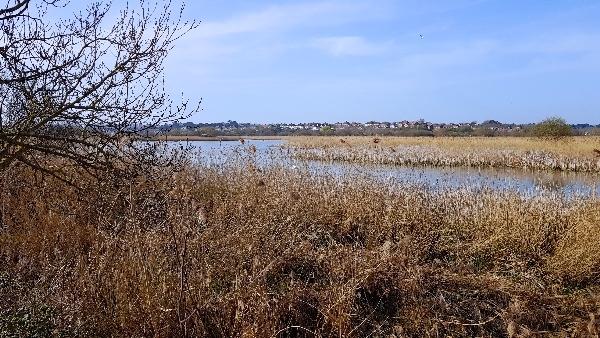 A Ring-necked Duck showed very from this site yesterday, however after searching for nearly an hour with other birders present we could not see it. Despite this mishap we saw a good variety of species from the platform and added 6 to the March list, we saw Gadwall, Mallard, Shoveler, Tufted Duck, Common Pochard, Common Shelduck, Little Grebe, Marsh Harrier, Cetti’s Warbler, Mute Swan, Coot Moorhen, Common Kestrel and dozens of Sand Martins. 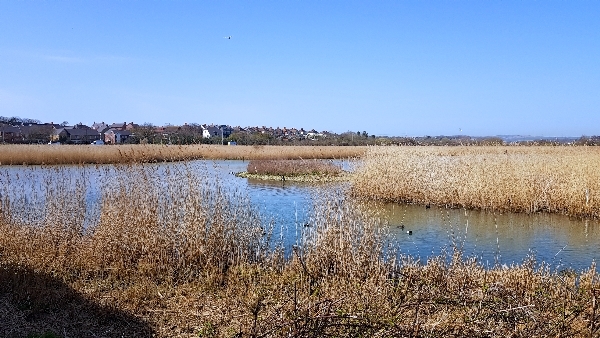 another view of Radipole Lake

From Radipole we walked to northern edge of Lodmoor near Weymouth Rugby Club, we found the spot of rough ground where a Desert Wheatear was showing well yesterday. Guess what? The bird was nowhere to be seen, we saw Meadow Pipit, Greenfinch, Green Woodpecker and at least three more Marsh Harriers but no Wheatears. We saw Chiffchaffs on several occasions during the walk down to Lodmoor RSPB reserve and lots of common species. 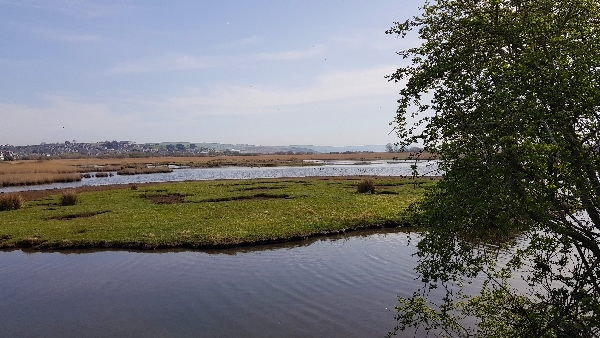 We got onto the western track that runs parallel to the marshes at Lodmoor, it was getting nice and warm and the breeze had all but disappeared, it felt like summer. A Brimstone butterfly flew past us, Small Tortoiseshell and Peacock Butterflies were also noted and two Red Foxes sat on the side of hill in the distance. 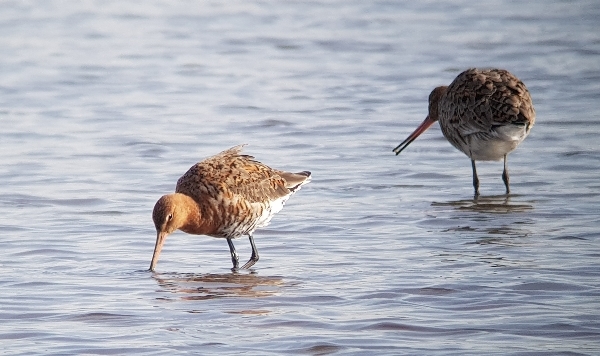 On the marshes at Lodmoor a Laughing Gull was present for a few hours yesterday, why is it always yesterday? He didn’t show up today but who cares we had a wonderful time watching the birds that were there. A nice flock of Black-tailed Godwits was very obliging some of the flock were sporting their summer plumage. 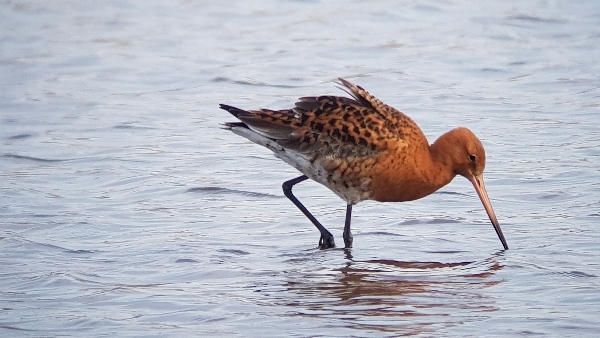 We also saw Little Egret, Common Snipe, Mediterranean Gull, Lapwing, Common Shelduck, Eurasian Teal, Shoveler, Gadwall and Mallards. We had a few more glimpses of Cetti’s Warbler and we saw more Chiffchaffs. We ate our picnic lunch sitting on bench in lovely sunshine whilst searching for the Laughing Gull which did not show up. 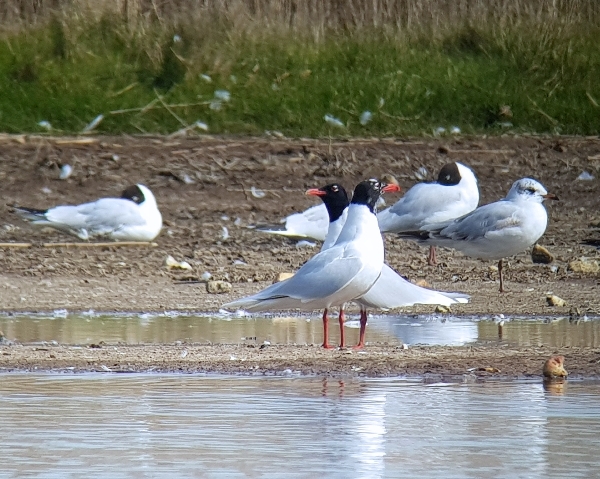 a pair of Mediterranean Gulls in courtship display 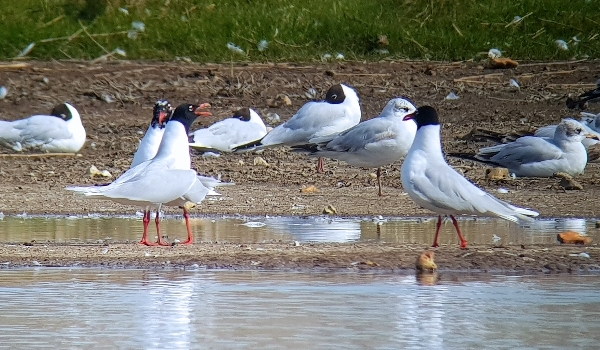 and here an interloper is approaching

From Lodmore we crossed the main road on the southern border and walked along the seafront into Weymouth Town Centre, is was quite crowded but everyone seemed to be keeping their distance. Once in the town we made our back to Radipole Lake taking a route along the harbour to the visitor’s centre at the reserve. 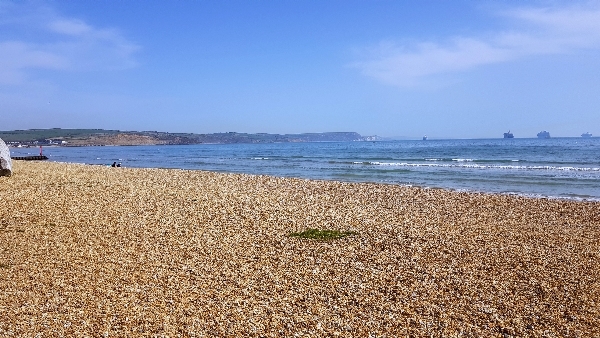 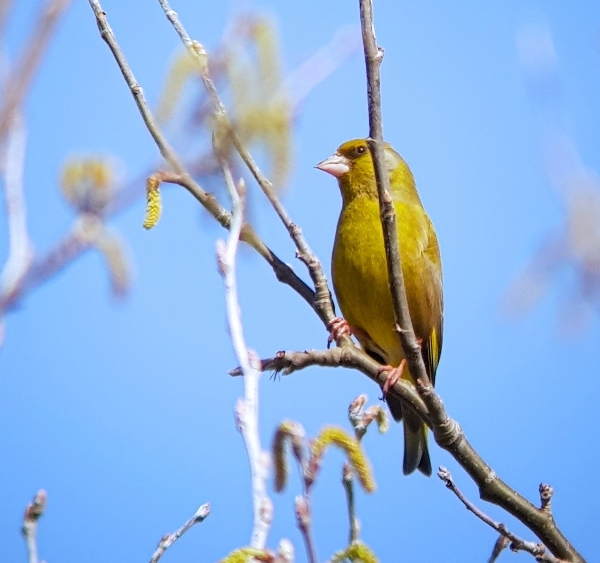 The little humped back bridge near the visitor’s centre at Radipole gives you good views of the main pool and reedbeds and from there we saw many of the species already on our list. The walk back to the car at the tennis courts was along the eastern side of the reserve and we searched for the Ring-necked Duck all the way back to the car without any luck. We did find a Willow Warbler along this path. 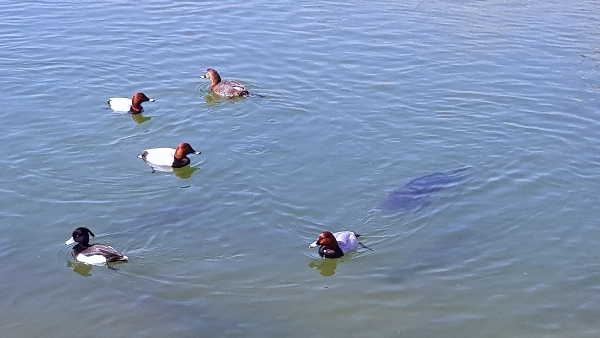 Common Pochard and Tufted Ducks, can you see the very big fish stalking them?

The day went downhill from there! We drove out to Ferrybridge,which is the Reserve which lies on the causeway between Weymouth and Portland. It was now 2pm and the tide was at its lowest and the number of tourists was at its highest. People were walking everywhere, all over the mudflats, along the shores and Chesil Bank was crowded. We walked some way along the fleet in order to scope the birds which had been ‘pushed’ quite a distance by ignorant people who were walking on the mudflats. 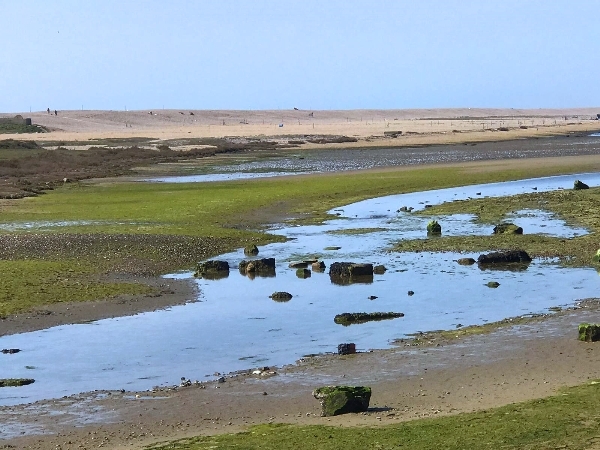 I found a small flock of Ringed Plovers, a single Eurasian Curlew, a Common Redshank and a pair of  Red-breasted Mergansers, they were all new for the March list. Next we visited part of Portland Harbour, we parked near Ham beach on the south side of the harbour next to a Lidl’s Store, Dawn went shopping for bits and pieces and I scanned the harbour. Amongst the Wind Surfers, Canoeists, Sailing Boats, swimmers, dogs and dog owners I saw a flock of 30+ Red-breasted Mergansers, lots of gulls, a single European Shag and a Rock Pipit on nearby rocks. 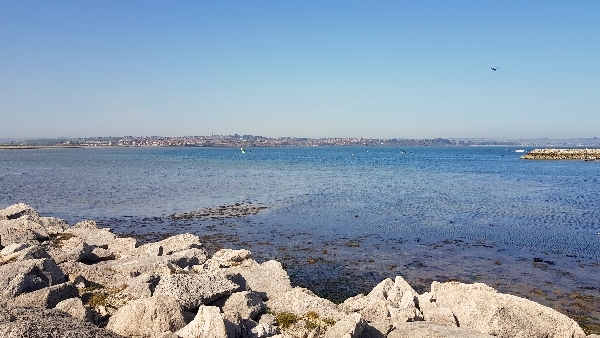 Just before we left a Sandwich Tern came over us and became my last tick of the day. Dawn brought back a box of three Magnum Ice-creams, a new variety called Ruby something, don’t try them, they are awful, I had to eat two of them to convince myself that they were flavourless rubbish and they are! We drove back home arriving at 4:30pm,

Fez had called, he’d eaten the seeds left for him, and he left us a 'thank you' deposit on the door mat!!