ALL DAY VISIT TO THE SOMERSET LEVELS

I’m getting quite used to being out of lockdown and  ‘off the leash’. For the third day running I went off ‘patch’ for some excellent birding. Dawn and I set off before 9am and headed to Ham Wall RSPB Reserve on the Somerset Levels. You know you are going to have a great day out when you visit these fantastic marshlands and today was no exception. 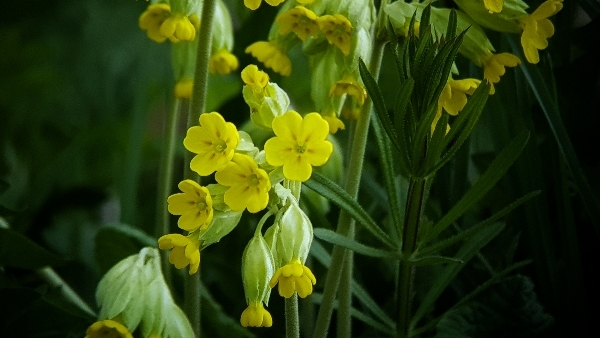 our first Cowslips of the year, seen in the car park at Ham Wall

In the main car park we were quite sheltered from the wind and it felt quite warm, the bird song was the best of the year so far, we could hear Chiffchaff, Blackcap, Cetti’s Warbler, Robin, Song Thrush, Blackbird, Blue & Great Tits and a Wren. Wherever we went for that first hour we could hear Great Bitterns ‘booming’ from all directions in the vast reedbeds. 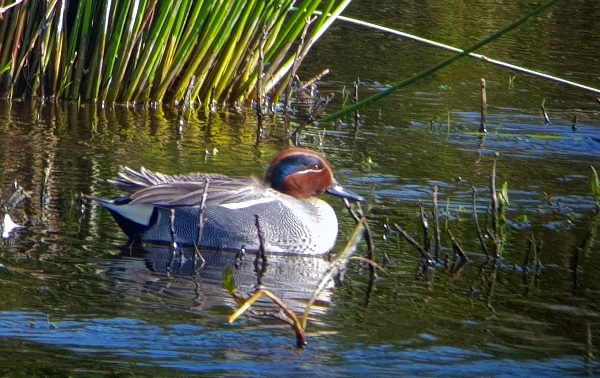 We headed across to Shapwick Heath because yesterday there was a male Garganey in the Meare Heath Pool along the way we saw Cetti’s Warbler, Blackcap, Willow Warbler, Chiffchaff and many common woodland species. In the pool at Meare Heath we listed: Tufted Duck, Shoveler, Gadwall, Wigeon, Mallard, Little & Great Egret, Mute Swan, Cormorant and Common Coot. There was no sign of the Garganey Duck so we continued along the main ‘drain’ to Noah’s Lake. 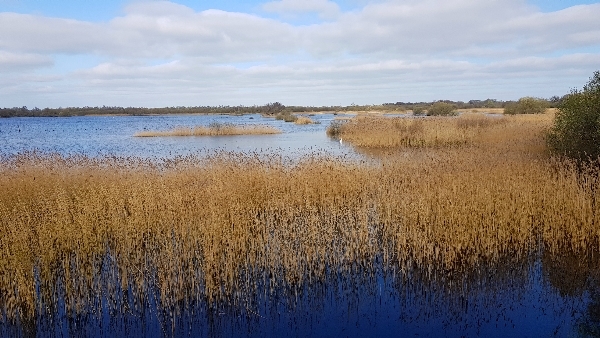 A view of Noah's Lake from the hide

In the woodland along the shore of the Lake we saw Great Spotted Woodpecker, Long-tailed Tit and to my great delight a couple of Redpolls were feeding in the willow trees. 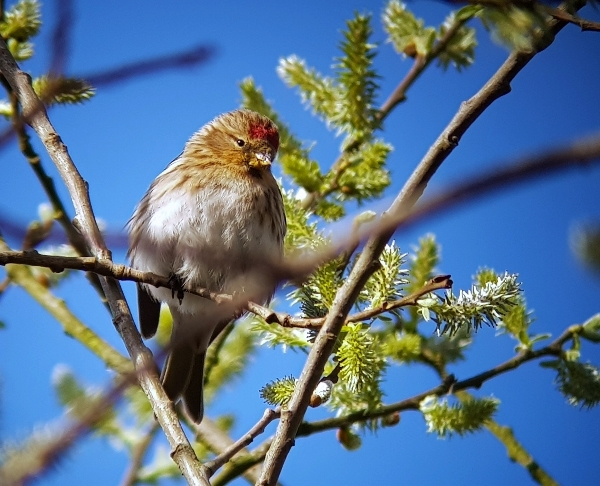 my bird of the day Common Redpoll, a female

From the raised hide at Noah’s Lake we spent a lovely time looking over the water which was loaded with many ducks, geese, swans and above the water there were hundreds of Sand martins with a few Barn swallows. The lake was alive with movement, colour and noise. Just below us a sheltered area of water was full of tiny fish and a huge Pike was chasing around after them. All of a sudden a huge swarm of the tiny fish would jump out of the water followed by the huge Pike with gaping mouth, I tried to capture the action on video but failed miserably. 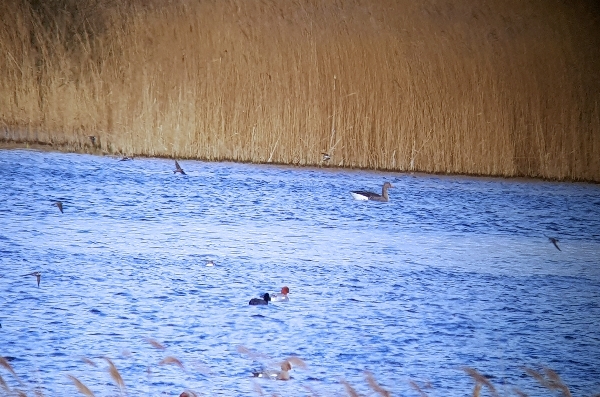 A Greylag Goose with Wigeon, a Coot and at least six Sand Martins are in this picture

We searched for an Osprey which was not forthcoming, despite this we had a wonderful time watching the hundreds of ducks on the water, we added Greylag and Canada Geese to the list as well as Grey Heron, Common Pochard, Moorhen and we saw more Marsh Harriers. 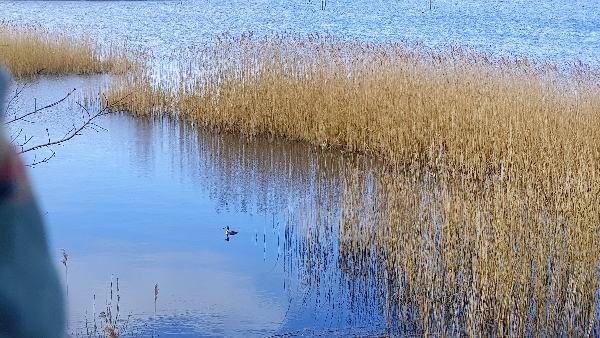 the sheltered water below the hide with a Great Crested Grebe

Back at the car park we stopped to buy a drink before we set off along the main track into Ham Wall Reserve. All along the track we heard more warblers in song, I also heard a Water Rail and from the Viewing Platform number 1 we added Northern Lapwing and Northern Pintail to the list. We continued to Viewing Platform No. 2 missing out a visit to the Avalon Hide which was still closed because of covid. More Harriers appeared and more Bitterns ‘boomed’ but not one of them showed. 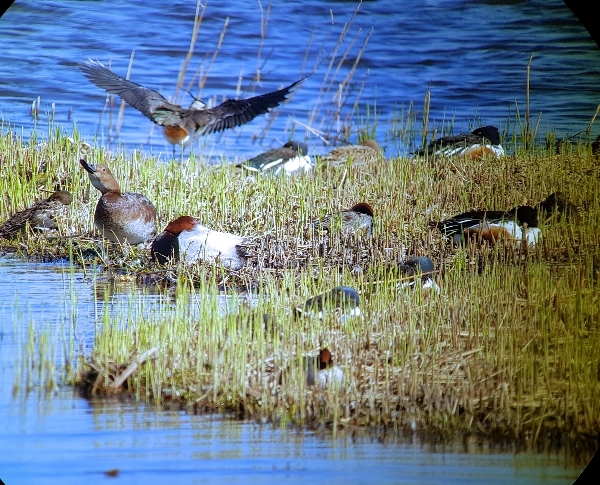 From VP No. 2 we added Common Snipe to the list and we watched many of the species already mentioned. We made our way back to car park and along the way we saw two Black-tailed Godwits on the first pool. 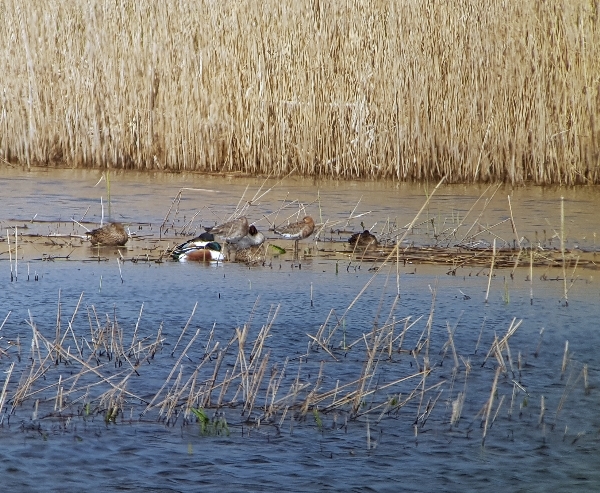 two Black-tailed Godwits, unfortunately they are both fast asleep.

where we collected our picnic and sat on a bench overlooking a small pool. We then saw a Grass Snake swimming across the pool and the warmer weather had coaxed out a number of butterflies, Dawn spotted our first Orange-tip Butterfly and then we saw both Large and Small Whites as we as Peacock and Red Admiral. 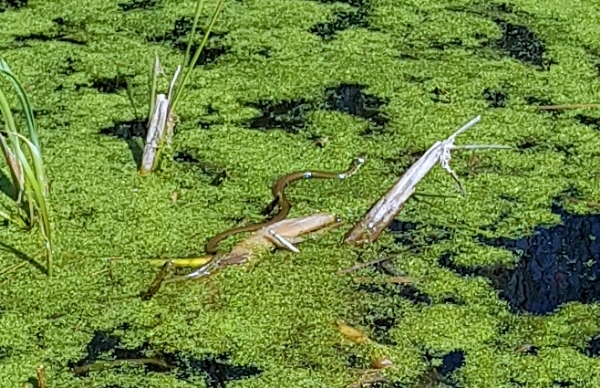 A Grass Snake swimming across the pool

After lunch we set off in search of Cattle Egrets, we drove to Tealham Moor and then to Mudgely, we struck a blank in both places, so our last resort was a trip to Catcott Low RSPB Reserve, where the egrets are usually found. 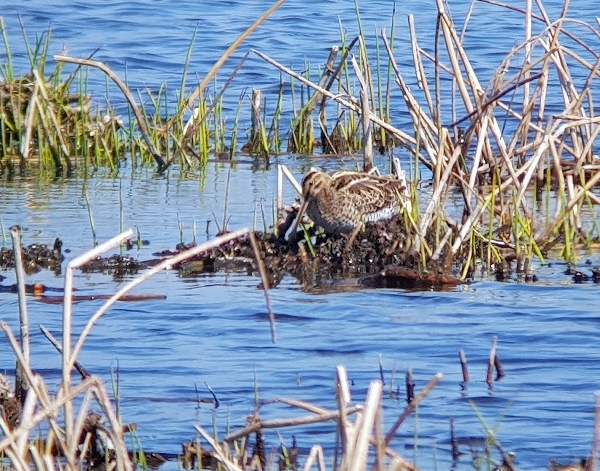 No Cattle Egrets this time, only two Little Egrets were present. The pool in front of the hide was littered with Eurasian Teal, a few Shoveler, a couple of Eurasian Wigeon and in the distance two male Pintail were feeding. Then I spotted a single wader, it was a Ruff which was a good sighting for the levels and then I found a dodgy looking Teal. It had the wrong head shape, colour and bill shape but looked nothing like any type of Teal I know. It was probably a hybrid of some kind. Later, at home, I checked websites and found similar looking birds which were Chiloe Wigeon crossed with Eurasian Teal!! 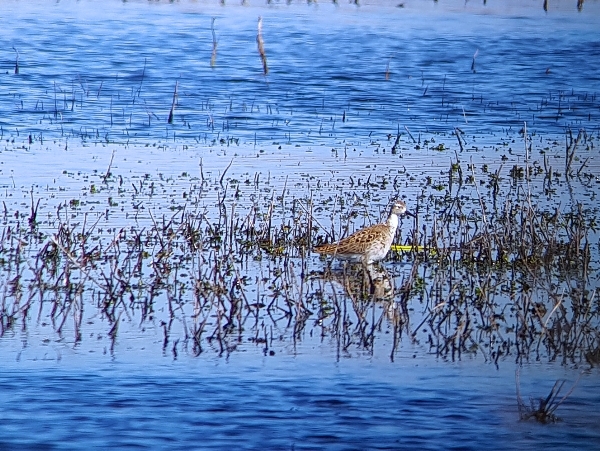 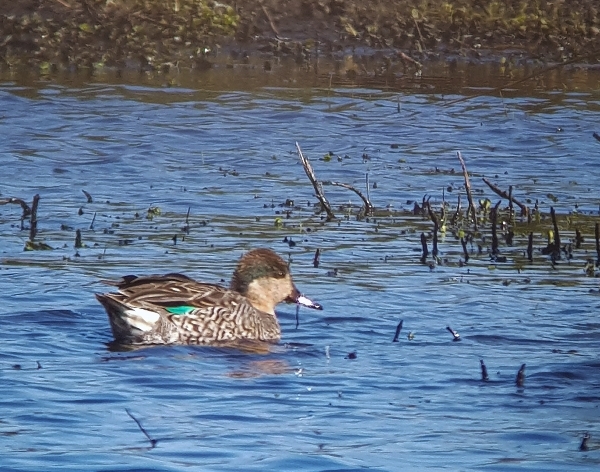 Back at home by 4pm completed our day out, we saw Fez the Pheasant in the garden, Green Woodpecker and Red-legged Partridges in the meadow and a cup of tea/coffee in the kitchen!